A city the size of Woodinville is sleeping in our streets 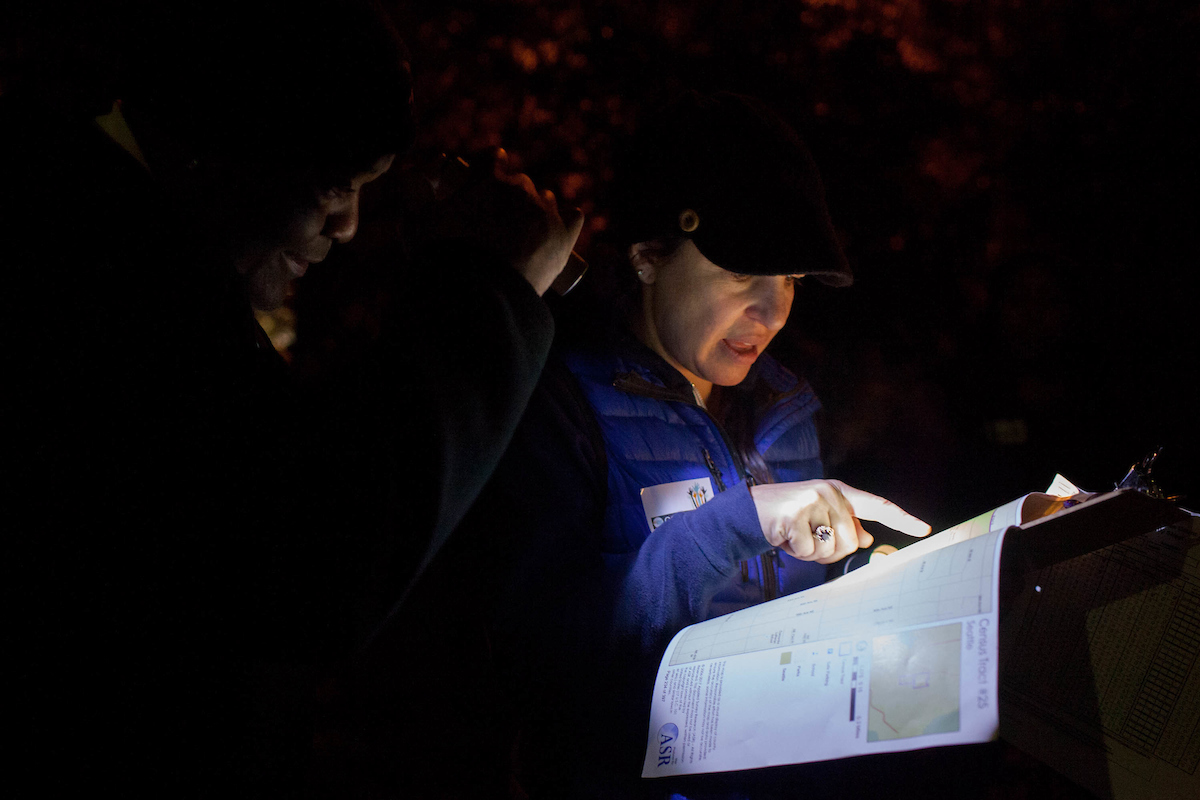 The homeless numbers are in: The population of people living out on the streets of King County continues to grow, a frustrating and sobering confirmation of the reality any Seattle resident can see throughout the city.

The county’s annual tally, taken early in the morning on January 27, found 5,485 people living unsheltered on the streets, in parks, in encampments or in vehicles. Combined with those who spent the night in shelters, the total homeless population was 11,643. That’s the equivalent of the population of the town of Woodinville.

The street count shows a 21 percent jump from last year, a 47 percent jump from 2015 and a 76 percent increase from 2014. But at the press conference announcing the numbers on Wednesday, officials were quick to warn against direct comparisons between this year's count and previous ones.

The survey was conducted differently this year than in the past, and the two approaches were "apples and oranges," according to Mark Putnam of All Home King County, which partnered with the California-based Applied Survey Research to conduct the count.

Unlike in previous years, volunteers were paired with formerly homeless people to seek out hidden corners of the city. Participants fanned out over a larger swath of the county than in the past. And where the count of youth homelessness was formerly separated from the total tally, this year’s count combined the two. It was always assumed the number would come back higher.

However, public officials lean heavily on the numbers that come from this annual count, which is required by the federal government. And regardless of how the survey was conducted, it’s clear that the problem is even larger than what had been assumed over previous years.

Counting those without homes can feel like an imprecise exercise: Thousands of volunteers march from block to block in the early and dark hours of the morning. To count people living in their cars, they look for condensation on the windows, a particularly challenging task this year as cold fog lingered.

Still, officials with this year's survey worked with those who had either lived on the streets or who had worked directly with people who had. In one group, a man named Oz Palmer, who had conducted outreach in Seattle years before, knew to look in a schoolyard and in a North Seattle parking garage for unsheltered individuals.

This year’s results returned with more data than in years past. Through more detailed questioning of just over 1,000 individuals, surveyors were able to glean more from those in shelters and from those on the street who were willing to talk.

As has been shown in other surveys, the narrative of “Freeattle” — that homeless people move to Seattle for its services — does not hold up: 77 percent of respondents reported living in King County at the time they became homeless. That’s not to say all of these people were born and raised here, but their reasons for coming to the city more likely had to do with work or to accompany a partner than to take advantage of homeless services.

This is more obvious in the responses for why many lost their homes: About half cited some change in housing or economics, including losing a job, being evicted from their home or separating from a partner.

That's what Don, sitting outside of Downtown Emergency Services Center, said happened to him. Until just a few weeks ago, he says he lived near Harborview. "Funds ran out," he says for why he had to leave. Don, who declined to give his last name, is disabled. He's staying in a shelter until June 1. Then, he says, "I'll get some money and get the hell out of here."

The barriers to getting out of homelessness are the same challenges facing every person in King County. Three-quarters pointed to the lack of affordable housing. Low incomes, moving costs and/or a cumbersome housing process were cited as factors by nearly half of respondents. Don is hopeful that he'll be able to find a place, but acknowledges it's difficult, especially in Seattle. "I may have to go to Tukwila," he says.

The solution is, in some ways, painfully obvious: Ninety-two percent of the respondents said they would move into “safe and affordable housing” if it was offered. "We need more housing that people can afford," said Putnam.

Some of the numbers, while deeply unfortunate, are not surprising.

Nearly one-third of the homeless population is African-American, which is hugely disproportionate to the 6 percent total African American population living in King County. Six percent of those counted are Native American, compared to the smaller than one percent King County population.

Among youth, 28 percent reported as LGBTQ. It’s difficult to compare that to any baseline number, but it’s widely accepted that the number is out of step with the broader LGBTQ population.

Seattle, home to three-quarters of the county’s homeless population, is in the midst of reshaping its approach to homelessness. Chief among the proposed solutions is to place people more directly into permanent — not transitional — housing.

The concern, however, is how effective this approach would be for people who have been homeless for a long period of time. And according to the data, that’s a lot of people: 59 percent have been without a home for one year or more. And nearly 3,000 individuals experience “chronic” homelessness, meaning they’ve been in and out of homelessness for many years and are struggling with chronic health problems.

Still, officials say they are already seeing positive results as they create more 24-hour shelters and double down on getting people into permanent housing more quickly. Most notably, the number of homeless families living on the streets has dropped to only 3 percent as organizations like Mary's Place receive more funding from private corporations like Amazon and focus their efforts on the family population.

Without doing more to prevent homelessness, however, the county will never get ahead of the problem: 7,500 families were moved into permanent housing, according the Wednesday's data, and yet the total number still rose. The door is revolving too quickly.

"As fast as we’re getting people out, people are coming in," said Adrienne Quinn, Director of King County's Department of Community and Human Services.

In addition to the new approach, Seattle and King County have announced plans to push a sales tax hike to fund homelessness. If approved, the measure would bring in $68 million in 2018, scaling up every year to $94 million in 2027.