Pike Place Market gets a front porch for the future 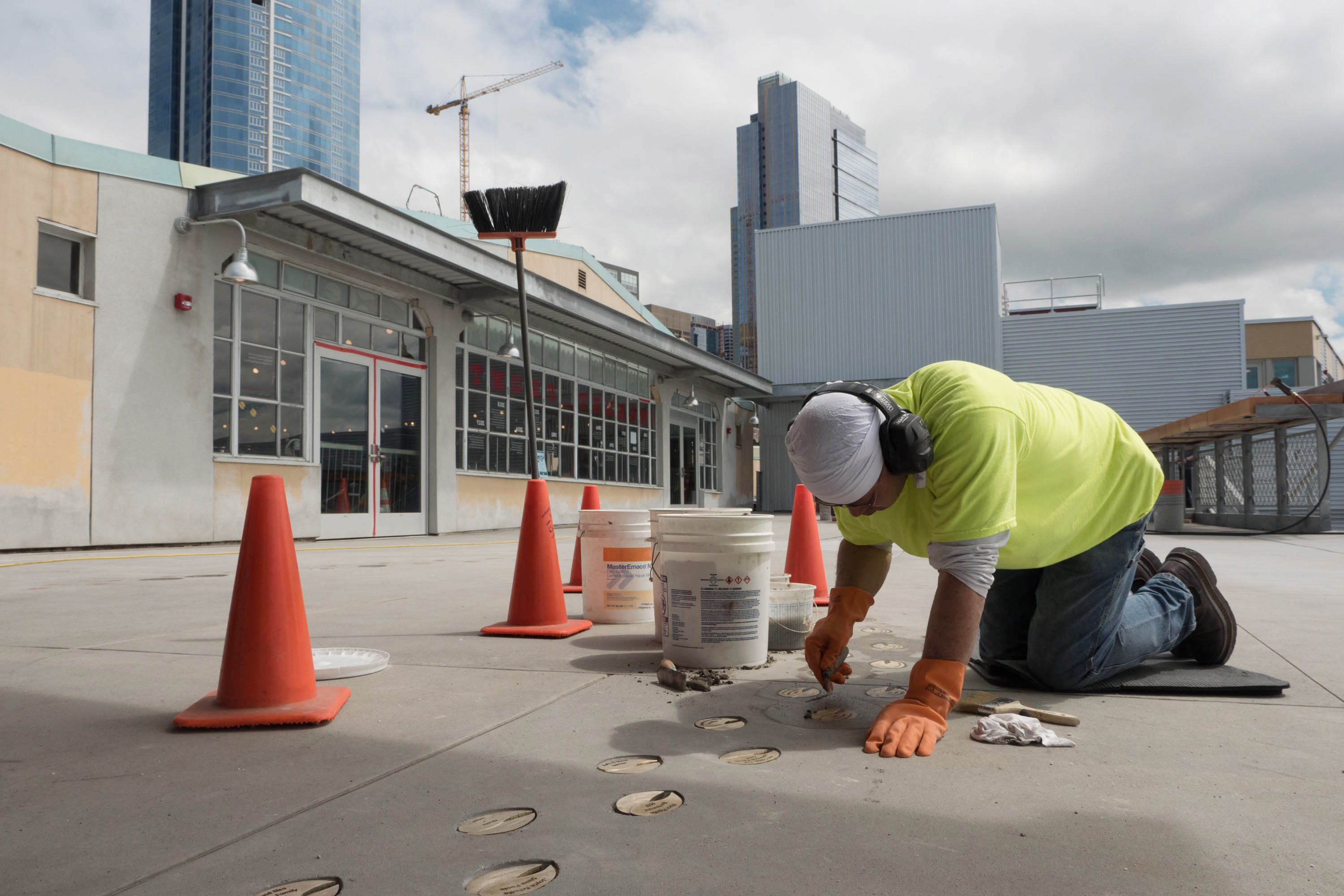 A construction worker adds donor-name hoof prints to the ground on MarketFront at Pike Place Market.

The last piece of Pike Place Market is starting to fall into place. The new development, the MarketFront, will eventually connect to the waterfront, touching down by the aquarium. But that linkage will have to wait a couple of more years — until the Viaduct is demolished.

In the meantime, the Market has a grand new front porch overlooking the bay. And a glorious one at that.

When I first saw Seattle in the mid 1970s, the renovation of the Market was fully underway. Saved from demolition by a citizens initiative, Pike Place Market would be rehabilitated to meet contemporary building codes and standards. However, little of the original public market would be visually different. I recall the late George Bartholick, one of many architects involved in the renovation, explaining, "They would bring everything back as it was, except for the grease on the walls.”

Today, of course, the Market is revered as a landmark and the living symbol of Seattle’s urban soul. But for many years, the site of the new facility on the westerly, downhill side of Pike Place Market seemed to resist any substantive change. Ever since the old Municipal Market building in that location burned down in the early ’70s, it was simply an ugly surface parking lot.

Now, this difficult site has been entirely transformed while achieving multiple objectives.

When the Market was opened in 1907, few people wanted to look at the waterfront. It was filled with steam-belching freighters, crisscrossed with freight trains and track, and generally a place of industrial chaos. Such was the “working waterfront.” We also tend today to forget that much of Elliott Bay was essentially one massive sewage pond — not pleasant to be near at all.

Now people seek out the magnificent views of ferries, cruise ships, sailboats, a sparking bay and, of course, the spectacular Olympic Mountains in the distance. There always seem to be hordes of tourists and locals marching Western Avenue to get to the current viewpoint in Victor Steinbrueck Park.

MarketFront will vastly add to the places for photo ops, lingering and gaping at the expansive and ever-changing harbor. The architects from Miller Hull skillfully designed a series of broad ramps and passageways to stroll along. They comprise an elevated perch that seems to hover in the air above the shoreline. This public space will connect with the adjacent Steinbrueck Park as well as directly to the street.

In addition, the project adds space for more merchants. Permanent tenants will occupy a great hall, with a visor-like roof tipped up toward the water. Locally made foods will be sold in open stalls where both the process and products can be seen. The pavilion will also offer sheltered space for small vendors that now line the exposed section of Pike Place, south of Virginia. It will at long last connect with the stub end of the Desimone Bridge, which has for decades been a cantilevered dead end. The entire complex should shortly team with people, sounds, music, and small-scale home-grown commerce.

The structure, which links the west side of Western with the main market, provides a broad, lively window toward the rest of the world, with scenes of ships unloading at the port with products from all over the globe contrasting with the human interactions of people eating, making purchases and observing things being made. It’s a terrific reminder of our deeply-rooted connection with other countries and cultures.

One of the best attributes of MarketFront is that is adds to the supply of affordable housing. Forty low-income apartments are snugged up against the public spaces of the project. The small apartments, all quickly leased, are already rapidly filling up. Facing the bay, there are a handful of live/work units available to low-income artists to both make and sell their work. Small terraces spill out onto the public walkway and offer an exposure to working artists.

Architect Peter Steinbrueck has been involved in advising the Public Development Authority  for years on the development of this difficult site. He credits PDA Executive Director Ben Franz-Knight with unlocking the conundrum and resolving disagreements with various parties associated with the project.  Notes Steinbrueck, “The subsequent outcome is the best I could have hoped for.”

Other public markets around the country are gradually losing their roots as places where all sorts of people can feel comfortable and participate in public life. Some markets many have slipped into monocultures — appealing mainly to unending parades of tourists seeking inexpensive trinkets. Others have resorted to bringing in high-end, brand-name retailers and restaurants to compete with malls. A mere handful of public markets — like Pike Place, the Reading Market in Philadelphia, and the Lexington Market in Baltimore, and the Eastern Market in Washington D.C. — have taken great pains to resist this unfortunate trend.

Pike Place Market continues to be an authentic part of Seattle, blending a heritage of family-run, home-grown, small-scale capitalism with a healthy attitude of caring for people with varied needs and with a sense of public spaces that are open to all. It continually reminds us of our humanity and the importance of community, which seems to have been recently diminished on the national front. MarketFront does a superb job of carrying the best of our past values into the future.