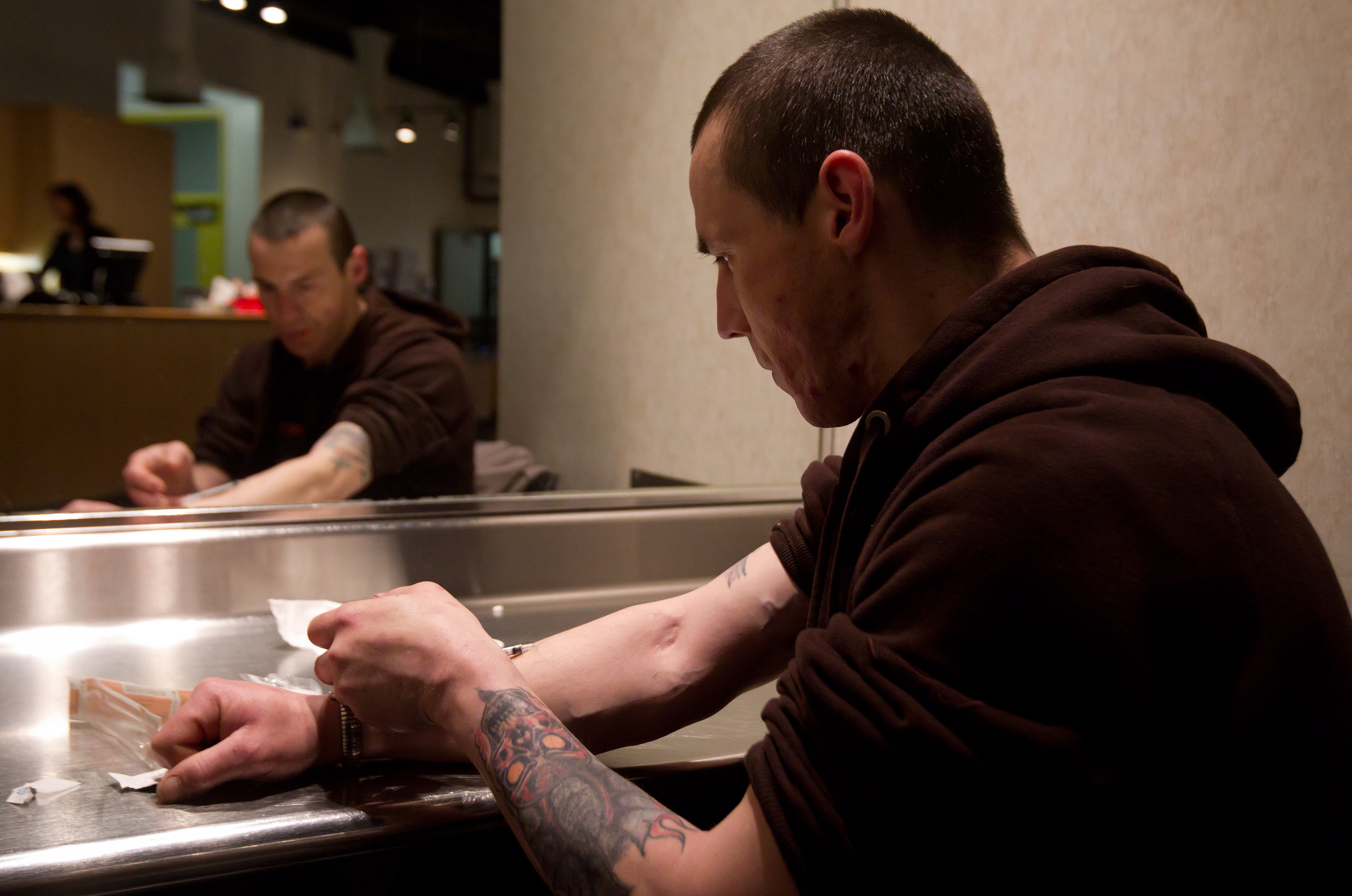 Richard Chenery injects heroin he bought on the street at the Insite safe injection clinic in Vancouver, B.C.

Worried about rising deaths of opioid drug overdoses, King County Council members appear to be moving toward approval of a program for two safe-injection sites.

The task force recommended establishing two facilities that would allow indoor opioid use as a way to assure people don’t die alone from overdoses. The group said that the sites, to be closely supervised by healthcare professionals, should be in Seattle and somewhere else in the county. Ideally, the task force believes, they should be in areas where outdoor drug use is already focused. Seattle Mayor Ed Murray and County Executive Dow Constantine support the sites.

After chairing a committee hearing on the proposal Tuesday, Councilmember Jeanne Kohl-Welles said she is supportive of the safe-consumption sites and thinks they’re worth trying as long as the pilot process is very controlled and evaluated throughout.

Kohl-Welles said a number of relatives have been impacted by opioid use, including one in treatment and another who died of a recent overdose. “It’s an epidemic,” she said.

The proposal has been the target of criticism from some residents and state legislators, and an initiative is planned to block establishment of the sites.

At the Tuesday hearing, more than 40 people commented, including perhaps a handful opposing the sites. A handful of the commenters opposed the sites, including Speak Out Seattle!, a self-described grassroots coalition generally based in the north end areas of Queen Anne, Greenwood, Magnolia, Ballard and Phinney. The opponents argued that the sites will enable drug use and prevent users from seeking treatment.

The initiative, announced last week, aims to ban safe-injection sites altogether. State Sen. Mark Miloscia, R-Federal Way, is involved with the initiative, and says he doesn’t support the sites because he believes they will increase overdoses in King County.

Miloscia said he thinks the best way to handle the opiate crisis is to increase intervention strategies and immediate treatment options. He said he doesn’t see any benefits to safe-consumption sites and thinks they would constitute the “de-facto legalization of drugs.”

“We should not tolerate people committing slow suicide with this drug use,” Miloscia said.

Miloscia said he expects voters will “overwhelmingly reject” safe-injection sites. Backers have said they need some 47,000 signatures to get their initiative on the ballot in November.

County Councilmember Rod Dembowski described himself during the hearing as an “advocate of being a little creative.”

“One person in King County every 36 hours dies from an overdose,” Dembowski said at the hearing. “This is an all-solutions on deck emergency as far as I’m concerned.”

Dembowski, who voted for the sites when they were reviewed by the board of Public Health-Seattle & King County in January, added that concerns opponents raise over the potentially negative effects safe-injection sites could have on the neighborhoods are legitimate, and it’s important to address them.

Task force co-chair Brad Finegood said safe-injection sites, often referred to as Community Health Engagement Locations, or CHEL for short, would cost $2 million at most, making up about 1.5 percent of the current $132 million spent locally for substance disorder programs.

Finegood said that the 1.5 percent would be spent on the most vulnerable population of users, adding that, for the most part, the county’s current programs are generally aimed at helping people who are already seeking treatment, either on their own or with the help of a loved one.

He said that because the injection sites would be located in neighborhoods with already-existing high levels of outdoor drug use, they are unlikely to act as a magnet for users from far away.

The Council expects to resume public discussion of the proposal until early June. In the meantime, some councilmembers are planning to visit Vancouver, British Columbia, to see Insite, the only safe-injection site in North America.