Who should police the police? 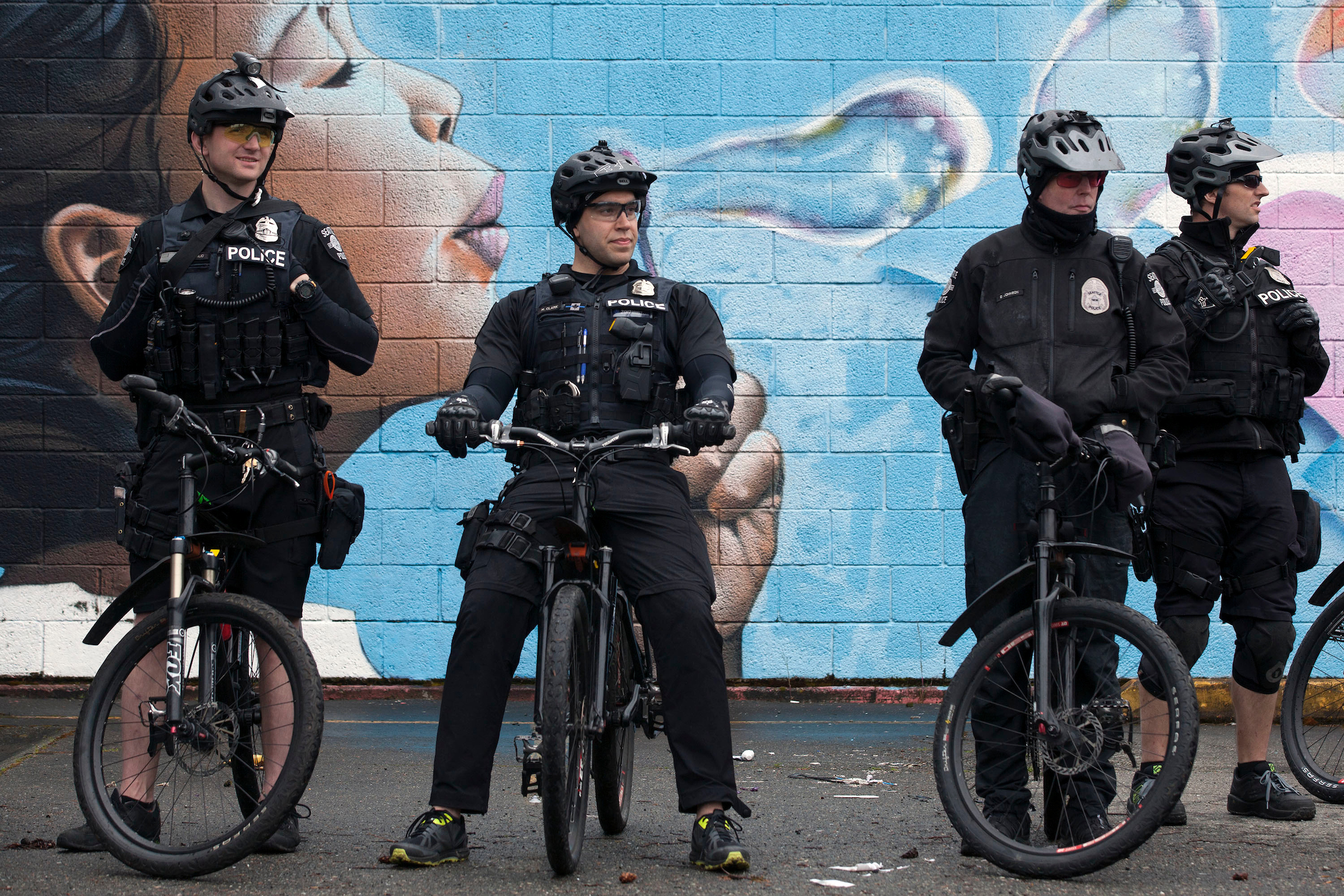 Police during May Day demonstrations in Seattle on May 1, 2017.

After being at the center of the five-year effort to reform the police department, the Community Police Commission faces big questions about its own future.

What role will the community — and the commission — have as the reforms are shaped for the long term? That question can’t be asked without answering another: Who is the community? Is it, for example, a person who lives in Seattle, perhaps representing one of Seattle’s seven districts? Or is it also those who may live on the city’s edges but work within Seattle?

In a letter sent to the Seattle City Council last Friday, City Attorney Pete Holmes put those questions and others in stark terms, arguing for significant changes in reform legislation that the council is about to vote on.

He wants limits on the make-up and powers of the Community Police Commission (CPC) — a body that he would essentially see, as he put it in his letter, as a “megaphone” for residents’ concerns about police behavior or practices. The letter assuredly drove a final stake in the heart of his relationship with the Community Police Commission, which has looked for more expansive powers. And it sharpened a big question before the Council: Should the CPC carry the weight of direct influence, deciding what will be investigated or appraising whether others are properly doing their jobs?

As the myriad parties involved in police reform make their last-minute pitches before a final Monday vote by the Seattle City Council, it's unclear what their pleas can or will influence at this point. But even once the final accountability legislation passes, the reforms still need to go to federal court and the collective bargaining table. If the history of the reform process is any indication, each vested interest will fight for what they want until the final bell.

Since Seattle entered into an agreement with the U.S. Department of Justice to change the practices of the Seattle Police Department, that role of citizen representation has been played by the Community Police Commission. It’s made up by lawyers, advocates, service providers, faith leaders and even a few cops.

As fulfillment of the agreement comes into view, the future of community representation is muddy: Technically, until legislation is passed, the Community Police Commission will vanish with the end of the reform agreement.

It’s highly unlikely that will happen — city officials agree that making the CPC permanent is a good idea. But what permanency means is still unclear, despite years of backroom debates and months of public ones before the Seattle City Council.

The issues Holmes raises are antithetical to nearly everything the CPC would like. He argues the that the commissioners should be required to live in Seattle and specifically represent Seattle districts so it's “comprised of and responsive to the communities it serves.” The CPC disagrees, arguing that approach excludes those who cannot afford to live in the city but may work and spend much of their time in Seattle.

Holmes argues the CPC should be a conduit for community voices and go where the “community’s” opinions lead them, pointing specifically to the disconnect between the commission’s skepticism of body cameras and the device's high public favorability numbers. The commission should not, he writes, “be a bureaucracy staffed by ‘subject matter experts.’ ” The legislation as it’s currently written, however, demands of commissioners specific experience with law enforcement, police accountability, law, social justice and other subject matters.

He also maintains, as have members of the City Council, that the elected officials who hire heads of the department's oversight agencies should also be the ones to do their performance reviews. The CPC has argued that their body should have that authority to protect those hires from retribution down the road.

Holmes’ letter inserts the City Attorney into the debate at a time when he need not do so: The makeup of community influence is in the hands of the Council now, before it then goes to the court and then to the bargaining table with the police unions. Holmes had a larger hand in its earlier stages.

At a Tuesday evening hearing, the CPC made one final pitch for their specific slate of amendments before a Thursday morning vote on the final package. They once again pushed Councilmembers Lorena Gonzalez and Tim Burgess to consider allowing non-Seattle residents to serve on the commission; to allow the CPC to directly influence the work plan of the soon-to-be-established Inspector General, who will do department-wide audits; to let them do performance reviews; to provide the commission with greater insight into collective bargaining negotiations; to set up a “system of redundancies” in oversight.

And most of all, to fund oversight.

The structure of police accountability is only one piece of the long reform process, which also includes changes in police training and practices. But with the uncertainty of collective bargaining and new City Hall administrations, it's a system of oversight that will ensure the department doesn't backslide. As a result, the question of how to structure accountability can sometimes feel like the most important reform. Or, as CPC commissioner Isaac Ruiz said Tuesday, this legislation represents "accountability over the accountability system itself."