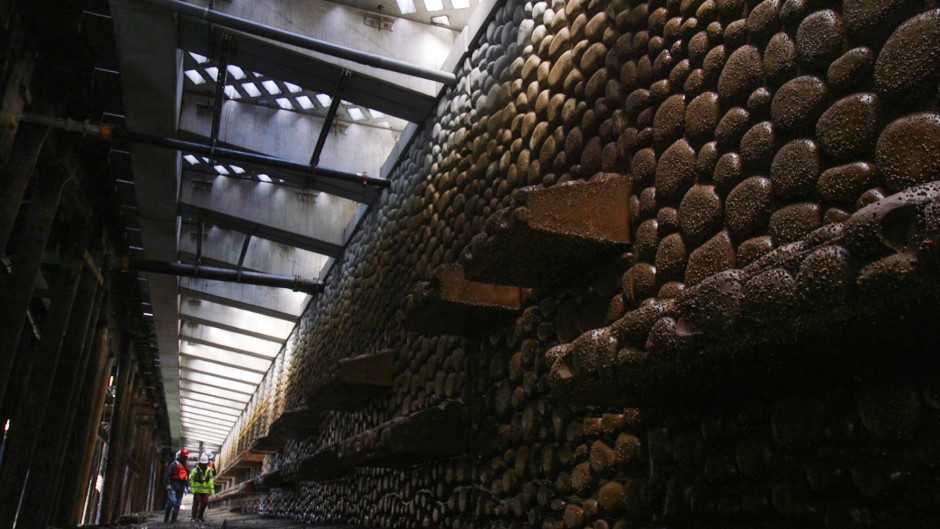 “Brown scum,” he said on a recent visit at low tide, running a gloved finger through a carpet of slimey growth. “We love to see that. This is really good stuff.”

For Cordell, it’s an early sign that the tourism hub is soon to become a more attractive stopover for natives, too — in this case, hundreds of thousands of juvenile salmon that frequent the city’s shores each spring.

The brown scum is growing on Seattle’s newly constructed seawall, a $410 million infrastructure project that’s doubling as a massive science experiment. Cordell is testing whether coastal cities can better coexist with fish by building marine habitat into their shoreline defenses.

“Nothing has ever been tried on this scale to improve seawall habitat for fish,” said Cordell, a fish biologist at the University of Washington and lead scientist on the project.

For 80 years, the Alaskan Way seawall was like most: a smooth, vertical slab of concrete that held back the sea for the city’s bustling waterfront. It helped cement Seattle’s status as a commercial hub and deepwater port, but also sealed the fate of salmon habitat, locking away miles of gradually sloping beaches.

Hundreds of thousands of young chum, pink and chinook salmon face precarious conditions every spring while migrating north from Seattle’s Duwamish River to the Pacific Ocean, where they spend adulthood.

As they exit the mouth of the river, biological hardwiring pushes them up against the shoreline and through a maze of towering wooden piers that cast shadows across the water below. The baby salmon struggle to navigate between light and dark areas, and the deep water offers few traces of a typical juvenile salmon diet, according to previous research.

“They have no place to do their normal feeding and growing,” Cordell said.

The new seawall should make life easier by featuring an underwater corridor for the fish to pass through on their way to the ocean. It’s illuminated by glass tiles in the pedestrian sidewalk above and filled with rocky surfaces where microalgae and small marine invertebrates are more likely to survive.

If the habitat features attract fish, it could inform future seawall construction around the world, which is expected to increase as sea levels rise in the coming decades. Ocean levels could rise up to six feet globally by 2100, according to a March 2016 study in Nature, and local waterways are expected to climb between 4 and 56 inches during the same period.

“The effects might not be as extreme as a place like Washaway Beach, but we expect some pretty rapid erosion in most places in the region,” said Hugh Shipman, coastal geologist at Washington’s Department of Ecology.

Seattle’s seawall is only one effort being made to restore shallow habitat across the region.

About a quarter of Puget Sound’s 2,500 miles of shoreline are modified with bulkheads, riprap or other shoreline “armoring” structures. They’re more common in densely populated areas, like King County, where two-thirds of beaches have some kind of anti-erosion defenses.

As sea levels rise relative to those structures, shallow beach habitat will get squeezed out, Shipman said. In recent years scientists and activists have pushed to remove these structures and “soften” shorelines instead, restoring beaches, marshes and “living shorelines” in their place.

“Seattle’s seawall is an extreme case because there are few options for getting that habitat back—it has to be heavily designed to work in that very artificial setting,” Shipman said. “There are a lot more options in less developed areas.”

But Shipman said if rising seas exceed projections in the future, fish habitat may become the least of our concerns.

“We’ve never had a time where average sea level came up a few feet in such a short span of geologic time, and there’s no evidence that it would stop at 2100,” Shipman said. “At a some point, all bets are off.”

Questions remain about the $13 million worth of habitat improvements along the seawall, too.

In 2018, Cordell will begin a monitoring project that could last a decade, trying to determine if the man-made habitat helps improve life for fish. On a recent visit to the waterfront, Cordell measured light levels at 3 percent of normal below the cantilevered, glass-tiled sidewalk. He ran his finger along a recently installed section of seawall, and it came up dry.

“Even brown scum needs a good amount of sunlight to grow,” he said, looking at the bare face of a newly installed panel. “We’re going to learn a lot doing this.”

Why you should plant your neighbor's seeds