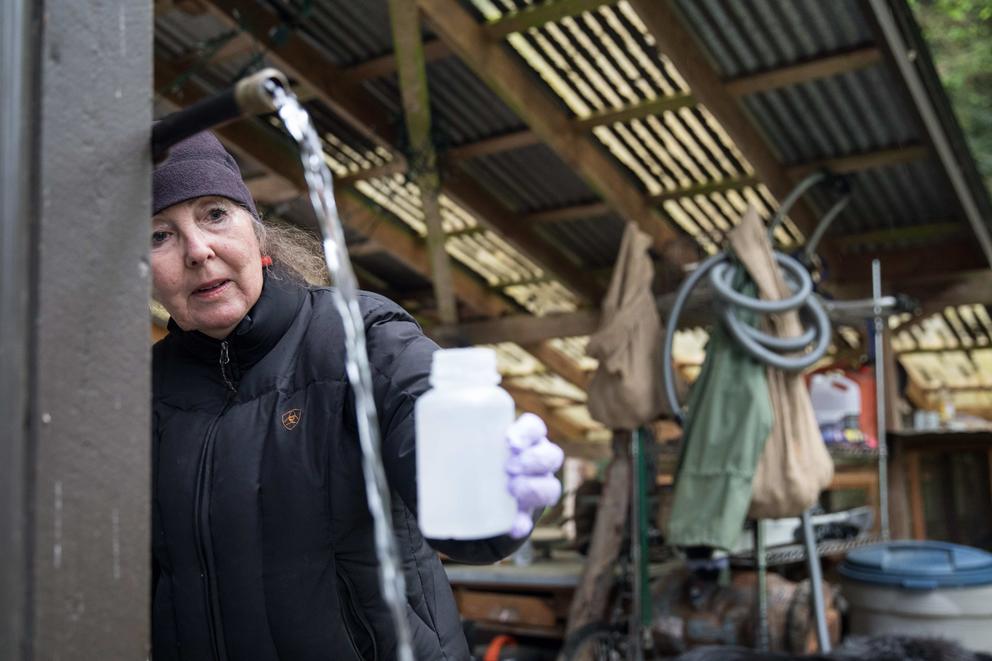 Catherine Andrews of Coupeville collects water samples from her well to be tested by an environmental group concerned about the Navy's limited response to the discovery of contamination by firefighting foam.

Wearing gloves that barely fit, Garry Stone slipped two small, square-shaped bottles, one after the other, under a stream of water from his well. After packing the bottles on ice, the Whidbey Island resident took them to join samples from 40 other households also collecting their own water for testing.

They all want to know what, exactly, is in their drinking water.

They are worried about long-lasting synthetic chemicals that seem to have spread from Whidbey Island Naval Air Station into nearby wells. The chemicals — perfluoroalkyl and polyfluoroalkyl substances commonly called PFAS — have been linked to certain types of cancer, low birth rate, immune system issues and high cholesterol levels.

Beginning in early December, residents of Whidbey Island, living near the Navy airfields in Oak Harbor and Coupeville, have watched blue jugs of bottled water appear on almost a dozen neighbors’ porches. The jugs were delivered by the Navy after their wells tested above the Environmental Protection Agency’s advisory level for chemicals found in firefighting foam.

There are no routine water quality testing requirements or clean-up standards for PFAS. This leaves local municipalities and agencies, like the Navy, to formulate their own plans after these chemicals are discovered. Some are more proactive than others.

PFAS have now been found in water systems that serve almost 100,000 Puget Sound residents. In Issaquah, where it was found in relatively significant quantities, the city developed its own $1 million testing program to identify the source of contamination. In the state Legislature and Congress, municipalities and people affected by the chemicals have sought help on how to respond.

Since October 2015, the Navy has been aware that a well on a Whidbey Island airstrip was contaminated with levels of PFAS 146 times above the recommended limit (since that test was conducted, the EPA has lowered the advisory limits further). At the time, the Navy determined that off-base residents were not potentially impacted by the on-base contamination due to the southwesterly flow of groundwater back toward the base, according to Mike Welding, a public affairs officer for the Navy.

But the chemical did begin to migrate off base.

Firefighting foam containing PFAS, was developed by the Navy in the 1960s to rapidly coat a fire, separating the flames from the fuel. Over decades of use of the firefighting foam, also known aqueous film-forming foam, by the Navy, major airports, oil refineries and civilian fire departments, the chemical is being discovered in drinking water across the globe. These chemicals, used to repel both water and oil, are also found in carpets, nonstick cookware and fast food wrappers.

“These chemicals (PFAS) are in so many substances that it’s likely the contamination could have come from another source, but we do know it could have come from the use of AFFF [aqueous film-forming foam],” the Navy’s Welding said. “We know here on Ault Field where they actively train with it, they suspected they would find a large concentration of this chemical in certain areas. Which they did.”

Over a year after tests were first conducted near the airstrip north of Oak Harbor, the Navy began testing private wells in a 1-mile radius around the runway. Since PFAS remain unregulated by the EPA, he said, the Navy developed its own plan to test public and private wells within one mile from a known or suspected release point of the firefighting foam.

Dissatisfied with the Navy’s handling of the PFAS contamination investigation, a group — the Whidbey Water Keepers — gathered residents together to independently test their wells. Some participants lived outside the Navy’s testing radius.

Others, like Stone and his wife, Shannon, whose well was tested by the Navy, said they wanted an independent test done after learning a neighbor’s well exceeded the EPA guideline for one PFAS chemical by more than 35 times.

Welding said that due to privacy concerns, results from private wells would not be made public. He did confirm a well from a house in Oak Harbor, where the Stones live, was found to contain PFAS at 2,500 parts per trillion — the highest concentration so far found in a private well on the island.

According to results the Stones received  in December from the Navy, the PFAS level in their well was under the EPA advisory level, but just how much less was unclear from the information supplied. To get an exact number, the couple decide to participate in the Water Keepers testing.

Welding said the Navy has no plans for retesting wells with results below the EPA guidelines.

Joyce Dinglasan-Panlilio, Ph.D, professor of environmental science at the University of Washington-Tacoma, said sampling once is not sufficient.

“Your groundwater dynamic changes, your flow hydrology changes depending on the season,” she said. Sampling can be costly, Dinglasan-Panlilio continued, “but who wouldn't want to know all about where things are coming from, how things are changing?”

Dinglasan-Panlilio began studying PFAS after discovering the chemical in polar bears as a graduate student. “Probably the most scary thing we found is, every single human blood sample we have analyzed contains these compounds,” she said.

“These compounds are synthesized, we have no natural sources for them,” Dinglasan-Panlilio continued. “They should not be in our drinking water, period.”

The Whidbey Water Keepers say testing a wider area will also help establish the extent of the contamination plume, and should have been done by the Navy.

“For me as a farmer, it’s imperative I can look my customers in the eye and say ‘my is water is clean,’” said Linda Bartlett, an organic farmer in Coupeville, down the island from Oak Harbor.

Bartlett, one of the organizers of the independent testing, lives less than two miles from the Navy’s Outlying Field Coupeville, where three monitoring wells tested above the EPA advisory limit, and outside the testing zone established by the Navy. The Navy has yet to release specific levels of the PFAS found in those three wells, which were sampled on March 4.

“Some feel 70 parts per trillion is too high,” she said, referring to the current EPA advisory level. “I prefer our water to have a non-detectable” level of perfluorinated compounds.

In Issaquah, after PFAS was first found in 201 3 in a city well at three times the EPA limit at the time. Water from the contaminated well was always blended with water from another well, which dropped the PFAS amount at the tap below the EPA standard, the city said. In 2016 the city began a months-long investigation to determine the extent of the plume of contamination in the underground aquifer.

Nevertheless, Deputy City Manager Emily Moon said, “We took those results very, very seriously; we drilled six testing wells to try and pinpoint the plume. I’m not sure other communities would have done the kind of things that we did.”

The city spent almost $1 million on a water treatment system and monitoring, concluding the headquarters for East Side Fire and Rescue headquarters was likely a primary source of the contamination. But the next steps for the city remain fuzzy.

“Without [clean-up guidelines] it’s difficult for any party to ascertain how to go about the clean-up and to what extent the property needs to be remediated to be considered clean,” Moon said.

The city appealed to the state Legislature for guidance, traveling to Olympia to testifying before the House Environment Committee. They weren’t alone: State agencies have begun working on a chemical action plan, but the comprehensive study in development is a plan  not legislation or regulations. New Jersey and Vermont have established more stringent advisory levels of 40 and 20 parts per trillion, respectively.

At the federal level, the $1.2 trillion spending bill approved by Congress on May 3 includes language that encourages the military to “establish procedures for prompt and cost-effective remediation” of PFAS contamination.

The Navy continues its PFAS investigation as the base proposes an expansion, which could increase flights more than 31 percent. Many residents oppose this plan, citing health effects from the noise.

Steve Swanson and his wife Sandy, who live near the Coupeville field, say they aren’t anti-Navy, but do not feel the Navy has their best interests at heart.

This time last year, the Swansons were already eating lettuce from their organic garden. Their well is no longer usable after PFAS was found at a level six times above the current EPA guidelines. Without a usable well, the rows of dirt remain empty and untilled. They want the Navy to commit to using firefighting foam that doesn’t contain any PFAS.

The Swansons are frustrated by the inaction.