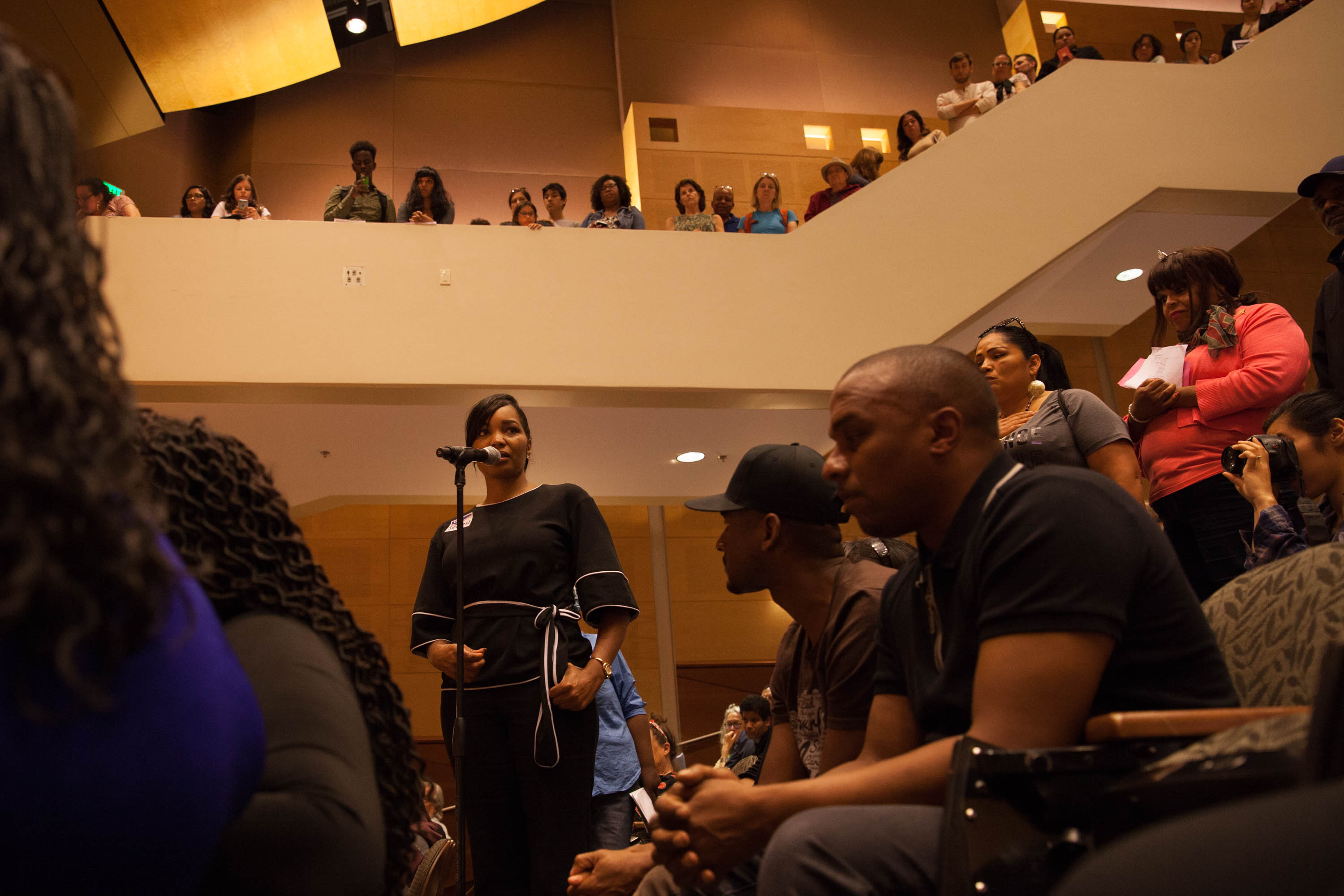 Sheley Secrest, a leader with the Seattle King County NAACP, addresses the Seattle City Council at Kane Hall on June 27, 2017 about the shooting death of Charleena Lyles. (Matt M. McKnight/Crosscut)

One by one, for more than two hours on Tuesday evening, Seattle residents spoke about the injustices that African Americans and people of color have had to endure. Hundreds gathered at the University of Washington at a town hall called in the wake of the fatal police shooting of Charleena Lyles, a 30-year-old mother of four. Many of the public’s criticisms were aimed at the nine members of the Seattle City Council.

"As a black woman in King County, my life is worth less because of what happened to Charleena," said 58-year-old resident Rose Jackie Floyd.

The town hall was organized by Councilmember Lorena González, chair of the Council’s Safe Communities Committee. Members of the Community Police Commission and Solid Ground, the nonprofit that provided housing for Lyles, were also there.

Black women were given the first opportunity to speak throughout the forum, which was moderated by Michele Storms of the ACLU of Washington. Before the town hall got underway, however, Lyles’ family members addressed the public.

“I’m so hurt inside,” said Charles Lyles, Charleena’s father, who sat in a wheelchair. “She died on Father’s Day. That’s the worst part. Every Father’s Day, I’m going to think about this.”

"My daughter loved life. There’s no way she would've wanted the cops to come in and kill her, especially in front of her kids," Lyles said.

Charles Lyles Sr., Charleena’s grandfather, also spoke. He noted that many of his family members had worked as police officers but said they — unlike those who had shot his granddaughter — had been properly trained.

Well-known members of the community stepped up to the microphone inside the UW's Kane Hall, so did others who may have previously been unknown to some in the room.

“I don’t know where the mayor is, you’d think he would be here,” said mayoral candidate Nikkita Oliver, referring to Mayor Ed Murray.

“We are burying our children,” said Sheley Secrest of the Seattle King County NAACP who is running for City Council. Secrest noted she was attending the town hall not as a political candidate, but as a black woman. “We cry because this is impacting our community, and we are depending on a system that has failed us too often.”

Jennifer Cobb, leader of an advocacy group known as And Justice for All, said, “There’s no excuse for what’s going on around this nation.”

“This has got to be the straw that broke the camel’s back,” Cobb said. “We need to shame America.”

“She was a mother first. She loved her children,” said downstairs neighbor Lhorna Murray. Murray called for police officers to stop dehumanizing and criminalizing those who are poor and struggling.

Various members of the public repeatedly called out Police Chief Kathleen O’Toole and others of the Seattle Police Department for not attending the town hall. They also highlighted what they see as law enforcement's systemic failures.

“Why do we give these people guns and lethal weapons if they don’t know how to use them correctly?” asked Fahima Muhamed, a student at Nathan Hale High School. “We think Seattle is so liberal...But everywhere is the same. Black people are still being targeted.”

Others chastised the police department for failing to take de-escalation seriously. They pointed out, for example, that Lyles had been shot within seconds of first allegedly threatening Officers Jason Anderson and Officer Steven McNew with a knife.

According to local reform advocate Andre Taylor, some members of the Lyles family objected to the meeting and refused to attend because police did not plan to go.

“The family of Charleena Lyles and the public demands a real public hearing, not window dressing,” Taylor wrote in a Facebook post. “We asked specifically for a meeting space where the police chief and her officers would address questions...It is not unreasonable to request the opportunity to talk to the police and chief in a public forum. So, we will not support this event because it's not about Charleena and the other families of police violence.” Taylor’s brother was shot and killed by police last year.

In an email to Councilmember Kshama Sawant and others, the police chief explained that she had opted not to attend the forum because "facts matter and prejudgment of this incident by any of us would be completely irresponsible."

"I have promised her family and their pastor that we will continue to be open, transparent, and available. As we are barely over a week into an investigation that typically takes upwards of 90 days, I see absolutely no benefit to airing those private, difficult, and heartfelt conversations in a public, or worse, political forum. To be clear, I and my team are always available to participate in honest, constructive dialogue," she continued.

Throughout the wide-ranging discussion, some cried, others shouted and one even sang her grievances. All, however, gave black women a standing ovation when one member of the public asked that they be recognized. On three separate occasions, city councilmembers were accused of paying more attention to their phones than to the public.

Ever since Lyles called police for help for what she believed was a burglary, Lyles' family has questioned why police didn't use non-deadly force like a Taser. In transcripts of interviews conducted during an internal department investigation, Officer Anderson said he received training to carry a Taser but was not carrying the stun gun at the time of the shooting. According to Seattle police policy, all officers trained to carry Tasers are required to carry it on every shift.

At the end of the forum, each councilmember was given two minutes to speak. Sawant reminded everyone that she has called for an independent investigation.

The forum began with an invocation by the Rev. Kelle Brown of Plymouth United Church of Christ.

To applause, she said: “The definition of insanity is doing the same thing over and over again and expecting different results.”