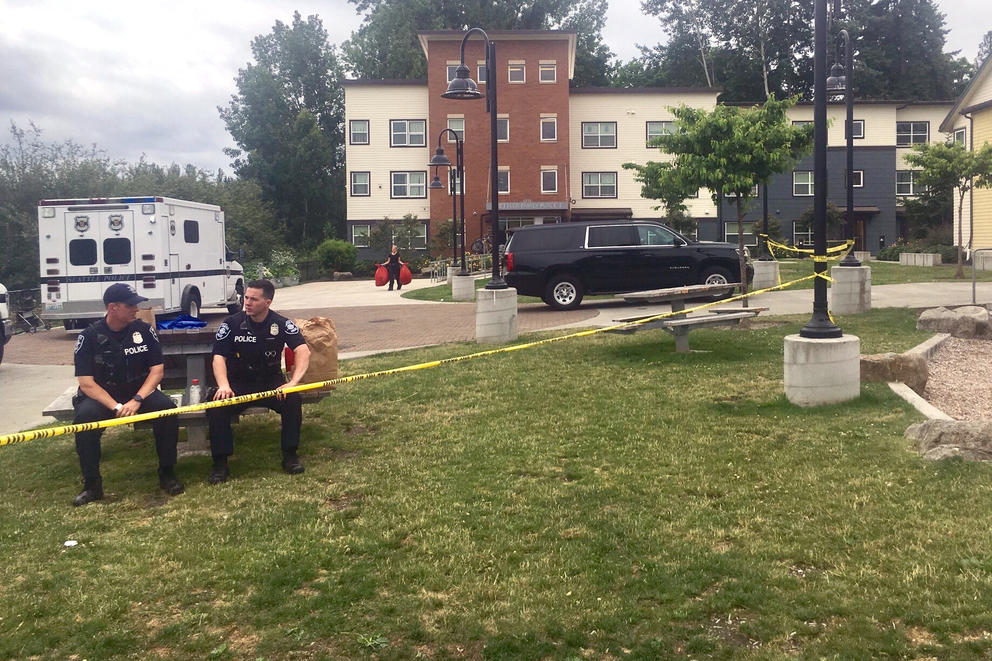 As word spread of Charleena Lyles’ death Sunday, family and friends immediately began to question why, even if she had pulled a knife, officers needed to use their guns. “Why couldn’t they have Tased her?” asked Lyles’ sister Monika Williams.

For years, the Seattle Police Department had been skewered for its excessive use of force, including fatal shootings. It came to a head in 2010, when Officer Ian Birk shot John T. Williams, a Native American wood carver, in the back. Williams was carrying a knife, which he used for his craft. His death prompted a federal investigation into the SPD.

In recent months, the department has received steady praise by an outside observer for taking a more measured approach to its use of force.

Last April, a report noted that the department was using force less often, turning instead to de-escalation and crisis intervention techniques. Departments across the country sent representatives to learn about SPD's new and more progressive training techniques. The positive report, it seemed, was more affirmation.

And on Monday, just hours after Seattle police released audio of its fatal shooting death of Lyles, the department received a positive evaluation by the same outside observer for its progress on stops and searches.

But for Lyles’ family and friends, for her apartment complex neighbors and even her nonprofit landlord, all that matters now is that Lyles, a 30-year-old African-American mother who called the police for help and was reportedly pregnant, is dead.

"Police are supposed to be here to protect you. Instead, they come to kill you," neighbor Ana Garcia, 40, said in Spanish. A five-year resident of Brettler Family Place and a mother of five children, Garcia was sleeping when the shooting happened.

Resident Kendra Young, 33, said she used to give police the benefit of the doubt. But not anymore. "Today it was her, but tomorrow it could be me," Young said. "It is about race. It is about white officers feeling like they have the right to kill black people."

The two officers who shot Lyles are white.

Christina Dames, 44, described how her daughter spotted a SWAT team when she looked out the window on Sunday morning. "I feel like their approach to it that morning was really overzealous," Dames said.

Two Seattle police officers arrived at Lyles' Sand Point apartment on Sunday morning after she reported a burglary, apparently of an Xbox. In audio released by the police department, officers can be heard discussing Lyles' mental health issues before entering her apartment building. When they first meet her, the interaction is calm. But in seconds, the situation turns for the worse and you can hear a string of gunfire. A department press release said the officers shot Lyles after she confronted them with a knife. She died at the scene.

Late Monday, the department released footage from a security camera in the building's hallway. In it, the two officers can be seen entering the apartment and then some commotion, but the video does little to fill out the series of events.

Between 2014 to 2016, the use of force by the Seattle Police Department dropped by 11 percent – a decline of 135 incidents. Proportionally, lower level uses of force were used more often – from 78 percent to 81 percent.

But the numbers showed a race disproportionality: 33 percent of force cases were toward African Americans, even though 8 percent of Seattle is black.

Still, measured against a federal judge’s yardstick, the drop in force seemed to offer proof that the department was on its way to fulfilling its obligations under a 2012 agreement with the U.S. Department of Justice.

According to a report issued as part of the federally-mandated reforms, when Seattle police used force at all it was considered within the department’s guidelines and appropriate 99 percent of the time.

The assessment pointed to "the significance and importance of this finding." The report from the federal monitor overseeing the reforms added, “It represents a singular and foundational milestone on SPD’s road to full and effective compliance — and represents Seattle crystallizing into a model of policing for the 21st century.”

But Lyles’ shooting death, says former Seattle Police Chief turned police reform advocate Norm Stamper, is an example of a critical disconnect: It doesn’t matter if use of force is within policy if people don’t agree with the policy in the first place.

In his experience, officers have been trained to treat any confrontation with a deadly weapon equally, regardless of the person on the other end, he told Crosscut on Monday. “That’s a real problem for me. That’s a real problem for the field of policing because we know that there are many situations where judgment, discretion, evasive action can result in preservation instead of taking of human life.”

Even in the more progressive corners of policing, training dictates officers draw their handguns whenever confronted with a deadly weapon. That includes knives.

“We have to go one step higher,” Deputy Joe Winters, a crisis intervention trainer at the Washington State police academy, told Crosscut in 2015. “If the perpetrator has a stick, we use a taser; if [he or she] has a knife, we use a gun.”

In a 2015 mock scenario for new recruits at the academy, attended by Crosscut, a man had a knife and was potentially suicidal. The officers were encouraged to speak softly, to calm him down, which they did.

But they were also instructed to draw their firearm; when one recruit was slow to do so, he was scolded.

The academy, led by former King County Sheriff Sue Rahr, has earned a reputation in recent years as innovative in how it trains officers, teaching them to be “guardians” and not “warriors.” It has added crisis intervention and de-escalation training.

Yet even at Rahr’s academy, officers are taught to always maintain the upper hand.

“Proportionality is intuitive,” Seattle University Professor of Criminal Justice Mathew Hickman told Crosscut in 2015. “It makes sense that the public should think force should be matching. But it’s also natural that to gain control of the scene, [police officers] should have to use a superior level of force.”

“It’s complicated," said Stamper, who oversaw the Seattle Police Department from 1994 to 2000. "I don’t think anyone would say that these are easy situations. But they can be made much more successful if we, in fact, look at policies and procedures and training and the individual actions of officers and critique them and ask what were the alternatives?”

In the wake of Lyles’ death, some have drawn a connection to a scenario involving a knife-wielding man last March. Police shut down several city blocks, calming the man over several hours. The situation ended peacefully between officers and the man, who was African American. Why, many have wondered, couldn’t Lyles have received the same treatment?

Seattle Police Chief Kathleen O’Toole declined to speak to the specifics of the Lyles case, but said, generally, “It’s a very different situation when you’ve got time and distance.” When it comes down to a “split-second decision,” officers don’t always have the ability to de-escalate, she said. The officers had both undergone Crisis Intervention Training, she said.

Others, like Lyles' sister Williams, have wondered why officers didn't use a Taser. The Chief confirmed that the officers were not carrying Tasers; officers in SPD may choose either Tasers, batons or pepper spray as their non-lethal weapon of choice. She did not say which of these the officers carried. Both officers have been placed on paid administrative leave.

In the coming days, the police will make more pictures and evidence public, according to O'Toole, including any footage captured on security cameras inside the hallway. O’Toole said she has not seen that footage.

The department’s Force Investigation Team will decide within the next few months whether the officers followed department policy. While O’Toole would not speculate on the results of that investigation, she said she was “devastated” by the whole incident. “This is just a horrible tragedy for everybody, particularly for her family.”

Correction, 12:20 PM, Tuesday, June 20: An earlier version of this article stated the knife-wielding man in an incident last March was white. That is incorrect. He was, in fact, African American. Crosscut regrets the error.