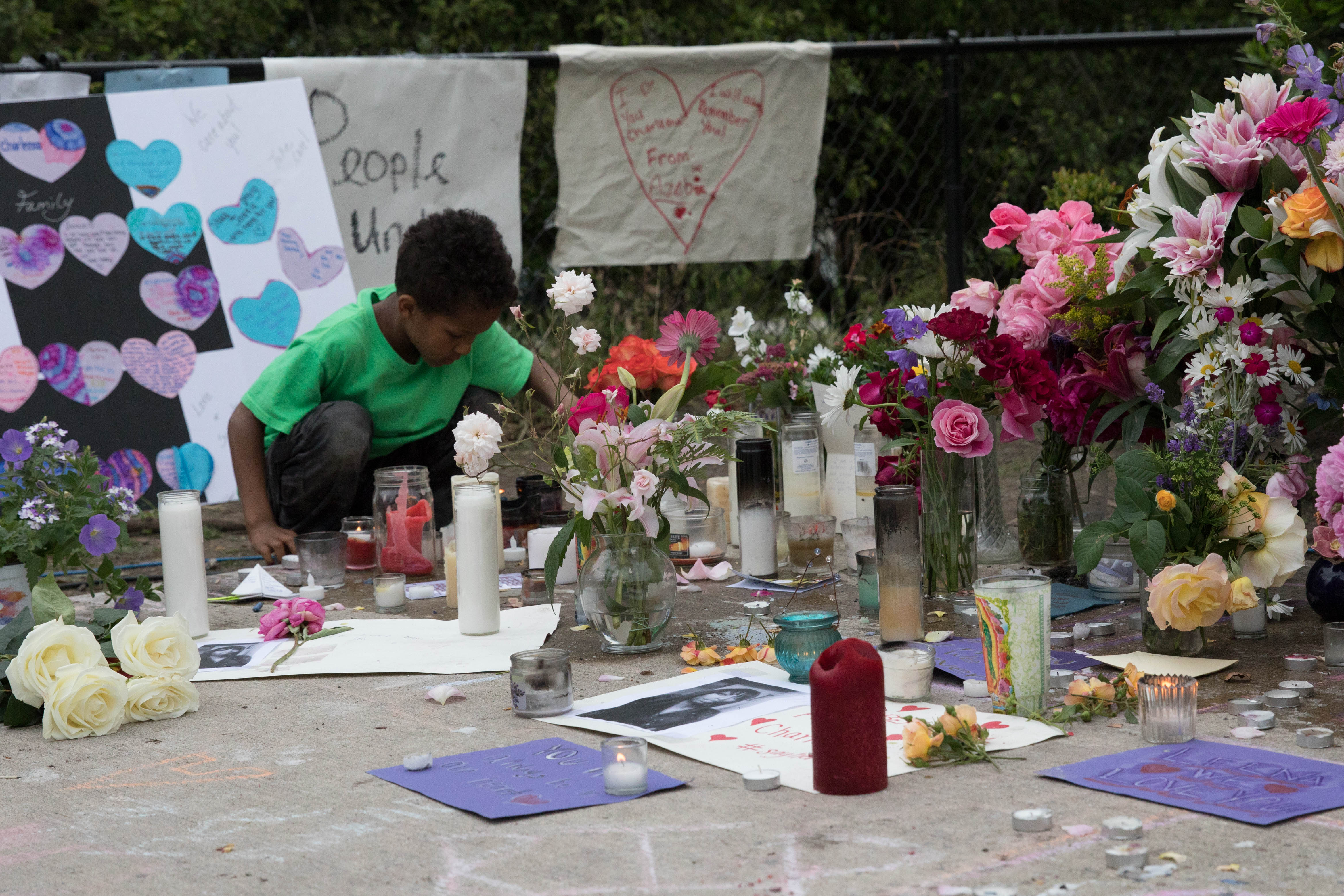 A boy is seen amid Charleena Lyles memorial at Brettler Family Place in Seattle's Magnuson Park on Tuesday evening, just days after she was killed by Seattle Police Department officers after she had called them to report a robbery.

Days after the fatal police shooting of Charleena Lyles, the city continues to process its grief and outrage. A meeting in a downtown skyscraper is anything but unremarkable as a police official breaks down in emotion. A community vigil at Magnuson Park morphs into a miles-long march to the Montlake Bridge.

At a meeting Wednesday morning, the Community Police Commission set aside its usual discussion of police reform to listen to people of color who were invited to talk.

“It’s nice to be a person,” said Brianna Thomas, one of the people who took up the commission's request for thoughts about the police in the wake of Sunday's shooting of Lyles, 30, in an apartment where three of her children were present.

Thomas, a legislative aide to Seattle Councilmember Lorena González and not a regular member of the commission, sat at a table of mostly African American men and women who were all invited to join the commission in the wake of Lyles' death. Community members and advocacy workers, like Tara Moss of Real Change and others who asked that their names not be published, gathered in a Seattle Municipal Tower conference room, 16 floors up. And there were people who work with or for local government: Thomas; Ian Warner, legal counsel to Mayor Ed Murray; Ron Ward, a member of the team that monitors the Seattle Police Department’s reform progress under a federal consent decree; and Kevin Stuckey, president of the Seattle Police Officers Guild, the department’s rank-and-file union.

The conversation moved in outward circles. The African-American women were invited to speak first.

“This whole society is based on the idea that there is something fundamentally wrong with us,” said Rev. Harriett Walden, a CPC member and founder of Mothers for Police Accountability. “God was flawed when he created the negro. … Our best is not good enough. Our best is never good enough.”

“I have officer friends and I wouldn’t call the police for shit,” said Minty LongEarth, a commission member who moderated the discussion. She added, “I know people who won’t go near pit bulls. You can say most pit bulls are nice until one bites your face off. That’s how I feel about police officers right now.”

When there was silence among the women at the table, LongEarth asked if the women were willing to yield the floor to the African-American men in the room. They were. Warner, who is black, spoke of grappling this week with “the emotion knowing that there are three young black kids and that there’s a community up there dealing with that situation.” He said he would take some time alone this weekend. But for now, he has work to do.

Stuckey, an African-American man and leader of the activist-maligned union, said, “I don’t think we have time to really tell you what’s going on in my mind.”

Since Lyles' death, though, many police officials have privately said that this is the worst and saddest situation they can ever remember.

Stuckey, whose job is to advocate for police officers, choked up as he spoke, pausing to gather himself. “I’m not gonna suck up air in this room other than to say, 'I see you, I hear you.' … Every step of the way, I hear my community, I see my community.”

On the night before, armed with flowers and heavy with heartache, hundreds of Lyles family supporters gathered in front of her Magnuson Park apartment to express outrage over police brutality.

“You guys are making the children fearful of their protectors,” said Monika Williams, Lyles’ sister, referring to police, as the crowd interspersedly chanted, “Say her name.”

City Councilwoman Kshama Sawant accused the city of criminalizing black, brown and poor people and called for a full investigation. Just as in last year's fatal police shooting of African-American Che Taylor, Sawant demanded that a hearing be held in which the public is given the opportunity to question officials, including Police Chief Kathleen O'Toole. City Councilwoman Lisa Herbold confirmed she and Sawant are in the very early stages of planning such a meeting. As a first step, they have reached out to the Community Police Commission. Sawant also said that Seattle is in need of an elected civilian review board with real power over the police, such as the ability to subpoena officers and decide on policies and procedures.

As the rain began to fall and the sun began to set Tuesday, the crowd filed out of the complex to set out on a three-mile, peaceful march to Husky Stadium. They waved signs with images of Lyles and Black Lives Matter slogans.

Some supporters stayed behind to light candles at the makeshift memorial established for Lyles in front of her apartment building. Residents of the low-income housing project shared food as children played in a small playground. One supporter worked on a painting of Lyles and her family. Another proudly displayed the white sweatshirt she had made for the occasion: On the front of the hooded garment, bold black letters spelled "Charleena Lyles."

Williams lingered by her sister's memorial. She sometimes broke down crying. In other moments, she cooed at one of Lyles' young daughters, a baby with Down syndrome.