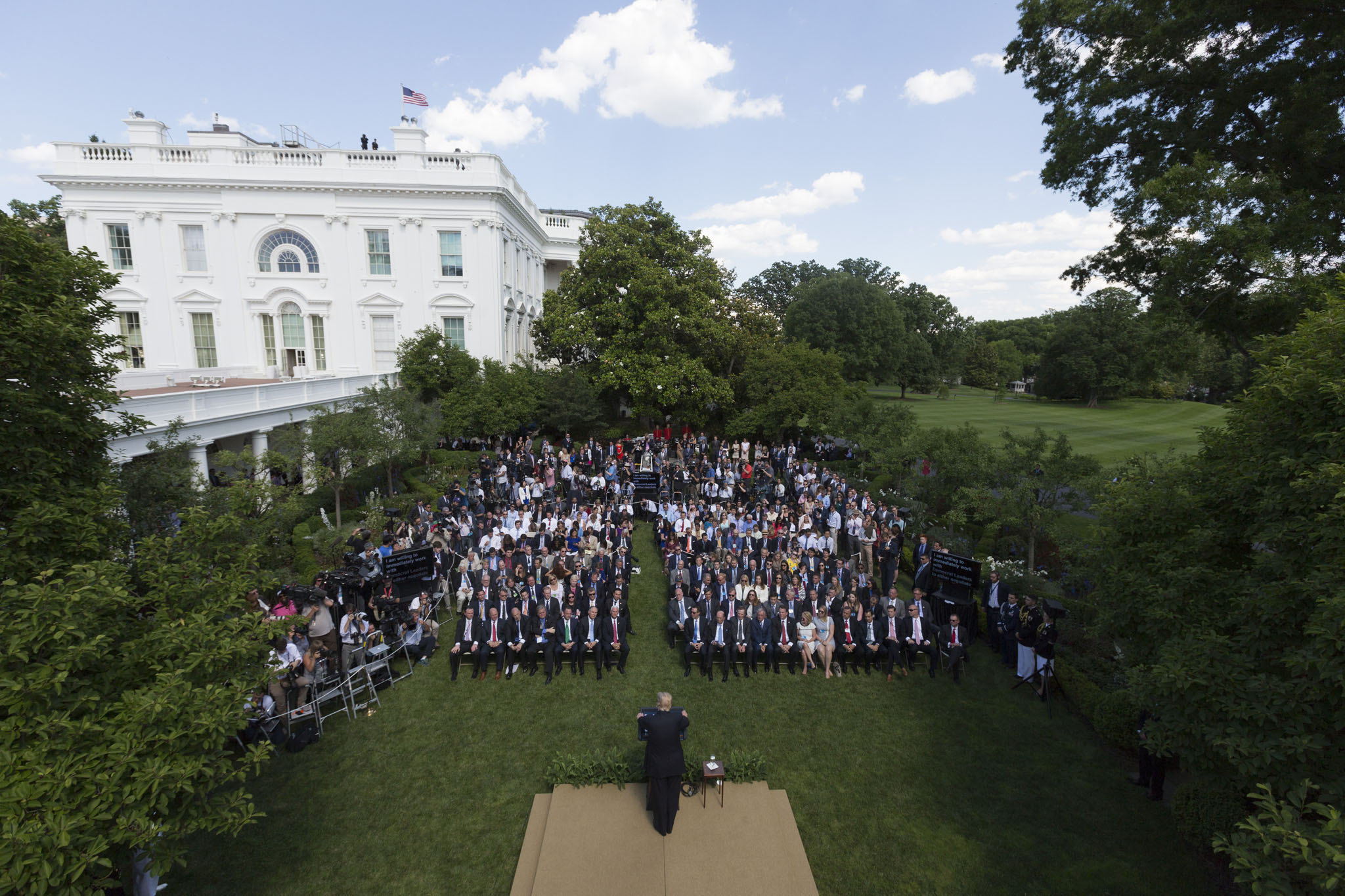 President Donald Trump talks about the Paris climate agreement in the Rose Garden of the White House.

There’s no climate salvation coming from the moderate wings of the White House. The Trump administration has made clear it will bulldoze international consensus and neither mandate nor encourage climate action nationally.

For a city like Seattle and a state like Washington, Donald Trump’s decision to leave the Paris Agreement is a test. We can lay down our swords in the fight against global warming. Or we can start pursuing the kind of action that matches our rhetoric.

Trump’s move on climate echoes the U.S. failure to ratify the Kyoto Protocol at the turn of the millennium. Seattle responded then, when the mayor at the time, Greg Nickels, catalyzed the assembly of a coalition of mayors interested in upholding the agreement’s goals.

Washington Gov. Jay Inslee, now finding himself in a similar position to Nickels after the Kyoto failure, announced on Thursday the formation of the United States Climate Alliance, a new coalition that will “convene U.S. states committed to upholding the Paris Climate Agreement and taking aggressive action on climate change.”

Inslee will serve as a co-chair of the new Climate Alliance, where he’ll be joined by New York Gov. Andrew Cuomo and California Gov. Jerry Brown. By Saturday, the governors of Oregon, Hawaii and four New England states had also announced they would join the coalition. Alongside the new coalition, some 180 mayors have already vowed to cut their carbon emissions in order to uphold the Paris Agreement’s goal of limiting global warming to a maximum of two degrees Celsius. And 30 mayors, three governors, more than 80 university presidents and more than 100 businesses, according to the New York Times, are negotiating with the United Nations to file an alternative climate pledge on behalf of the United States.

The rumbling afoot suggests a groundswell of subnational climate action. But there’s reason to be wary here. Coalitions are political currency, and #theresistance is trendy. What shape the new climate policy wave will take remains unclear.

In his statement on the Climate Alliance, Inslee argued that the U.S. exit from the Paris Agreement "leaves the full responsibility of climate action on states and cities throughout our nation.” That idea is an affirmation of something Inslee and mayors ought to have internalized before Trump’s decision. Broadly understood, cities account for something on the order of 70 percent of global carbon emissions. The acceptance of responsibility should also have been there before this.

Nevertheless, here we are. Washington, California and New York — the three founding members of the new Climate Alliance — account for 20 percent of the people in the country, 20 percent of its GDP, and 10 percent of its emissions. These are big economies, and when they act on climate, it matters.

What does acting on climate really look like? It looks like cities refusing to finance fossil-fuel infrastructure and instead investing in energy efficiency and housing near public transit (or in public transit in the first place). It looks like states choosing to align themselves with the goals of the Clean Power Plan (a cornerstone of the U.S. climate pledge to the United Nations) regardless of whether the Clean Power Plan remains the law of the land. It looks like states elevating their roles — and perhaps those of their cities, counties and even businesses — on the international stage. (Gov. Jerry Brown is in China right now affirming California’s commitment to climate action.) States and cities don’t need federal support or mandates to do these things. They need the political will to do so.

This political will demands ambition and hard work. Even in Seattle, where carbon emissions from the city’s core sources — road transportation, building energy and waste — declined 6 percent between 2008 and 2014 (while population grew by 13 percent), the city isn’t on track to meet its pledge of a 58-percent reduction by 2030 and carbon neutrality by 2050. With respect to the state as a whole, Washington’s emissions increased in 2013 compared to 1990 levels. Some blame a conservative state legislature’s stymieing of progressive climate policy. Others point to green infighting in these types of policies’ formulation. One thing that’s clear: Climate policy by executive fiat won’t fly.

But one of the great things about federalism is that it prepares us for moments like these. States rights, right? If carbon trading makes sense for a given state, great. If fuel efficiency standards or renewable energy standards are more politically viable outside D.C., fantastic. Seattle Councilmember Mike O’Brien said Thursday that he and the mayor’s office would look for stronger fuel standards. In addition to the work already being done on electric vehicles and expanding public transit, O’Brien said they would look for ways to “dial-up” fuel mileage standards in city limits. Seattle’s authority in this realm is limited and largely dependent on federal guidelines, but O’Brien suggested the city could perhaps add more incentives for drivers to use cleaner cars. Asked if the city could levy fees against polluting vehicles, O’Brien said they could look into it.

It’s a fit-for-purpose approach. Tax credits, too, will necessarily take different forms in different states and cities, and in fact it’s vital they do. When a city experiments with something new, states can crane their necks, observe the results, and adopt solutions at scale. That’s how it’s supposed to work.

But most importantly, states and cities can choose to go beyond Paris. O’Brien and Mayor Ed Murray’s forthcoming resolution is expected to affirm Seattle’s commitment to meeting the Paris goals. But many climate advocates, like those at 350.org, always saw the agreement as inadequate. The pledges on the books were never going to limit global warming to two degrees. Maybe now’s the perfect time for more radical options to shine.

No one ever said radically transforming the energy sector would be easy. And now, a heavier burden will be placed on the shoulders of state legislatures and private companies interested in spurring climate action. This burden doesn’t imply an impossible task, but it implies one that’s difficult. Luckily, contrary to Trumpian logic, the energy markets are on their side.

By all means, we should despair at the loss of diplomatic capital the United States just willingly tossed into the coal boiler; despair at the bare and wild moral failure of a country that gleefully steals from future generations and frames international disaster aid as wealth redistribution; despair — and remain shocked — at the breathless ignorance to science, history and statesmanship that infect the logic behind leaving this agreement; and despair that this logic has wormed its way to the inner halls of the world’s most powerful military-industrial apparatus.

But we shouldn’t despair for climate action — not yet, anyway. We’ll always have the cities.