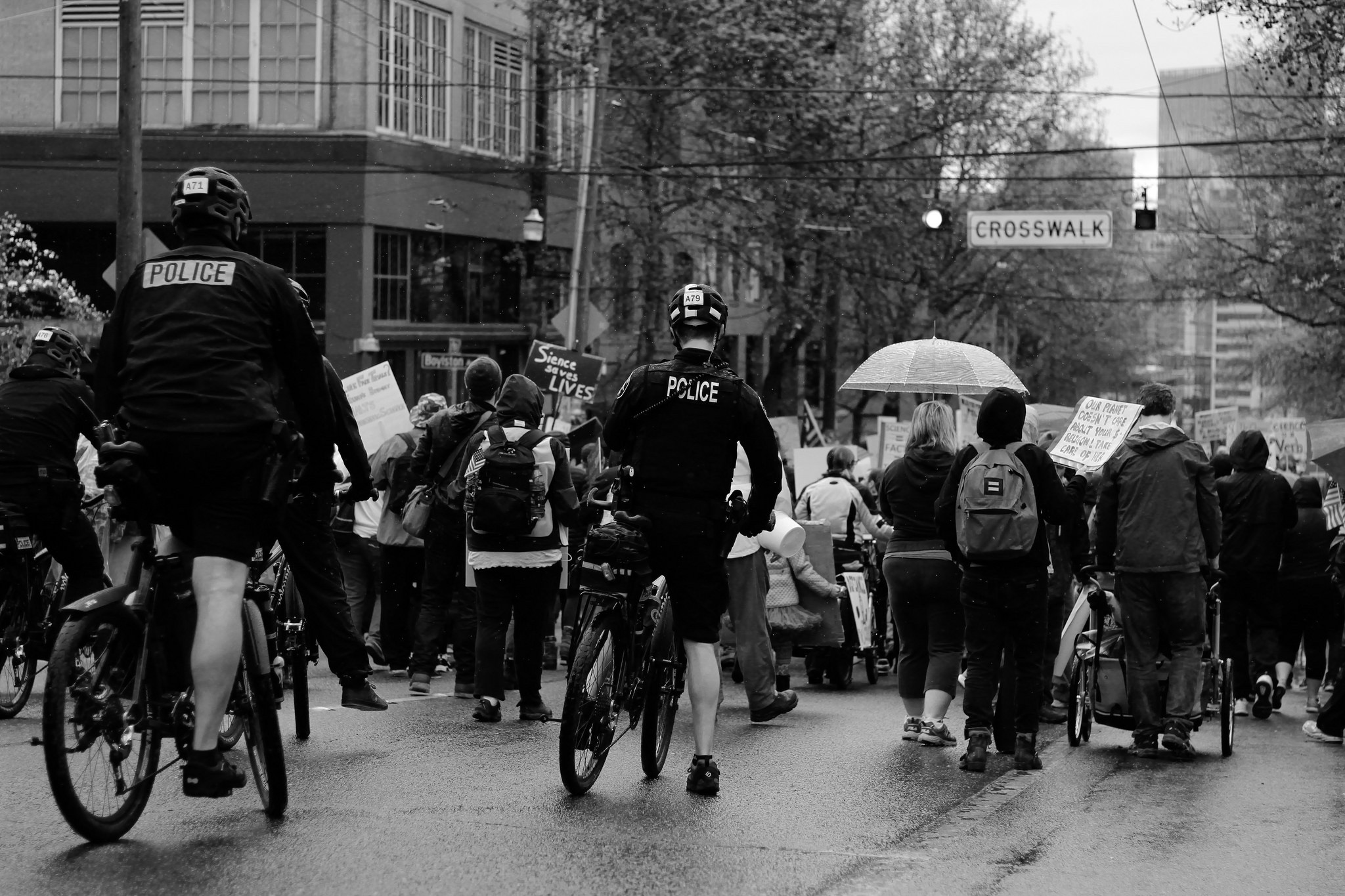 Seattle police accompany protesters at a demonstration earlier this year.

Update, 11:30 a.m., June 21: In a statement Wednesday morning, the Jewish Federation of Greater Seattle said that, in light of the shooting death of Charleena Lyles, it will not present the award on Thursday. The organization's full statement is at the bottom of the story.

On Thursday, four days after Seattle police shot and killed Charleena Lyles — a 30-year-old, African-American mother of four who was reportedly pregnant with a fifth child — the Seattle Police Department and Chief Kathleen O’Toole are scheduled to receive the Tikkun Olam Award for Public Service from the Jewish Federation of Greater Seattle.

"When we saw it was the Seattle Police Department, we thought it really doesn’t seem appropriate,” Rosenblum said.

An online petition calling on The Jewish Federation to rescind its award, which was posted on Monday, had gathered more than 300 signatures shortly after noon on Tuesday.

“In the wake of Sunday’s police killing of Charleena Lyles, an African-American mother who called the police for assistance and ended up dead, the idea of the Jewish Federation carrying through this award is especially appalling,” reads the petition. “The argument that the Police Department may work with the Jewish community effectively on other matters is, at this point, completely overshadowed by the police killing in our community of yet another Black person.”

The award ceremony is set for Thursday evening on the University of Washington campus and will be met with protests from members of the progressive Jewish and broader activist communities.

A representative of the Federation, Max Patashnik, said no statement was available but one might be later today.

The Federation is an advocacy organization for the broader Jewish community in the Puget Sound region. It does outreach, invests in smaller organizations, lobbies in Olympia and publishes the Jewish in Seattle magazine.

Within Seattle and the Puget Sound region, there are a large number of smaller Jewish organizations, like Rosenblum’s Kadima. But the Jewish Federation is the umbrella organization. Rosenblum said he and his group often work with the Federation, but it is “not really representative of the grassroots community.”

Tikkun olam literally translates from Hebrew as “repairer of the world.” It is a term, according to Rosenblum, that denotes social activism, civil rights and aiding those who are less fortunate.

Gabriella Sanchez-Stern, 28, a graduate student in education at the University of Washington, said she was taught while growing up that when the world was created, it was perfect. But time has broken it and it’s the Jewish community’s duty to piece it back together. And not just for other Jews, but for everyone. That, she says, is tikkun olam.

To her, as a Jewish person of color (her dad is a Mexican immigrant), law enforcement does not represent that goal of repairing the world. “Especially considering the events of the weekend it really hit home for me,” she said. “It really feels like a slap in the face. I’m a Jewish person of color. The [law enforcement] institution does not protect my family or community and it doesn’t represent safety for me.”

The Seattle Police Department has been obligated to overhaul its practices since settling a lawsuit with the Department of Justice in 2012. It has not yet met those obligations, but it has been held up across the country as an example of what federal intervention can accomplish. The department routinely hosts representatives from other departments looking to learn more about de-escalation and crisis intervention trainings. Police Chief Kathleen O’Toole sat in First Lady Michelle Obama’s box during President Obama’s final State of the Union.

When the Seattle City Council recently passed a suite of accountability reforms, officials celebrated the new law as a rebuke to Attorney General Jeff Sessions’ distaste for federally-mandated reform.

But the shooting deaths of Lyles and Che Taylor, a 46-year-old African-American man killed last year, have left community members mistrustful about how the police regards and treats people of color.  “In a city where the police department is under federal supervision and judicial oversight, you think someone might pause when they came up with the idea of honoring the police department,” Rosenblum said.

Rosenblum said there are other worthy groups to honor in Seattle, such as Black Lives Matter or the labor movement advocating for the $15 minimum wage.

"There’s no shortage of people and organizations that would be worthy recipients," Rosenblum pointed out. "Even so, we’re not arguing we had better choices. We’re saying this choice you made, in the context of what’s happened to our city in the last 36 hours, is shameful."

Here is the statement from the Jewish Federation:

The Seattle Jewish community and the Jewish Federation of Greater Seattle are committed to an American society based on equal opportunity and justice for all. We share deep concern about the disproportionate use of police force directed at African-Americans in our country, and we believe that substantial steps are required to address this important gap in racial justice.

The recent death of Charleena Lyles, a young mother of four, saddens us greatly. Our thoughts and prayers go out to her family and all who knew and loved her. As the circumstances of her death are investigated, it is important that the tragic end to Ms. Lyles’ life spurs additional action by the police and other segments of our society aimed at closing gaps and preventing further tragedies.

In May, the Jewish Federation of Greater Seattle selected Chief Kathleen O’Toole and the Seattle Police Department (SPD) for an award to be presented this Thursday, June 22,  for taking on the challenges of improving the community. We made this choice for two main reasons:

1) Chief O’Toole’s and the SPD’s commitment to ensuring officers understand what it means to administer authority ethically. The SPD has committed to mandatory training for every officer through “Law Enforcement and Society: Lessons of the Holocaust”.* This training encourages officers to examine their relationship with the public and to see themselves as defenders of the Constitution, especially against the breakdown of democracy, and as guardians against mass crimes against humanity, by respecting and attending to the humanity of each person they encounter.

2) The Seattle Police Department’s work with SAFE Washington to combat hate crimes and, through information sharing, skills training, and relationship-building with SAFE Washington, to improve its protection of the Jewish community. This assistance has been invaluable during the recent increase in anti-Semitism across the Puget Sound region.

We stand by our original reasons to bestow the award on Chief O’Toole and the SPD. We also believe, in light of recent events, it is not appropriate to present an award at this time. We and Chief O’Toole concurred that this was the best decision. With so many unanswered questions regarding the circumstances of Ms. Lyles’ death, we all believe it is not respectful to the Black community, to Jews of color, nor to all those committed to racial justice to go forward with the award right now. For these reasons, the Federation will not be presenting the award at Thursday’s Jewish Federation annual meeting.

Communities of faith, charitable and educational institutions, elected officials, law enforcement, community leaders–we all have unfinished work to do in strengthening our society’s protection for the most vulnerable and repairing the world. May Ms. Lyles’ memory be a blessing to all who knew her and inspire our shared commitment to work for racial equity, comprehensive mental healthcare, and justice for all.

*A partnership of the Pacific Northwest Anti-Defamation League, the United States Holocaust Memorial Museum, the Holocaust Center for Humanity, and the Seattle Police Department.