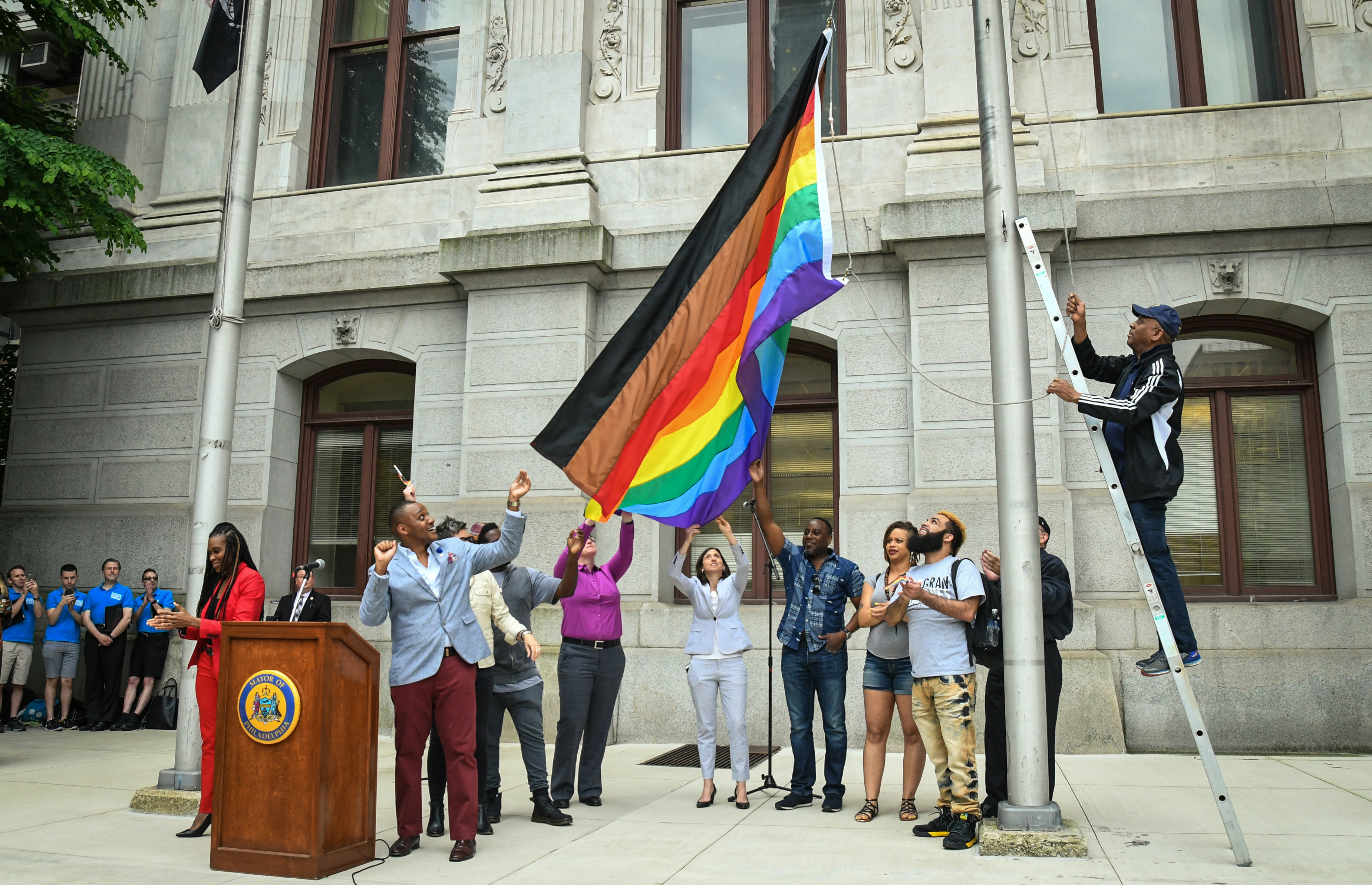 A new and more inclusive Pride flag is raised at Philadelphia City Hall on June 8 during a Pride month kick-off event including city officials.

Earlier this month, the city of Philadelphia unveiled an updated Pride flag for this year’s celebration. In addition to the usual six colors, this one had two new stripes across the top: one black, one brown.

The gesture was meant to acknowledge people of color in the LGBT community in Philly after several racist incidents in the city’s gay district. Last year, a video was posted online showing the owner of a bar in Philly’s Gayborhood using racist slurs, and there have been so many complaints of discrimination that the city recently ordered the owners and staff of over a dozen gay bars and nonprofits to undergo anti-racism training.

The flag, the city hoped, would help make people of color feel more welcome in a community that historically hasn’t represented them. They called the project More Color, More Pride.

"In 1978, artist Gilbert Baker designed the original rainbow flag…” the organizers wrote. "So much has happened since then. A lot of good, but there's more we can do. ... To fuel this important conversation, we've expanded the colors of the flag to include black and brown. It may seem like a small step. But together we can make big strides toward a truly inclusive community."

They had high hopes for the campaign.

“This is going to take the nation by storm,” Amber Hikes, Philadelphia’s director of LGBT Affairs, told the Philadelphia Gay News. “I believe that very deeply. This is an opportunity for the community to come together and celebrate not just Pride but also the community members whose voices and experiences that so often get overlooked. To me, this is a chance to stop saying ‘We’re inclusive’ and to actually begin showing it.”

The flag did take the nation by storm, but not how Hikes likely imagined it. The response among many in the white LGBT community has been outrage, and the battle is playing out online.

“What the f--- is the point of having a flag dedicated to being proud of your sexuality if it's also about being proud to be black?” wrote one Facebook commenter.

“This is a rainbow, for god’s sakes, which transcends race segregation,” wrote another. “I don't think there are any purple, green, or blue people feeling more represented. Give it a rest.”

“Thanks to this, a division has already begun and an argument created over something that had nothing to do with skin colour,” wrote another. “It was about sexuality, love, peace and acceptance. If we're going to add skin colours, then while we're at it, I don't see my skin colour represented there at all.”

The fight has highlighted an ugly and frequently ignored truth about the queer community, says Madison Mooney, a queer black activist in Seattle who began organizing a meet-up for women of color after the police shooting of Charleena Lyles.  “I experience racism in this community daily,” Mooney says. “Gayness doesn’t absolve people from anti-blackness or racism. I think the common belief is that because a white person is gay they couldn’t possibly be racist, but the truth is that the LGBT community is notoriously racist. And it’s a huge issue.”

This is echoed by Ray Corona, a queer immigrant who has served on the City of Seattle’s LGBT Commission. Corona says queer people of color frequently encounter racism, and this is especially apparent on dating apps, where you often see racial preferences listed up front, like “no Asians” or “no blacks.” (The Guardian reported last year that “an astonishing 80% of black men, 79% of Asian men and 75% of South Asian men have experienced racism on the gay scene.”)

Corona says that face-to-face racism in Seattle is subtle but pervasive. “There’s a passive aggressiveness to the racism here,” he says. “You’ll hear people say things all the time like, ‘Oh, you’re cute for being black or being brown.’”

In addition to racism within the queer populace, Pride events around the country are frequently criticized for whitewashing. The first Pride in 1970 marked the one-year anniversary of The Stonewall riots, which were instigated by queer people of color. Today, however, that history is often erased, and many Pride organizations — and gay rights groups in general — are run exclusively by white people.

And that’s a problem, because “when leadership is homogenous, you start talking to an echo chamber and you end up making decisions that aren’t inclusive of the whole community,” says Monisha Harrell, Chair of Equal Rights Washington.

Harrell is a fan of the Philadelphia Pride flag, which, she points out, is just one among many Pride flags. “There is a Bisexual Pride flag and a Trans Pride flag and one for furries and bears,” she says. “What’s wrong with one that reflects unity?”

The first Seattle Pride took place over one week in June 1974. It included a memorial service commemorating the victims of an arson attack on a New Orleans gay bar the year before that had killed 32 people.

Seattle Pride was small in its early years, but today, it is one of the largest Pride celebrations in the country. Last year, an estimated 400,000 attended.

Like many cities in America, Seattle Pride has historically suffered from a lack of diversity among leadership. But in the past two years, the organization has made an effort to change that. Now, the board “is extremely diverse with regard to race, gender, sexual orientation, age, and disability,” says David Hale, vice president of the board. “We are quite proud.”

The theme of this year’s Pride is Indivisible and the organization has increasingly reached out to communities of color, Hale says. Much of this is due to Board President Kevin Tooney, himself a queer man of color whom Hale says has championed prioritizing people of color.

“We don’t see the Philly Pride flag as controversial,” Hale says. “The flag has changed many times for many reasons. It was changed when Harvey Milk was assassinated. Another stripe was removed just to make it symmetrical. Adding stripes to honor something that our community is really trying to grapple with is laudable. It’s starting conversations, which is what Pride exists to do.”

Seattle Pride will open that conversation further on Thursday, with Real Talk, a forum on race and inequality in the LGBTQ community at the Frye Art Museum.

“Our role in this conversation should be largely dictated by queer people of color,” Hale says. “I'm a white cisgender male in the queer community and for me, the most important thing is to shut up and listen.”