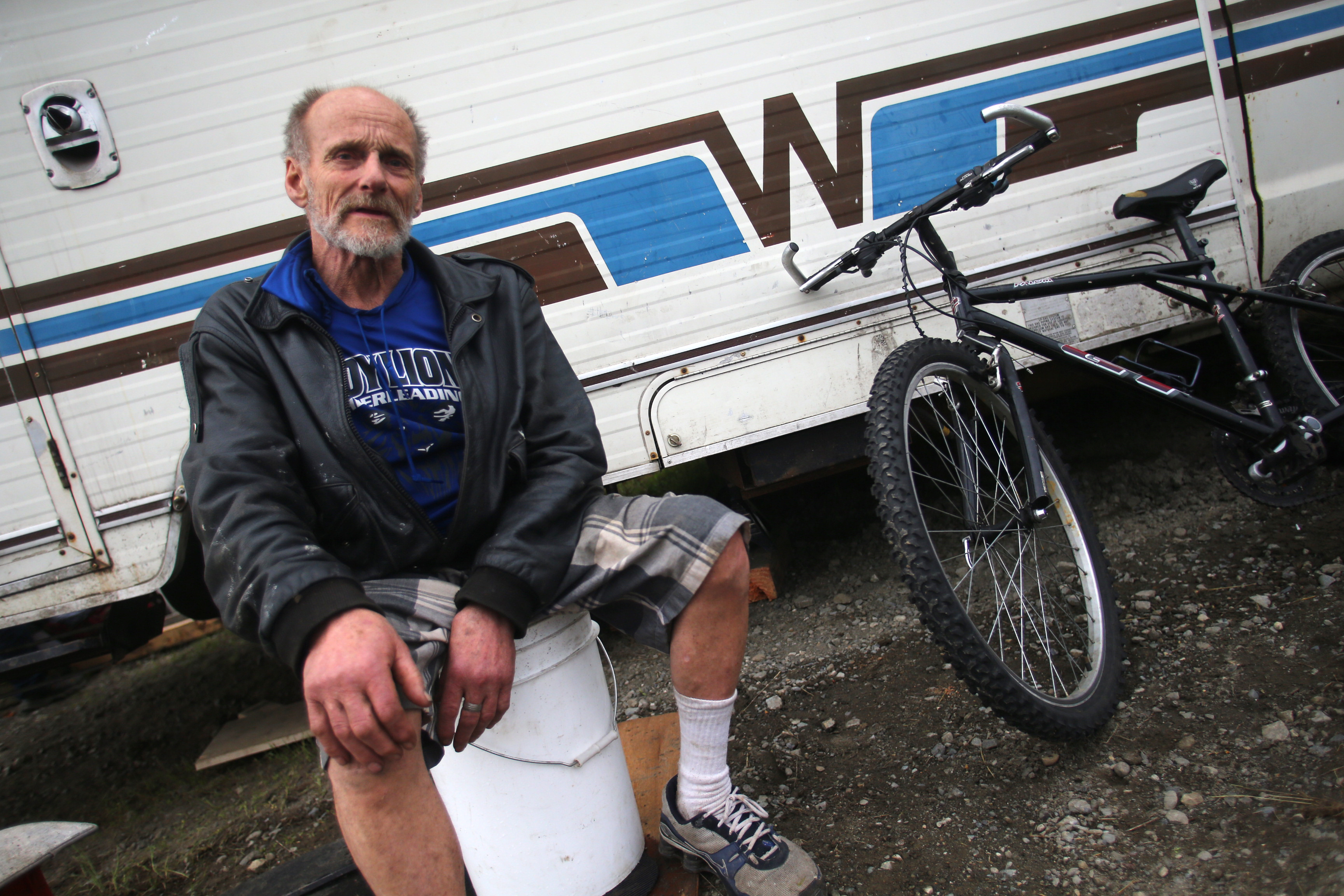 Mike Burns was one of some 30 people who was swept out of a homeless encampment in South Seattle on June 1, 2017. He lives out of his RV, which is too old to be accepted by area RV parks.

When Daniel Kisch fell on hard times and lost his “beautiful” home on Lake Washington in the early 2000s, he took what money he had and bought a 1981 Winnebago RV. It would be no replacement, but, he figured, at least he could live off his Supplemental Security Income in an RV park somewhere.

But it wasn’t so easy: RV parks restricted the age of the vehicles allowed in. Every park Kisch contacted prohibited vehicles more than 10 years old.  “I have money,” he explained in an interview last week, sitting outside his beige RV. “But nobody will let me park there.”

So, battling a kidney disease, Kisch joined the ranks of others who live in mobile homes in the only other spaces available to them and their vehicles: underneath highway ramps, in store parking lots or on vacant city and state property lots.

“So you end up parking on the street and nobody wants [these vehicles] on the street because you end up making a mess like that,” he said, pointing toward a neighbor’s sprawling pile of clothes and garbage.

Until last Thursday, Kisch was living out of his RV parked on state property on the edge of South Park, near the Duwamish River and the 1st Avenue bridge. There were some 30 people with their vehicles there on a lot that is largely dirt and, in some places, full of weeds.

Several people had arrived weeks earlier after being forced out from beneath the West Seattle bridge. They entered this space by cutting a lock, explained Julie Moore with the Department of Finance and Administrative Services. In other words, they trespassed onto a lot planned as storage space for I-5 construction equipment, Moore said.

Now authorities were ousting people and their vehicles. Kisch was upset; you could hear the frustation in his voice. But he wasn't upset with the city or state as much as he was with the person who reportedly told him this space was available for people like him: homeless.

By late morning last Thursday, Kisch was one of the last people still on the property. He had a flat tire and city officials and police were allowing him some leeway.  Kisch wasn’t sure where he would head next. He just knew it wouldn't be a trailer park even though he could pay.

Crosscut reached out to six Seattle-area trailer parks that rent space on a monthly basis. For an RV the size of Kisch's, it would cost him around $550 a month, which Kisch says he could cover with his SSI and what he's got squirreled away. Four of the parks noted having restrictions against older vehicles; the other two did not respond. Three parks in Everett — Lakeside RV Park, Maple Grove RV Resort and Harbour Pointe RV Park — said vehicles older than 10 years were prohibited. Blue Sky RV Park near North Bend said they'd only take a vehicle as old as 2000 if there were photographs showing it was not too rundown.

Kisch said he’d previously reached out to RV parks in Burien, Renton and Federal Way, all of which told him they would bar his Winnebago.

According to staff reached at the RV parks, the rationale for banning older vehicles is largely about aesthetics.

“It’s really the way he wants the park to look,” said an attendant at Blue Sky about the owner. “He doesn’t want RVs that are falling apart.”

At Lakeside, the owners worry that some RVs may break down on the property or that pipes might burst, an attendant explained. The owners also want things to look nice. “A lot of the RV parks have that same rule,” the attendant said.

"It's a shame," Kisch said. "It would be great to have a power hookup, sewer, water.”

Seattle maintains a “safe lot” for RVs in SODO, where people may park and live in their vehicles, but it lacks amenities. It has space for 20 vehicles. Officials tried briefly to open a lot with power and water in Ballard. But the costs ballooned to $35,000 a month for only 20 RVs, or $1,750 a vehicle. Speaking to the Seattle City Council in April, 2016, Scott Lindsay, advisor to Mayor Ed Murray, said, “The safe lot right now is costing an exorbitant amount of money that probably nobody here would feel comfortable continuing to invest on an ongoing basis.”

And so, the city shut that lot down.

The number of people living in cars and RVs is 2,314, according to the most recent King County count. Most of those people would not be able to afford space in a trailer park the way Kisch can. But some would. In fact, Mike Burns, another South Park resident who used to make a living installing floors, said he could pay for his 1980s motor home if he were allowed in a trailer park.

But there are waiting lists and Kisch and Burns will not be on them.