Is Sea-Tac too good for Ivar's now? 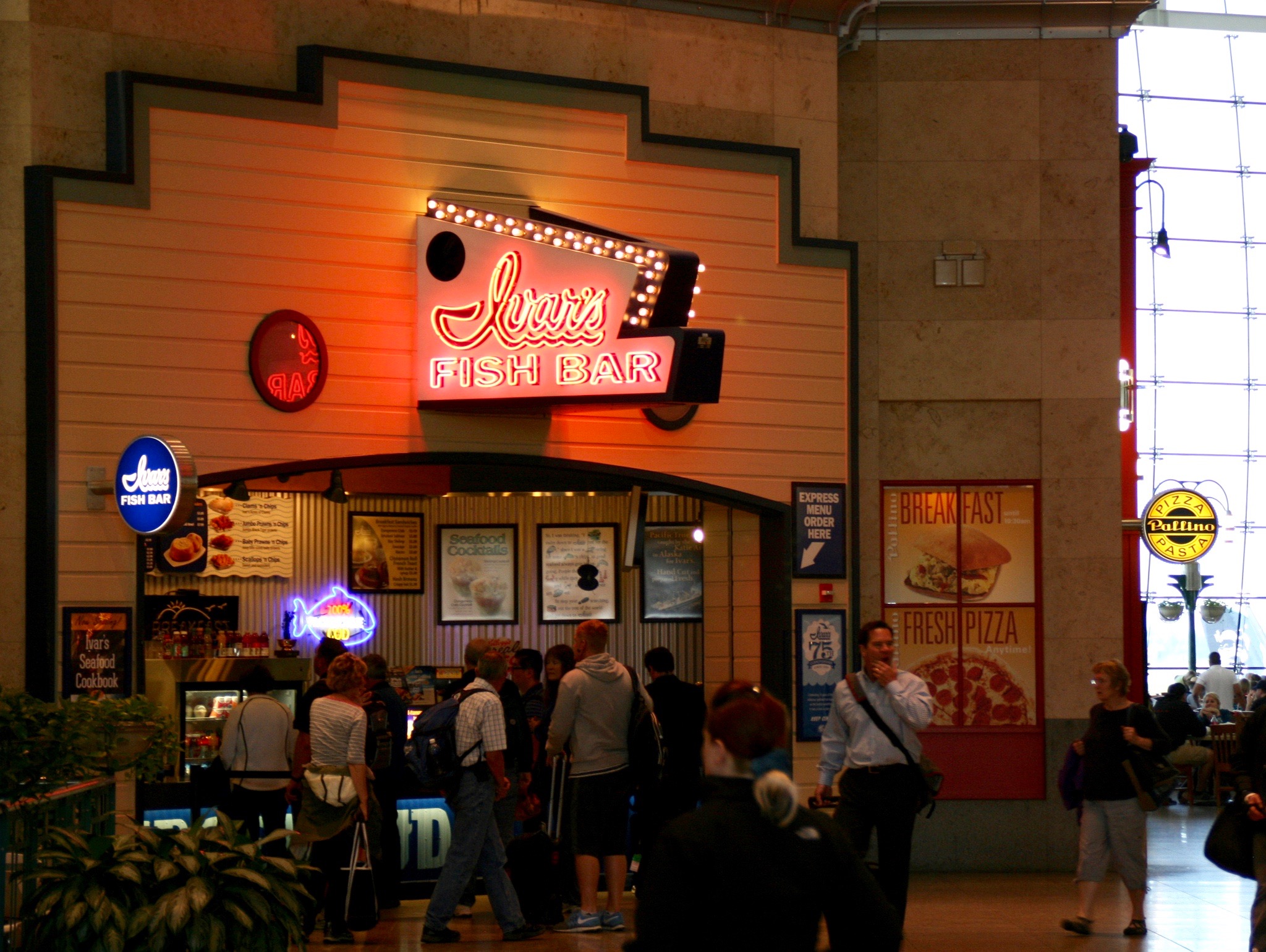 I admit it. I’m an Ivar’s fan. After all, they once named a cocktail after me.

But it goes deeper than that. Ivar’s is a well of Seattle culture. The place where kids get their first taste of raw oysters. The place where tourists are introduced to the fruits of the Salish Sea. The place that embodies a certain Seattle can-do culture, where a folk-singing beach bum entrepreneur created an iconic commercial institution.

In a city with few statues, we have one of Ivar Haglund, founder of the Ivar’s mini empire. In a city that demolishes its history, Ivar saved the Smith Tower. In a city that too often takes itself waaay too seriously, Ivar’s has always had a twinkle in its eye as it did when it pulled a hoax about having discovered old undersea billboards its founder supposedly aimed at divers. Ivar’s endures waterfront makeovers and changing tastes. It is a seafood security blanket against relentless change. In a city that is losing so much of its cultural and commercial heritage, Ivar’s finds a way to adapt and keeps going.

But wait. News comes that the Ivar’s outlet at Sea-Tac Airport is being booted. It lost out on a bidding process to continue as an airport concessionaire. Ivar’s is appealing the decision to the Seattle Port Commission claiming a flawed process.

The company charges the bid process was a sham, that the panel considering bids was unqualified, and that the bid criteria were unfair. Ivar’s positives were largely ignored, they claim, such as the amount of money they make for the Port, and their popularity with customers.

There are a number of salutes on YouTube to Haglund's "Acres of Clams" song. This is by Kevin Ring/Ring Digital

According to Ivar’s, the bid panel also concluded that Ivar’s “branding” didn’t “keep up with the airport’s improvements.” Really? So, is Ivar’s being replaced by gentrification? The airport is too good for Ivar’s now? Please.

The controversy may even become an issue in the campaign for Port Commissioner. Port candidate Peter Steinbrueck — who is in an eight person race — issued a statement this week saying he is joining the “Chowder Rebellion.”

The name Steinbrueck is long associated with standing up for local institutions. Peter and his father Victor were keys to saving the Pike Place Market, not once but twice. Victor fought against redevelopment of the Market in the 1960s; Peter helped free it from the clutches of predatory New York investors in the late 1980s.

“Our airport needs to welcome visitors by giving them an authentic shopping and dining experience that is deeply rooted in our culture,” says Steinbrueck in a campaign press release. “I am saddened that the Port has told Ivar’s to go dig for more clams!”

Ivar’s has always been a great guerrilla marketer and perhaps it can turn this lemon into a fresh batch of clam nectar. According to the company, more than 8,000 citizens have contacted the Port in defense of Ivar’s.

The Port defends its process and according to KIRO says that in the future that want to develop a “‘Northwest sense of place’ in the next round of airport concessions.” The Port has also pointed to its efforts to include women- and minority-owned operations.

Is Ivar’s making a big shell midden out of a molehill? Was the process truly fair, and the local chain simply failed to meet reasonable criteria? The ruckus over the process will tell us more.

But it’s hard to avoid seeing this as emblematic of the larger issues of displacement many are feeling in the city — issues that go way beyond fish and chips.

Seattle has many virtues, but it also has flaws. One of those is a general sense that everything should be shiny and new. Look at South Lake Union. We’ve brought a suburban antiseptic aesthetic into the city and pumped it up with steroids. We’re losing FX McRory’s, the Guild 45th is closing, the Central District is being gentrified, weird Fremont isn’t so weird anymore and the U District is becoming a platform for high-tech. Little Saigon is ground zero for redevelopment.

OK, things change, and not all for the worse. But time and again we’ve found that being “world class” really means being unique, being local, keeping some traditions because they are the kind of cultural touchstones that define urban place, and also encouraging new ideas from the grassroots. That’s where Ivar’s sprang from. These are the things that make us unique.

These shifts of the city’s fabric suggest the “Chowder Rebellion,” like Ivar’s clams, might have legs beyond a fish & chips stand in a Sea-Tac terminal.