Arena fight: Not over till the council says it is 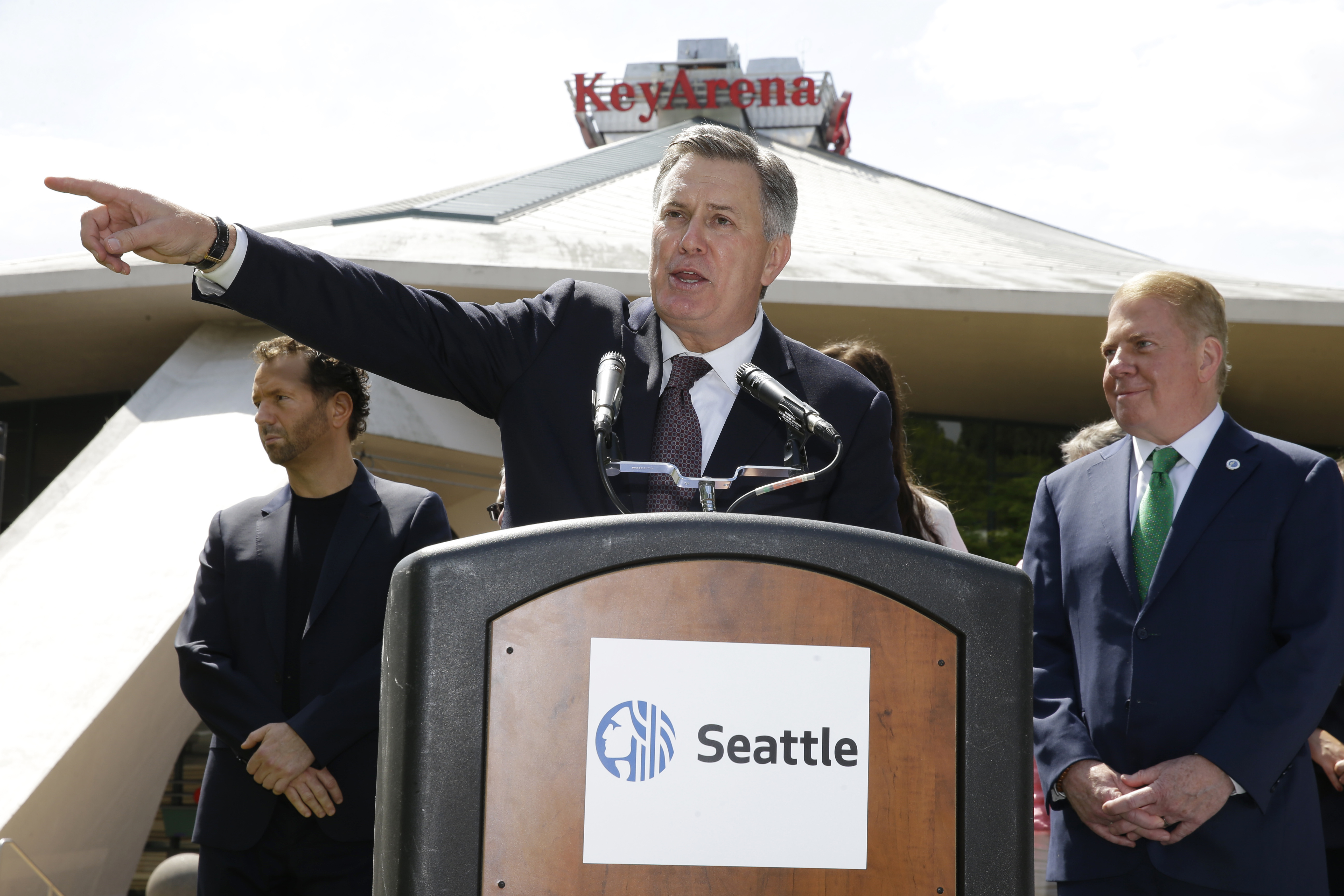 Tim Leiweke, CEO of the Oak View Group, center, speaks during a news conference as Seattle Mayor Ed Murray (right) looks on in front of KeyArena.

For a man whom everyone figured was home beating on the figurative chest of his inert SoDo district arena project, waiting for a heartbeat, Chris Hansen was remarkably serene Wednesday. And that was right after a rival arena project was celebrated by the mayor and his staffers as a deliverance on a righteous crusade.

"There's one very important difference with our project," Hansen said. "We are doing this for civic reasons. Economic return has never been the most important part of this for me. We can afford to do it and we should do it."

It was barely four hours after Mayor Ed Murray officially announced that the Oak View Group had won his recommendation to nip and tuck the aging KeyArena under its old roof into world-class grandeur — for $564 million.

Hansen, a Seattle native and Roosevelt High grad, conceded nothing during an interview on the Seattle Channel's Civic Cocktail program, and lamented little regarding the project in which he has invested six years and $125 million in SoDo real estate purchases. It may be because, as someone on his team said privately, "It's just the second inning."

That's what he said: An effort to create a fresh home for the NBA that began in late 2011 has reached the second inning of game — one that Hansen insists is far from over.

What happened Wednesday, despite a lot of self-congratulations among Murray's staff and Center employees, was merely a determination of who was up at the plate. It is Tim Leiweke, CEO of Oak View and a rhapsodizing speaker who, to hear him tell it, knows just about everyone in the worlds of sports and music and swoons at the wonderfulness of Seattle.

If name-dropping were an Olympic sport, Leiweke would be Michael Phelps.

Give Leiweke credit: He dazzled Murray, a man who could use some dazzle as he seeks to tie up his dwindling political career with something other than a sex scandal. Leiweke understood the task and stayed on point, while Seattle Partners, the temp name for the partnership between Anschutz Entertainment Group and Hudson Pacific Properties, apparently had a revolving door of swells dealing with the city.

Said one city staffer who followed the proceedings, "There were a lot of rotating suits with AEG. Leiweke stuck with it."

But the competition wasn't all that rigorous. Seattle Partners was doomed from the onset with its request for $250 million in municipal construction bonds, a public contribution that flew in the face of city restrictions. Hansen made a similar request in his original SoDo proposal, but submitted a revised pitch late last year that was all private money. That offer is still in the hands of the city council.

Speaking of the city council, guess which members were at the carefully choreographed ceremony on a Center lawn on a sunny day? None. This was the Ed Murray Show, not to be confused with the Ed Sullivan Show, although the parade of black Escalades that brought the big shots to the stage left a show-biz impression.

Murray's recommendation goes to the council, which, as with the mayor, is genetically predisposed to liking any offer of private money to upgrade the Center, a public park. But it is not obliged to accept anything Leiweke offers merely because there is no Key competitor.

"You give somebody a monopoly in a market like Seattle, and you give no other avenue, it tilts the balance of power in those negotiations," he said. He knows his SoDo plan will be the only leverage available to the council, which is unlikely to pay any attention to the mayor since his clout went away with his decision not to seek re-election.

The one thing Murray said that sounded as if he wasn't star-struck was a warning, in response to a media question, that "if we can't solve the transportation and financial issues (with OVG's proposal), it's a deal-killer."

Those are the principal areas where OVG is light on details. A community group made up of residents and businesses nearest the Center, the Uptown Alliance, sent a letter to Murray last Thursday saying both KeyArena proposals were inadequate on the topics.

It is up to the council to negotiate with OVG for the final deal, which also likely includes a determination of responsibility for the inevitable cost overruns. In the media scrum after the ceremony, I asked Leiweke, whose proposal was vague on the point, who pays.

"We will," he said, although he was looking down at his shoes when he said it. Which prompted a follow-up: Is there a financial point beyond which OVG will not go to create this "top 10 in the world" palace? "We have a high," he said, "and a low."

That gets close to the rub on the OVG proposal: If the $564 million bid was inadequate on matters of transportation, neighborhood integration and revenue redirected to OVG from city taxes, what happens when costs are affixed to resolving those shortcomings?

Hansen offered his thoughts based on the OVG financial projections disclosed to the city. "[Something] that surprised us [was] the net operating profit of $5 million on $247 million in equity," Hansen said. "That's not a good return for a for-profit enterprise. That's like, 2 percent. MSG [Madison Square Garden, a funding partner in OVG] is a public company, and to put up that kind of money, there must be something more to this."

Hansen was setting up a point that OVG deserves the same scrutiny from council and the regulatory agencies as his SoDo project received through a two-year environmental impact statement and a financial scouring.

Which gets us back to the point about the second inning. Much buzz attended word from Leiweke that two billionaires with a hockey passion, Hollywood producer Jerry Bruckheimer and investment banker David Bonderman, the latter a University of Washington grad, were partnering with OVG to be potential principals in owning a National Hockey League team in Seattle.

Those names are nice for splash, and help deflect criticism from the sports community that the OVG proposal over-emphasizes the concert business at the expense of sports usage. But brandishing the names creates an impression that the deal for a Key remodel is more done than it is.

Leiweke is trying to create irreversible momentum for the project. But it cannot escape the same Seattle slog of process that Hansen experienced. That means that even if Leiweke answers the hundreds of questions his proposal has yet to answer definitively, the NHL at the Key is still four years away, at best. Picking owners for something that doesn't exist has no practical virtue.

He’s done well in fourth-quarter comebacks. Now he and Hansen will try from the second inning.