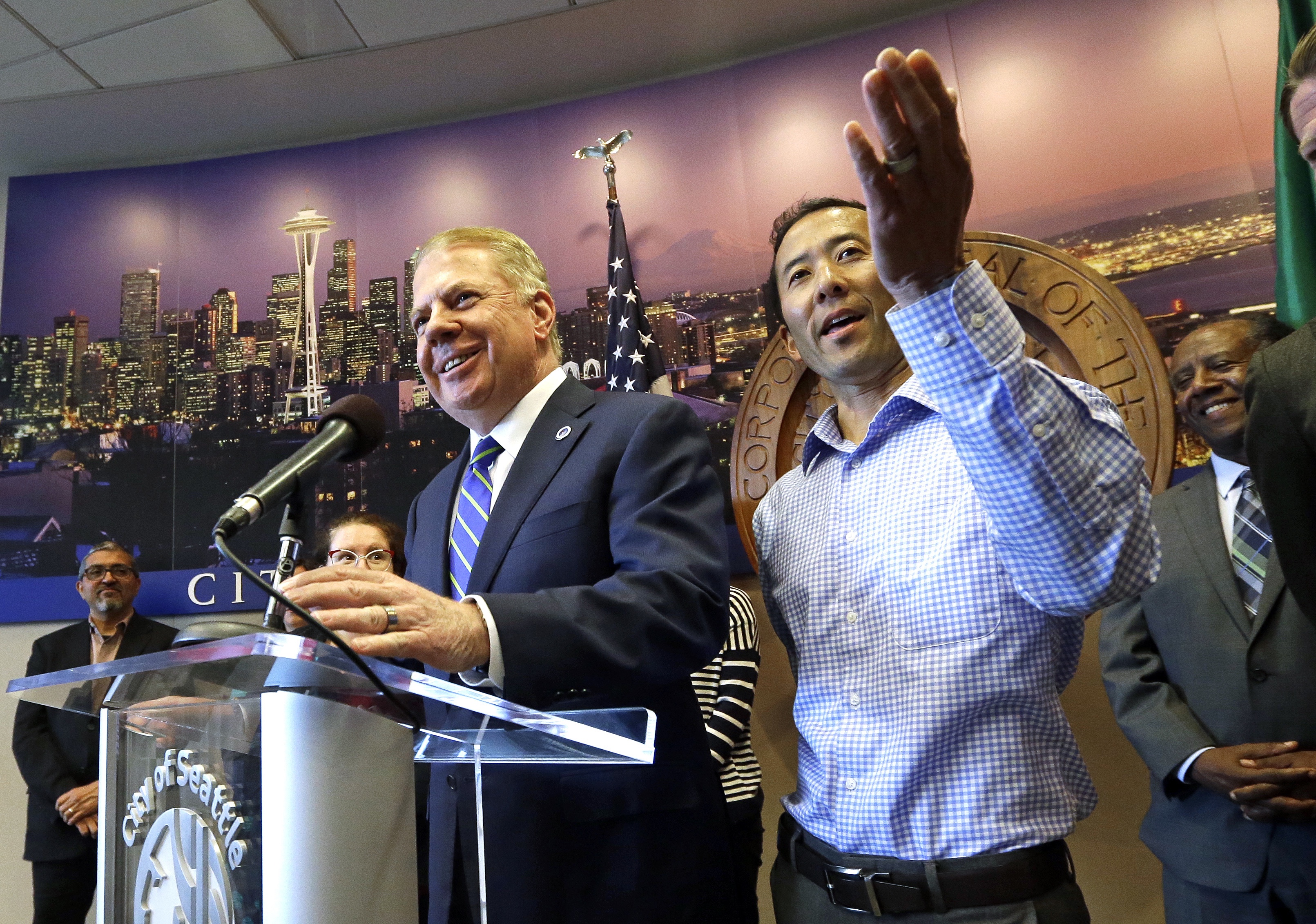 Seattle Mayor Ed Murray, left, smiles as his husband Michael Shiosaki motions while briefly answering a question at a news conference at City Hall on Wednesday.

The man who accused Mayor Ed Murray of sexually abusing him in the 1980s withdrew his lawsuit Wednesday.

The accuser, who was under age at the time, promised to re-file once Murray is no longer in office, according to the Seattle Times, which first reported the development.

The legal case had led to Murray's decision not to file for re-election.

In fact, Murray did not rule out launching a campaign as a write-in candidate for mayor, saying simply he did not know at this point.

Asked if he feels vindicated he said, Yes, "I believe it vindicates me."

Although four men have come forward in recent years to accuse Murray of abuse, only one, Delvonn Heckard, took the matter to court. The bombshell filing last April was assumed to have effectively ended Murray’s political career. Murray has strongly denied all allegations, but regardless announced in May he would not seek re-election.

The withdrawal of the lawsuit means Murray does not currently face any legal challenges.

Heckard’s attorney, Lincoln Beauregard, could not immediately be reached for comment. But in a court motion, he said Heckard wanted to complete counseling and therapy before proceeding. The motion refers to "extensive" counseling but does not specify its nature.

In series of posts on Twitter, Beauregard elaborated: “Delvonn Heckard is only delaying his lawsuit until the Mayor is out of power. Delvonn wants to finish counseling and spare the City more theatrics with the sitting Mayor. We, Delvonn and his legal team, will never give up, and never stop fighting.

"We don't want the City burdened with a Mayor having to admit the truth under oath when he's deposed. Seattle doesn't need that right now -- so Delvonn decided to delay the case a few months. Delvonn's goal was to spread the truth -- the Mayor's decision not to run for reelection proved he was heard! Justice!”

Murray's spokesperson, Jeff Reading, responded to Beauregard's tweets, saying in a statement, "It is shocking to our democracy for Lincoln Beauregard to declare, as he did on Twitter today, that, in denying Seattle voters the choice to re-elect a popular and successful mayor, justice has been served."

Although the fever pitch reached in the media and local politics as a result of the allegations has cooled since Murray withdrew, the story has largely dominated city politics since it broke in the Times this April.

The case was not slated to go trial until well into 2018, but Murray’s profile has always meant his supporters’ hopes for “due process” were essentially a fantasy: Neither side of the lawsuit has shied away from taking to the press to bolster the case. King County Superior Court Judge Veronica Alicea-Galván sanctioned Beauregard with a $5,000 fine for filing unnecessary court documents to rally media coverage, a charge Beauregard disputes.

Murray hammered on this point Wednesday, accusing both Beauregard and the Seattle media of creating a story that wasn’t there. Murray’s husband, Michael Shiosaki, who has often expressed anger on both of their behalf through this whole case, was unequivocal in answering “yes,” to whether they were angry.

But Beauregard has also accused Murray’s camp of twisting media to their advantage. In the motion, he said the coverage has “tainted the jury pool with false information about the accusers, including Mr. Heckard. Therefore, as the trial is set to occur in King County, Mr. Heckard believes that a short delay in the trial date would prove beneficial to the administration of justice.”

Murray arguably damaged his reputation most with his response to the allegations this spring, at one point pointing to the accusers’ criminal histories as proof that they could not be trusted. Even among those willing to grant Murray his due process, his response spurred calls for him to not seek re-election.

One of Murray's other accusers, Maurice Jones, provided a statement of his claims in conjunction with Heckard's case. Two other accusers, Jeff Simpson and Lloyd Anderson, did not file claims in Heckard's case. A lawyer for Simpson told the Stranger he believed his client's allegations, but the statute of limitations had already passed in Oregon, where Simpson claimed he had received money from Murray for sex.

Again, Murray called it all false, blaming in part the media in addition to Beauregard. He suggested that he had never led the kind of furtive life that the charges might have suggested. "I was out in 1980; I was an out gay young man in my 20s and early 30s," he said. "I was out and politically involved in this city and in Portland. I was not in the closet, I was not in the shadows. I was dating. We were having fun."

Since Murray dropped out, 21 candidates for mayor have flooded the field, with six widely believed to be seriously campaigning. Former U.S. Attorney Jenny Durkan has quickly picked up the mantle of most prolific fundraiser from Murray, amassing more than $190,000 since she jumped into the race. Cary Moon has the second most, with just over $80,000. Attorney Nikkita Oliver has raised just over $50,000, former state representative Jessyn Farrell has nearly $46,000, and former Mayor Mike McGinn has raised $27,000. State Sen. Bob Hasegawa is not allowed to engage in fund-raising so long as the Legislature is in session.

Before he dropped his campaign, Murray had an enormous advantage with over $400,000 to his name. He's said publicly his decision to run was based on polling that showed winning would be a challenge. It remains to be seen if the most recent news would change those chances, although if he does decide to run as a write-in candidate, he would face the additional disadvantage of not being on the ballot.