The Race to Alaska is a 'call to the heart' 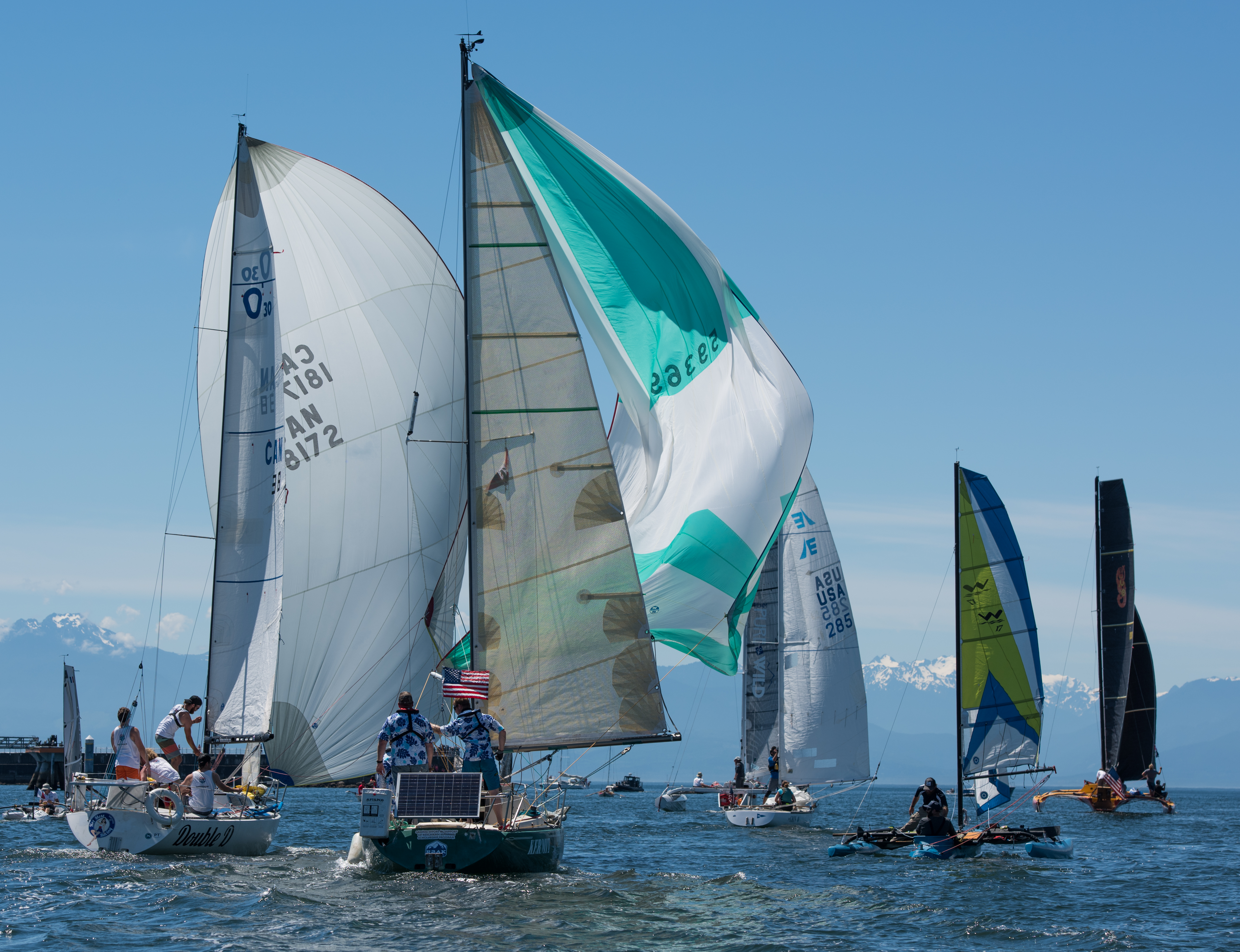 Sailboats are seen during the stage two start of the 2016 Race to Alaska.

This story originally appeared in The Port Townsend Leader.

There is something Northwest boaters need to understand about the Race to Alaska, says Daniel Evans: The R2AK is not a race.

OK, people often call it a race. There’s a starting line, after all, a starting line on the Port Townsend waterfront where, in the first light of June 8, some 64 vessels ranging from rowboats to world-class racing craft will jockey for position. On signal, the crews will sail, paddle or row – but certainly not motor — across to Victoria, B.C. Three days later, most of them will set off on the 600-mile course north to Ketchikan and whoever arrives first will collect an oversized check for $10,000.

All of which looks a great deal like a race. But, “race boss” Evans repeats, it is not.

So then, what the heck is the R2AK? “It’s a call to the heart,” he says. “We give people license to push their personal limits.”

To understand this, consider Daniel Evans’ extraordinary seafaring resume, which reads a bit like a Joseph Conrad novel. Over the past 25 years or so, he has paddled, sailed and skippered boats ranging from canoes to cruise ships in waters from Alaska to the North Atlantic and the Caribbean. He has climbed mountains and skied down them. In most cases, he has lived these adventures as a leader and teacher, inviting people to test themselves against the world and its elements.

And the lessons he has learned and taught are the essence of the Race to Alaska.

A tall, lanky 45-year-old with wire-rimmed eyeglasses bracketed by a head of black curls, Evans is the co-founder and chief organizer of the 3-year-old R2AK at the Northwest Maritime Center in Port Townsend.

He grew up in Anchorage, but spent his summers sailing a vintage plywood Thunderbird with his grandparents around Gig Harbor. After high school, he worked as a longshoreman in remote Dutch Harbor where you’d think he would have got his fill of stormy seas. But his voyage had barely begun.

“I understood wilderness, but I didn’t know the world,” he says. “So I bought a Harley and traveled the country. I think that’s where I really developed the desire to experience things firsthand.”

In 1992, he enrolled at Evergreen State College in Olympia, living cheap on a 28-foot sailboat, climbing mountains in his spare time. While still in school, he took a job at Outward Bound, which seeks to build character and leadership by teaching young people to fend for themselves in the outdoors. There, he taught courses in mountaineering and seamanship, and met fellow trainer Jake Beattie. The two became close friends.

From there, Evans moved to schooners, the grand double-masted sailing ships that have become central to Port Townsend’s cultural identity. For most of a decade, he worked on and skippered schooners on both coasts, including four years as captain of the local Adventuress. Those magnificent boats helped refine his focus on teamwork and character.

Meanwhile, Beattie pursued an equally unconventional career, landing eventually as director of the fledgling Northwest Maritime Center. Three years ago, the old friends sat down in Port Townsend and talked about Beattie’s idea of an unmotorized race to Alaska. The idea was a long-distance race with few rules other than to ban engines or motors of any kind, offering people a challenge that focused not on horsepower, but on human endurance and ingenuity.

Evans was captivated. “I loved being a captain on a sailing ship,” he says. “But I couldn’t resist the R2AK.”

He traces the idea back to Outward Bound founder Kurt Hahn, who had observed that, when ships were torpedoed during World War II, it was the younger crew members who died; older crew were more resilient.

“The younger guys didn’t know what they were capable of,” Evans explained. “So we talked about the R2AK as a sort of Outward Bound course.”

The two spent months planning the event and spreading the word.  Two years ago, more than 100 sailors and paddlers and rowers arrived in Port Townsend with their odd array of unmotorized boats, and the R2AK became a reality.

Appropriately, Evans and Beattie faced their own first trial in the crucial minutes before the start. In the predawn darkness, the old friends were perched in the pilothouse atop the Maritime Center, studying the marine forecasts and weather radar, apprehensive about a fierce northwestly whipping down the Strait of Juan de Fuca. Their dilemma: Postpone the start for a day, or send 100 souls out into harm’s way, combating the wind and frothy four-foot seas.

It was a wild day.  Some smaller boats didn’t make it past the Point Wilson lighthouse. Others washed up on beaches from Dungeness Spit to the San Juans.

But most made it to Victoria. Nobody was hurt, and that first year’s R2AK, chronicled in media and on the R2AK online website, captured the imagination of armchair adventurers literally around the world.

Last year’s event went more smoothly, thanks to lighter winds. But it raised another challenge unrelated to weather: The first two races were both won by high-tech, expensive multihull machines that made it to Ketchikan in a few days, leaving the competition to slog northward in their wakes. What’s the point if 90 percent of the boats have no chance?

As they waited for boats to cross the line in Ketchikan, Beattie and Evans brainstormed, groping for a plan that might reward contestants who were unlikely to arrive first. Their solution was a buyback plan, an additional $10,000 to the first crew that arrives in Ketchikan and agrees to sell its boat — be it a million-dollar racer or a battered kayak — for that $10k. “No questions asked.”

Will it work? Who knows? But another 64 boats have signed up this year despite the fact most know they can’t win the race.

But then again, it is not a race.

“It’s a call to the heart,” Evans reminds us. “A personal challenge.  These are people who yearn to be hungry and wet and cold.”

It hearkens back, he says, to the British adventurer Ernest Shackleton, who a century ago advertised for crew for his Antarctic expedition this way:

And, Evans notes, hundreds lined up for the opportunity.