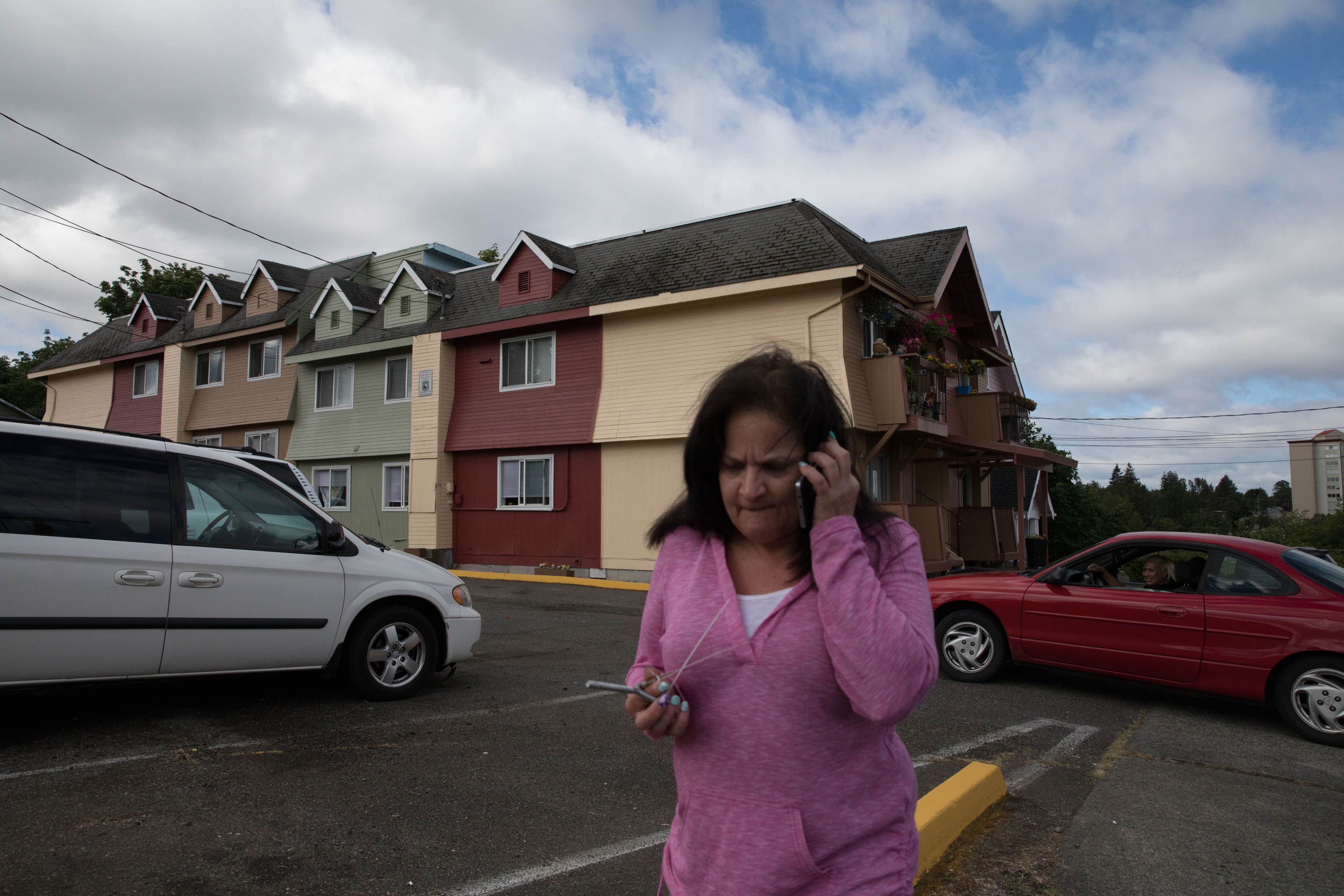 Tammi Lynn, a landlord, rents her apartments to those on the verge of homelessness.

For Tammi Lynn, property management is a family business. Her mom, her dad, her stepdad, her daughter, her niece — all of them, over the course of 30 years, have bought and sold properties, gutted interiors, smoked out cockroaches and termites, cleared away garbage, weathered the occasional shooting, and, to hear Lynn tell it, built relationships with the tenants who come and go.

“We got it cleaned up and now everyone in the neighborhood loves us,” says Lynn, sitting cross-legged in a remodeled apartment building on the east side of Tacoma, beneath paintings of a New England bay.

It’s been hard work, but the four once run-down buildings Lynn and her family own around the south end of Puget Sound — now done up with new interiors and colorful trim — are profitable now. They’re likely to get more so as the region’s runaway real estate market, centered in the tech boom town of Seattle, drives people farther to the fringes in search of affordable places to live.

But as that same real estate explosion sends more people to the streets, local governments are putting a lot of hope in private landlords like Lynn to be a major part of the solution to a growing regional homeless crisis — a problem so pervasive, and so stubborn, that Seattle and its surrounding King County have been in an official state of emergency for more than a year and a half.

Last summer, a massive audit of the region’s homeless response dragged the city and county across hot coals for their continued support of what auditors saw as an ineffective and expensive system, one based less on results and more on tradition, the authors said.

If Seattle has failed to put roofs over people’s heads, it hasn’t been for lack of trying. Since 1981, Seattle has approved five tax hikes to build affordable housing. The biggest came last summer, when voters signed off on a $290 million property tax bump. The city brags that this money has created about the 13,000 affordable units.

But for every person who moves into a freshly minted affordable apartment, another one or two fall out. The latest count of King County’s homeless population found 11,643 people living on the streets. Of those, around 5,000 were newly homeless, meaning that they landed on the street in the past year.

In other words, despite the large investments, publicly subsidized affordable housing has not kept up. Which is where Tammi Lynn and other private-market landlords come into the picture.

In an attempt to achieve results for less, the county is turning toward “rapid re-housing,” an approach that short-circuits emergency shelters and “transitional housing” programs and moves people directly into the private market with financial help from local governments and nonprofits. The help comes with a timeline — anywhere from one to 18 months. At the end of the period, the tenant is expected to figure out how to pay the entire rent.

The model, which was rolled out in force with bailout money after the financial crisis, has been wildly successful for some populations. The State of Michigan reported that, of 2,000 rapid re-housing clients, only 6.5 percent returned to homelessness. Hennepin County, Minnesota, reported similar success. In a year-long pilot project in Seattle run by the Downtown Emergency Services Center, 96 percent of its rapid re-housing clients did not return to homelessness, according to staff.

Some question how well the program can scale up to address the needs of people who have been homeless for a long time, or who struggle with mental health issues or addiction, especially in a hot housing market. One provider described rapid rehousing as “skimming the cream,” or tackling the simpler cases. A report out of Washington D.C., which similarly battles high housing costs, declared the strategy a failure, mostly because families with little or no income couldn’t get on their feet fast enough.

And there is another major concern: In a scorching real estate market like Seattle’s, how do you get landlords to rent to people who they may see as high-risk?

“We have ... a very competitive retail market, extremely low vacancies and rapidly rising rent,” says Mark Ellerbrook, King County’s regional housing and community development manager. Landlords often have the pick of several prospective renters, he says. “When you have an environment like that … it makes it very competitive.”

But when a landlord considers housing the homeless, there are a number of perceived risks, the most obvious being: Will that person be able to pay rent when the support vanishes? In addition, landlords often want to see good credit, a consistent rental history and steady income. Most applications include background checks. It is often some combination of those flags that lead someone to homelessness in the first place.

So what’s the motivation for a landlord to buck the normal routines and agree to house someone who would not otherwise be able to find a home?

On the east side of Tacoma, historically the cheaper side of the blue-collar manufacturing and port city, Lynn can now comfortably charge $995 per month for a two-bedroom apartment. She doesn’t need to worry much about filling her apartments, nor does she need to take on much risk: When there are multiple applications for every apartment, why not accept the person who, at least on paper, looks like the surest thing to pay rent on time and stick around?

Yet Lynn happily rents her apartments to people either coming out of homelessness or right on the verge.

For Lynn, there’s a backstory. One day, back when her mother was the primary manager of the family’s buildings, there was a knock on the door. It was a man struggling with homelessness. He didn’t have much, but a nonprofit had agreed to help him with the upfront costs and, temporarily, with the monthly rent. As the man got on his feet, the nonprofit would pull back the safety net and he would eventually pay his own rent.

When the man came knocking, Lynn’s mother thought of her own daughter, Tammi, who had been through some hard years.

“I’ve not been a total angel my whole life,” Lynn says, sitting beneath portraits of horses and scenes of pastures in one of her vacant apartments. “My mom saw that people can have things on their records and still turn their lives around.”

So she agreed to house the man.

More than 20 years later, Lynn and her family maintain a partnership with Solid Ground, a housing resource nonprofit. Currently, only two of Lynn’s apartments are dedicated to rapid re-housing, but that number fluctuates.

Asked why she continues to participate in the program, Lynn frames it as charity: “It is a business,” she says, “but you’ve got to have a conscience.”

King County began experimenting more broadly with rapid re-housing in 2010, thanks in part to money received through the bailout package passed after the housing crisis. To recruit landlords, the county developed a menu of assurances: There’s a mitigation fund in case a client abuses an apartment; the county and nonprofits also have liaisons to go between the tenant and the landlords to handle any issues.

As a result, says the county's Ellerbrook, the county has kept landlords at the table. Currently, he says, 200 property owners participate in the program.

To attract and educate more landlords, Seattle and the county are rolling out a new Housing Resource Center.

Robin Koskey, a strategic advisor for Seattle's Office of Housing, told the Seattle City Council recently that they've been conducting listening sessions with landlords to find out what would help. To the surprise of government officials, said Koskey, landlords were not necessarily looking for financial bonuses, but instead guarantees of quickly filled vacancies and reimbursement for any damages or unpaid rents, Koskey said. "They were very clear that they wanted to help," Koskey said.

But there is another uncomfortable reality of rapid re-housing that is not always acknowledged: For local government and nonprofits with limited resources, the best options for private landlords are outside of Seattle. Rents inside city limits are just too damn high.

Lynn’s properties are scattered in Tacoma and Algona, 30 miles from downtown Seattle, and even there, the real estate market is catching up.

Ellerbrook acknowledges this concern. But for officials desperate to make progress on the housing emergency, geography is secondary to housing.

Down the road from Lynn’s east side Tacoma apartment building, new condos have blocked the view of the city. The developer made an offer on her building as well, but she refused. Since then, she estimates she gets about two offers a year. “We could make a big profit,” she says, “but this is a family business.”

She’s still got energy to do the work now, but says some weeks it is tempting to sell. If her nieces and grandkids don’t want to take it over, she can imagine that temptation growing.

Ellerbrook says the county has been able to strike up relationships with owners of newer buildings and is optimistic they can recruit more. Still, he says, “It’s critically important to us that we work to preserve that housing that we have. When you knock that down … it’s more challenging for us to support a homeless household.”