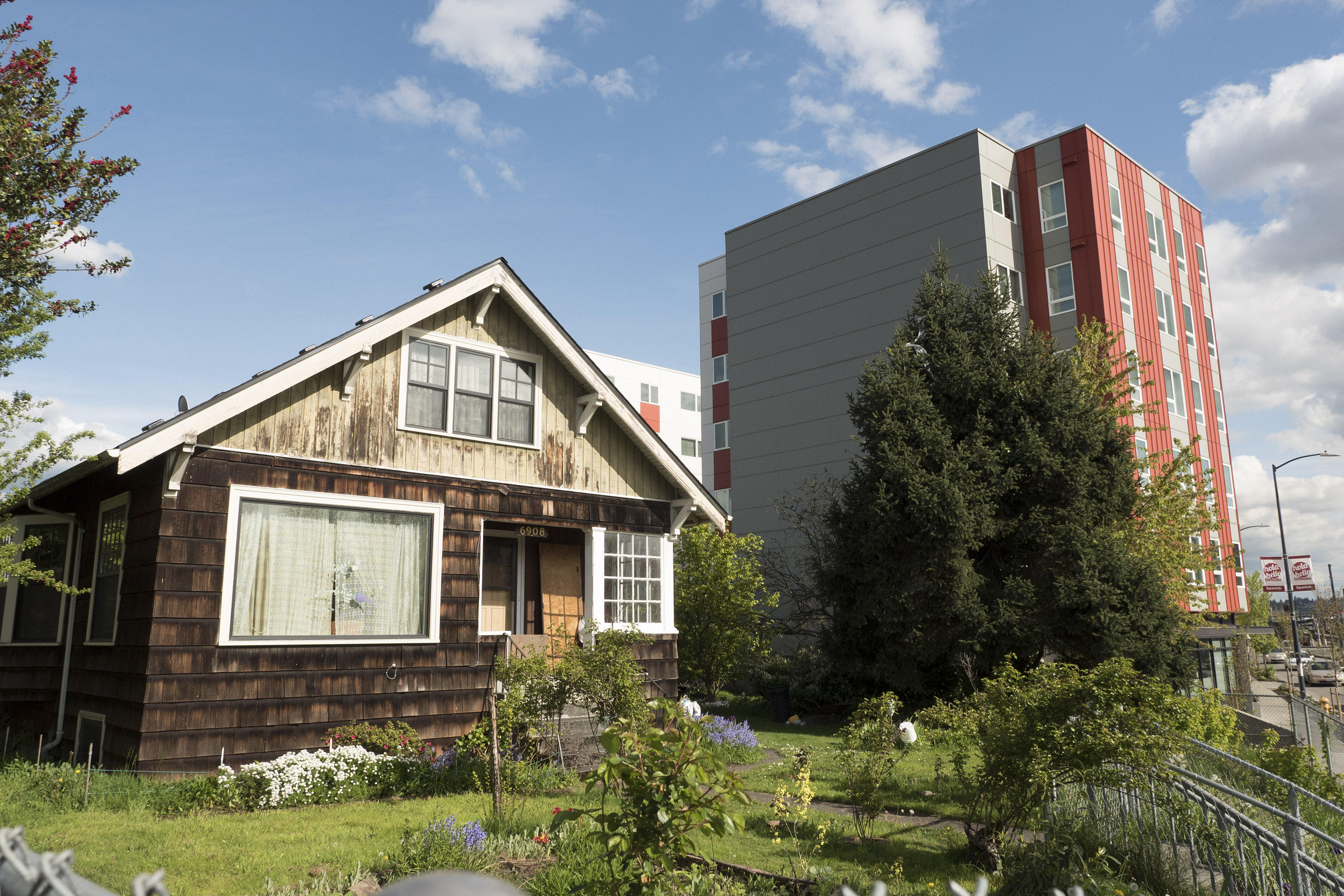 A recently completed Mercy Othello Plaza housing development in Seattle's New Holly neighborhood is seen next to a small house, that according to property records was built in 1916.

The first thing to know about Seattle’s dramatic plan to get developers to build more affordable housing — a plan celebrated by some and loathed by others — is it won’t fix the problem.

The policy, referred to as a “Grand Bargain” between for-profit developers and housing advocates, is a crowning achievement of Mayor Ed Murray’s term that trades density for affordable housing. It’s perhaps the most dramatic step ever taken to add more affordable housing in Seattle. Yet in a 460-page report released Thursday, the city itself acknowledges “Seattle will continue to face housing affordability challenges” regardless.

The question, then, is not how to fix the housing crisis, but rather what can be done to do the most good? It’s through this lens that the city considered three alternatives for how to move forward with this so-called grand bargain in its report:

It’s been nearly two years since a group of housing developers, advocates and wonks struck the Grand Bargain — a deal that mandates for-profit developers either build affordable housing or contribute to a housing fund. The program is known as Mandatory Housing Affordability (MHA). In exchange for not filing suit against MHA, the developers get to build larger and more profitable buildings.

The plan is built to capture momentum around development and spin it into cheaper living, denting Seattle's housing crisis.

The Seattle City Council has already passed changes saying yes to increased density in the University District, Downtown and South Lake Union. But what comes next? There are 27 different neighborhoods awaiting their fate and a whole lot of hand-wringing in the meantime.

According to the city’s analysis, letting the city develop without interference would net only 200 privately-developed affordable housing units; 200 units over the next 20 years in those 27 neighborhoods, an anemic pace by any measurement.

If MHA is allowed to expand to the rest of Seattle, as it likely will, the city estimates it would produce some 5,500 affordable units. That, combined with skyrocketing rents — every city in the Puget Sound region has hit record real estate prices, according to the Seattle Times — and the problem won't be fixed. But the hope, says the city, is the plan can work in tandem with publicly funded housing to make at least some impact.

Displacement — longtime residents being forced out and newer, wealthier people moving in — is the starkest symptom of the affordability crisis as the city becomes wealthier and whiter. Even with the lofty affordable housing goals set by Murray, the solutions can often feel like field dressing a bleeding wound.

In apparent acknowledgement of this, one of the two scenarios for expanding MHA consciously considers easing the pressure on poorer neighborhoods at high risk for displacement, like Rainier Beach, Othello and Westwood–Highland Park, and directing more density toward wealthier neighborhoods like Wallingford or Greenlake.

The other scenario considers what would happen if those factors were ignored and density was added regardless of the neighborhood's struggles with gentrification.

The difference is relatively minor, according to the report.

By spreading new density across Seattle without paying mind to some areas' histories of displacement, the city could add 5,836 new affordable units. The total proportion of new construction in wealthier neighborhoods would be less.

The other option may add more density to wealthier neighborhoods such as Fremont or Queen Anne and less in poorer neighborhoods. The end result would net fewer total affordable apartments, although at 5,765 units, not by much.

The roadblock of MHA has often been, what happens to my neighborhood? In North Seattle, signs with bulldozers warn of the coming changes. The report says as much: Continuing forward with MHA, it says, “could result in more total demolished units” than doing nothing.

The city calculates that by moving forward with MHA, every demolished unit would be replaced with 14 new ones, versus only 10 if the city were to do nothing.  The plan's ideal scenario: encourage more market-rate housing, ease competition and provide an affordable cache. If done well, the hope is overall displacement would decrease as housing stocks rise.

As the city shoulders construction crane upon construction crane and as the demolition of old buildings and displacement of longtimers is met with public outcry, the report attempts to quell some of that emotion by advocating for strong  tenant relocation assistance to help people move, if necessary, and for more preservation of housing that's affordable.

Will all that keep up with Seattle’s fierce housing market — in which a minimum wage worker must work 87 hours to afford a one-bedroom apartment?

Not likely, says the city: “The affordability of market-rate housing would continue to be a concern and a burden for many residents under all three alternatives, notwithstanding the significant contribution from implementation of MHA. This is a result of economic forces beyond the reach of MHA.”