The tiny-house village that started a movement 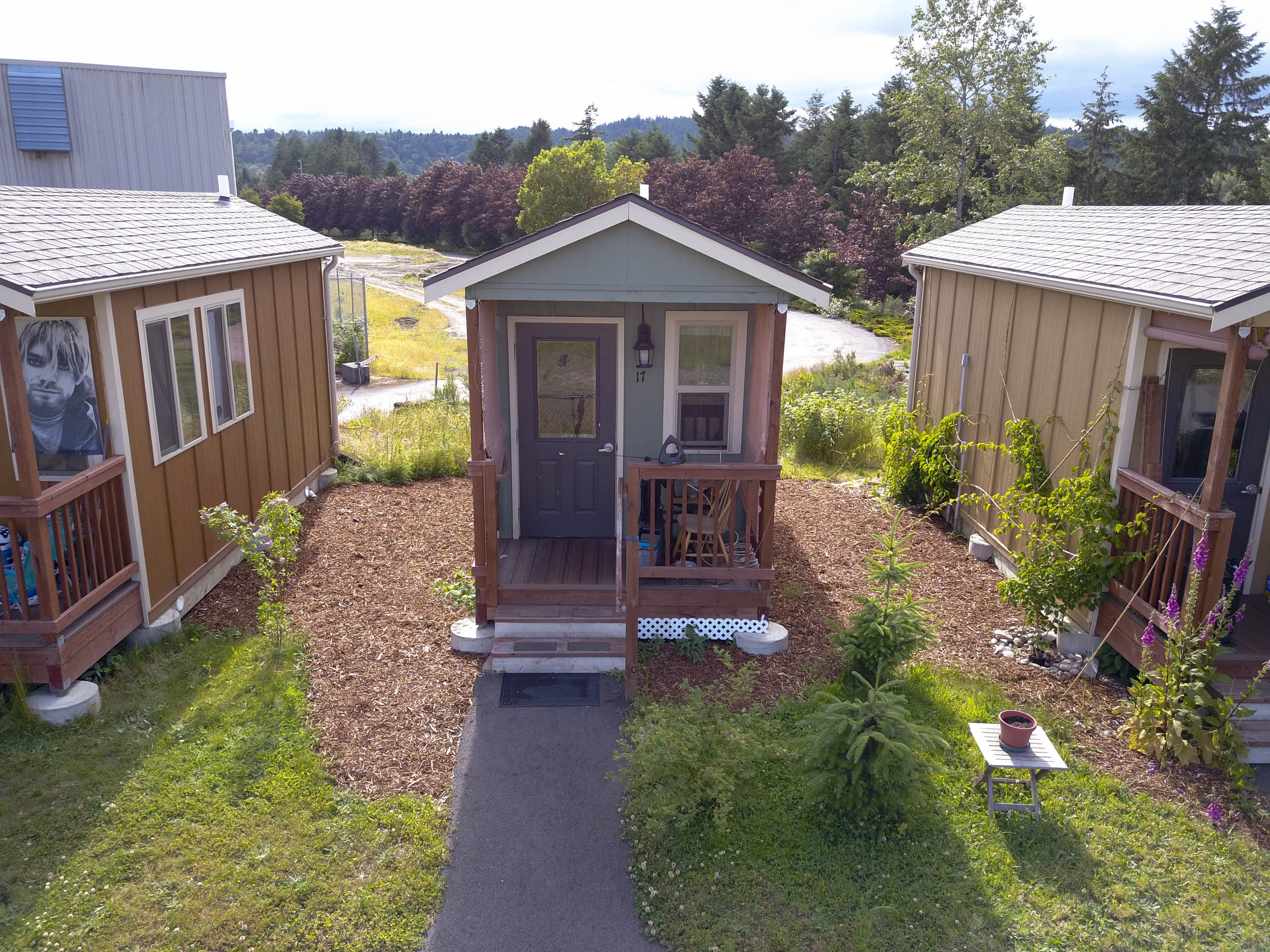 Tucked into an industrial complex a few miles from Washington state’s capitol building in Olympia is a grassy field ringed by 30 tiny houses, each 144 square feet, about the size of a small U-Haul trailer.

This collection of well-tended dwellings is Quixote Village. Opened on Christmas Eve, 2013, it was an early experiment in using miniature homes to house the homeless, a model that has since been copied around the country.

While few see tiny houses as a cure for an epidemic of homelessness that has plagued West Coast cities, for the residents of Quixote Village, these dwellings have been a godsend.

“It’s been a new lease on life,” says Byron Thorpe, one of the community’s original residents. “It was something I didn’t think I’d ever have a chance at again. If I didn’t, I wouldn’t have been alive these last two or three years.”

Each house is equipped with a toilet, a bed, a sink and a front porch facing out on the the shared green space, which is dotted with trees and flowers. A nearby community center holds a large shared kitchen and showers, and a separate space for watching television, holding meetings or participating in the weekly yoga class.

“It helps them to be independent and adds dignity back to their lives,” said Raul Salazar, the program manager at Quixote Village. “We’re giving them a life that is more traditional and normal, compared to always having to rely on someone else for the basic human needs in life.”

Quixote Village also takes an innovative approach to treating addiction. While many shelters and transitional housing services evict residents for using drugs, Quixote Village provides a safe and steady home to help them on the path to recovery.

For resident Jimi Christensen, Quixote Village became a respite  from a life on the streets where he often faced temptation to return to his old ways. “When I first got here I was still addicted, still kind of hopeless at that point,” Christensen said as he played guitar on his tiny house’s front porch.. “A place to lay my head at night and store my groceries is all I needed to get a jumpstart on life.”

Today, Christensen says he’s clean of alcohol and hard drugs. He is also attending life enrichment courses at Peace Center in nearby Lacey, Washington, to work on his leadership skills and look toward the future. He wants to become a teacher someday.

Since its start in December of 2013, Quixote has served a total of 61 people, including 41 men and 20 women. Panza requests that residents contribute 30 percent of their monthly income, but will not evict or turn people away who are out of work or disabled.

Quixote has received a lot of attention from around the region, says Jaycee Osterberg, resident advocate and case manager at Quixote Village, who often gives residents rides to attend classes or stop by the pharmacy for medications. “We are constantly being asked by other groups how we run our organization.”

As a result, Panza, the nonprofit organization that runs Quixote Village, plans to open two other villages in nearby Pierce and Mason counties.

With the 5,485 homeless people currently living in King County, tiny house villages seem like a drop in the proverbial bucket. But they’re having a real impact, according to Sharon Lee, executive director of the Low Income Housing Institute, which has built five tiny-house villages across Seattle-area neighborhoods.

“Our tiny house villages serve 300-400 people at any given time, but we touch the lives of 1,000 or more people over the course of a year,” Lee says. “We’re saving people everyday from the prospect of dying on the streets from exposure, violence and other issues.”

In addition to simple shelter, these miniature developments demonstrate the power of living in a community that understands and cares.

“The people here are what makes it a good place to live,” says Heather Ristow, who moved into Quixote Village about a year ago after living out of her van.

Ristow, Byron Thorpe, and Jimi Christensen congregated on a recent Wednesday evening with Raul Salazar and Jaycee Osterberg for a Village Life Committee meeting, where they made plans for the Quixote Village’s social events and discussed community issues. They talk about making a trip to Mt. Rainier National Park one day, and a Mariner’s baseball game sometime during the summer.

While Ristow enjoys the company, she doesn’t think she’ll be here long. She is hoping to find Section 8 housing that would allow her a private apartment with a self-contained shower and kitchen where she and her small therapy dog could live.

Thorpe, on the other hand, is here to stay. “I jokingly told them that I’m never going to leave,” he says. “There’s an oak tree right outside that we planted. You can spread my ashes there, I told them. And as far as I’m concerned, that’s good.”