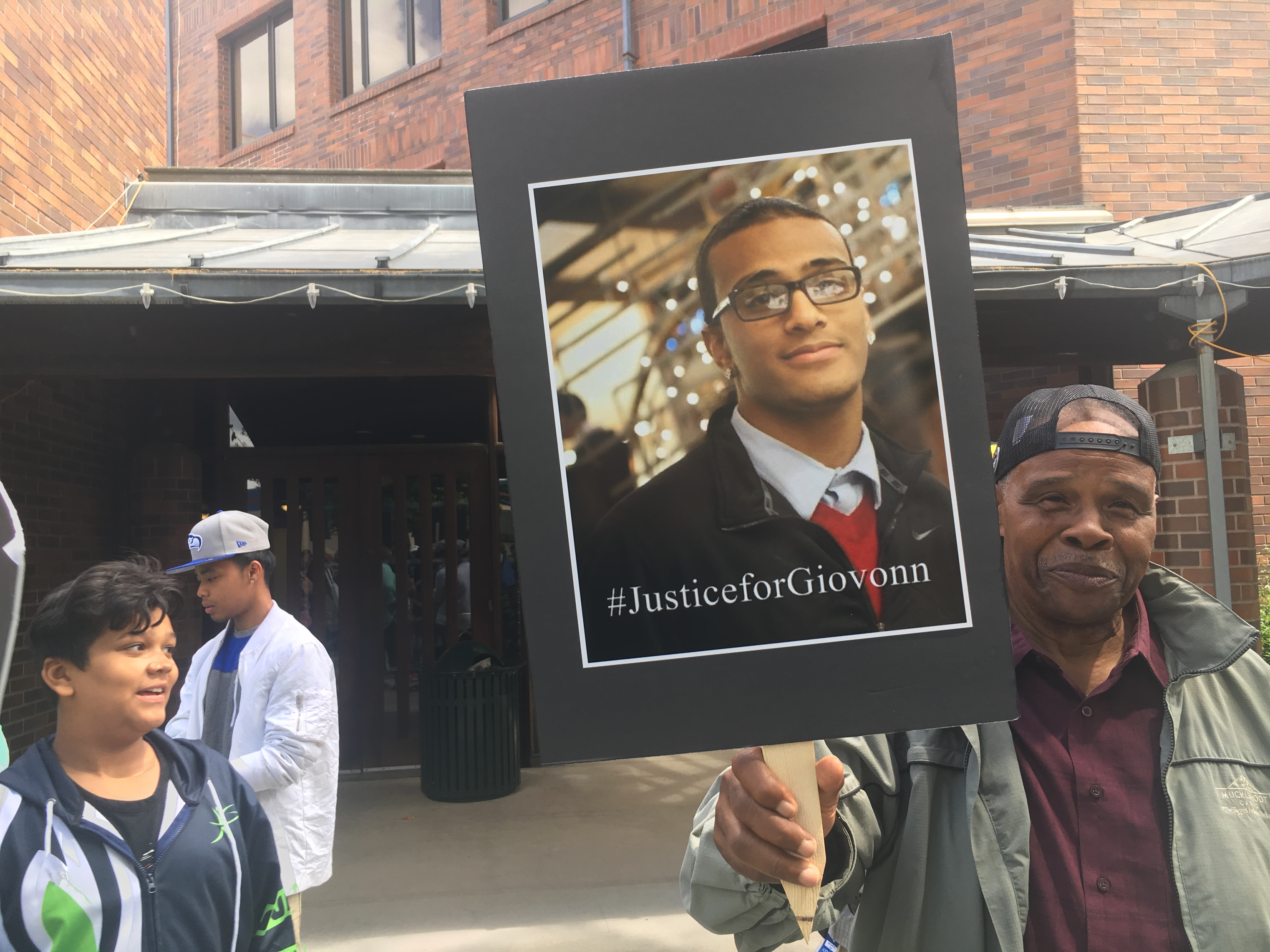 Supporters of Giovonn Joseph-McDade are questioning police conduct in his June 24 death.

From Magnuson Park, where Charleena Lyles was shot and killed by Seattle police last month, it’s a long drive to Kent, where police shot and killed Giovonn Joseph-McDade just a week later. But the families of each have found one another in recent weeks.

Joseph-McDade’s aunt, Saima Joseph, said Thursday that connecting with others who have been through the same tragedy is “really the only thing you can do.”

Outside the Kent Police Department on Thursday, some 30 people met to make the most public comments since the June 24 death of the 20-year-old Joseph-McDade, a Green River College student. There was family, like Saima Joseph and Giovonn’s mother, Sonia Joseph. There were friends, like Savannah Gilley. There were supporters and new friends like Kenny Pleasant from the NAACP, Seattle mayoral candidate Nikkita Oliver and Ximena Velasquez-Arenas, a representative from the recently announced initiative on misuse of force by police, De-escalate Washington.

There were also relatives of 30-year-old Charleena Lyles, including her cousin Katrina Johnson.

The statements were emotional. Joseph-McDade’s mother, Sonia, couldn’t finish what she wanted to say she was so overcome with tears. Between sobs she said he was a good kid who wanted to attend the University of Washington to get a business degree. “All that changed when he was shot by the Kent Police Department,” she said. They “ended his life and all of his dreams.”

“We’re standing here because we’re tired,” said Katrina Johnson. “We demand justice. … We’re not gonna stop until we get it.”

According to police reports, Giovonn Joseph-McDade was killed after his car was pulled over. For what is unclear, but he allegedly sped off. When the chase ended on a dead-end street, officers say he tried to ram them, so they fired, killing Joseph-McDade.

Passenger Devonte Cheeks was not hurt.

Grainy audio and nearby security footage provides an incomplete picture of exactly what happened that night. At Thursday's event, family members said they’ve received almost no additional information, relying largely on media reports. They say they're not even sure that Joseph-McDade was, as the police have said publicly, the driver of the car.

The two officers involved in the incident have been placed on administrative leave with pay, standard practice while a police shooting is under review. The nearby Des Moines Police Department is conducting the investigation.

Shortly after the public event, the family was scheduled to sit with the Kent police chief. Details of the conversation were not immediately released.

A movement has begun to take hold in King County and Washington more broadly, borne out of the deaths, in incidents with the police, of people of color. Many of them have been young, like Joseph-McDade and Lyles. After Che Taylor, 47, was shot and killed in February 2016, his brother Andre Taylor began Not This Time, which has worked to change state law to make it possible to prosecute police officers for deadly force without having they acted with deliberate malice. An initiative last year failed to get enough signatures. But the second attempt this year, the De-Escalate Washington initiative, takes a broader aim, requiring more training in addition to changing state law.

That movement has grown in recent weeks, with the families of  Lyles and Joseph-McDade joining Taylor and other families of people shot by police in recent years. The family of Tommy Le, shot by a King County Sheriff's deputy in June, has not been present at press events. Still, after officers mistook a pen in his hand for a knife and shot Le, his story has also been cited as another recent example of police shootings.

Speaking Thursday, friends and family of Joseph-McDade had some specific demands of their own: release all video and names of the officers; provide more information about officer patrol car maneuvers, which they believe are excessively dangerous; provide more cultural competency training to officers; turn over the police investigation to the King County Sheriff’s Office; release the names of the officers; and equip officer cars with cameras. They also want authorities to allow for an independent, community-led investigation.

The Lyles family has turned to Andre Taylor and Not This Time for help because, Katrina Johnson said, "We don't know what we're doing." Speaking for the NAACP, Kenny Pleasant said this is why it's important for these disparate deaths to come together and why his organization is offering its support. When it comes to losing a family member in a police shooting, said Saima Joseph, “There’s no manual.”