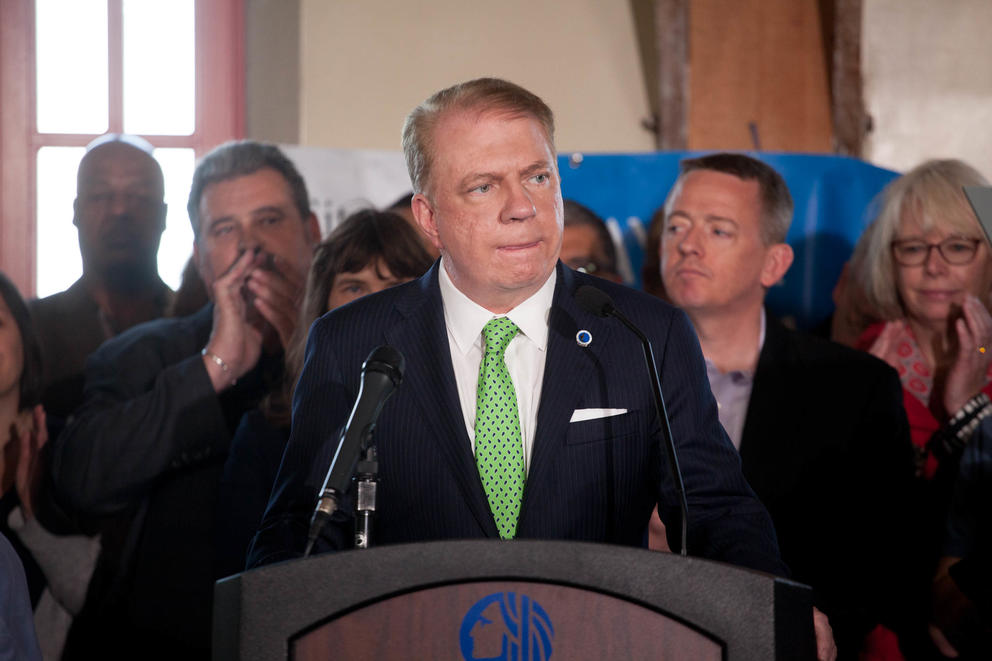 Seattle Mayor Ed Murray announcing last May that he would not be seeking re-election.

It happened again at City Hall on Friday: a cancellation of a press conference touting an administrative milestone. Mayor Ed Murray was scheduled to celebrate an achievement that came under his watch: signing off on a citywide tax on high-income earners. But the appearance was postponed with little explanation.

It was déjà vu from April when, hours before the mayor was to celebrate a police reform milestone, his staff hastily canceled a press conference. That afternoon, the Seattle Times published allegations against Murray that he’d sexually abused three teenagers in the '80s. A fourth man would come forward later.

So when the income tax signing was canceled, the hallways of City Hall couldn’t help but speculate. Murray was reportedly spied on the second floor late last week, speaking with councilmembers. Rumor of some bombshell public records release started to spread. About what, however, was unclear. Murray’s communications director, Benton Strong, said the move to delay the income tax signing was “just scheduling.”

But Sunday, splayed above the fold on Page One in the Times, came the news report, based on newly disclosed records: a previously unreleased 1984 report from Oregon Child Protective Services concluded Murray sexually abused his Portland foster son, Jeff Simpson, in the early 1980s. “In the professional judgement of this caseworker who has interviewed numerous children of all ages and of all levels of emotional disturbance regarding sexual abuse, Jeff Simpson has been sexually abused by … Edward Murray,” CPS caseworker Judy Butler wrote in the documents obtained by the Times.

As a result, Oregon state officials concluded that “under no circumstances should Mr. Murray be certified” as a foster parent.

Murray has repeatedly denied Simpson’s allegations, saying he never abused Simpson and that no charges have ever been filed. The District Attorney in Oregon decided decades ago to not pursue an indictment, which Murray has claimed invalidated the accusations.

But as the Times' story points out, authorities may have had other reasons for not filing charges. According to the Times, Deputy District Attorney for Multnomah County Mary Tomlinson wrote in the documents, “We could not be sure of meeting the high burden of proof in a criminal case — of proof beyond a reasonable doubt and to a moral certainty. However, this in no way means that the District Attorney’s Office has decided Jeff’s allegations are not true.”

In a letter to the Times, Murray's lawyer in Portland, Katherine Heekin wrote, “Oregon’s Child Protective Services is supposed to err on the side of believing a child’s accusations. The agency is not responsible for judging sex abuse cases. It merely investigates allegations of sex abuse. In contrast, law enforcement is responsible for determining whether or not a crime may have happened. Here, there was no indictment, no charges filed, no conviction, and no crime.”

In a statement issued on Sunday Murray said:  “I have said from the beginning that I never harmed or had an inappropriate relationship with Jeff Simpson. That remains just as true today as when I first said it. I have never engaged in sexual activity with Jeff Simpson or with any other minor."

It continued, "The Child Protective Services documents the Times based its story on obviously do not tell the full story. Consistent with the findings of the District Attorney that the accusations could not be proven, there is a record with numerous accounts from others who found considerable credibility issues with Jeff and his claims.

“Jeff’s case worker at CPS never interviewed me or shared her findings with me or my attorney. That she believed Jeff's claims at the time and advocated on his behalf is painful to see, but does not change the fact that, based on the totality of the evidence that was collected, the District Attorney declined to file charges."

The CPS files, according to the Times, were previously thought destroyed. When it was discovered they were not, government officials released limited and redacted records.

Ironically, according to the Times, it was Murray’s own urging to reporters to seek out more records about the accusations that led to CPS releasing the documents.

Now, there's another wave of speculation with yet another wave of media reports about the mayor and sexual abuse: Will this be what causes Murray to resign? Will Murray's friends and allies continue to come to his defense? Will this have any impact on the Delvonn Heckard lawsuit that was withdrawn last month?

In April, Heckard alleged Murray had paid him for sex and taken advantage of him when he was a teenager. His lawyers withdrew the lawsuit last month, saying that Heckard needed to finish rehabilitation and counseling to proceed. The sex abuse scandal nonetheless forced Murray to drop his re-election bid for a second mayoral term. But the withdrawal of the lawsuit was celebrated by Murray as vindication.

On Sunday, when asked if Murray would now consider resigning, Murray’s spokesperson Jeff Reading did not respond to the question and only provided the mayor’s statement.

Council President Bruce Harrell did not immediately respond to an email for comment. Harrell once again becomes a key figure in the Murray drama because if Murray resigns, the seventh-floor mayor’s office would be his to accept. He would have five days to decide.

The city charter also allows the council to remove a mayor for neglect of duty or "an offense involving moral turpitude," defined as "depravity" or "wickedness," although there was no immediate indication that was forthcoming.

On Sunday, Councilmembers Lorena Gonzalez and Tim Burgess also did not immediately respond to comment. Heckard’s lawyer Lincoln Beauregard said he had, “No comment for now. Maybe later.”

The R word came up frequently after the first accusations — from high-profile voices running for office such as Mike McGinn and Jon Grant; from members of the LGTBQ community including Gender Justice League head Danni Askini and even, reportedly, from some of Murray's own advisors in the days following the initial accusations.

On Sunday, McGinn used social media to reiterate his call for Murray to step down. Mayoral candidate Jessyn Farrell also called on Murray to resign. In a statement tweeted by a Times reporter, Farrell said the new information "severely undermines our confidence in his ability to carry out the duties of his office."

Since the withdrawal of Heckard's suit, Murray's tenure had returned to relative normalcy. He pledged to have a furious and productive finish to his term as mayor, which ends Dec. 31  Although he declined to launch a write-in campaign for mayor, polling showed it was not an outlandish idea. And candidate for mayor Jenny Durkan happily accepted his endorsement; according to Murray, several other candidates had reached out as well. On Sunday, Durkan did not immediately respond to a request for comment.

But now Murray’s claims that Simpson’s allegations were debunked have been called into question. As it turns out, they were simply not pursued.

Simpson, 49, received counseling from Murray in Portland in the 1970s. He lived with Murray for over a year and claims the abuse began in the 80s, when he was 13.

Simpson initially threatened to sue in 2008 and brought his accusations to the media. But while his lawyer told the Stranger newspaper he believed his client, he said the statute of limitations on the case prevented him from doing so. Media outlets did not report on the story.

Heckard's lawsuit, however, spurred the Times to revisit the allegations from Simpson and Anderson.

Murray’s statement Sunday shows he will not back off his insistence that he is innocent. He was being practical, he said, when he chose not to continue his re-election campaign: Polling showed he could not win and by stepping down, the mayor's race could keep focused on the real issues facing Seattle.

Now Murray is again balancing the practical with the political: Can city business operate as normal if the shadow of scandal continues to follow the mayor?

This story has been updated since it first appeared to reflect changing developments.