Lawmakers in Olympia passed a half-dozen new laws and millions in funding. 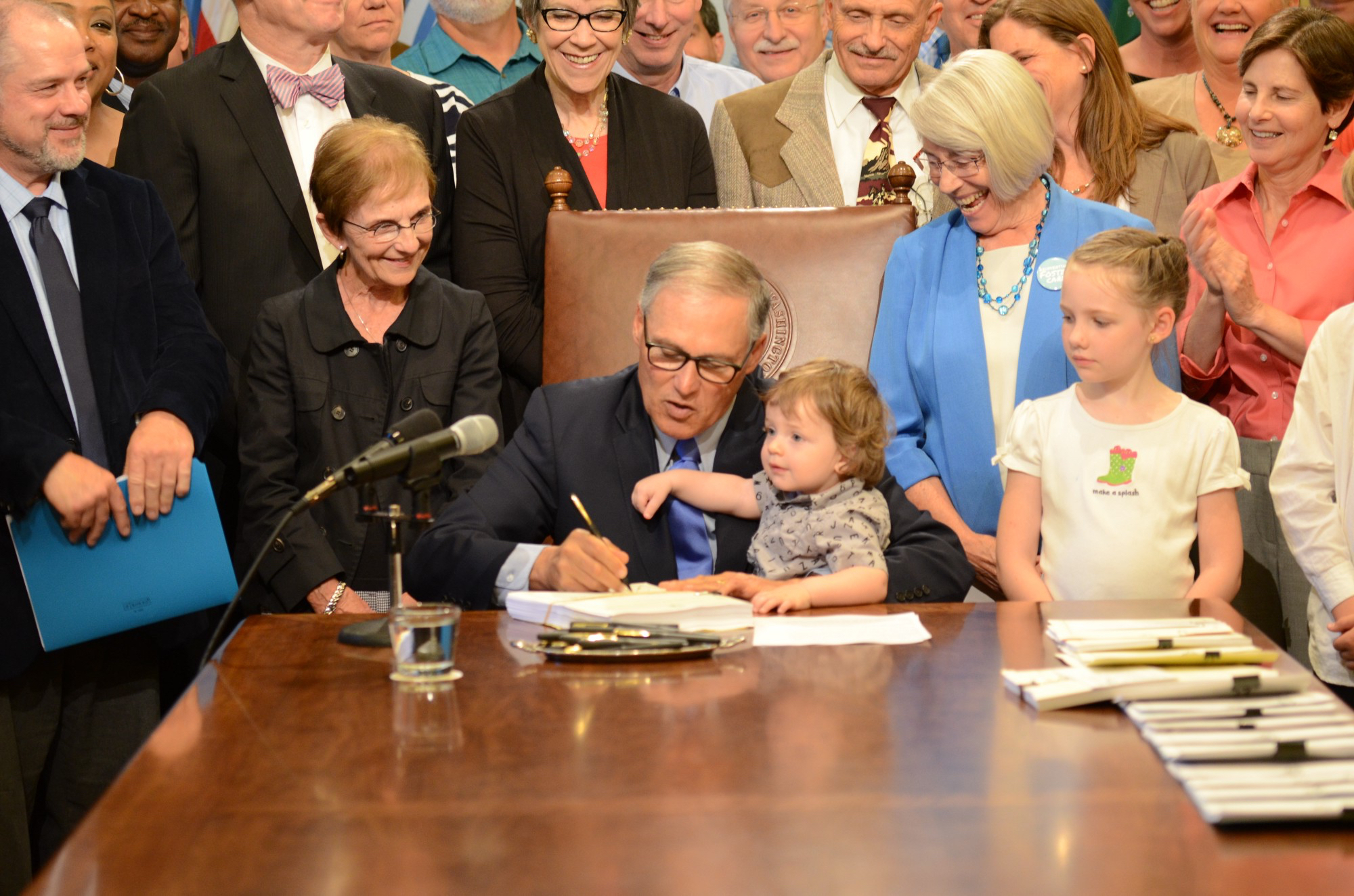 Children and families caught in the state’s beleaguered child welfare system have significant good news to celebrate this week as the state, with millions of extra dollars just appropriated by legislators, launches a major restructuring of the system.

The most far-reaching of these bills, HB 1661, consolidates child protection, early learning and juvenile justice programs under a new Department of Children, Youth and Families. The new, more prevention-focused agency aims to help families before children are removed due to neglect or abuse, and before youth get into trouble with the law. The bill passed with broad bipartisan support on June 30 as the Legislature wound down most of its major work.

"It was a great session for kids and families,” said Rep. Ruth Kagi, a Seattle Democrat who chairs the House Early Learning and Human Services Committee and was a prime sponsor of HB 1661. When she and child welfare advocates went to Olympia in January, they had expected that the debate over school funding would drown out other priorities.

"I was just so pleased when it all came together, and very pleasantly surprised,” Kagi said, “because I thought they were going to have to take deep, deep cuts in human services, and they didn't.”

The state’s foster care system, currently run by the Children’s Administration, faces a crisis-level shortage of foster homes, as shown by a series of reports by InvestigateWest in partnership with Crosscut and KCTS 9. Kagi, the legislator who has campaigned most extensively to help foster children over the last decade, credited that reporting as critical to the success of her cause this year.

Observers say the crisis in foster care is driven largely by the Legislature’s chronic under-funding of the Children’s Administration, which has long been a part of the state’s giant Department of Social and Health Services. Stagnant salaries, cuts to services for the most troubled foster children and reduced supports for struggling foster parents have contributed to an exodus of foster parents and case workers.

Now it will be the job of the new secretary of the Department of Children, Youth and Families, Ross Hunter, to fix the state’s ailing child welfare system. Gov. Jay Inslee appointed Hunter, who until now led the Department of Early learning, at last Thursday’s bill signing.

One of Hunter’s first tasks is to plan for integrating his old department with the Children’s Administration and the Juvenile Rehabilitation Administration, both now inside the Department of Social and Health Services, starting next July.

Lawmakers sought to build greater accountability into the new department’s design. An Office of Innovation, Alignment and Accountability will make research-based recommendations, evaluate services and monitor reforms, among other functions.

The office also must recommend ways to improve the system for addressing foster parent complaints. Foster parents say they now feel ignored and their complaints are often met with hostility from agency workers.

The law lays out a number of specific measures the department must track, including reducing children’s length of stay in foster care, improving consultation with foster parents and increasing both the stability of foster placements and the number of children who return to their birth families. The department must make data on these metrics publicly available by the end of 2018.

But don’t expect to see changes overnight, advocates say. “This is a 10- to 15-year fix,” said Mike Canfield, a longtime foster parent and the executive director of the Foster Parents Association of Washington. “It’s like launching a ship in the right direction, and what we have to avoid is people falling into complacency.”

Foster parents also have reason to cheer a bill that came out of the Senate. SB 5890 will provide short-term, in-home help to foster parents who need a break for a few hours. One of foster parents’ biggest complaints is that they feel unsupported, especially in recent years as social workers’ caseloads have swelled and the state eliminated other staff whose sole job was helping foster parents.

To boost the number of foster homes, the far-ranging SB 5890 requires the state to create an expedited relicensing process for foster parents who allowed their licenses to expire in the past five years. Until now, former foster parents had to start the whole process over again and repeat lengthy trainings, which could take up to a year. The expedited process is supposed to take only four months.

The bill’s other provisions include creating a panel that will review the cases of foster children who have not found permanent homes within 18 months, and encouraging adoption of teenagers by upping the support payments that adoptive parents can get from the state. And all family members who provide foster care to children related to them will now be eligible to receive cash assistance for care, removing a barrier for many older caregivers with fixed incomes.

“These are all little efforts to plug holes in the system,” said Canfield, the Foster Parents Association executive.

Should foster kids have attorneys?

One last-minute addition to SB 5890, championed by Rep. Noel Frame, a Seattle Democrat, will assign a lawyer to children in Grant and Lewis counties at least by the time they have their first court hearing after being removed from their homes. Children’s access to attorneys varies across the state and is not guaranteed until a judge has already taken away parents’ rights to get their kids back.

Right now, Frame said, "the state has an attorney, and their parents have an attorney ... but the kids don’t have attorneys, and it's their life that's at stake."

Frame, who has fostered two teenage relatives, sponsored a bill early in the session to give all foster children in the state a lawyer before their first hearing, but the hefty price tag doomed that effort this year. She hopes that this demonstration pilot will show, as other states have found, that children with lawyers find permanent homes faster, and that it could even save the state money.

Kagi said the state has changed laws to better support parents in recent years, but “there’s nothing increasing the ability of children to be at the table about their own futures.” Giving children legal representation was “one of the more important things that we did in the bill in the end,” she said.

The Republican-controlled Senate initially passed a budget that would have further trimmed the Children’s Administration budget, and it did not include money for the new department, more social workers or a substantial boost to worker salaries.

But in the end, lawmakers approved a net $14 million increase for a number of foster care and adoption programs, and another $28 million to increase social worker salaries. They also appropriated $6.3 million for the rollout of the Department of Children, Youth and Families. Those amounts don’t represent a huge bump in the Children’s Administration’s two-year, $1.2 billion budget, but advocates are happy to have won some targeted new funding. “It’s really a lot of investments in trying to improve outcomes for kids,” Kagi said.

The state will use the added funds to hire more workers in order to speed foster-home licensing and to lower caseloads — which can exceed 25 per worker. The budget also funds 24 short-term, emergency beds in facilities to reduce the department’s use of hotels to cope with the foster home shortage. The state has temporarily housed hundreds of kids, some as young as 2 years old, in hotels in recent years.

Social workers, who often leave the Children’s Administration after a year or less for better paying jobs elsewhere, will get the full 16 percent pay raise agreed to in their collective bargaining agreement. High caseworker turnover has made it harder to keep foster parents, who say overstretched workers can’t provide the support families need to be successful.

Kagi and others are hopeful that the budget picture for children and families will continue to improve under the Department of Children, Youth and Families, whose cabinet-level secretary will now be “coming to the Legislature and making the case for what resources they need — and be held accountable when things aren’t going well,” Kagi said.

This story was supported by grants from the Fund for Investigative Journalism, the Satterberg Foundation and the Thomas V. Giddens Jr. Foundation.

InvestigateWest is a Seattle-based journalism studio focused on the environment, public health and government accountability. To receive alerts about future stories, go to www.invw.org/newletters.