Fishers are back -- with a baby! 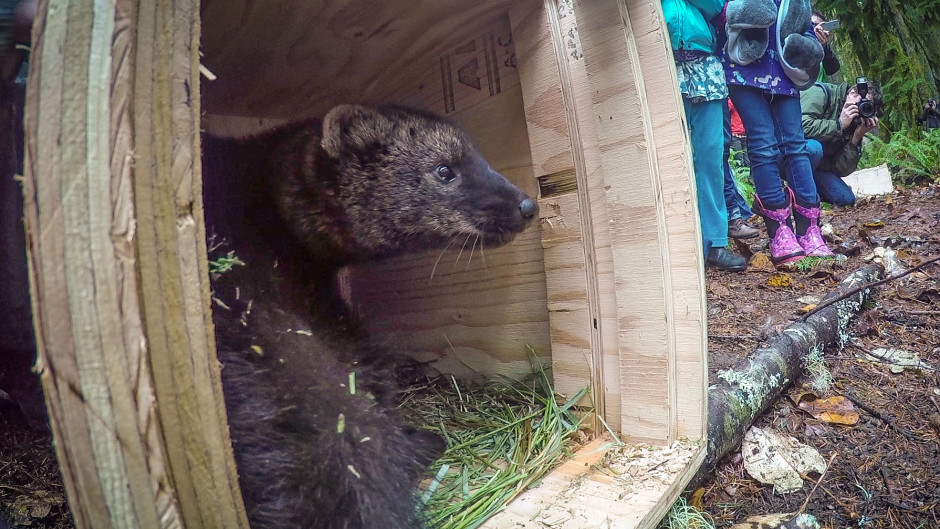 The fisher is a weasel-like predator that is native to the Pacific Northwest. This fisher was brought to Washington's Gifford Pinchot National Forest from British Columbia. It was released into the wild on Dec. 3, 2015.

This story originally appeared on EarthFix/OPB.

A grainy trail camera photo shows a female fisher in the Gifford Pinchot National Forest coming down a tree headfirst carrying a baby.

It’s the first evidence that these furry, weasel-like forest carnivores are reproducing in Washington’s South Cascades, where they were reintroduced less than two years ago.

“She is hopefully the first of many female fishers we photograph attending a den site and caring for kits in the South Cascades,” said Jeff Lewis, a wildlife biologist with the Washington Department of Fish and Wildlife.

The young female fisher was reintroduced into the area in February 2016, as part of an effort that placed a total of 69 fishers into the South Cascades.

She’s still only two years old, the youngest a fisher can be to give birth to kits, said Lewis.

“Reproductive success of a female this young and this new to the South Cascades is a positive sign that the reintroduction area can support a self-sustaining fisher population,” said Tara Chestnut, an ecologist with Mount Rainier National Park.

It’s a big milestone for the reintroduction effort, said Chase Gunnell of Conservation Northwest, which has been with WDFW and the National Park Service to bring fishers back to Washington.

The housecat-sized member of the weasel family was wiped out through over-trapping and habitat loss. They have been listed as a state-endangered species since 1998.

Gunnel said biologists decided to put up trail cameras in the area around where a tracking transponder embedded in the female fisher showed “a cluster of activity.”

“One of those cameras was able to document what looks like a young female fisher moving a kit from one den site to another,” he said. “We’re thrilled.”

Officials report 77 percent of the fishers released into the South Cascades survived their first year and 64 percent of females established a home range.

A similar effort in Olympic National Park in 2008-10 released 90 fishers that are now distributed throughout the Olympic Peninsula and are reproducing.

Fisher releases in the North Cascades will begin this fall.