Inslee uses veto power and GOP isn't having it 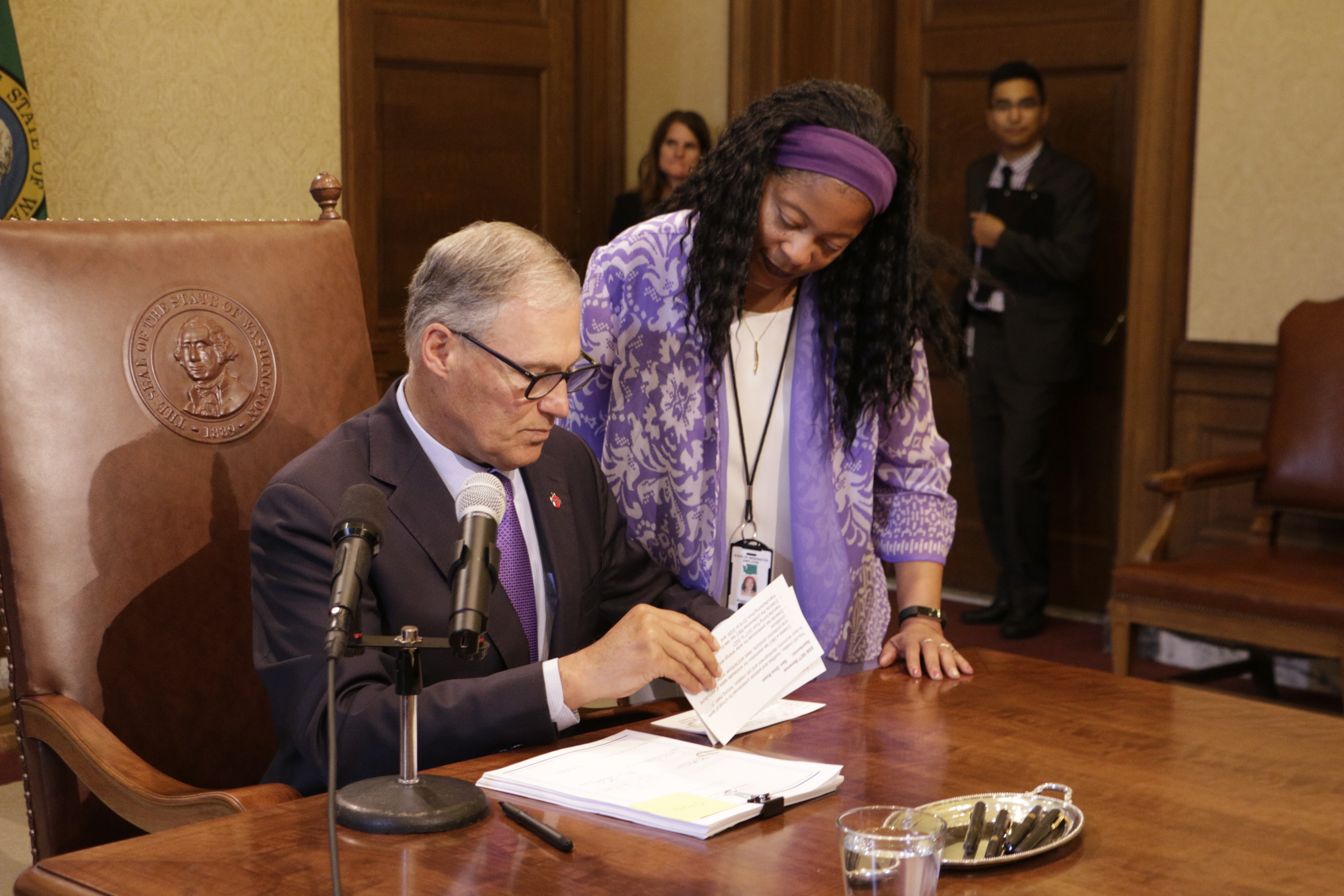 Gov. Jay Inslee, seated, reads veto messages while legislative assistant Angie Adams looks on, Friday, July 7, 2017 in Olympia, Wash. Inslee vetoed a plan to give manufacturers in the state the same tax cut that the Legislature previously gave to Boeing.

Gov. Jay Inslee vetoed a business tax break Friday, prompting a GOP threat that it will try to override that veto or retaliate by withholding state money from construction projects.

Inslee vetoed a business-and-occupation tax cut that was part of a bill containing several new tax breaks agreed upon by Republican and Democratic legislators a week ago. The vetoed portion would have trimmed the B&O tax rate to the level that the Legislature granted Boeing in 2013, when the corporation threatened to move work out of the state without the extra exemption.

The reduction was part of the deal on the $43.7 billion budget for 2017-2019 deal that the Senate and House hurriedly passed June 30, hours before a partial shutdown of state government.

Inslee blamed Republican and Democratic legislators for drawing out budget negotiations — which were scheduled to be done in mid-April — to June 28, giving no one the chance to thoroughly discuss the final details of the deal with the governor’s office or the public. Many of the details of that deal, including the B&O tax cut, were not made public until June 30.

Inslee said no one from the Legislature approached him or his staff about guaranteeing that he wouldn’t veto the B&O tax cut. “No one asked for that assurance,” he said. And the GOP had known for a while that he opposed trimming the tax, Inslee said.

“It’s unbelievable that the governor would consider going back on a complex budget agreement that received strong bipartisan support,” Braun said in a press statement. “The governor’s staff was involved in every step of the negotiation and at no point prior to the bill’s passage did they suggest the governor would veto part of the agreement. Negotiating a budget is already an enormously difficult process that requires working in good faith. Vetoing part of the agreement will seriously undermine our ability to govern.”

Inslee said he vetoed the B&O tax cut because it would take money from education, mental health public safety and other state government priorities. The tax cut would eventually amount to about $85 million in lost revenue per biennium, state officials said.

“At a time when homeowners will pay more in property taxes, businesses would pay less,” Inslee said. “That’s an unfairness question that cannot be ignored. … The largest [part of the] break would go to out-of-state oil companies.”

Part of the legislative budget deal was a major overhaul of the state property tax system, increasing them in the Puget Sound area and shrinking them elsewhere.

While Inslee and the Legislature took flak for Boeing’s preferential treatment, the governor said Friday said the 2013 deal required the corporation to keep the most significant part of its 777X manufacturing work in Washington, with no 777X plants being built elsewhere. Inslee said this year’s proposed B&O tax cut had no way of tracking its effectiveness on keeping or creating jobs, no job-creation targets and no expiration date.

Braun took issue with the governor’s reasoning. He said the state has lost more than 50,000 manufacturing jobs since the start of the 2000s. “Not only are these jobs critical to rural and suburban economies, but they provide high wages for working families,” he said. “Failure to invest in the success of our state’s middle-class families would be a major disappointment and rejection of a statewide economy that works for everyone.”

Sen. Michael Baumgartner, R-Spokane and chairman of the Senate Commerce & Labor Committee, tweeted: “There will 100% NOT be a capital budget unless House overrides veto. Deal is a deal.”

The GOP is already holding hostage the state’s 2017-2019 capital budget, which covers major construction and renovation projects. Senate Republicans have said they won’t pass a capital budget until they get the deal that they want on a bill to enable resumption of rural well drilling, largely frozen since a 2016 Supreme Court ruling that said a landowner has to prove a new well won’t threaten fish by reducing nearby stream levels. So far, Republicans and Democrats are not near any compromise on this matter with the Legislature due to go home no later than July 20.

The capital budget finances construction project all throughout Washington, including building schools and other education facilities, mental health centers, roads and bridges. In Seattle, that translates to construction or major improvements for the Seattle Opera, the Burke Museum, a number of University of Washington projects, the Hugo House, a Filipino Community Center and the Seattle Aquarium.

Because construction work on schools would be slowed or stopped because of the lack of a new capital budget, Inslee said: “It is morally repugnant to hold children hostage.”

Braun said the Senate passed the overall tax breaks bill, with several new exemptions besides the B&O tax measure, by a 33-16 split and the House 83-10, He said if those margins held — potentially a big if — they would constitute the two-thirds majorities required to override the veto.