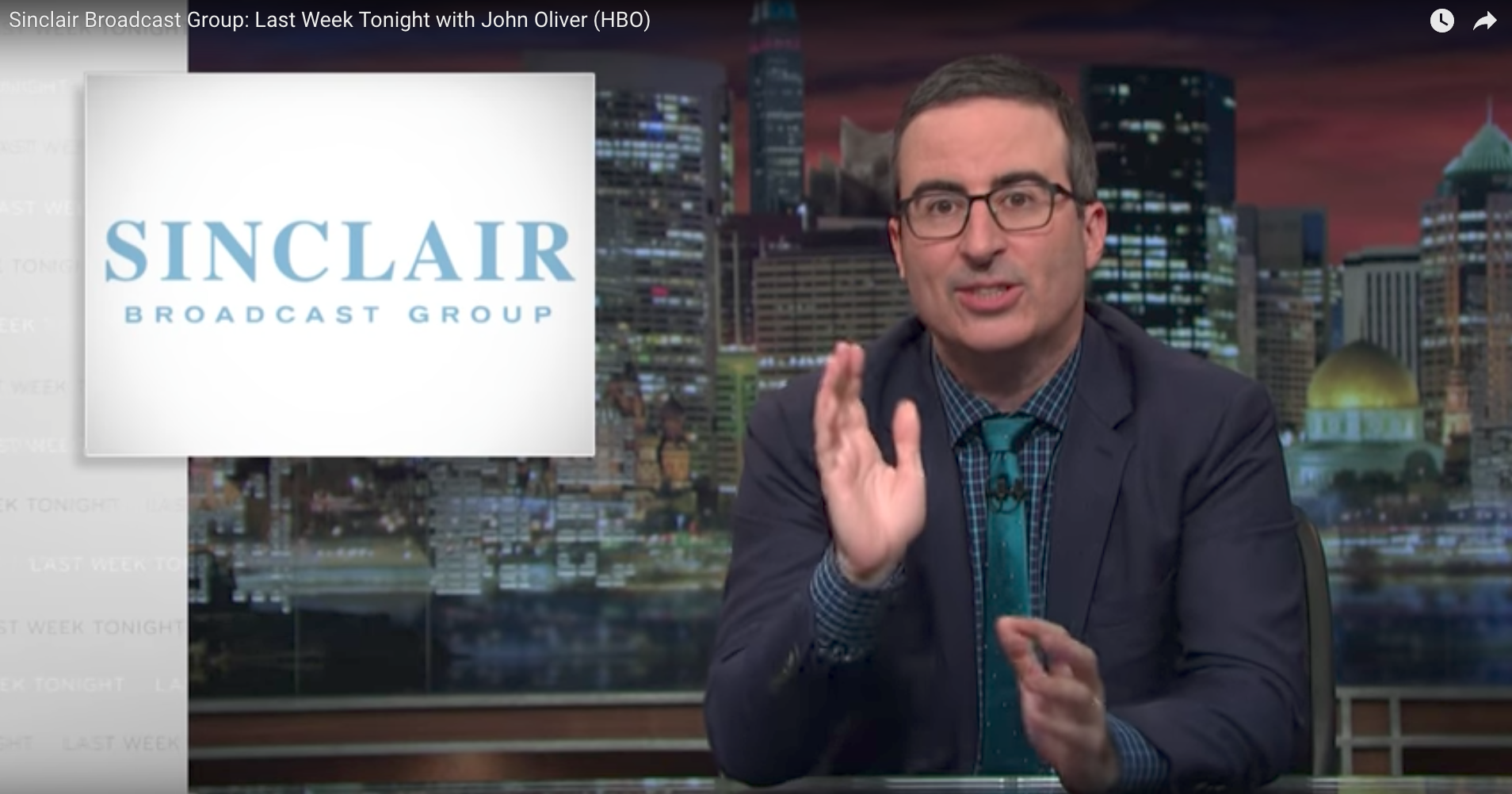 John Oliver skewers Sinclair in a July 2, 2017 episode of "This Week Tonight."

In the days after KOMO News employees complained to both The New York Times and The Washington Post about undue editorial influence from their corporate boss Sinclair, the national broadcasting giant sent the station a letter. It was a “snarky” reminder that, if contacted by outside media, employees should forward those requests through the proper channels, according to a KOMO employee who requested anonymity.

But, said this employee, “It’s just like the Trump administration.” In other words, the more Sinclair tries to rule with an iron fist, the more leaks will slip through its grip.

The story of Sinclair’s presence in local media and KOMO’s minor pushbacks was catapulted to an international audience last week through a segment from comedian John Oliver. In it, he tears into the coverage mandated by Sinclair and the conservative broadcast giant’s penchant for “must-run” segments that tend to lean heavily right. The bit went viral.

But if any of this pressure is giving leverage to the local news station, it’s not showing. In ongoing union negotiations with KOMO-TV photographers, Sinclair has essentially employed a take-it-or-leave-it attitude about the proposed work contract. And in the wake of Sinclair’s recent purchase of Tribune Media, which owns local station Q13 Fox, KOMO employees are feeling vulnerable about job security. Some — but not all — are feeling pressured to take a contract that is less than perfect to ensure it's in place if the FCC approves the merger.

The contract negotiations have arrived in the midst of increased media attention about Sinclair and KOMO. Crosscut first reported in March that Sinclair ordered affiliate stations to broadcast a segment from its Vice President of News Scott Livingston decrying “fake news” and asking viewers to watchdog local stations through a new “content concerns” button. KOMO staff worried the segment could damage their reputation.

But while the union representative for KOMO's photographers, Dave Twedell, says he thinks the public pressure is having an effect on Sinclair generally, he doesn’t see it at the bargaining table.

Ever since Sinclair pushed its stations to air a 45-minute documentary calling into question then-Democratic Presidential nominee John Kerry's service in Vietnam, the broadcast corporation has been pegged, at best, as right-leaning and, at worst, as propaganda.

That reputation was reinforced after reports that Sinclair had collaborated with Jared Kushner and the Trump administration for positive coverage during the 2016 presidential campaign. And, as John Oliver pointed out, some of the “must-run” segments, like the ones from the “Terrorism Desk,” mirror the talking points of politicians on the right.

Even before the Livingston "fake news" story, Sinclair’s management style was a concern for local news employees who regarded it as overly top-down. Shortly after Sinclair acquired KOMO in 2013, 10 KOMO employees were laid off as part of a national cutback.

Anxiety about Sinclair is now being felt at Q13 Fox, which was acquired as part of the corporation's $3.9 billion purchase of Tribune Media in May (the deal still needs FCC approval). The mood since the proposed acquisition was announced, according to one Q13 employee, “has been dour and concerned… People know what Sinclair is and how they operate. Or if they don't know it personally, they are learning quickly…. [Sinclair’s] narrow world view and poorly-produced agenda-driven drivel erode the vulnerable trust we have with our viewers.”

It's not a guarantee Sinclair's purchase of Q13 will get approved. FCC rules say two of the top four television stations in a local market may not be owned by the same company.

But if it is approved, the merger will raise more questions about what it means for an umbrella company to own one union station, KOMO, and one non-union, Q13.

It’s been three years since Sinclair bought KOMO from its previous owners, Fisher, and the station’s photographer’s union has yet to sign a contract. Sinclair is reportedly offering KOMO photographers a take-it-or-leave-it 1.5 percent pay bump, which one employee scoffed at. “Both KIRO and KING just signed for two percent,” the employee said.

In addition, Sinclair wants to change KOMO's policies on vacation time and premium and overtime pay. “Sinclair just wants to erase everything that our union has fought for,” said one employee.

But, according to Twedell, the purchase of Q13 has changed the entire dynamic. Suddenly, the biggest concern for every photographer is what the merger with a non-union channel means for their jobs.

Interview requests made to Sinclair's corporate office in Baltimore were not returned.

Q13 and KOMO each have their own brand: Q13 is perhaps a little more slick and scrappy; KOMO is the legacy station with a larger newsroom, tied to a more widely palatable national affiliate to Seattle liberals in ABC.

What, exactly, it means for the two stations to become siblings is unclear. But some worry that Sinclair could pool photographers from the two stations, drawing footage and content from one source for each station. If there's a shooting, will both stations send its teams? How would the unionized employees at KOMO interact with the non-union employees at Q13?

Twedell's unsure. He’s fairly confident Sinclair would not be able to lay off all the KOMO photographers in favor of the Q13 employees just to bust the union. But, he says, it’s possible they could achieve the same objective more subtly by pooling the two stations’ photographers and then cutting jobs from that pool.

Twedell hopes to negotiate a proposal to prevent any layoffs from occurring as a result of the merger. In the meantime, however, some employees feel the proposed merger has changed the calculus around what they should accept. “Our backs are against the wall,” said another KOMO employee, who also requested anonymity. It’s a “gamble,” this person said: Sign the contract and move on or risk the repercussions of going forward without an agreement with Sinclair.

Among the employees Crosscut spoke to, it's a split between the two. What they did agree on: The John Oliver piece was great.