Black, female and making theater. And she's damn good at it 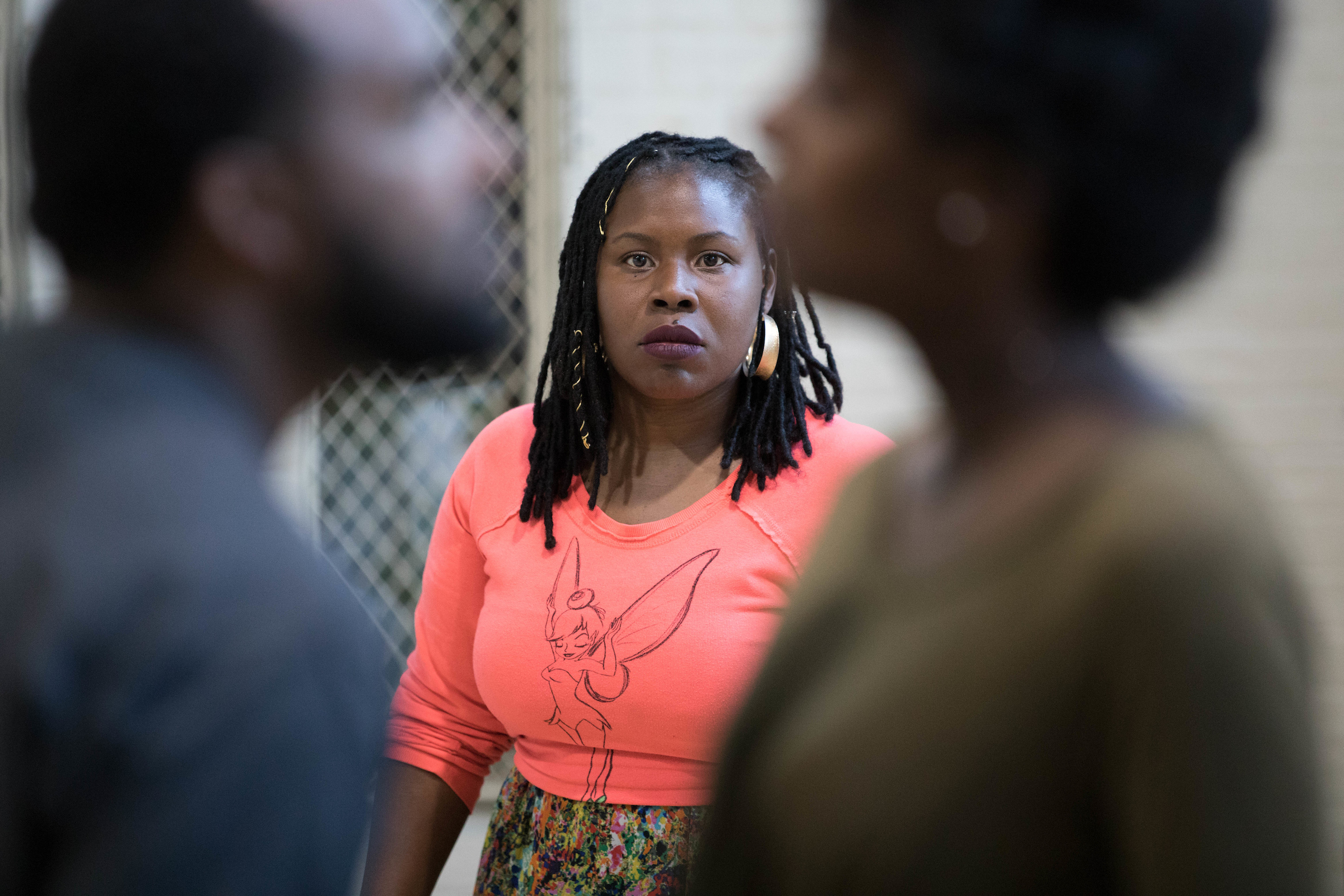 A college campus building. A late summer evening so a soft light fills the space: a rehearsal studio. There’s a bed, bookcase, a bench. A charismatic Black woman holds court at the front of the room.

What does the act of imagination look like? Malika Oyetimein — blue toenails, bright pink Tinkerbell T-shirt, a few dreadlocks adorned with gold ribbon — sitting on the edge of a table, leaning forward to take in actors rehearsing a scene. She takes a quick sip of a Starbucks iced tea before working the sidelines, NBA-coach style, one corner to the next, scrutinizing the action on the makeshift stage.

In a strong voice, she instructs actor Eva Abram. “It’s the desperation of you not wanting him to hurt you or the baby,” Oyetimein tells her. The scene is devastating: Abram plays an old woman named Candylady, her arms rocking an imaginary infant as she recounts one of the worst nights of her life. Rehearsing the scene again, Abram’s quivering is a lot more palpable.

She coaches actor André Brown, who plays a frustrated blues man in the midst of yelling at his girlfriend, when the sudden appearance of her brother triggers an even deeper fury. “It makes you seethe,” she says. “His presence is like he’s turning a knife in you.” His moves emerge more explosive, his lines even nastier.

The Philadelphia-raised Oyetimein, 34, started out as an actor. She was a kid “always singing and performing.” Then after being cast as a maid three years in a row in her high school productions, “I was forced to become a director.” In her senior year, Oyetimein directed one-act plays with her best friend.

“It was a passion I had never had,” she recalls.

That passion is now undisputed talent, talent that has anointed Oyetimein as someone to watch.

“She’s having a bit of a moment,” attests Valerie Curtis-Newton, the theater director and UW Drama educator. “She’s in the right place at a time when the place is interested in diverse representation.”

Adds Intiman Theatre’s Andrew Russell: “She is what Seattle needs more of — women P-O-C — having a role in deciding what work needs to be made.”

While still a graduate student at the UW’s School of Drama, Oyetimein directed “Bootycandy” for Intiman and “Milk Like Sugar” for ArtsWest. Both productions generated accolades for Oyetimein and there were more shows and positive reviews to come.

In April, she flew back to Philly to direct the world premiere of “White,” which opened at Theatre Horizon.  Then she directed “Barbecue” for Intiman, which opened in May. She squeezed in finishing up her MFA in directing in June. Now earlier this month, here she was — back at the drama school housed at UW’s Hutchinson Hall, rehearsing “Hoodoo Love” for Sound Theatre Company and Curtis-Newton’s Hansberry Project.

“Ten plays in the last year,” Oyetimein says, smiling, all-too-aware of her membership in the exclusive club that is African-American female theatermakers.

“I have drive, passion, ambition. A big reason I went to school is to have a national profile. I want the stories I tell to reach bigger audiences,” she says.

The story is harrowing; an act of violence ends the first scene. But it’s tender in parts and, triumphant.

Exuberant in personality as she is in style — the gold in her hair is a nod to her Nigerian father; her mother is American — Oyetimein greets her actors with “Hey, baby.”

“I’m a mama. I think I take care of them,” she says about her actors. “I love on them and I push on them hard,” she adds, referring to her directing style.

She credits studying communications as an undergrad at William Paterson for grooming her eye for detail: “I pick up on body language. I know when someone holds back.” The UW, she says, honed her theatrical skills: “How to find the right words. I take my time to give notes.”

“She can walk up to an actor and see what they’re struggling with. She has a no B-S attitude, but you know she’s on your side,” says Curtis-Newton, who taught Oyetimein at UW and who tapped her to helm “Hoodoo Love.”

At an opening performance at Seattle Center’s Center Theatre last week, the director watched from a seat in the middle of the second row, mouthing the lines, laughing some, leaning forward fully rapt.

“Nailed it!” she beamed afterward. And then saying, “I’m going to go hug them,” she hurried off to find the cast.