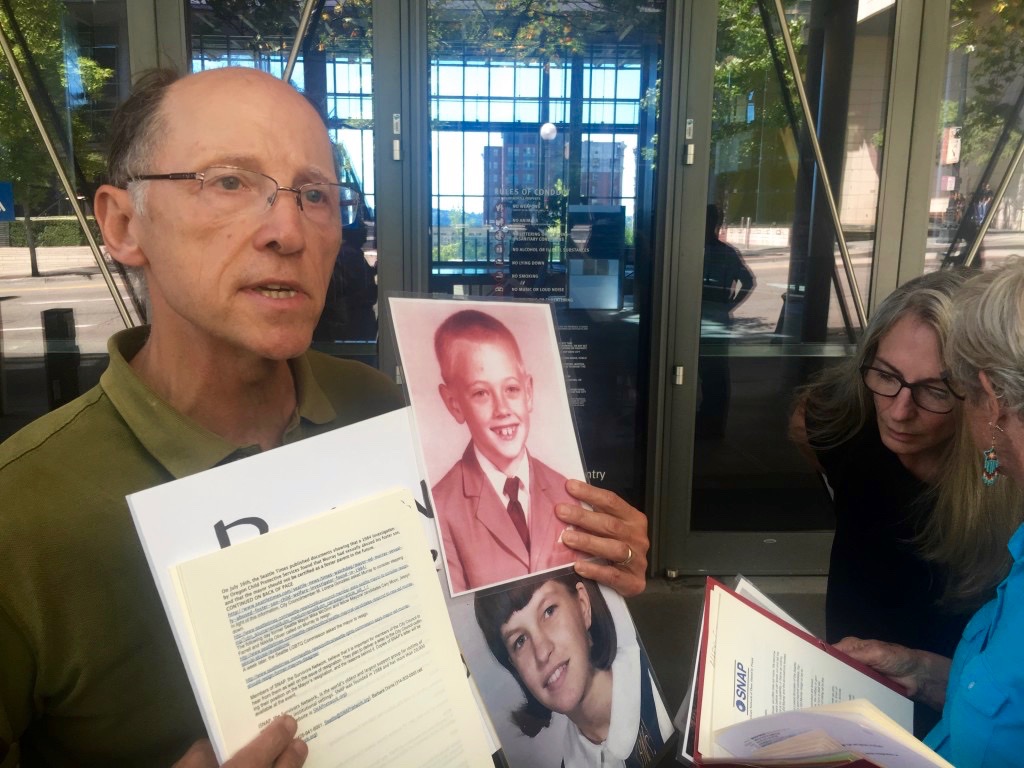 At Seattle City Hall, therapist Robert Fontana joined the local chapter of SNAP calling for the resignation of Ed Murray as Seattle mayor.

When powerful people are “credibly accused,” said Robert Fontana, a supporter of SNAP and a local therapist, “there needs to be consequences.”

The local chapter delivered a letter from the national organization to the Seattle City Council on Monday. “When serious accusations and allegations of sexual misconduct are levied against a significant leader in the community, our churches, the military or government, a zero tolerance policy is critical,” the letter reads. “Leaders must not turn a deaf ear. When they do, they are guilty of misusing their power instead of rising up to the challenges of their own position in such systems.”

According to Mary Dispenza, a leader with the local SNAP chapter, the statement is supported by the national organization, which has a membership of more than 20,000 people.

While SNAP speaks out on behalf of Catholic sexual abuse survivors, it has increasingly expanded its outreach. Its work now includes partnering with secular organizations and tackling legislation that discourages sexual abuse survivors from going to authorities, such as statutes of limitation laws.

Also on Monday, City Councilmember Kshama Sawant became the second councilmember to call on Murray to resign. In an op-ed published in The Stranger, Sawant writes: “If Mayor Murray refuses to step aside on his own, the responsibility passes on to the City Council to remove him. This is a political decision, not a legal one. Impeaching the mayor is not a statement of his guilt or innocence, but rather a decision to put the burning needs of our city above the political interests and career of one person.”

Among those who have previously called on Murray to step down are Councilmember Lorena González, several mayoral candidates, the Seattle LGBTQ commission, and others.

Murray was sued last April by a man, Delvonn Heckard, who claimed the mayor had paid him for sex and sexually abused him as a teenager. Two other men, Jeff Simpson and Lloyd Anderson, had attempted to come forward with similar accusations in 2008, but because of the statute of limitations, his case never went to court. Subsequently, local media never publicized the accusations, although Simpson had reached out to several news organizations at the time. A fourth man and friend of Heckard's, Maurice Lavon Jones, brought similar allegations last May, but has not filed a separate court case.

Heckard withdrew his lawsuit last June, citing personal reasons, but pledged to re-file the case next year. He also recently sued the city for defamation, accusing Murray of painting him in a poor light.

Despite The Times' most recent bombshell that gave more credence to his accusers' allegations, Murray so far has shown no intention of leaving office before his term ends on Dec. 31. The City Council could call a hearing and impeach him if they wished, but the numbers don't add up: removing Murray would require the support of six of the nine councilmembers. So far, four have already said they don't support impeachment proceedings.