Calls for mayor to step down; Murray: 'I am not going to resign' 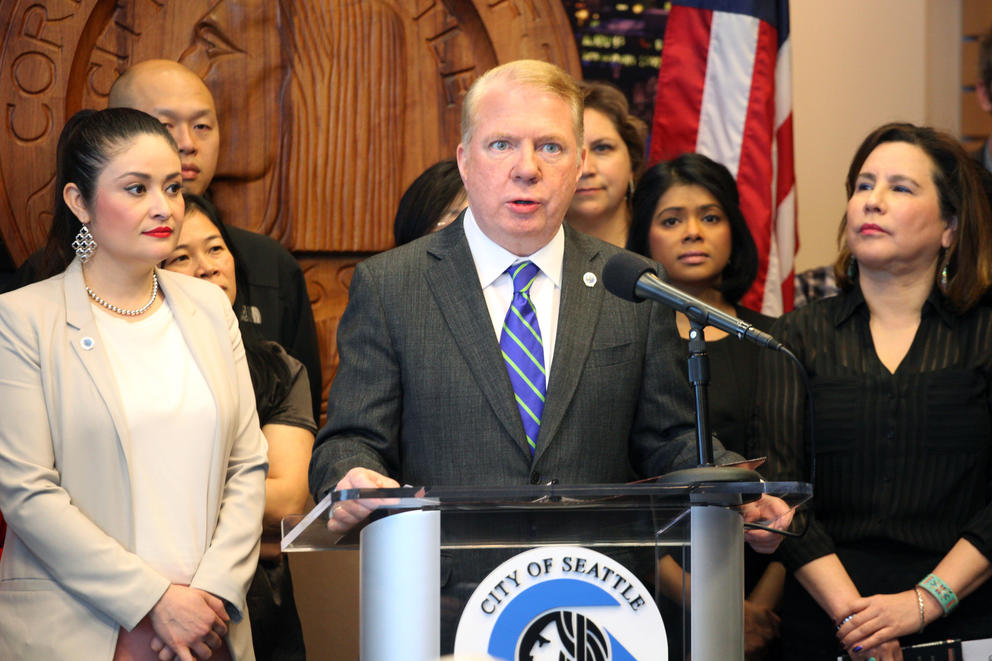 Councilmember Lorena González (left) with Seattle Mayor Ed Murray in March 2017. She is calling for Murray to "consider stepping down" as mayor.

Despite calls to resign, including from his former legal counsel and sitting councilmember Lorena González, Mayor Ed Murray vowed Monday afternoon to finish out his term as mayor.

"I know that today a member of the Council has issued a statement calling on me to resign, and warning of action against me if I do not," he said in a statement. "I continue to believe such a course of action would not be in the city’s best interest. That is why I am not going to resign, and intend to complete the few remaining months of my term as mayor."

Councilmember González said Monday morning Murray should “consider stepping down from mayor” following a Sunday Seattle Times report containing more information surrounding his alleged sexual abuse. The article raised questions about what happened between the mayor and his foster child Jeff Simpson in the 1980s. If he continues to serve, González is asking the City Council no later than July 24 to convene a committee to determine if a transition is merited to govern the city.

“A collaborative approach is my preferred approach but the leadership of this City, including the Mayor, must proceed in a manner that will balance the ongoing need to effectively govern while acknowledging the grave harm caused by proceeding with a status-quo mentality,” she said in a statement issued Monday morning. “This situation is unprecedented in our city’s history. We cannot pretend otherwise.”

“These documents daylight additional facts and a related administrative conclusion that the alleged sexual abuse did occur,” González said. “As a dogged advocate for sexual abuse survivors, I take these administrative findings very seriously, and they raise grave concerns.” Murray continues to deny all of the allegations against him, and said the Seattle Times "cherry picked records" in their story.

González, however, does not appear to have the six of nine councilmembers she'd need to remove the mayor if he continues to resist stepping down. In a statement Monday afternoon, councilmembers Bruce Harrell, Debora Juarez, Lisa Herbold and Sally Bagshaw said, "Despite serious allegations that Mayor Ed Murray committed acts of misconduct, there have been no judicial findings or conclusions that he committed an offense or willfully violated any laws. The Mayor is entitled to due process and legal counsel."

Candidates for mayor on the trail were more aggressive.

Mayoral candidate Jenny Durkan, who was endorsed by Murray in June, released a statement Monday morning saying she spoke with him Sunday night.

"While I believe Ed Murray has been a good mayor, I encouraged him to reflect deeply about whether he could continue to lead and what is in the best interests of the city," the statement read.

Other candidates began calls for resignation Sunday night. Mike McGinn tweeted that "the time for denials and victim blaming is over. The city deserves full attention to its pressing issues." Jessyn Farrell followed, telling the Seattle Times that "the latest revelations from the Oregon Child Protective Services report shed new light on Mayor Murray and his past. The Mayor should resign, as this information severely undermines our confidence in his ability to carry out the duties of his office."

Cary Moon pointed to her statement back in May which called on Murray to resign when the allegations first came to light.  "I believe it's in the best interests of everyone - especially the many survivors of sexual assault re-experiencing their own traumas- for the Mayor to step down now so that City Hall can get back to work," she wrote.

Nikkita Oliver joined in Monday afternoon, saying Murray should "of course" step down. "At this point, if he doesn’t hold himself to account, the burden falls on other elected officials and the city council," she said in a statement.

In a council briefing Monday morning at City Hall, González expanded on her statement. She released it, she said, after reading through the documents released by the Times and speaking with the Mayor. "It brings me no joy and, in fact, brings me a lot of sadness that we have to be having this conversation to begin with," she said.

But the new information over the weekend "Necessitated my feeling that I needed to send out strong statement."

Other councilmembers were more cautious. "It was my hope that we could spend more time off of television cameras" before having the discussion, said Councilmember Sally Bagshaw. "These are very serious charges, no question about that.... As a former prosecuting attorney like Councilmember González, we know that facts matter."

She concluded, "At this point I would just like to give the mayor some space to work through this and for us to acknowledge our responsibility to the city."

If Murray resigns, Council President Bruce Harrell would have five days to decide if he would want to accept the position as mayor. The city charter also allows the council to remove a mayor for neglect of duty or “an offense involving moral turpitude,” defined as “depravity” or “wickedness.”

The charter language, adopted by voters in 1977, reads: "The Mayor may be removed from office after a hearing, for any willful violation of duty, or for the commission of an offense involving moral turpitude, upon written notice from the City Council at least five days before the hearing. He or she shall have the right to be present, to the aid of counsel, to offer evidence and to be heard in his or her own behalf. Upon the affirmative vote of two-thirds of all the members of the City Council, acting as a court of impeachment, the office shall become vacant."

Harrell, however, isn't calling for Murray to step down.

"I’m not asking him to step down," Harrell told reporters following the briefing. "I don’t have to justify that for anyone. I make my decisions on what’s in the best interest in the city right now. The question is, is he doing his job? I haven’t heard any of you say he’s not doing his job every single day. That governs whether he should step down or not. Now, if I see some indication he’s abdicated his responsibility and the people of Seattle are suffering because of that, then we’ll have a conversation. I’m not afraid to ask anyone to step down."

He added that Seattle residents, "did not ask us to judge anyone for something that happened 33 years ago or maybe didn’t happen. We just don’t know. And I would ask that I don’t want to be judged for anything 33 years ago.... And I would challenge each of you to think about where you were 33 years ago. The question is are you doing your job today right now?"

Murray believes he is: "My administration and I continue to govern the city effectively, and I am proud that we continue to deliver results that will improve the lives of the people of Seattle," he said, promising that "we have many more important announcements coming over the next few months."

Councilmember Tim Burgess said the decision to resign ultimately falls to the mayor. "Decisions that the mayor makes about his future are at this point his to make," he said. "The process that’s outlined for the council to consider removing him I think is very clear and premature at this point."

This is a developing story and will be updated as new information becomes available.