#SeaHomeless: Many treatments, still no cure 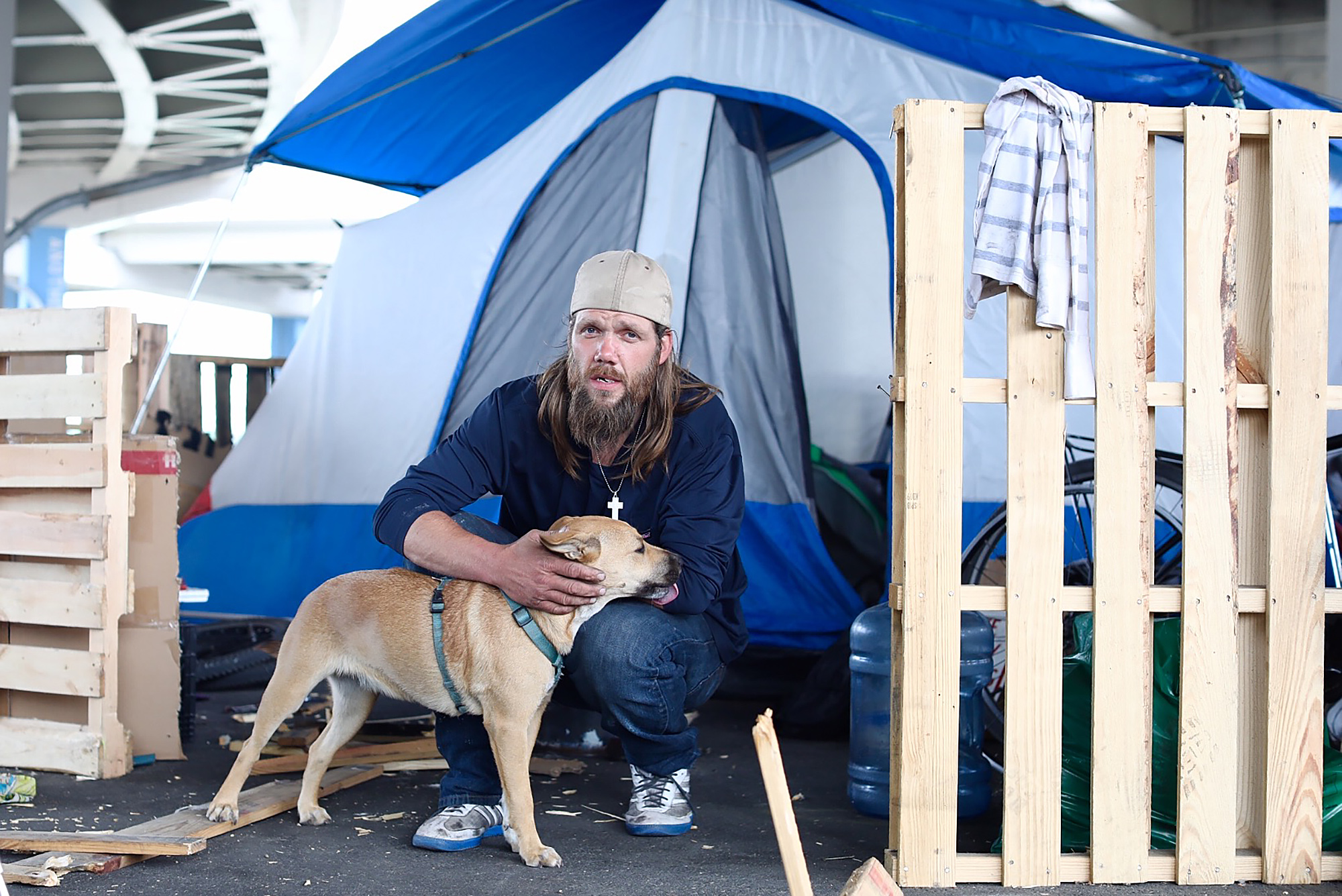 "Country" says he has lived on the streets on and off for 8 years. "I wish people would treat me like a human ... I always feel like a fish out of water," he says, underneath the Spokane Street bridge where he's been living after his previous encampment was swept by the city. "People look down their nose at me and are always judging me at first glance. Everyone makes mistakes and struggles, nobody is perfect. It's hard to get into housing when I'm trying to get clean, and that's what I need to help get away from temptation."

Last Wednesday, Seattle area media joined forces to shine a spotlight on the region’s homeless crisis. For the second year in a row, news outlets and nonprofits took Twitter by storm, using the hashtag #SeaHomeless to spread the word about homelessness — and possible solutions.

The numbers were remarkable: More than 20 media organizations produced three dozen stories for broadcast, print and the web. (Find a full catalog of them here.) Over the course of the project, more than 1,500 people used #SeaHomeless in 3,373 tweets, which were retweeted more than 2,000 times for a total of more than 38 million potential impressions.*

More remarkable were the stories. We will not soon forget Danielle Madrid’s story, told to KBCS’s Yuko Kodama, of slipping into homelessness as she fled an abusive relationship. Or Michael, the transgender youth profiled by Spark Public, who is juggling classes at a local community college between stints at homeless shelters. Or “Dee,” the mother of three who found shelter at Mary’s Place in Daniel DeMay’s story for seattlepi.com. Or Rebekah Demirel’s childhood story, published in Outside City Hall, of her father singing “The Green, Green Grass of Home” to a woman they called Cat Mary who lived in a shack on the banks of the Fraser River on the outskirts of Richmond, B.C.

Nor will we forget the stories about the many efforts to serve the homeless: the Recovery Cafe that serves recovering addicts (profiled in Curbed Seattle), Homestead, a new home for young women in Tacoma (King 5), the new Mary’s Place shelter in White Center (West Seattle Blog), the tiny house village in Olympia that started a movement (KCTS 9), and the many tech leaders and companies that are pitching in to address the crisis region-wide (Geekwire).

But perhaps the most lasting impact of the day’s work (actually weeks of work, of course), was the reporting done on solutions to the homeless crisis — and in particular, the city of Seattle’s favored remedy of late, called “rapid rehousing.”

The idea is simple: Get people who are experiencing homelessness back into housing as quickly as possible so that they can rebuild. In contrast to emergency shelters or “transitional housing,” which provide people with a temporary place to stay, rapid rehousing puts them into market-rate apartments. A nonprofit or a government agency helps foot the bill for a time, with the hope that they will find a way to pay the rent themselves.

As the Seattle Times reported, the city will pour more than $4 million into rapid rehousing this year, and even more in 2018. Trouble is, the system doesn’t always work as designed.

The Times profiled Townsend Tatterson, a 54-year-old former technical writer and charter fisherman who has struggled to find a landlord willing to rent to him, despite rapid rehousing assistance. The story continued:

Recent tracking numbers show that enrollees of local rapid rehousing programs, many of whom were living without permanent shelter at the time they enrolled, spent on average roughly 100 days looking for housing.

Nearly half of the people who left such a program in 2016 did so without securing a lease or move-in date, the numbers show.

Crosscut’s city reporter, David Kroman, wrote about Tammi Lynn, a landlord in Tacoma who reserves some of her apartments for folks who are struggling with homelessness. She has a soft spot for these people, Kroman found, because she has been in difficult situations herself. But even in Tacoma, rents are on the rise, and Lynn has been fending off offers from developers who might look upon the her clientele less charitably than she does.

Seattle Weekly’s Casey Jaywork interviewed Professor Rachel Fyall of the UW Evans School of Public Policy and Governance, who said that while transitional housing has not been effective at permanently reducing homelessness, this new approach is largely unproven.

“The unsatisfying truth,” Jaywork wrote, “is that we may just not know yet whether rapid rehousing is going to work, here or elsewhere.”

Meanwhile, the people who run the current network of emergency and transitional services — and the people who benefit from them, like Matt Hannah and his son, Devyn, profiled in the South Seattle Emerald — are concerned that the city's new direction could leave them out in the cold.

Which brings us to the final takeaway from the #SeaHomeless project: Homelessness is not a simple problem, and it therefore resists simple solutions. Until we address the root causes of homelessness — roots that run deep into our economic system and the way we treat (or don’t) addiction, mental health issues, domestic abuse and disparity — we’re apt to continue to lose ground.

Addressing those root causes starts with understanding them. In other words, we, as local media, have more work to do.

*Potential impressions are just the number of tweets and retweets multiplied by the number of followers from those Twitter accounts. It’s certainly not an exact measure of audience or impact, but gives you a sense of the breath of reach.