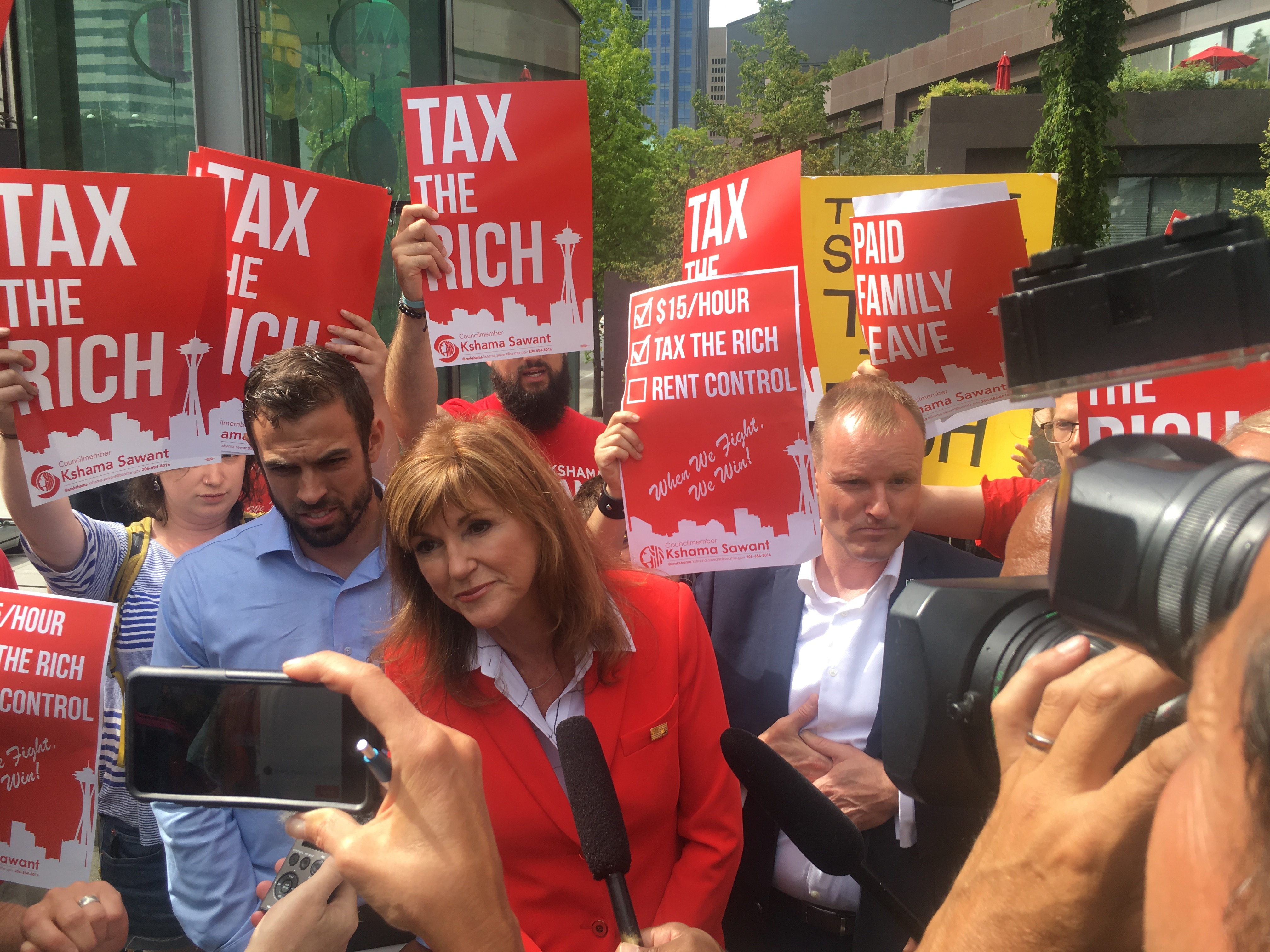 With pro-income tax demonstrators behind her, Susan Hutchison of the state Republican Party talks to reporters about her objections to an income tax.

It may not be legal and city officials aren’t exactly sure how they’ll spend any money they receive, but the Seattle City Council nevertheless passed an income tax on the city’s highest earners with a unanimous 9-0 vote Monday.

The ordinance came together remarkably quickly by Seattle standards: Mayor Ed Murray will sign the ordinance only months after a coalition calling itself Trump-Proof Seattle pushed the idea of passing an income tax.

Thanks in large part to a 1930s Washington State Supreme Court decision, there is no income tax in the state and the assumption is Seattle’s will end up in court — and quickly. In fact, less than two hours after the vote, the conservative Freedom Foundation issued a statement saying it will file a lawsuit. "It’s manifestly illegal and unconstitutional in Washington to impose a tax that treats people differently based on income level,” said Freedom Foundation CEO Tom McCabe in the statement.

But this is no surprise; in fact, activists are counting on it. That’s because while the idea of a local income tax is welcomed by many in liberal Seattle, it’s the higher goal of opening up the possibility statewide that has the greatest appeal to its proponents. Seattle’s tax is a grenade, meant to blow up that nearly 90-year-old court decision and clear the way for a reshaping of the state’s tax code.

“But you know what? When people hear this, it doesn’t make them any less willing to support this effort. If anything, it makes people feel even more urgency to take a stand and press forward.”

Mayor Ed Murray struck a similar tone. “This legislation will face a legal challenge,” he said Monday during a rally outside City Hall. “But let me tell you something: We welcome that legal challenge. We welcome that fight. Because when we win that battle, like we did on the minimum wage, it won’t just be Seattle that’s doing a progressive income tax.”

Washington state has what is often described as one of the most — if not the most — regressive tax systems in the United States, meaning that lower-income individuals and families pay a larger share of their income in taxes than wealthier ones. This is aided in part by the ban on an income tax as well as the state’s cap on property tax revenue. Council members unanimously spoke about how, in the end, the ultimate change should come from Olympia. But Olympia moves slowly and, as Councilmember Kshama Sawant put it, "we're not holding our breath" that dramatic change will come anytime soon.

There is some bipartisan agreement that Washington's tax system needs tweaking, but conservative advocacy groups, like the Washington Policy Center, along with Washington Republicans, hate the idea of an income tax, pointing to Washington’s lack of either capital gains or income taxes as a boon for business and job creation.

Immediately following the vote, the chair of the Washington State Republican Party, Susan Hutchison, spoke near the entrance of City Hall as pro-tax protestors largely drowned her out with chants of "tax the rich." Hutchison said the tax is illegal and would go down a slippery slope, starting with Seattle's richest and creeping down to the middle class. Pointing to past, statewide rejections of the income tax, she said people don't want one.

Although Hutchison said she, too, expected a lawsuit, she said it would not come from the state Republicans.

While it could be months or years until proponents get the court hearing they want, discussions in City Hall proceeded under the assumption the council was creating an actual policy. Under the law, any income over $250,000 would be taxed 2.25 percent, bumped up last week from the original 2 percent proposal. So, if a person makes $300,000 a year, $50,000 would be eligible for the tax, creating a bill of $1,125 a year.

The tax would only apply to people living in Seattle and not to people who commute to work from elsewhere. As Danny Westneat at the Seattle Times has pointed out, that means seven of the eight most active billionaires in the Seattle-area — including Bill Gates, Paul Allen and Jeff Bezos — would not have to pay the tax. Only the former Starbucks head Howard Schultz would get dinged.

Still, the city estimates the new revenue source could bring in as much as $140 million a year. Officials also guess it could cost as much as $13 million to set up the proper infrastructure to administer the tax and up to an additional $6 million a year in staffing.

The original intention of the Trump-Proof Seattle coalition was to create a buffer against what its members saw as the threat of the new Trump presidency. “The November election has placed our federal government in irresponsible and dangerous hands,” reads a letter sent to the mayor and council last March. “In Seattle we are already grappling with the triple crisis of rising housing costs, displacement, and homelessness. We, the undersigned organizations and individuals, call upon you, our elected officials, to take swift action to raise new progressive revenue that will allow us to weather the coming storms and ensure a dignified standard of living for every person and every community in our city.”

In council chambers before the vote, a parade of pro-tax speakers took to the mic, among them several young, self-proclaimed wealthy residents begging to be taxed. Ashok Chandwaney, 24, an employee of a "large, local tech company," showed no qualms proclaiming that he's rich (he said he could afford to have seven apartments) and felt the city should do more to extract resources from him.

How the money would be spent, exactly, could be discussed more specifically during this fall’s budget talks. However, the ordinance passed does lay out some vague, wide-ranging guidelines for use: "lowering the property tax burden and the impact of other regressive taxes, including the business and occupation tax rate; addressing the homelessness crisis; providing affordable housing, education, and transit; replacing federal funding potentially lost through federal budget cuts, including funding for mental health and public health services, or responding to changes in federal policy; creating green jobs and meeting carbon reduction goals."

Next steps for the city depend on when and where any lawsuit is filed. If the Freedom Foundation makes good on its word Monday, it will be up to the City Attorney's Office to explain why they think the ordinance should be allowed. City Attorney Pete Holmes said he was confident they had an "outstanding legal team to craft the best policy and to defend it."

This won't be the first time Holmes and his team has been on the receiving end of legally questionable legislation: In 2015, the council passed legislation to allow Uber and Lyft drivers to unionize, a first. They acknowledged at the time that the city was sticking its neck out, but did it anyway. In April, a judge temporarily suspended the city’s implementation of the law.

The income tax is likely even more of a leap, but the council has now passed it.

Monday, July 10, 4:45 PM: This story has been updated to add Hutchison and then the Freedom Foundation's statement about a lawsuit.