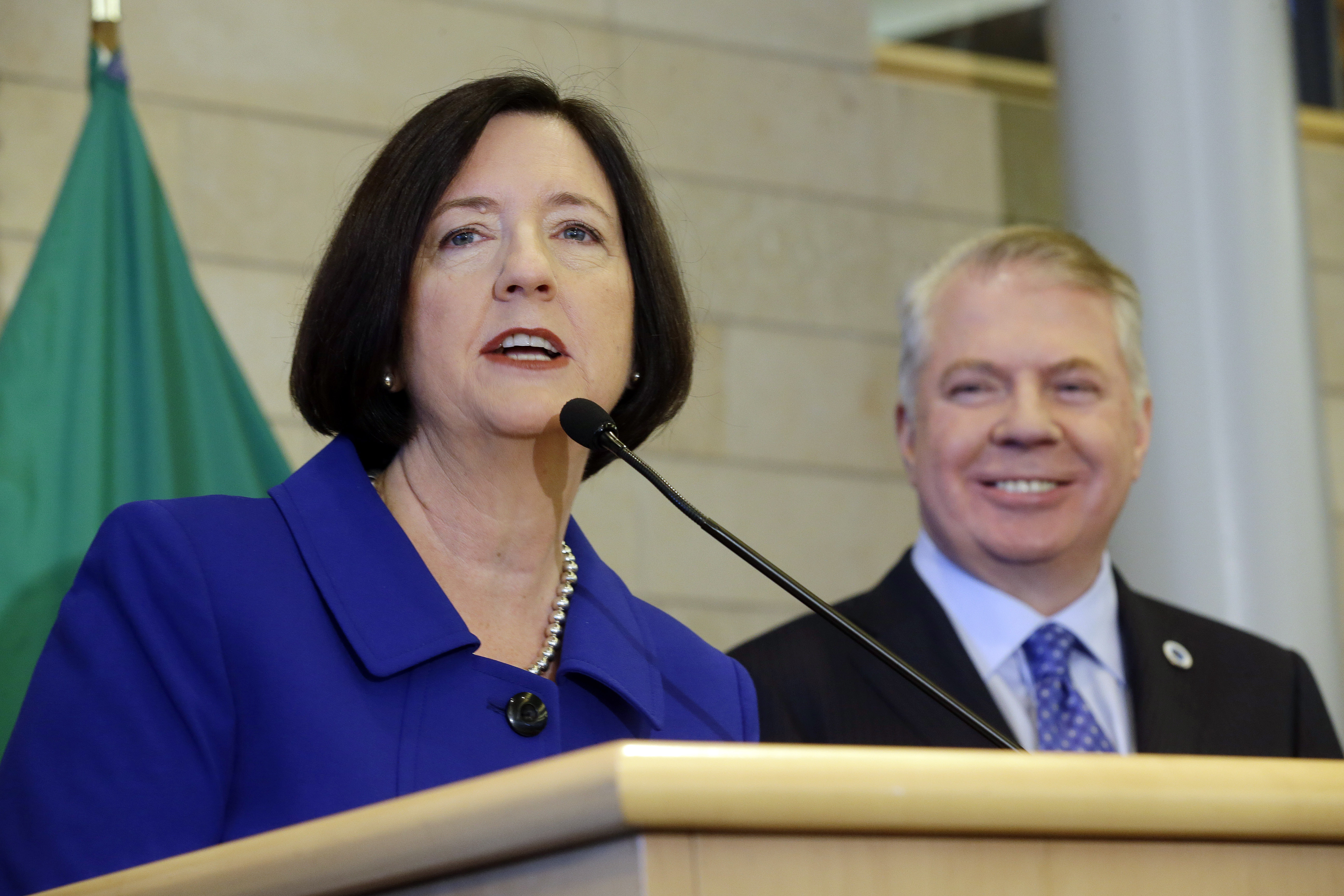 Seattle Police Chief Kathleen O'Toole in a May 19, 2014 photo when she was then-former Boston police commissioner and was being introduced by Mayor Ed Murray, right, as his nominee to oversee the SPD. (AP Photo/Ted S. Warren)

Ever since Seattle Police Chief Kathleen O’Toole took a part-time gig advising Ireland's national police, speculation has swirled about her possible departure. O'Toole has thus far denied most of those rumors. But in a phone interview from Ireland Tuesday, she left the door open.

“It’s the end of the administration,” she said, referring to Mayor Ed Murray's departure at the end of this year.“My contract coincides with the mayor’s contract. So who really knows? ... I’ve never had any expectations beyond Mayor Murray’s tenure.”

When asked if that meant she was leaving at the end of his term, she replied, “I don’t know. I guess I’d have to see who it comes down to in August [after the primary].” She added, “I’m not auditioning for any jobs” and said the job working with the Irish Garda has been unpaid.

Regardless of whether or not O’Toole takes another job, three of her five top leadership staff have either already left the department or are actively looking for positions elsewhere.

Deputy Chief Carmen Best, second in command to O’Toole, is a finalist to become the chief of police in Dallas, a Seattle police spokesperson confirmed Tuesday.

And fellow Assistant Chief Perry Tarrant is reportedly among the finalists to become the chief of police in Portland.

O’Toole recruited Merner and Tarrant in 2015 from outside Seattle — Merner from Boston, Tarrant from Yakima — bucking longstanding practice in the Seattle Police Department to hire assistant chiefs internally. O’Toole went to great trouble to bring them in, striking a last-minute deal with the Seattle Police Management Association to avoid an unfair labor practice complaint. In order to do so, she demoted sitting assistant chiefs Mike Washburn, Robin Clark, Tag Gleason and Paul McDonagh.

Merner oversaw Seattle's Criminal Investigations Bureau. Before coming to Seattle, he was among the command staff that responded to the Boston marathon bombing. In a recent movie about the bombing, he was part of a mash-up character played by Mark Wahlberg.

Tarrant is currently the head of the Special Operations Bureau and was sworn in as president of the National Organization of Black Law Enforcement Executives a year ago.

Best is a longtime Seattle veteran whom O’Toole promoted to deputy chief from assistant chief. She’s often present at community meetings and is highly respected inside and outside of the department. She was recently accepted to participate in the Police Executive Leadership Institute, a program to develop future chiefs.

On the real and possible departures of her staff, O’Toole said, “I wouldn’t read too much into it. I think it’s a real tribute to our organization that people are being encouraged to throw their hats in the ring.” She said she was confident in her leadership team, which includes assistant chiefs Lesley Cordner and Steve Wilske, as well as civilian Chief Operating Officer Brian Maxey.

Speaking with Crosscut last month, Chief Merner said he took the job in Portsmouth to be nearer to his family. His son recently had a baby. “It was time to take a chief position and [Portsmouth] is also an hour, hour ten north of where my grandchild is.”

But Merner also said he likely only had one more year to his Seattle tenure when the Portsmouth job came up. “When I went out to Seattle, I was looking at maybe three or four years working through the DOJ process,” he said, referring to the city's agreement with Department of Justice to overhaul the police department.

O’Toole said Tuesday that the department is close to filling Merner’s position, which she said had been posted to both internal and external candidates, but that they did not have a final candidate.

O’Toole was hired by Murray with the mandate to usher the department through the federally driven reform process. For a chief of police in a major American city, she has generally managed to stay impressively above the fray. Councilmember Tim Burgess told King 5 Tuesday, "Chief O'Toole has brought new professionalism to our police service, she has increased transparency and accountability, she has established new and higher standards."

But in the aftermath of the Charleena Lyles shooting death by police in June, impatience with the pace of the reforms and a heated mayoral race, O’Toole has more recently found herself folded into the political discussion. She was blasted for not attending a community forum to discuss the Lyles shooting and support for her among mayoral candidates has been, at best, waffling. Former Mayor Mike McGinn Tuesday criticized her for her trips to Ireland, saying she should stay in town.

In a hearing Tuesday, U.S. District Judge James Robart said the department still has “a ways to go” before fulfilling the consent decree. With Murray on his way out, O’Toole may end up needing to decide between serving a new mayor or leaving before the DOJ reforms are complete.