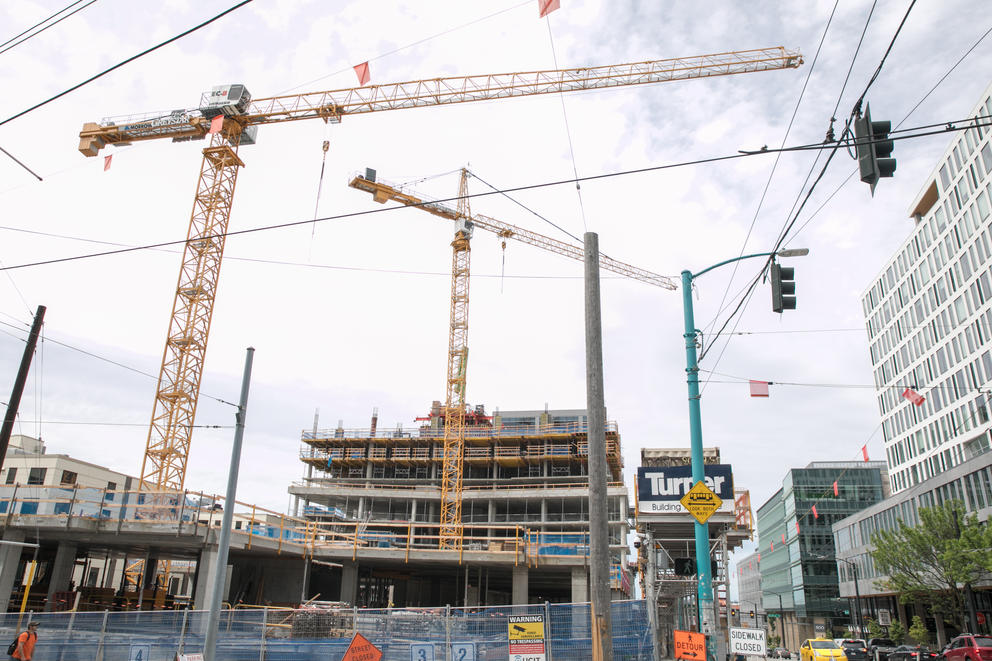 After being told to prepare for more density with the passage of the Growth Management Act 25 years ago, many Eastside cities decided that growth — if it was coming — should pay for itself. Those cities adopted impact fees, one-time charges to new development to help pay for the expansion of public facilities such as roads, parks and schools as the population grows.

Leaders there think their cities and residents are better off.

As Seattle’s population tops 700,000, many see city infrastructure as struggling to keep up. Cars and buses are stuck in gridlock, miles of sidewalks need repair or are missing entirely and overcrowded schools force many students to learn in portable units. Is there something for the city to learn from its neighbors' use of impact fees?

Although Seattle leaders have long pushed aside any action on impact fees, the city has plans to explore the idea seriously next year. Whether the plan stays on track when Mayor Ed Murray leaves office at the end of the year is open to question, but a number of candidates to replace him have spoken favorably about impact fees or making developers help pay for growth, including at a KING 5-KUOW debate on Monday. With city leaders having had to repeatedly persuade residents to increase property taxes to fund the city’s basic needs, collecting impact fees could be an attractive option for relieving growth's demand on public infrastructure.

“Seattle has been very successful in having people want to live there, and the pressure on infrastructure, services and quality of life issues obviously is mounting,” said Dave Williams, director of government relations for the Association of Washington Cities, a non-profit advocate for urban governments.

“The [Growth Management Act] came about in a time not dissimilar to right now — with a boom and a lot of growth pressures,” he said. “There were demands from the public, and city and county officials, to have a way to pay for the infrastructure and the services associated with this growth.”

“The argument that growth will pay for itself over time didn't ring true to a lot of people,” Williams added.

The Growth Management Act allows cities to collect impact fees for public streets and roads, parks, schools and fire protection facilities. Impact fees are tightly regulated: They must be used within 10 years of collection and can only fund projects on a city’s capital facilities plan. Cities must develop policies for how these funds are collected and used, establishing ties between growth and projects. Funds cannot go to the relief of existing growth pressures.

Even with the limitations, Eastside cities find the fees useful. Eric Shields, planning and building director for Kirkland, said, “Impact fees have been a significant contribution to our ability to finance public improvements.”

The city, about an eighth the size of Seattle in area and population, collected over $5 million in road and park impact fees in 2016. Kirkland, like many other Eastside cities, collects impact fees on both new commercial and residential development.

Sammamish, charging the highest impact fees on the Eastside, collects roughly $30,000 for every new single-family home built. City officials assert that growth is paying for growth, and it plans to use road impact fees to fund 87 percent of a $16.5 million street-widening project.

Many in real estate and development find the whole idea of impact fees wrongheaded. Developers already pay for growth through real-estate taxes and through the State Environmental Policy Act (SEPA) process, which requires developers to make street improvements near new developments, argues Roger Valdez of Smart Growth, director of the pro-development group Smart Growth Seattle, a partner of the Master Builders Association.

“The real-estate excise tax, along with the fact that we already replace and improve infrastructure and bring it up to a higher standard than what is currently there, in my view nullifies the need for impact fees,” Valdez said. “There is a substantial amount of money that’s already coming out of these funds and it’s coming from growth.”

Last year, Seattle collected more than $76 million in real-estate excise taxes, which is used for a variety of city projects and programs, including transportation.

Developers and builders do pay a lot of taxes, said proponents of impact fees, but not enough to pay for services or build the infrastructure needed. Valdez said residents who support impact fees view them as a way to penalize developers.

In 2014, the City Council began to consider using impact fees to fill funding gaps. A report produced the following year found impact fees could have a “beneficial role in supporting the capital funding requirements associated with growth and development.”

“There are a few areas where impact fees could be used to support additional funding for priorities like transportation and school construction,” said Jason Kelly, a spokesperson for the city’s Office of Planning and Community Development.

Kelly said recently that the current administration has had other priorities with the implementation of the Housing Affordability and Livability Agenda along with the Mandatory Housing Affordability program, but was interested in conducting a public conversation on impact fees in 2018. Currently, the city is developing an initial proposal for a transportation impact fee. After the Parks Development Plan is completed, it plans to work on a proposal for a park impact fee. A school impact fee, which is set by school districts, is also being evaluated by the city.

There’s interest on the City Council in pursuing the idea.

“Other cities across the state have effectively used impact fees to improve their roads, schools, parks and more. So can we,” Councilmember Sally Bagshaw wrote in an email. “Growth needs to pay its fair share of growth, and I will be supportive of the discussions and want to hear all sides of this debate.”

Jennifer Anderson, government affairs manager for the Master Builders Association, warned that any additional fees imposed would likely be passed along to buyers or renters.

“The increasing use of impact fees and the costs that they add to development raise serious concerns about the effect using impact fees to fund infrastructure will have on the affordability of housing,” Anderson wrote in an email. “The reality is that impact fees disproportionately affect new homebuyers, especially those at or below the median family income.”

When Valdez years ago lobbied for the Washington State School Directors Association in support of school impact fees, he often heard developers make that argument against impact fees, saying the first buyer of that new home would end up paying the fee and not the developer.

“I remember just being really frustrated by that, because I felt it was such a cop-out of an answer,” Valdez said. “Twenty-five years later, I look at it now and that is the economics of it.”

“There isn’t a way to offset the additional costs, except through increasing rent or the sales price,” he added.

Shields, Kirkland’s planning and building director, disagrees. “With high housing prices, impact fees are not a huge chunk of the cost," he said. "When the houses are selling for $1 million, it doesn’t seem to make a difference.”