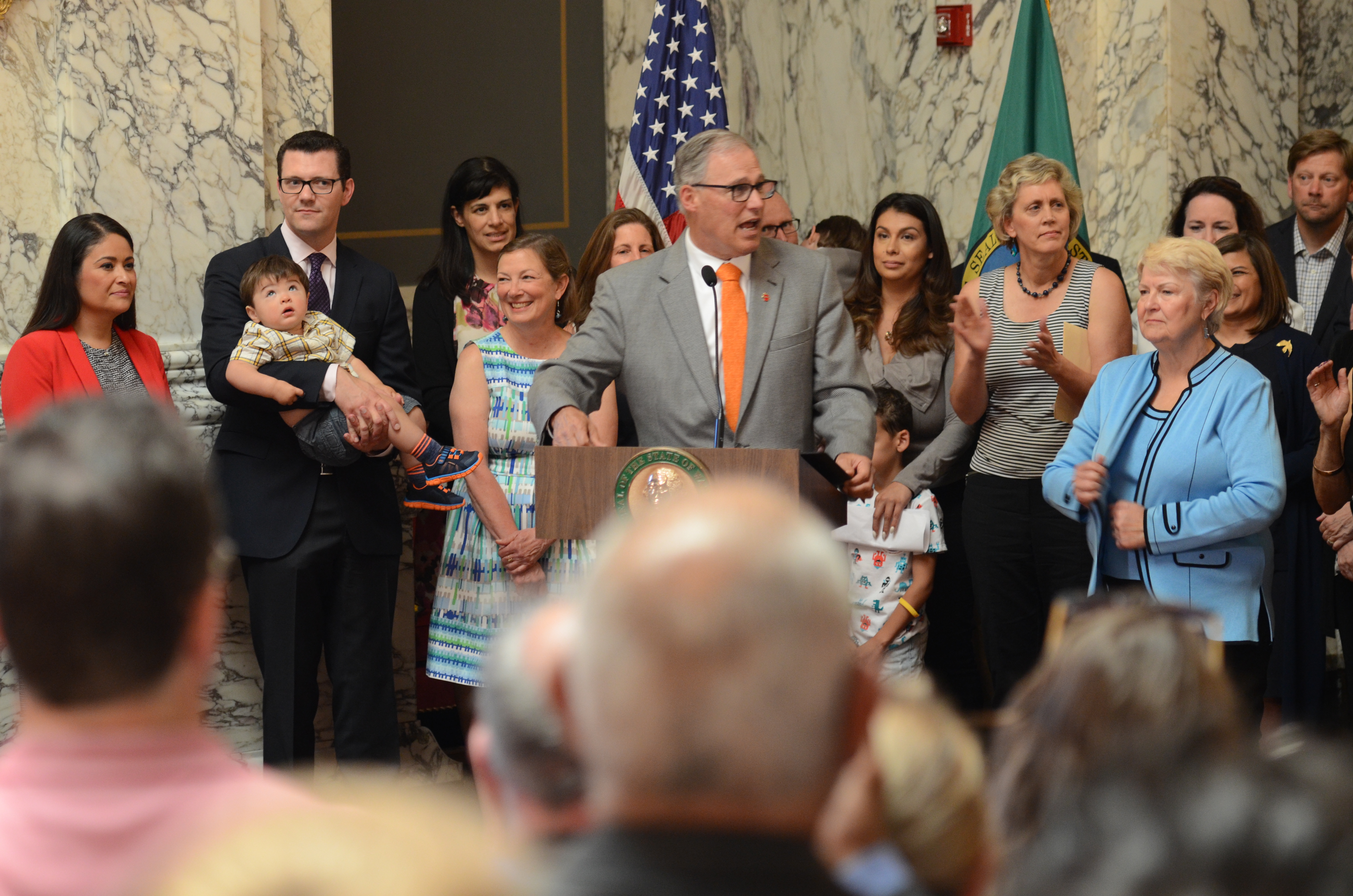 To Rhonda Parker, a mother from Lacey, it’s not a question of “if” but “when” an employee will need time off to help a family member or deal with a health problem.

“All of us face one of those unexpected life emergencies,” she told a Washington Senate committee in January. Returning to her blue-collar job two weeks after giving birth, she suffered complications that led to a partial hysterectomy — and more time away from work.

Her family fell behind on rent but stayed afloat with the help of her church and a food bank. But, she said, “Paid family leave could’ve preempted the financial troubles I went through.”

On Wednesday, Gov. Jay Inslee signed a bill that will make Washington the fifth state to require paid family and medical leave for employees, beginning two and a half years from now, on Jan 1, 2020. The state law will cover many workers missed by the federal Family and Medical Leave Act, which requires only unpaid leave and generally exempts workplaces with fewer than 50 employees.

Inslee praised the bipartisan collaboration that went into the passage of the bill, saying it will be the best leave program nationally. Supporters of the measure said that the new law can serve as a model for other states looking to help families and parents, in part because of its payments — frequently 90 percent of regular pay and 100 percent for some lower-wage workers. At the ceremony, Democratic Rep. Frank Chopp, the usually reserved Speaker of the House, proclaimed, "This is the largest expansion in social security in Washington state. Hallelujah!"

Last Friday evening, both the state Senate and the House of Representatives passed the measure with strongly bipartisan majorities, including 13 of the 25 Republican caucus members in the Senate.

The final bill, sponsored by Republican Sen. Joe Fain of Auburn, grew out of two months of talks among Republicans, Democrats, business interests and labor. The powerful Association of Washington Business supported the bill, as did labor and many other business interests.

Fain said that for someone with a serious illness, the bill could be the difference between sliding into poverty or getting back on track smoothly.

The program will be financed by a 0.4 percent deduction on each paycheck. An employee must work 820 hours at business before becoming eligible. Small businesses that choose to pay all the premiums for their workers will be eligible for relief for various types of state aid in hiring temporary replacement workers. Companies can voluntarily set up stronger paid family leave programs for themselves.

In return, the state will provide paid family leave for up to 12 weeks after the birth or adoption of a child. Leave pay will vary from $100 to $1,000 a week, based largely on percentages of employees’ wages. The program will provide up to 12 weeks at a time for sick leave for a seriously ill person or for a person to take care of a seriously ill relative. Multiple sick leaves cannot total more than 16 weeks a year, although an extra two weeks can be allowed for pregnancy complications.

Sara Reilly, co-owner of an Olympia cafe and brewery, said, “Small businesses like ours couldn't afford paying for paid family and medical leave entirely on our own, though I know how important that time off is, especially after having cared for my mother through her last days. This is a good approach that's fair to everyone.”

Not all businesses agreed, though. The National Federation of Independent Businesses recently came out strongly against the bill and found allies within the GOP Senate caucus. But a strong incentive for many businesses and the GOP to support Fain’s bill has been the threat of a labor-backed effort to take paid family leave to a public ballot in November. Lawmakers generally feel that they can write more nuanced laws that different sides can live with, while an initiative is a blunt instrument with no chance to iron out differences on details.

Sen. Michael Baumgartner, R-Spokane, argued against Fain’s bill, “The full context of this is that Washington state is the toughest state in the country for small businesses. … It’ll be a burden in an already tough state.”

But Sen. Mark Miloscia, R-Federal Way, replied, “The message we send to the rest of the world on how we treat each other …. says volumes about Washington state.”

The concern about parents having to go back to work so quickly after a birth or adoption played into the debate over the bill from start to finish. At the same January hearing where Rhonda Parker spoke, family physician Dr. Edie Lang said, “Far too many mothers go back to work before they should.” Lang said she herself came down with an infection and complications after initially returning to work 10 days after giving birth.

As lawmakers got ready to vote, bill sponsor Fain said, “Twenty-five percent of new moms have to go back to work two weeks after giving birth.” Beginning in 2020, a lot of parents and other workers needing family or medical leave will have new options.