Another incident involving a Native woodcarver and Seattle police 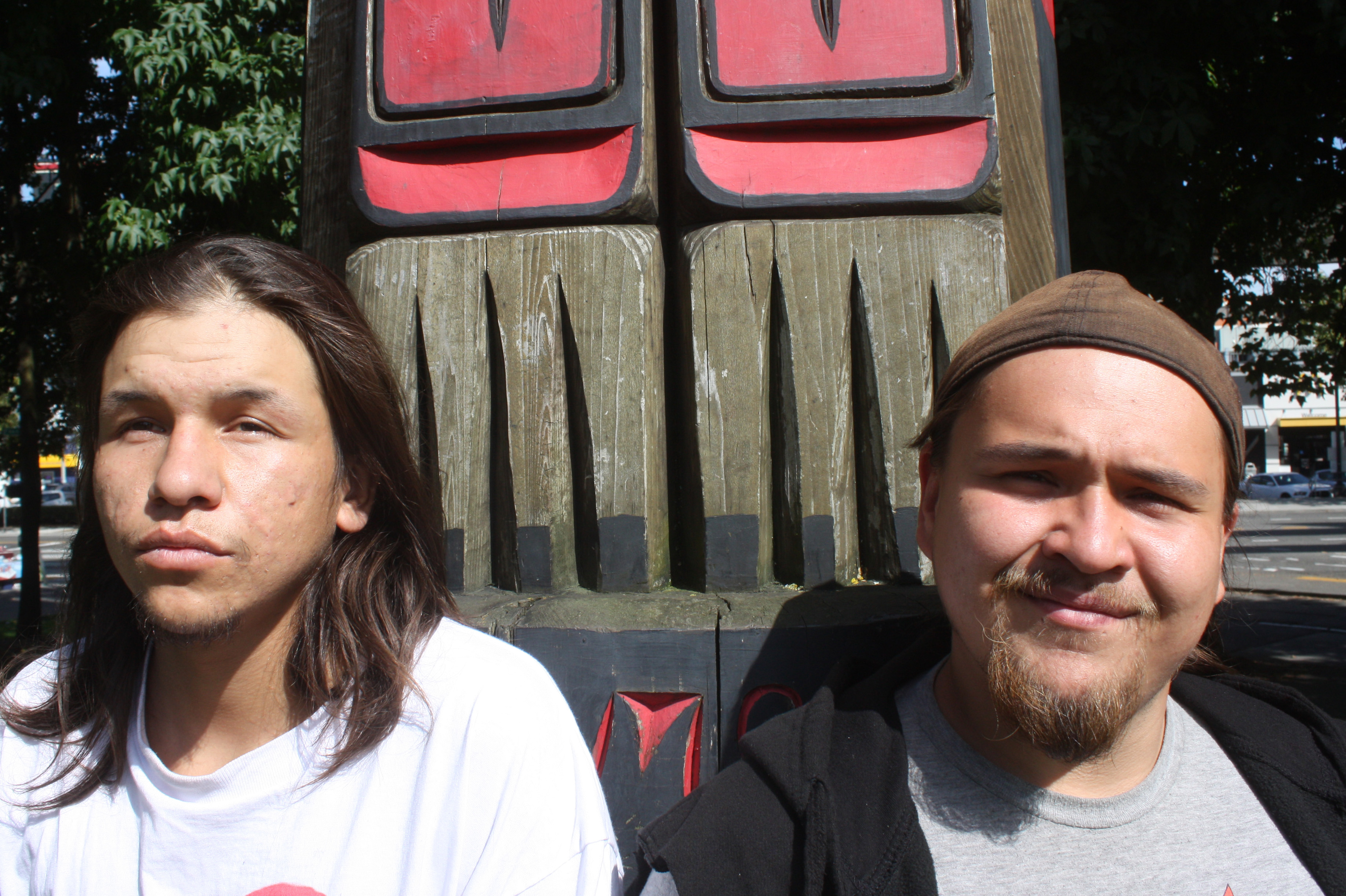 Eagleson Williams, left, and brother Thunderheart Williams at a totem pole in Seattle Center on Wednesday.

Virtually on the eve of the seventh anniversary of Native-American woodcarver John T. Williams’ death by Seattle police — an event that helped spur a federal civil rights investigation into the department’s use of force — a young woodcarver said he was roughly and wrongly arrested after a brawl broke out near Pike Place Market.

Bystanders, surprised at the sudden arrest of a man who appeared to have little or nothing to do with the brawl, captured video of Eagleson Williams being grabbed by officers and held against a car.

“Seven years and we are still getting [screwed] by the police,” said Eagleson Williams, who is 23. “I’m just a number and a paycheck for them.”

Eagleson Williams spoke to Crosscut on Wednesday in Seattle Center before he, his brother and two friends paid respects to the slain woodcarver at a nearby totem pole erected in the uncle’s memory.

Police arrested Williams on suspicion of obstructing officers on Monday.

The tragedy involving his uncle occurred on Aug. 30, 2010, when a Seattle police officer said he felt threatened by John T. Williams, 50, who was carrying a closed woodcarving knife. The officer told Williams, who was hard of hearing, to drop the knife before fatally shooting him, and the department’s firearms review board ruled the shooting unjustified. The officer resigned before the department formally fired him. Later, the city paid $1.5 million to the Williams family, who belong to the Ditidaht First Nation, a tribe with roots in Vancouver Island.

On Monday, Eagleson Williams, his brother Thunderheart Williams, 24, and friend Tristen Bonneville, 21, finished work for the day as woodcarvers and went to Victor Steinbrueck Park in Bonneville’s car about mid-evening to check in with a family member. They left Bonneville’s car running with the key in the ignition. The Williams brothers said they left their woodcarving knives in the car; Bonneville, who is learning the craft from Eagleson, had seven woodcarving knives but they were in his pockets, he said.

Then a minor street brawl erupted around Bonneville’s car among some of their acquaintances, the trio said.  A young woman hit her boyfriend and he pushed her back, according to the police report. Two more people, who the Williams brothers and Bonneville also knew, got involved in the fight and a short, confused melee occurred next to Bonneville’s car, the three said.

The woman and her boyfriend each ended up punching or kicking the first man who intervened, the police report said. The fighting stopped with the participants and several onlookers standing around. The police report said five people ultimately participated in the fight, including Eagleson Williams.

The Williams brother and Bonneville did not take any real part in the fight, all three said.

After the fighting stopped, police, who had apparently been summoned by an onlooker, arrived. Eagleson Williams said he reached into Bonneville’s car to turn off the ignition. Officers grabbed him and Thunderheart Williams, and roughly forced them to put their hands on the hood of Bonneville’s car, the three said. “I wanted to shut the car off and they assumed I was going for a knife,” Eagleson Williams said.

He said he had no intention of reaching for one of the woodcarving knives, which were located in the car’s center console.

The officer’s report said Williams was standing on the driver’s side of the car. “He looked up as I approached and then quickly leaned into the front driver’s window," the officer wrote. "He was leaning in up to his waist. [The officers'] concern was that he was reaching for a weapon. When Williams came back out of the vehicle he had a black handled knife in his right hand. Williams refused to obey ... orders to stop and he attempted to walk away around the front of the vehicle. Officers physically stopped him but he refused to cooperate. It was determined that he no longer had the knife in his hand.”

The report went on: “Williams continued to attempt to walk away stating that he did not have to comply with us. He was stopped and escorted to the hood of the vehicle. Williams began to struggle to get away from officers. Officers attempted to place Williams into handcuffs. Williams resisted by pulling his arms away from officers. This necessitated officers control[ing] him by applying control holds on his arms and upper body. Officers were able to get Williams into handcuffs. He was then searched for weapons. I recovered two folding knifes [sic] from his pockets. One of them was the black handled knife that he had previously had in his hand.”

Eagleson Williams said he struggled as he was pushed to the hood.

A video shot by Devon Connor-Greene, a recently graduated law student at the University of San Francisco from the Olympia area, confirms this, showing three officers — later joined by the fourth — engaged in pinning down Eagleson Williams.

Eagleson and Thunderheart Williams believe they were singled out because they were the only Natives at the scene. Bonneville, who is white, said he was the only one of the three with any knives and officers did not search him.

Law grad Connor-Greene, who was in Seattle visiting family and friends, expressed dismay at the police handling of the incident. “[The police] arrived moments after the fight had ended,” he wrote in an email to Crosscut. “Without asking questions, they charged in and arbitrarily grabbed a young man.”

“I was telling them my rights as a human being,” Eagleson Williams said, who added that one officer twisted his left arm behind his back. At the time, Eagleson Williams said, he thought there were more than the four officers at the scene — in the video, others can be seen near the car — and flashbacks of his uncle's shooting death entered his mind while he was on the car's hood.

“It reminded me of what they did to my uncle,” he said.

The arrest of Eagleson Williams and two of the fighters proceeded without incident. One woman was arrested on suspicion of domestic assault. She and her boyfriend were both charged in connection with injuries to the first man who intervened. Thunderheart Williams was not arrested or charged.

Alluding to one of the key issues in the police reform efforts that have followed John T. Williams' death, Connor-Green wrote: "The police should be a de-escalating force in our communities, yet here, as they do so often, they arrived on scene, only to further exacerbate the situation at hand. The officers claimed this was necessary for their safety, yet, if you are only focused on one person, an innocent person, and the actual perpetrators are milling around behind you unnoticed, how safe are you?"

At the scene, Eagleson Williams complained to police that his left arm and wrist hurt badly, and he said officers laughed at him during a medical exam at the jail.

Eagleson Williams was released on $1,700 bail; his first court appearance is scheduled for Oct. 9 in Seattle Municipal Court. He said officers also found a 6-year-old bench warrant on him for a drunk driving charge, which he incurred shortly after his uncle’s death.

Since then, the younger Williams has been battling depression, his recent arrest only making things worse, he said.

“I’d rather get shot by cops and die than to live this life,” Eagleson Williams said, tears pooling in his eyes. “It’s not worth it.”