Years of work to save a fish species might be... dammed 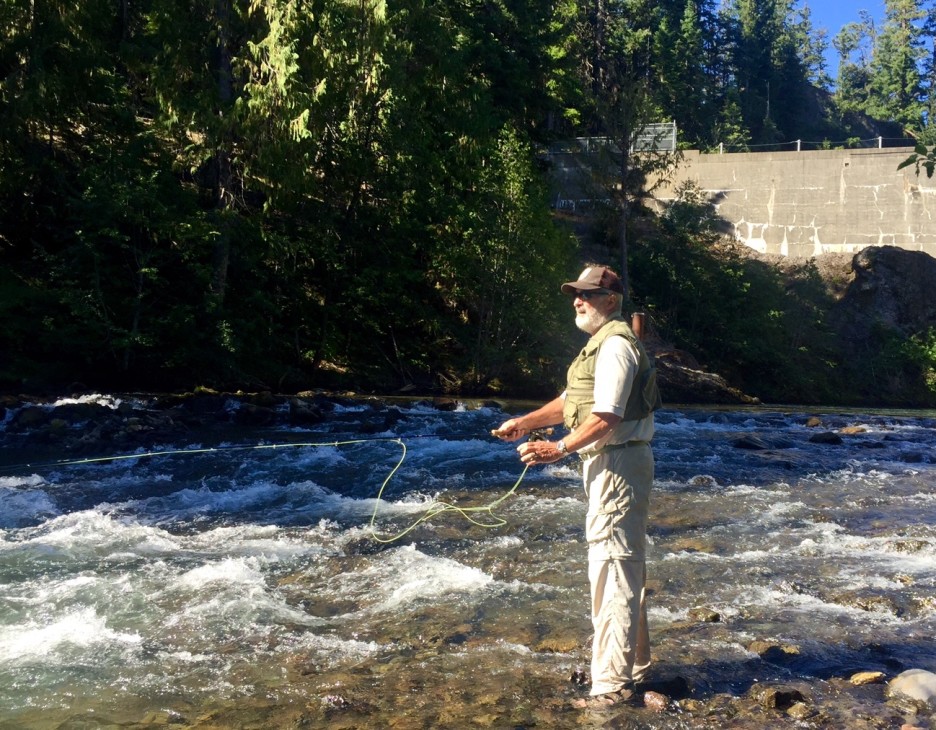 Jeff Thomas fishes for bull trout at the base of Clear Creek Dam. He's hoping to catch the fish to help move them around the dam.

A chilly pool of water forms at the base of Clear Creek dam in Washington’s Cascade mountains. Somewhere — hiding in the depths of the water — are several bull trout. They’ve migrated up this creek and are hoping to make it to cooler waters at higher elevations.

But they’re out of luck.

In their way is a big slab of concrete, a dam built in 1914. Its reservoir, Clear Lake, is a recreation area where kids with disabilities or terminal illnesses can spend carefree summer days.

“I wonder how many times we’ve driven up this road, when we were coming up the Tieton Canyon. I think it’s probably most the traveled road in my life,” Thomas said.

It’s a bumpy Forest Service road along the North Fork Tieton River. You can see the dam’s spillway just around the bend.

Two fish ladders at the spillway weren’t built properly, and so they’re useless for giving fish passage to the waters above the dam.

“It’s just really, really violent high hydraulics, and they can’t make it up it — under any conditions,” Thomas said.

There is a legendary story of a problem fish, a hybrid of a bull trout and a non-native brook trout, that made it up the fish ladder four times. In one amazing stretch of time, the fish spent 12 days hanging out in the spillway. No other fish had been detected making it up the fish ladder before or since.

“She was very athletic,” Thomas said.

Thomas helped discover this population. He led a snorkeling team up seven miles of a rugged river searching for any signs fish were reproducing there.

Thomas has fished, waded and swam in these waters help move these bull trout to better habitat.

“My entire career, there’s been very few days where I didn’t want to go to work,” he said.

He’s so invested in this run that he’s putting off his retirement — after a federal hiring freeze could mean his job won’t be replaced. That could endanger this bull trout run he’s spent most of his time trying to save.

“It’s disappointing,” Thomas said of the hiring freeze. “I’ve worked a long time here. I’ve got a legacy here. Just to let it go — I just can’t do that.”

Moving these fish is a lot of work. It’s something he’d like someone else to takeover — until there’s funding to build better fish passage.  “I kind of consider them my population,” Thomas said.

Some of “his population” is stuck at the base of this impassable dam. Others are spawning in the cold, glacier-fed water above Clear Lake.

Bull trout don’t migrate out to sea like salmon. Migratory bull trout spend time in lakes but swim upstream to spawn in cool, clean water where they were born. Many bull trout runs are threatened by fragmented habitat, often blocked by impassable dams.

This run of fish — if they move downstream — can’t get back.

“With global warming happening, it’s important that we allow the fish to get to this cold water refugia or they’ll disappear,” he said.

Bull trout have a very strong draw to the streams where they were born, Thomas said, and very few stray to different areas.

Funding for a better fish ladder is in the works. There’s a possibility to tie it to a regional water plan that’s working to improve future water access for fish, agriculture, and cities.

But that’s a long ways off.

So, for now, federal and state fish biologists move them by hand. For the past few years, their main tools have been rods and reels.

This year they’re upping their game.

Pat Monk, a fish biologist with the U.S. Fish and Wildlife Service, started pumping air into a small boat.

Picture an inflatable raft with oars. Monk stood on the front of the raft with a tangle net, as other biologists paddled him around the pool at the base of the dam. Every so often he’d pull the net up with a fish trapped inside.

“They get their get teeth tangled up,” Thomas said. “And then they get all freaked out, and they start to roll around and get tangled up.”

“Holy smokes, we hit the mother load,” said John Easterbrooks, regional fish program manager for the Washington Department of Fish and Wildlife, after they wrangled four fish into the net.

Several hours and eight fish later, the biologists get to work. They first drug each fish with an anesthetic. Then they take DNA samples to make sure they’re moving the right fish — and not some from another population in the basin. This year they get rapid DNA results 12 hours later.

The biologists measure the length of each fish, surgically implant a pit tag the size of a grain of rice, and inspect each fish for any identifying marks that might mean they’re one of the hybrid fish.

This year, the group moved 19 fish above the dam, a couple more than the previous year.

“This is just a stopgap measure. The fish need to be able to move on own. On their own timing,” Monk said.

It’s a lot of effort for a few fish — but it’s an effort they say is well worth it. They said they’ve made a big difference in the number of fish making it to cooler waters beyond the dam.

“If we had passage we would be in good shape,” Thomas said.