Can the Ethiopian community hang on in Seattle? 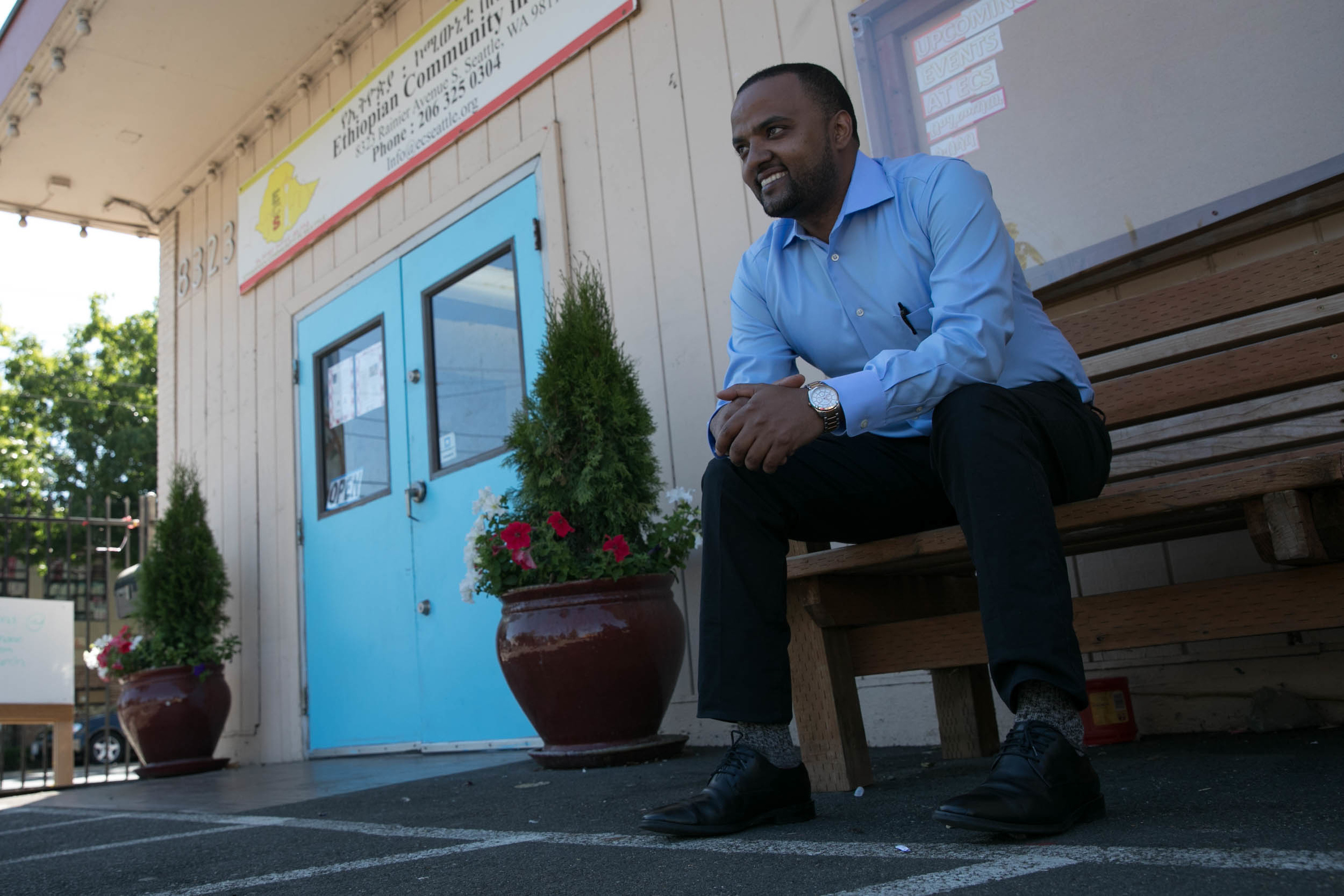 While the Rainier Beach neighborhood has long been a thriving center for Ethiopian Americans in Seattle, many community members are worried about preserving connections amid rising real-estate prices, gentrification and the economic challenges for many elders who immigrated here.

Most community members now live miles from here, many in more-affordable cities like SeaTac, Tukwila, Kent, even Tacoma, according to Habtamu Abdi, an East African community leader. And while many still come here to run businesses, worship or just get together, there's worry about maintaining connections to the neighborhood.

Community members have been working for more than a year to create a housing project for seniors and other low-income residents at the Ethiopian Community Center, a square, one-story building with a playground and large parking lot. But the going hasn't been easy, despite signs of interest from city and other political leaders.

A proposal from City Councilmember Kshama Sawant to put more than $4 million into the project received two hearings from the City Council but not the kind of money she sought. And an effort to put state funding into helping get the project going has been tied up political wrangling around the state's stalled capital construction budget.

The stresses of gentrification and housing affordability are not readily apparent. The Ethiopian Community Center sits a block from a church with signs in English and Amharic. And on either side of Rainier Avenue in south Seattle, immigrant-owned grocery stores, restaurants and shops display signs in Amharic.

The nonprofit Ethiopian Community in Seattle aims to build a housing complex of about 120 units for low-income seniors and families. It would be situated on what’s now the parking lot of the present community center, itself a property the community came together to buy in 2010.

“It feels bad when your kids want to play by Lake Washington [near Rainier Beach] or play in the parks but they can’t do so because the family lives away from here — that really hurts,” Abdi says. “Gentrification is real — it’s not something theoretical.”

With the first generation of Ethiopian immigrants in Seattle nearing retirement age, the project is intended to help the seniors, by providing living spaces for them in the upper levels of an expanded, multi-story complex.

According to Abdi, the project is necessary for Ethiopians to stay in Seattle.

The Community Center is designed to be a gathering space, and it serves hundreds of community members, according to Abdi. There’s a computer lab where new immigrants can learn computer skills, a room where kids can get after-school tutoring, a cafe, meeting rooms and more. Inside, it’s decorated with paintings, photos and maps reflecting Ethiopian culture and history, and it’s packed with informational brochures, fliers and posters.

In 2010, the year the community built the center, the Ethiopian population in Seattle was between 25,000 and 40,000 — one of the largest such communities in North America. The Ethiopian presence in Seattle dates back to the 1970s, a period when thousands of people left Ethiopia for all corners of the world, fleeing murderous and oppressive regimes, war and drought. Political turmoil continued in the ’90s, and with it the migration of Ethiopians to places like Seattle.

When Ethiopians first settled here, Abdi says, they chose the Central District, Yesler Terrace and other places close to downtown. But, as he explains, “Today, most of those people and most of those neighbors are gone, because of the high cost of living. They were pushed back south to where we are today, Rainier Valley.” And now, community members are being pushed further south still.

One morning this spring, a few dozen Ethiopian community members came to the City Council chamber carrying signs with the green, yellow and red of the Ethiopian flag, asking the city for help in funding the housing project. There were first-generation immigrants and their children, and some elders testified using limited English.

“Ethiopians have lived in this area for many years, and have always been self-sufficient,” said Ezra Teshome, a businessman and longtime Ethiopian community leader, during public comment. “But now the time has come for the city to really provide the support and help because they can’t find housing in the Seattle area. Families are being separated. … This funding is critical.”

The community members were pushing for a budget amendment from Sawant, which ultimately failed to pass, picking up only one second from Councilmember Bruce Harrell, who represents Council District 2 and Rainier Beach. Sawant’s proposed amendment would have called for an end to the city’s sweeps of homeless encampments, and to divert the money that would have been used for sweeps throughout various city departments — an estimated $4.3 million — toward the Ethiopian community’s affordable housing project.

Liya Rubio, program coordinator for the Ethiopian Community in Seattle, told the Council that it’s painful to see elders coming to the community center and asking for housing. About the only solution that can be offered now is to suggest that people put their names in for federal housing assistance, which entails a lengthy and uncertain wait.

Another man testified, “It wasn’t long ago when I lived in a housing project and lived in my car for a year and a half hoping that one day I would make it successful.” Ethiopian Community Services helped support him, he said. He was able to earn two degrees, graduate from the UW, and now works as a technology consultant at Microsoft.

Though the project failed to secure the substantial $4.3 million sum, Abdi says the community is undeterred and will continue to work with the City in securing funding. The project was recently approved for $50,000 from the Office of Planning and Community Development, from its yearly budget of $200,000 set aside to assist similar community-driven projects in their preliminary design and development stages.

The whole project will cost $32 million at a rough estimate, Abdi says.

The biggest funding challenge, Abdi says, will be the ground floor, which will cost $5 to $6 million. This floor will function as a community center, with the upper levels providing housing. While the city Office of Housing will likely be able to find ways to help fund the residential units, it can’t release any funding until the project demonstrates a viable source of funding for the first floor.

Another possible source of seed money will depend on whatever comes out of the state’s tangled capital budget negotiations, currently stalled by a dispute over well building in rural areas. State Sen. Rebecca Saldaña, who represents Rainier Beach and much of south Seattle, has proposed $400,000 for the project in the budget. Abdi says his fingers are crossed that negotiations will allocate it toward the project.

“I believe that the best way to address displacement is making sure that the community are controlling and shaping the development,” Saldaña says of the proposed state funding. “One thing that’s really remarkable about the Ethiopian community in Seattle is they haven’t gotten many handouts in the past ... They’ve already made significant investments over the last 20, 30 years, and not only to better their community and to build thing their community needs, but also being a real contributor to the broader community as well.”

For Abdi, the success of the project depends on the community stepping forward.

“I strongly believe government by itself cannot be a solution,” he says. “We need to work harder to make sure people can live wherever they want to live.”