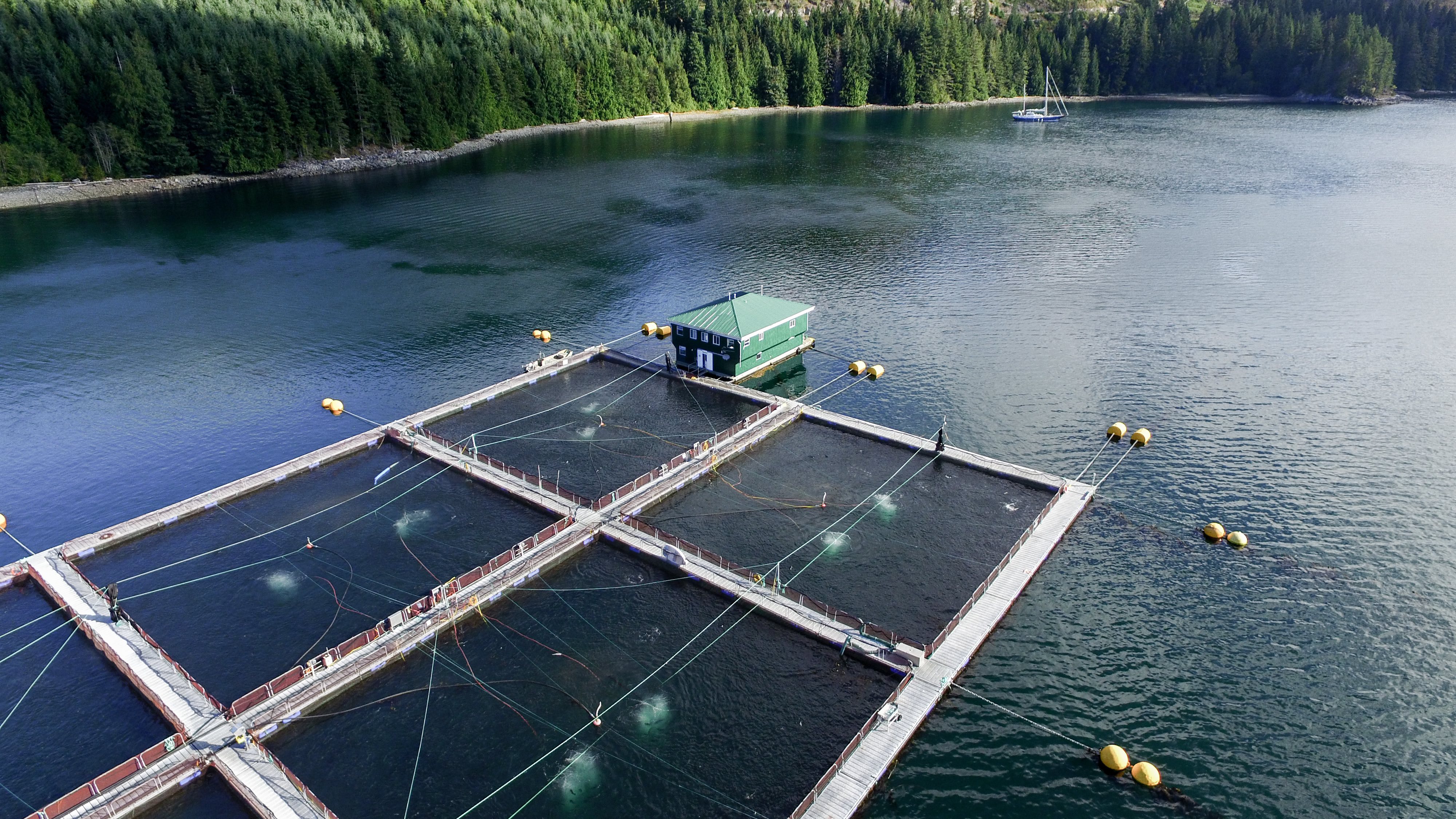 The Venture Point fish farm in British Columbia. A recent escape in the San Juan Islands has raised new concerns about aquaculture on both sides of the U.S.-Canadian border.

The company that owns the pen, Cooke Aquaculture, says it is unsure exactly how many Atlantic salmon escaped. Cooke and the Washington Department of Fish and Wildlife have been inventorying fish that are still inside the pens.

The company initially sought to blame the eclipse and high tides for the pen's failure, but tidal currents were not abnormally high when the pen broke apart. In fact, Cypress Island has seen higher tides every month this year.

Penalties for the company are still being figured out.

The escape raised concerns for environmentalists worried about pollution and diseases from the farmed fish. The Lummi Nation Indian tribe declared a state of emergency out of concern for endangered salmon spawning grounds.

State officials asked fishers to catch as many Atlantic salmon as they could, with no catch or size limits. Boats trolled the area, hauling in fish they hoped to sell to local markets.

The whole thing has been described as a “circus,” with the net pen structure looking like “hurricane debris.”

The situation has raised a few basic questions about Atlantic salmon and fish farming in the Northwest.

Why are Atlantic salmon raised here?

Atlantic salmon are not native to the Pacific Northwest. For years, they have been bred to become easier to farm — they’re more “highly domesticated,” according to the Washington Department of Fish and Wildlife. Most commercial fish farms raise Atlantic salmon.

The WDFW said Atlantic salmon is a “favored species” to farm in cold marine waters because it grows quickly and consistently, is resistant to disease, and is something people like to eat. Farmed Atlantic salmon are more docile than wild fish.

What used to cost several dollars per pound to grow, worldwide, now costs around $1.25, Rush said. That makes for higher profits.

In the U.S., Washington state and Maine are the two largest Atlantic salmon producing states — but that’s small beans compared to salmon farms in British Columbia, and especially those in Norway and Chile.

Now, most Atlantic salmon is farmed — less than 1 percent comes from the wild.

How long have Atlantic salmon been in Northwest waters?

No wild Atlantic salmon returned from any of the releases. Attempts to establish wild runs — outside of the Atlantic Ocean — have failed across the U.S.

Research into the use of net pens in Puget Sound and elsewhere started in the 1960s and '70s. At first, much of the research was focused on helping out wild salmon runs on the East Coast. When those efforts worked out, a commercial industry started popping up.

The first commercial net pens in the Northwest raised Pacific salmon. But because Atlantic salmon have been bred with traits that make them suitable for aquaculture, most commercial net-pen operators now choose to farm that species.

What are net pens?

The net pen that broke in Washington’s Skagit County was a commercial facility.

How many net pens are in Washington and where are they located?

There are eight Atlantic salmon net pens in Washington. There are three commercial pens south of Bainbridge Island, one near Hope Island, three off Cypress Island, and one in the Port Angeles Harbor.

What's the market for Atlantic salmon farmed in Washington waters?

Historically, salmon farming has been a small part of the entire aquaculture industry. A 2001 report by NOAA Fisheries says farmed salmon help meet people’s growing appetite for seafood — farmed and wild salmon are both, well, salmon.

Salmon are also well-known as a healthy choice on menus — fish has been documented to provide nutrients like Omega-3 fatty acids.

Atlantic salmon are available year-round, unlike wild-caught fish. And they’re cheap to produce.

But there’s an interesting kink in the salmon farming market: the farm-to-table movement. It’s a growing trend, especially in larger markets, to promote wild-caught fish. Advocates say it’s better for the environment and better for fish health.

Rush said, while the farm-to-table movement is gaining steam, it could have the effect of driving out cheaper options — pricing out lower-income consumers.

He said aquaculture should be considered as a farming option as the world’s population grows.

“It’s going to be important to take a look at food production systems, including aquaculture side-by-side with agriculture, and look at where the resiliencies to climate or exploitations to water and land occur,” Rush said.

Others worry about the health impacts of eating farmed salmon, which are treated with vaccines.

What are some of the biggest concerns with this release?

Warren said there isn’t any evidence so far that Atlantic salmon have spawned or crossbred with other salmon species.

Atlantic salmon are actually more closely related to brown trout than Pacific salmon. That’s why they don’t breed with Pacific salmon — even when researchers have tried to force it in the lab, Rush said.

So far, no Atlantic salmon have established themselves in Pacific Northwest waters, said Ray Hilborn, a professor with the University of Washington’s School of Aquatic and Fishery Sciences.

“This event is not that unique and so far no Atlantic salmon escapes have established self-sustaining populations or caused known damage to wild stocks,” Hilborn wrote in an email. “This isn't to say it is not a concern, nor that we shouldn't carefully consider whether we want salmon aquaculture in this region, but to call this a disaster is a stretch.”

Kurt Beardslee, the director of the Wild Fish Conservancy Northwest, said he is concerned about the environmental effects of this release — and of net pens in general.

“The Atlantic salmon bring with them pollution, virus and parasite amplification, and all that harms Pacific salmon and our waters,” Beardslee said.

According to a NOAA Fisheries report, escaped farmed salmon that carry diseases have a relatively low risk of spreading them to wild fish. Mainly because: pathogens are already present in the water, escapees likely won’t be infectious enough to dose healthy wild populations, and escaped fish aren’t very fit -- they often are quickly eaten by predators.

This event is an example of issues with net pens — and should be a wake up call, Beardslee said.

Beardslee said every day net pens are polluting, which to him is a major worry.

“It’s basically a feedlot of salmon that are in a very contained area. They’re all feeding at extremely high rates so they can raise them to adulthood quickly,” Beardslee said. “They’re producing lots of waste materials, and that waste is pollution.”