How the 3rd-place finisher changed the mayor's race 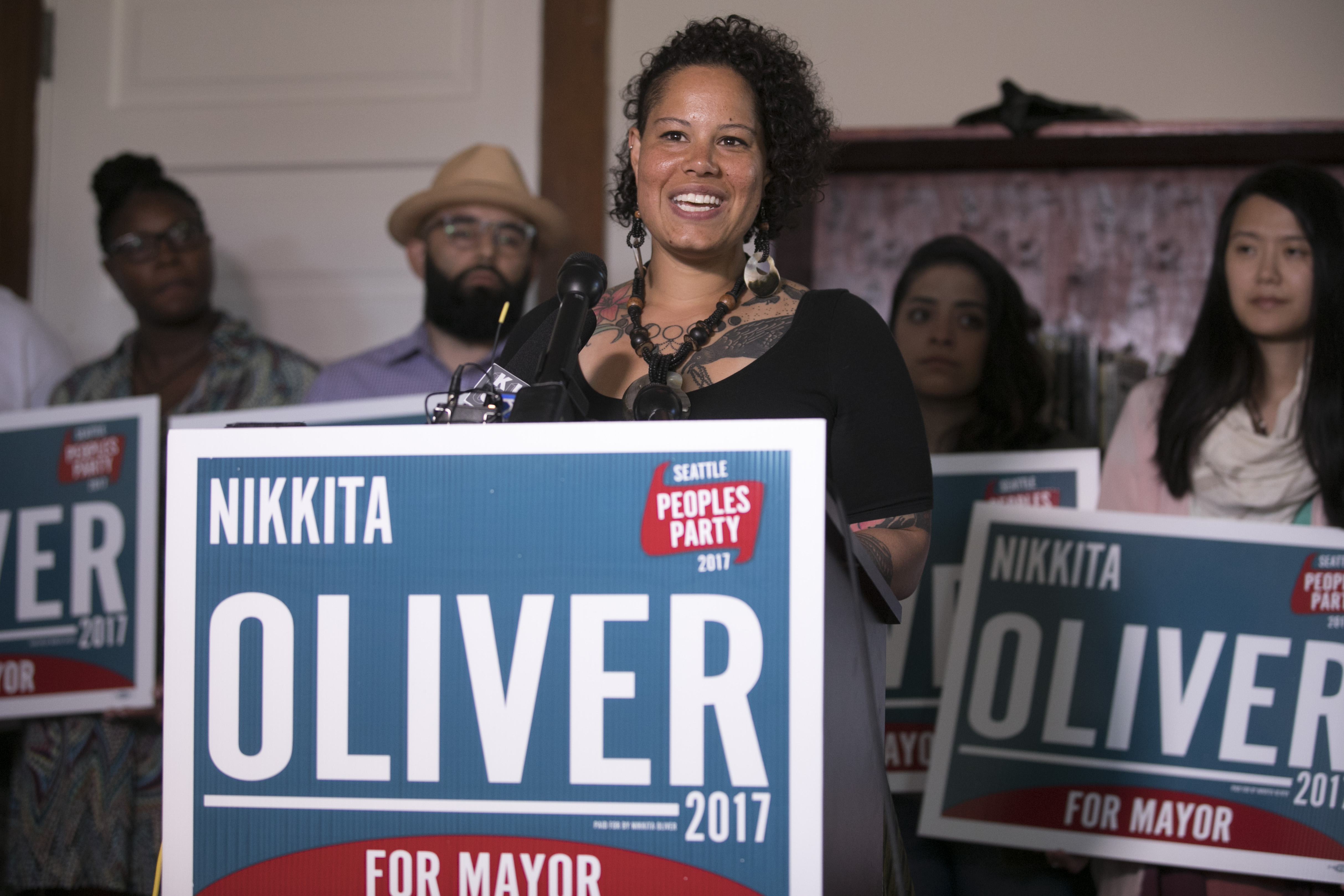 Nikkita Oliver holds a press conference Tuesday afternoon at Washington Hall in Seattle, where she first launched her campaign for Seattle mayor. The Seattle Peoples Party candidate came in third in the primary election, behind Jenny Durkan and Cary Moon, and will not advance to the Nov. 7 general election.

Attorney Nikkita Oliver’s campaign for mayor began quietly last winter, developing out of low-key meetings in the wood-floor backroom of the Central District’s 109-year-old Washington Hall. Spurred by the angst following Donald Trump’s election, activists hashed out what they could do locally. But as her candidacy went public, the enthusiasm, particularly among young people and people of color, was more energetic and noisy than quiet, beginning with an over-capacity crowd for her kickoff and ballooning all the way to an election-night party that more closely resembled a concert.

Oliver's campaign ended Tuesday, as King County Elections certified the election results for Seattle's mayoral primary. Although it was clear last week that the Nov. 7 general election would be between urban planner Cary Moon and former U.S. Attorney Jenny Durkan, it is now official.

The enthusiasm, it turned out, fell just 1,170 votes short of pushing Oliver to the next round.

Turning to the general election, Oliver pledged that both she and her Seattle Peoples Party would be a continuing presence, hosting community listening sessions and hosting a mayoral forum. She did not endorse Moon, viewed by some as the more likely heir apparent to Oliver's voters, saying neither candidate had yet shown that their actions matched their words. "Some candidates were able to spend $90,000 of their own wealth while talking about income inequality as their way of running the race and yet have no ground game, no real community relationships," she said, a reference to Moon. "If I regret anything, it's not calling that out sooner."

And while Oliver herself acknowledged the law does not allow her to run as write-in after losing the primary, she did not rule out that someone from the Peoples Party could launch a write-in mayoral campaign. Her party's vision, she said, was of "a Seattle where wealthy and white folks are not simply willing to put the ideas of people of color and low-income people at the forefront, but they get out of the way and allow us to be the ones to take the lead toward liberation. This is the Seattle we're working toward."

During her campaign, Oliver built an astonishing presence on social media, amplified by celebrities like Shaun King, Macklemore, Sarah Silverman and Michael Bennett. She spurred organic viral hashtags — #NikkitaBecause and #NobodybutNikkita. And in her wake, she leaves the Peoples Party, which seems likely to carry forward into future elections, even though Oliver's loss leaves it without its own candidate this year, at least for the moment.

In the campaign leading up to the Aug. 1 vote, Oliver was trying to upend expectations for a summer primary, which historically leans heavily toward richer, older, whiter voters, very few of whom were ever going to cast their ballots for a young, mixed-race, queer renter (Oliver listed her net worth as zero on her financial disclosure form). As analyst Ben Anderstone recently pointed out, changing the voting demographics of an election is a tall order. That Oliver did as well as she did is impressive in its own right.

To her supporters, it's a sign of her strengths now and, at just age 31, the future.

“She’s such a uniquely brilliant and caring person,” said King County Councilmember Larry Gossett, who was an early supporter of hers. “Her commitment to grassroots organizing and the mass of working class and low-income people is really genuine in her.”

“She reminds me of me: her genuine commitment to African-American liberation.”

“I’ve seen her care for the community for a really long time," Mira Kraft, 27, said at her election night campaign party. "She has the best interest of Seattle in her heart and the ability to bring that to fruition." 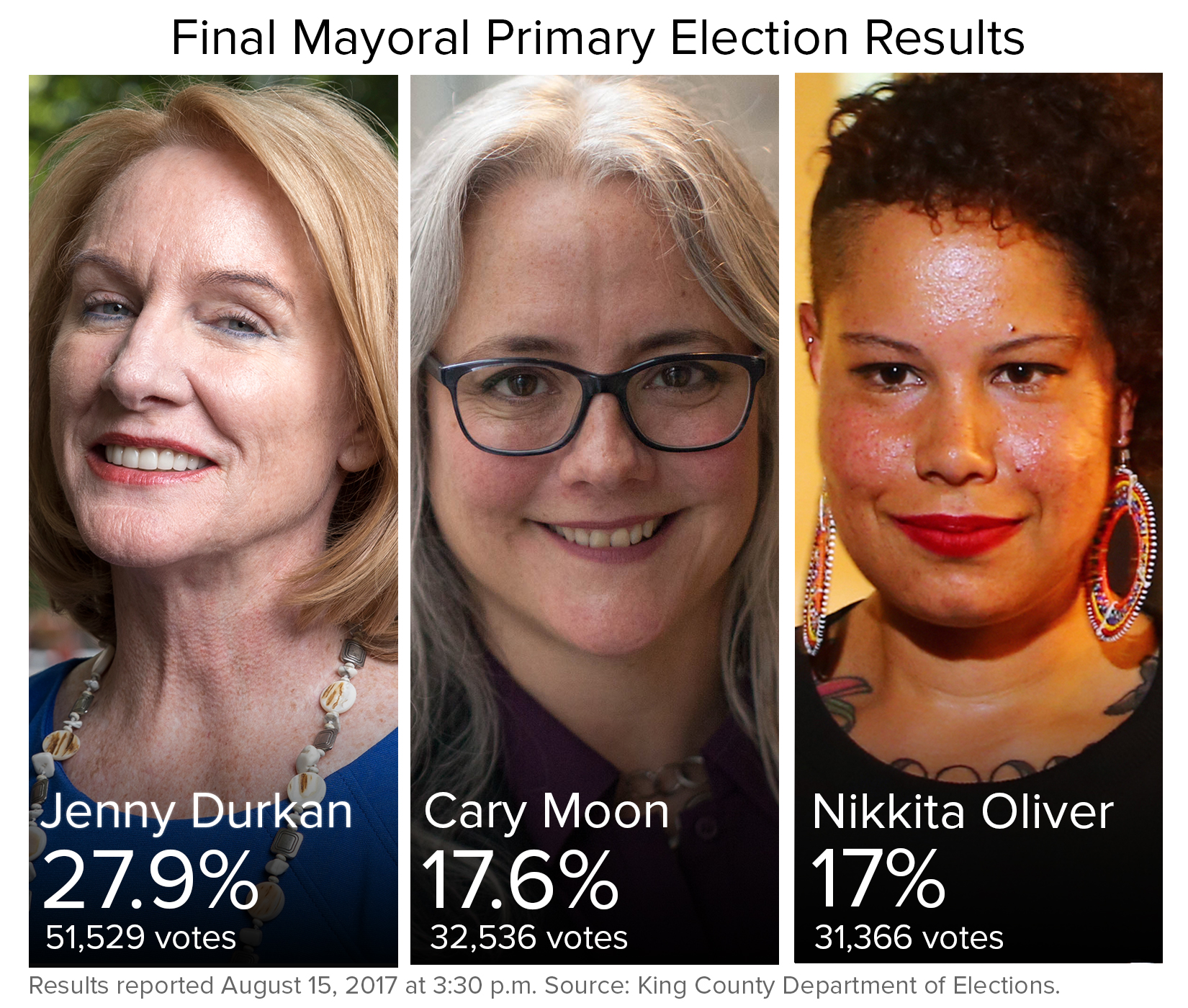 Despite Oliver's defeat, her presence will hang over the coming general election. The Meaning of Nikkita Oliver drove the conversation at a forum last week on race in the mayoral primary sponsored by the South Seattle Emerald. Even with Cary Moon in the audience, who bested Oliver by less than 1 percentage point, it felt at times like Oliver had in fact won.

“I've never had so many conversations about race with so many white people,” said Michael Charles, campaign manager for Bob Hasegawa in the Japanese-American lawmaker's bid for mayor. As a result of Oliver’s campaign, as well as Hasegawa’s, he said, “I think a lot of people had to check their privilege.”

At the forum, the marching orders for Moon were clear: Bridge the gap to Oliver’s people. “This coalition between Cary and Nikkita’s people could be powerful,” said city council candidate Hisam Goueli, who was eliminated in the primary.

But it’s not a given. As was on display Tuesday, there's a skepticism that Moon, wealthy and white, can capture an iota of the spirit generated by Oliver.

Moon, however, will have to win backing from many who wanted Oliver if she hopes to compete: Her opponent, Durkan — who is also wealthy and white — beat the rest of the field by more than 10 percentage points. Durkan's campaign is powered by more than a half million dollars, if you include independent expenditures. And she’s swept up the endorsements of business, labor and national, mainstream Democrats.

In a statement Tuesday — marking the first time she spoke openly about moving on to the general election — Moon seemed to acknowledge her need for Oliver's voters. "The Peoples Party and Nikkita Oliver's campaign amplified the voices of those who often feel Seattle is no longer for them, and engaged thousands across Seattle in this important election," it read. "Our city is stronger for their work. I am inspired to hear the Peoples Party will continue to grow in power and engage in local politics."

Narrative strands for the November race have already begun to emerge along lines that could engage Oliver's supporters: establishment vs. outsider; experience vs. newcomer; pragmatism vs. radical change.

In the months leading up to the election, Moon has not hesitated to jab at Durkan, although often without mentioning her by name. After Durkan won the endorsement from the Seattle Metropolitan Chamber of Commerce, Moon released a statement of her own, celebrating that she’d been turned down. In a June candidate forum, Moon said, "It’s not OK anymore to be socially progressive, but economically centrist,” a clear reference to Durkan. “We see where that leads." And on election night, she spoke of her willingness to work with the Peoples Party if Oliver won the primary.

Durkan and her supporters, on the other hand, will pitch her as a progressive, but one who is able to bring together disparate groups, like labor and business. Like much of Durkan’s message, it will likely be the most closely mirrored continuation of departing Mayor Ed Murray’s, who was proud of his ability to set the table for both the SEIU’s David Rolf and the Chamber’s Maud Daudon.

The Peoples Party will live on. Oliver said they will work to support the initiative to change policing practices in Washington State, I-940, and to combat I-200, which forbade affirmative action policies in the state. They will also continue to hold community listening posts during the campaign and hold a party assembly this fall. And, she said, the party will host a mayoral forum during the campaign between Durkan and Moon — with Oliver as moderator.

As for future elections, she said they "will absolutely be running future candidates." Could that be Oliver again?

"That will be up to the party's structure."