How the Vietnam War shaped a Seattle protest generation 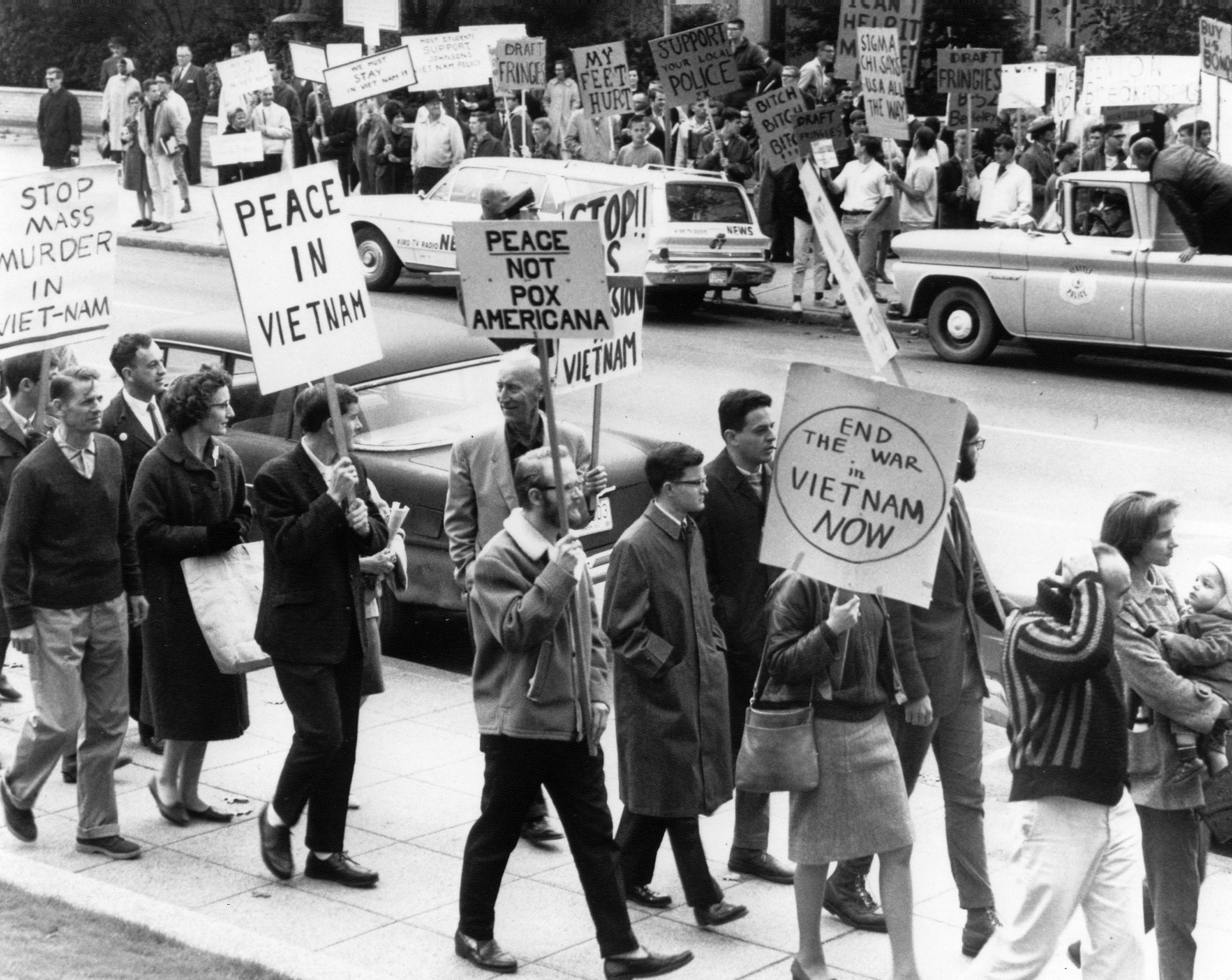 Demonstrators in foreground protest the war in Vietnam while those in the background protest against the anti-war protesters in Seattle, Oct. 16, 1965.

The closest I ever got to Vietnam was a squat unremarkable building in Interbay on 15th Avenue West, just north of what is now a Whole Foods. During the Vietnam War, the building was the Armed Forces Examining and Induction Center, where young Seattle draftees were rounded up for their pre-induction Army physicals. It was the last hope of reluctant soldiers-to-be, and the first official stop for the local boys on their way to war.

Seattle is over 7,000 miles away from Vietnam, but the war was here. Or rather, the huge social upheaval about whether it was a war worth fighting rocked the nation, including our part of it. And for many in my generation, including those who fought and those who refused, it was a defining moment, one many of us quickly tucked away as being part of a painful past.

My long dormant Vietnam-era emotions were tapped this summer when I previewed the new Ken Burns & Lynn Novick documentary series, “The Vietnam War.” It is 18 hours of history that, at times, feels like reliving the Vietnam era in real time. Unlike previous Burns efforts, there are no weepy fiddle tunes or Lost Cause nostalgia. Historians take a backseat too. This series captures an era within living memory with eyewitnesses from all sides — from Viet Cong to POW’s, from soldiers to protesters — to tell their stories. The imagery features TV broadcasts and uncensored photographs of dead babies. The audio includes tapes of high officials conspiring to lie to the American people. The musical soundtrack is rock ‘n roll: Hendrix with helicopter gunships.

If you want to understand the times during which the baby boomers came of age, this will fill in the picture of violence, rebellion, racism, idealism, radicalism and heroism of a fractured nation. For those of us who lived through the Vietnam era, the documentary series delivers a sequence of emotional gut-punches. It brought back so many of the intense emotions of the time.

In 1972 I was 18 and a member of the last class of American men drafted to serve in Vietnam. When I visited the Interbay Induction Center 45 years ago this summer, I had just graduated from high school, had drawn a low, certain-to-be drafted lottery number and had been classified by the Selective Service as a 1-A, meaning, “good to go.”

I had applied for Conscientious Objector status. I opposed the war — all wars — and the draft itself. My request for CO status had been rejected. While I appealed that decision I was called to be inspected for fitness by the Army. We young men were herded in our underwear through a battery of tests. The military staff seemed to alternate between bored and sneering. When a medical aide put his hand under my genitalia and instructed me to “turn your head and cough,” I probably wasn’t the only potential inductee hoping for a hernia.

At the end of a phalanx of tests, an Army doctor pretended, for just a moment, that I had perhaps failed my eye test, then lowered his clipboard with a smirk and informed me I’d passed with flying colors. He seemed pleased that another bushy-haired hippie was going to be cannon fodder in the jungle.

Not until watching this series did I realize how much Vietnam had shaped key elements of my life. It helped form my politics — I was attending anti-war marches from age 14 onward, including the Moratorium, the protests in the wake of the murders of students at Kent State and Jackson State, and the “incursion” into Cambodia. I volunteered for George McGovern’s 1972 anti-war presidential campaign against Richard Nixon.

The war shaped my education: I chose my college, Evergreen in Olympia, in part because I was advised that my appeal for reconsideration of the rejection of my CO status early in the fall of my freshman year would likely fare better in front of a Seattle draft board rather than one in rural Ohio where my first-choice college, Antioch, was. The stakes felt high. I had decided to go to jail instead of Vietnam or Canada.

The war forced me to take a moral stand at an early age, one at odds with public opinion. I won my CO appeal but not before I was told that if my wish was granted, I would be a marked man for the rest of my life. In the Vietnam era, there were more than 170,000 men marked with the supposed scarlet letters “CO,” fewer than half of those who applied. Some 648,000 draftees were sent to Vietnam out of 2.7 million uniformed Americans that served there.

The war fractured my relationship with my father, a WWII veteran, who called me a coward. Though he later testified on my behalf at my successful CO appeal, the wounds over our differences on the war took years to fully heal.

Vietnam also shaped my journalism career. As a college newspaper editor and radio newsreader at Evergreen, I was steeped in the Watergate scandal that unfolded from 1972-74. Watergate was deeply connected to Vietnam. It grew out of Nixon’s paranoia over the Pentagon Papers, government documents leaked to the New York Times that showed the government knew all along that there would be no victory in Vietnam. Nixon formed his infamous clandestine burglary unit, the “Plumbers,” to get dirt of leaker Daniel Ellsberg and also to recover a report on Nixon’s personal meddling in Vietnam peace talks during his run for president in 1968, an act Lyndon Johnson described as “treason.”

Later, I had an entirely different experience when my first wife and I took in a Vietnamese refugee family. We had registered with a Catholic services agency to provide emergency help for Vietnamese refugees. One day the phone rang asking us if we could take in a single mother, her baby boy and young daughter. “When?” we asked. “Now,” was the reply.

We found them at the end of a driveway in a cul-de-sac somewhere south of the city. Sitting on a suitcase, they had been kicked out of the mother’s sister’s house. They waited for us in hand-me-down clothes with all their worldly possessions.

The mom had been a civil servant in the Census Bureau of the South Vietnamese government. She was well-educated and spoke French and English fluently. She did not know where her husband was; her father, a high-ranking official, was dead.

She had to navigate the welfare system, look for work, struggle to start over. When I imagined their losses, I thought if it had been me that I would have crumbled long ago. I was put tangibly in touch with the personal devastation of that war on the people we were supposed to help, and truly humbled by their resilience.

The war came to a sudden end for me. In 1972, with an election looming and 18-year-olds voting for the first time, Nixon announced an end to the draft. I received my CO designation but was never called to alternative service. The draft and American military action ceased in January of 1973. The war I had marched against fell into the background. Most of us moved on.

I was certain war was wrong, but never begrudged people who fought in it — or who refused to. I haven’t let anyone’s dodging Vietnam combat make me feel negative about them, not Bill Clinton, Dick Cheney or Donald Trump. What did and does seem wrong to me are people who never took a public stand for or against the war. Watching Burns’ series, I felt grief that I — we — did not do more to stop the war sooner.

For those who think America is in an unprecedented time of violence and division, “The Vietnam War” will be a sobering reminder that we’ve been here before and that things have been and can get, much worse. It was a crisis for our country, and millions of Vietnamese died as did nearly 60,000 Americans. We came through it, but not unscathed.