Hey hey, ho ho, has that Lenin statue got to go? 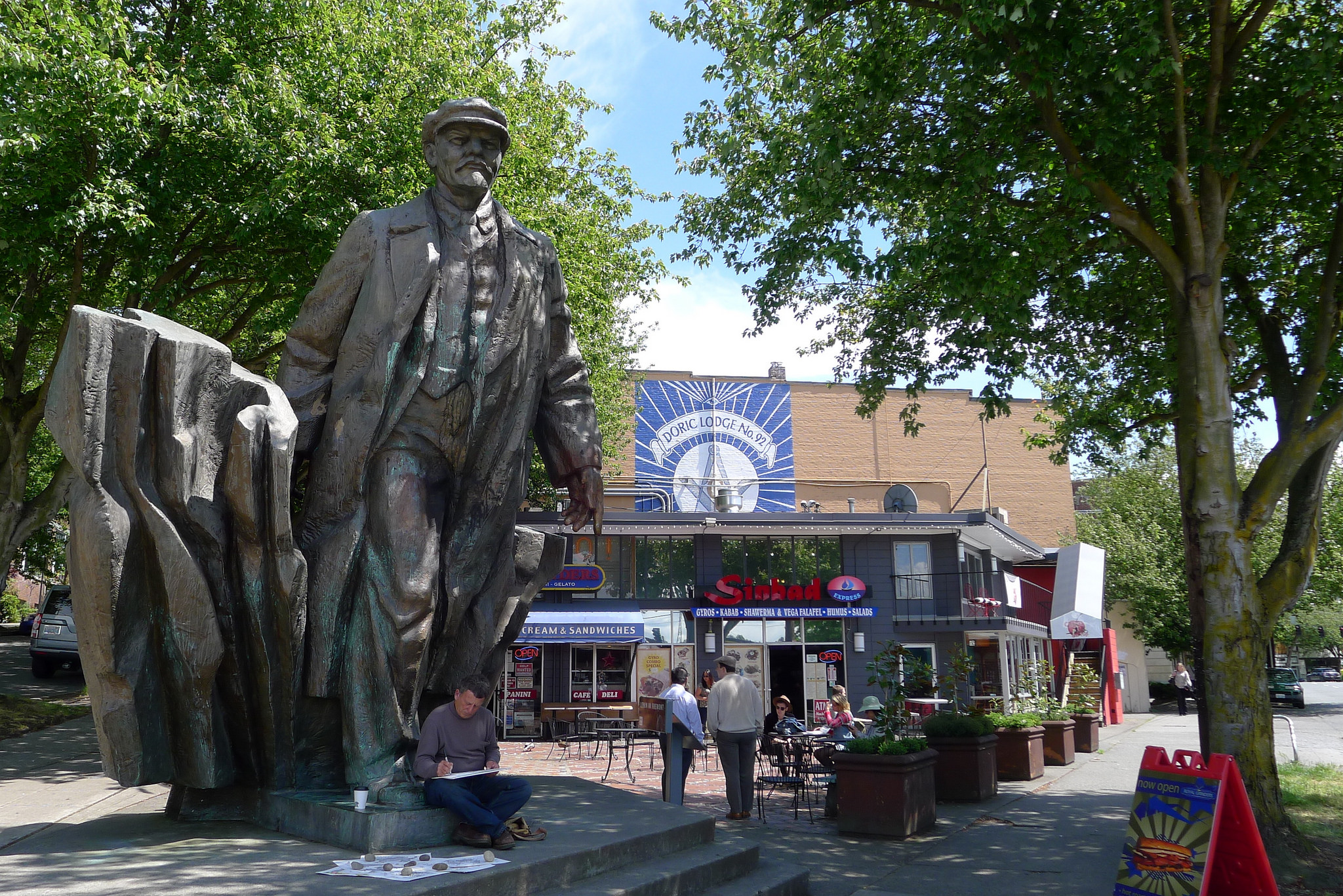 The Statue of Lenin in Seattle is a 16-foot bronze sculpture of Communist revolutionary Vladimir Lenin, that was completed in 1988 and has lived in Seattle's Fremont neighborhood since 1995.

In the wake of Charlottesville and President Donald Trump's coddling of white supremacists, there is renewed controversy over Fremont’s second worst piece of public art — not the Troll but the Vladimir Lenin statue, of which I am not a fan.

I understand its ironic intent, or how some see it as a Cold War trophy now in an ignominious retirement, but, as I wrote six years ago, I can't help but think of his murderous repressions that left millions dead. I would be happy to see it melted down for some useful purpose — like to make more LimeBikes. (Footnote: One of my ancestors was a historical revisionist who melted down a statue of King George III to make bullets for the Continental Army.)

As it happens, I am writing this from the former Soviet Union state of Kazakhstan, which before the Russian revolution was a Russian colony where fights between empire and indigenous peoples took place. It also has a long history as a land of conflict involving Gengis Khan, Atilla the Hun and Tamerlane, among others. Invasions, massacres and ethnic conflict are nothing new. The Soviet era was relatively brief, but it left its mark — even before Joseph Stalin imprisoned millions, Lenin put tens of thousands into the first modern concentration camps and let at least 3 million people die in famines. The main language is Russian, and many Kazakhstanis are of Russian descent.

Kazakhstan also has a long history as a place where Russians were exiled — in the pre-Soviet era, Dostoyevsky spent five years imprisoned here gazing out at the barren steppe. Today, the Soviet Union isn’t enshrined in statues of Lenin but a tourist guide offers tours of a former camp for women, the wives of supposed traitors, banished into the Soviet gulag. The tour promises the “excursion will leave you with an indelible mark on your memory … about life of the people repressed in the Soviet period.”

In other words, Fremont’s joke is probably not so funny to those who suffered under the Soviet yoke. Still, unlike Mayor Ed Murray, I wouldn’t ask for Lenin to be taken down simply because it’s offensive. If I tried to eliminate everything from Seattle that offended me as a citizen and as a person who writes about Northwest heritage, well, I’d be a very busy man and nuttier than Kim Jong Un.

Charlottesville has also reignited outrage against our own Daughters of the Confederacy monument at the historic Lake View Cemetery on Capitol Hill. The Northwest is rife with homages to the Confederacy and those who aided and abetted it. We have taken care of some problems — such as the re-designation of King County from Southern slaveholder William Rufus DeVane King to Martin Luther King Jr. But other tributes remain.

In the 1920s, the Daughters of the Confederacy were busy restoring the “honor” of their fathers in markers all over the country, right in time for the KKK revival, a parallel effort to mainstream and rehabilitate Southern “nobility” and the “Lost Cause.” The Lake View monument reflects that era.

On the other hand, private markers on private land, especially memorials in cemeteries, are problematic from a tear-down standpoint. One could argue, in fact, that the best place for any Confederate monument is a graveyard.

I have two ideas on this score. One, instead of defacing or removing the Lake View memorial, outrage could perhaps be channeled into preserving and tending to the Grand Army of the Republic burial ground for Union vets right next door. These men, imperfect as all humans are, nevertheless fought to end slavery, not to preserve it.

My second idea is more personal. I would like to be buried in Lake View — this is where my immigrant grandparents are buried, not to mention many locals of all stripes, from Doc Maynard to Denise Levertov, from Bruce and Brandon Lee to Walt Crowley. If the cemetery real estate has not gone up as fast as most Seattle land, I could do this: I could get a plot near the memorial and have my marker engraved with an arrow pointing to it and saying, “Fuck these guys.”

OK, it’s late at night in Kazakhstan and I’ve been drinking vodka. But at the moment, I’m thinking actions like this might help solve the issue of tolerance for history feeling like complicity. Even in death, we should have the right to free speech, especially on our headstones.

If you are interested in this story, you might also be interested in some of Knute Berger's other coverage of the history of racism and Nazis in the Pacific Northwest:

How to deal with fascists — lessons from history, Jan. 13.