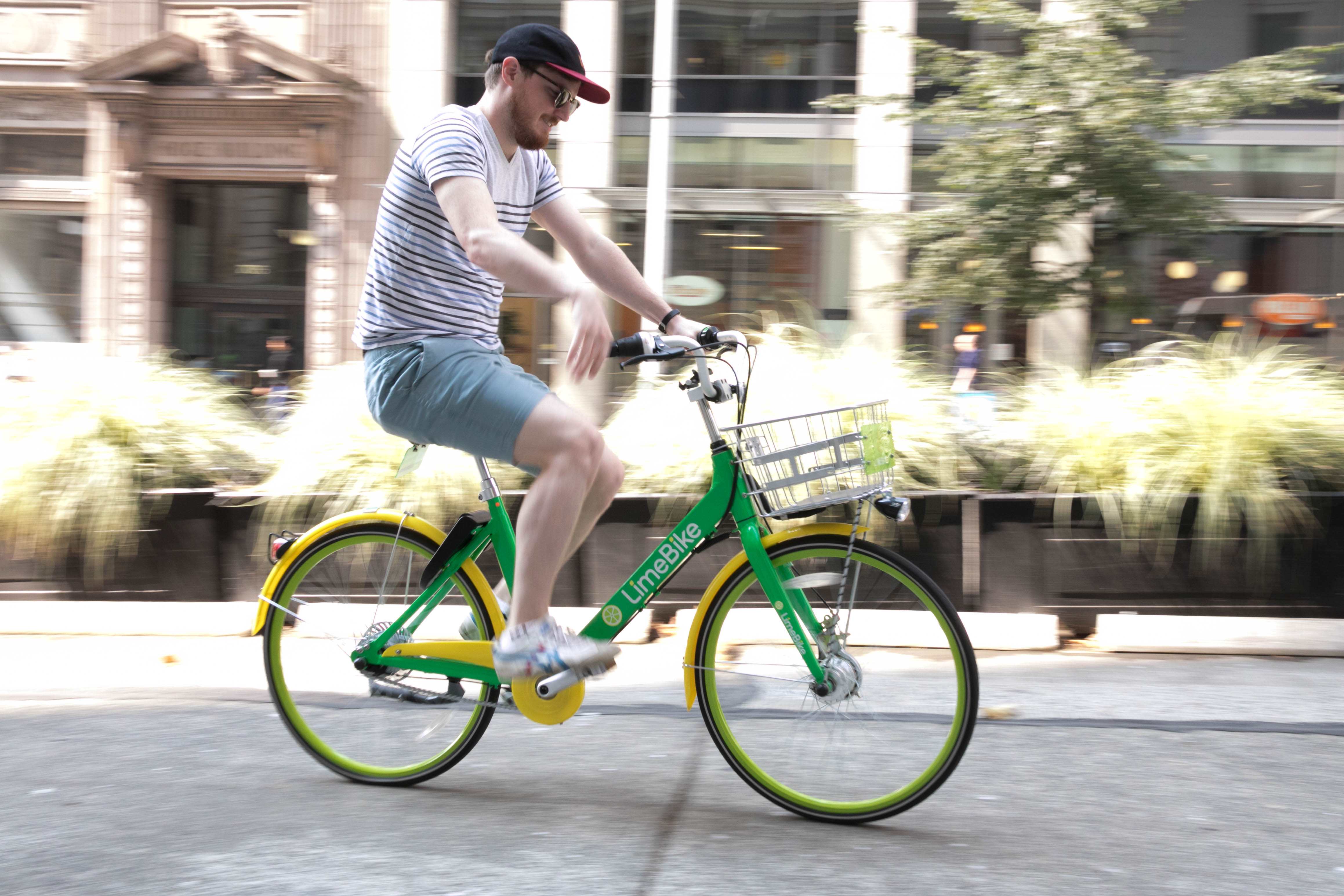 John Gagnon, visiting from Chicago, rides a LimeBike he's renting near Pioneer Square in Seattle on Tuesday, August 8. "We have these in Chicago but it's not as easy to use, there's stations where they need to be returned and sometimes the stations are full," Gagnon speaks of his frustration with the Chicago version much like the city of Seattle's previous rendition, Pronto bike share. (Photos by Matt M. McKnight/Crosscut)

The failure of Seattle’s first attempt at bike sharing was autopsied to infinity, a reflection of the bike community’s conviction that the city is, or could be, a biker's paradise. In the end, advocates came up with four main problems that explain Pronto’s demise.

With the introduction of two private bike-share systems — and soon to be four — one of those problems is solved, a second is in legal limbo, and a third remains to be seen. The fourth? That’s the hard one, and it gets to the question of whether Seattle is really serious about being a bike-friendly town.

Seattle woke up last month to find 1,000 green and orange cruiser bikes scattered across the city, apparently begging to be stolen. They weren’t, of course: Users register online, scan a code on the bike with their smartphone and, pop, the wheels are freed. You pay by the hour and leave the bike wherever’s convenient, just like car2go.

That number grew this week to 2,000, and according to the two companies behind these bikes, Spin and Limebike, the early returns have been good. Both Limebike Director of Strategic Partnerships Gabriel Scheer and Spin CEO Derrick Ko are vague with Seattle-specific numbers, but Scheer said, in Limebike’s first week, “we blew through Pronto’s best week, which felt great.”

Ko expressed similar sentiment. “By all metrics, we are doing extremely well,” he said.

The early success is validating for bike-share believers and gives credence to the idea that, given the right system, Seattle people will in fact ride public bicycles. But there’s still the matter of those four factors that torpedoed Pronto, more on those momentarily.

Here’s a video from our partners at KCTS 9 that explains more about how these companies work:

The most obvious change from Pronto to the Spin/Limebike model is the end of docking stations, the stalls where Pronto bikes had to be parked.

While docking stations can and have worked well in other cities, bike advocates argued Pronto’s were poorly placed and too sparse. Bike sharing is sold mostly as a way to connect other modes of transportation and to finish the last mile of a trip. But if stations are too distant from one another — or from your destination — that will not work. The new systems solve that problem by letting you leave the bike wherever you want.

As Spin’s Ko put it, it’s the difference between taking a bus and taking a taxi. Without the docking stations, “You really get to go to where you need to be at,” he said.

2. Helmets? You’re on your own

Another issue Pronto struggled with was the Seattle law that requires bicyclists to wear helmets. To address this, Pronto created a whole parallel helmet exchange in addition to its bike exchange. That created an additional burden for the financially challenged program. Some argued that the helmet requirement also discouraged ridership.

The two new bike-share programs do not provide helmets, putting them in a sort of legal grey area. “We want people to obey the law and respect the law, but it’s also individual users responsibility,” says Ko. He adds later, “If you rent a car, you don’t have to wear a seatbelt, but you really should.”

Scheer is a little more holistic about how to solve the safety question, arguing it’s infrastructure more than helmets that keeps people safe. While he says it’s smart to wear a helmet, the added riders will increase awareness and create more demand for safer routes, therefore making riding safer.

A statement from the Seattle Police Department leaves the door open for officer discretion when it comes to enforcing the law. “Our department enforces a number of road and traffic safety regulations, with an emphasis on education over enforcement,” a department spokesperson said in an email. “Officers always have the discretion to write a citation or explain the laws and importance of road safety and provide a warning.”

Then there’s Seattle’s famously dreary weather. Pronto rolled out during Seattle’s rainiest season, which made for a slow start, and critics said it never recovered. Spin and Limebike busted onto the scene in July, just as people are most likely to be out riding.

Ko says he’s not worried about what will happen come winter. “I think what we’ll see is some change in usage patterns,” he says. “I would expect there to be a lot fewer long-distance trips, but more shorter trips.”

Scheer is a little more glib. “I’m sure the numbers are going to drop,” he says. “I’m really glad we didn’t launch in November.” But he says their bikes are solid and have good brakes, which he believes will stand up to the wet weather.

4. Is Seattle really a bike town?

The final issue, and the biggest, is the city’s bicycle infrastructure. Seattle’s bike lanes are notoriously fragmented. Travel north on Second Avenue and the bike lane ends near Pike Place Market. On Mercer Avenue, the bike lane goes west from Dexter to Fifth, turns south and then spits riders onto the street. There are stretches of relative comfort, but when the lanes end, re-entry into traffic is treacherous.

The city has a plan, called the Bicycle Master Plan. The center city bike network is part of that — a web of planned bike paths spreading outward from downtown. But both have seen delays. For bikers, getting from A to B can be a headache.

Issue four? This one is a doozy.

Dockless bike-sharing systems are new in the United States and Seattle has become their guinea pig. Soon to join the Bay Area-based Spin and Limebike will be Beijing-based Ofo and Dallas-based Vbikes, according to the Seattle Times. As the first to city to see this new model, there have been some adjustments: Spin, for example, has needed to add lower gears for Seattle’s hills. And vandalism has been a bit of a problem.

“We want to hit all the neighborhoods. That’s when we’ll really see the impact.”