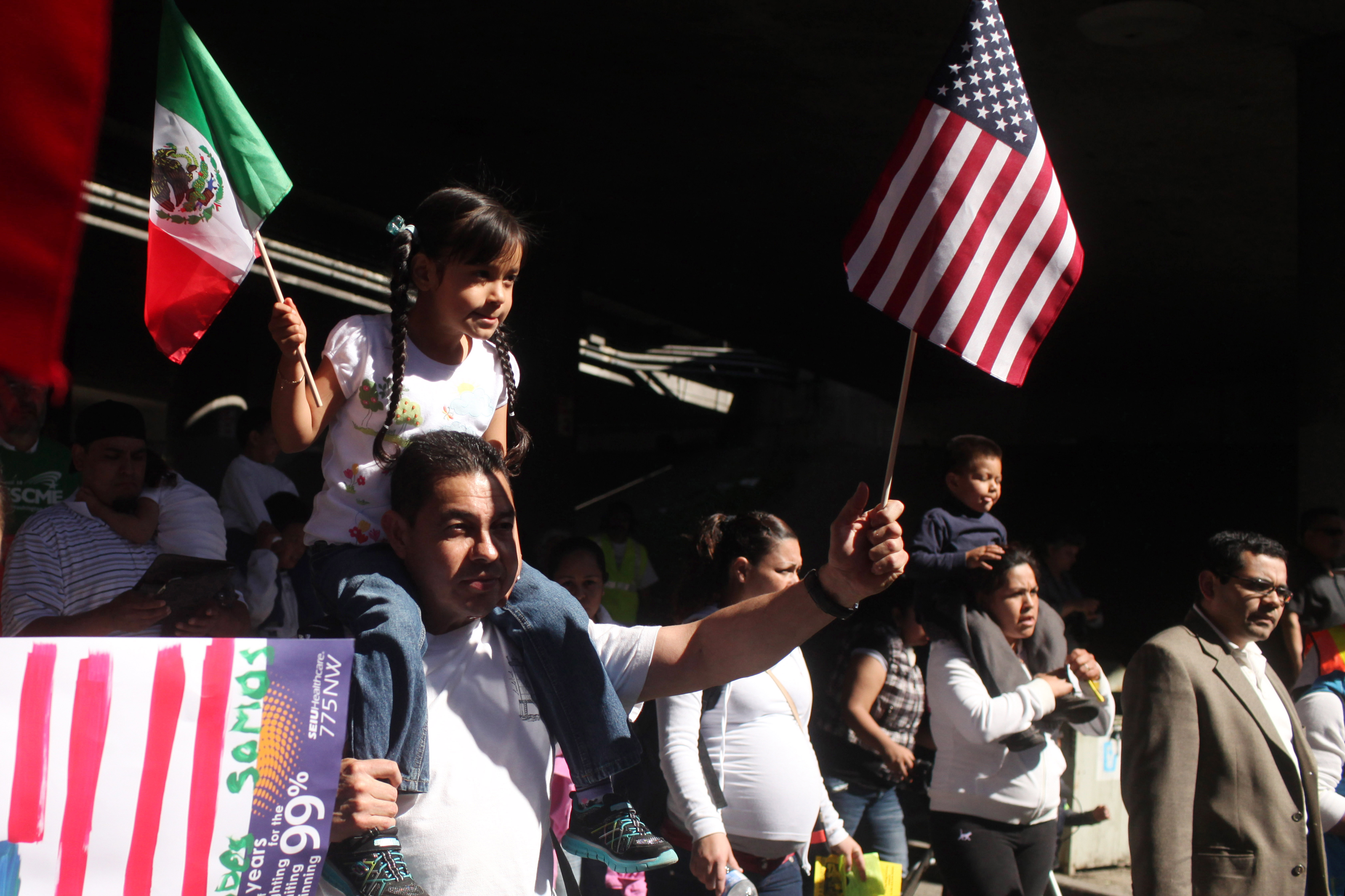 Protesters march along South Jackson Street through the International District during International Workers' Day demonstrations in Seattle, Washington on May 1, 2013.

Update: On Thursday, Sept. 14, a Superior Court judge ruled against putting Burien's sanctuary status on the November ballot. Earlier this year, Burien's City Council voted to include the city's sanctuary status on the ballot but a group, Burien Communities for Inclusion, filed a lawsuit to block that decision.  In August, a Superior Court judge in Spokane ruled against putting a similar measure on its November ballot.

There was the resident who was thrilled to live next door to not one, not two, but three members of mariachi bands. The longtime teacher who, in retirement, still fretted about the comfort and safety of the Latino children living close by, in the community.

And then there was Craig Keller, the man behind the group Respect Washington, which is leading a statewide effort to repeal the so-called sanctuary status of Spokane and Burien, a Seattle suburb that now tops 50,000 in population but has enough small-town feel that its library doubles as its city hall.

Late one evening last week, Keller stood behind a podium at Burien City Hall. While holding a newspaper in one hand, he spoke about what he called the numerous atrocities illegal immigrants have committed in the U.S. It was a strategy right out of President Donald Trump’s playbook.

The three-and-a-half hour City Council meeting became so heated at one point that police were forced to clear the room. In another instance, officers broke up what looked like the brink of a fist fight about America's newfound intolerance and whether to put a measure to roll back Burien's sanctuary status on the city's November ballot.

That would join Burien with Spokane, the state's second largest city, in holding popular votes on whether to undo policies meant to protect immigrants. Burien's City Council is scheduled to meet again today (August 7) to determine whether residents will vote on the city’s sanctuary status in November’s general election, as Keller and his supporters want.

The immigrant-rights battles brewing in the state are far from unique. Since the election of Trump, some have increasingly doubted the traditional role America plays: a country that accepts the poor and huddled masses. Just last week, Trump supported a plan that would greatly reduce legal immigration, on top of his temporary ban on travelers from some Muslim-majority countries and his limits on refugee entries. And, on Thursday, U.S. Attorney General Jeff Sessions again ratcheted up his attacks on sanctuary cities, sending out letters to several cities with high rates of gun violence warning they won't get help under one law enforcement assistance program unless they quickly drop sanctuary protections.

While critics complain that tax dollars are diverted toward helping people who immigrated without legal authorization, sanctuary cities are intended to facilitate cooperation between the police and undocumented immigrants. They ensure the undocumented have access to some city services. Some sanctuary cities "simply forbid local officials from inquiring into immigration status, while others may refuse to honor Immigration and Customs Enforcement detainers for criminals convicted of minor offenses," said Benjamin Gonzalez, a political science professor at Highline College in Des Moines. The point, say many experts and public officials in Washington cities, is that undocumented immigrants should feel safe enough to report crimes — without the fear of deportation.

In a narrow 4-to-3 vote this January, the Burien City Council passed an ordinance that instructed city employees not to inquire about a resident’s immigration status. The legislation also prohibits employees of the city from collecting information about a resident’s religious affiliation. Burien, according to the 2010 Census, is about 20 percent Latino.

In July, however, Respect Washington turned in a petition signed by 3,643 of residents, or the 15 percent of registered voters in the last city general election needed to repeal the ordinance. The group had initially come up short but filed for a 10-day extension. In the end, Respect Washington had five more signatures than the minimum required.

Much of the attention has focused on whether local police should act as, in effect, immigrant-watch agents for ICE. Burien's police service is contracted through the King County Sheriff’s Office and has its own longstanding policy not to ask about a resident’s citizenship status. According to Burien Police Department Captain Bryan Howard, that policy would not change even if the city’s sanctuary status is repealed. “That’s not our job. We enforce local laws,” Howard said, while noting that it is the federal government that enforces immigration laws.

“Burien’s ordinance did not change any of our practices in any way,” Howard said. “Our job is simple. When people call 911, we go.”

While Burien is still deciding on whether to hold a sanctuary cities vote in November, Spokane has already set a public vote on the repeal of the city's sanctuary protections. But six community organizations in Spokane are trying to head off the vote, challenging Respect Washington's ballot measure as legally flawed. The proposition going before voters, according to the lawsuit, “would amend the Spokane Municipal Code by removing prohibitions against law enforcement and other city employees inquiring into an individual’s citizen status.” The proposition would also remove the words “citizenship status” from the city's definition of “bias-based policing” actions. Finally, it would give any city employee the right to collect and share immigration information.

The Center for Justice is representing the Spokane community groups suing Respect Washington and it's arguing that police have other things to prioritize than to ask people about their immigration status. “Police across the country don’t want to get involved in immigration issues,” said Rick Eichstaedt, executive director of the Center. “Police have limited resources.”

Repealing sanctuary status also threatens public safety, Eichstaedt said. "We have citizens of Spokane who may be victims of domestic abuse who, because of their immigration status, won't call police.”

Experts generally agree sanctuary cities do not have higher crime rates than other cities. And police in cities like Houston and Los Angeles have also noted some Latinos have stopped reporting certain crimes, such as domestic violence, sexual assault and rape, because of anti-immigrant talk and a fear of deportation, which can make a city less safe.

The Los Angeles Police Department was the first in 1979 to implement a policy about not asking immigrants about their citizenship status. According to Gonzalez, the policy was not particularly controversial until the Central American refugee crisis of the 1980s when cities, in solidarity with churches and synagogues, began shielding asylum seekers.

After last week's contentious meeting ended without a vote on sanctuary status, Keller quickly sued the City of Burien and the City Council for failing to either put the ordinance detailing Burien’s sanctuary status on the November ballot or repeal it altogether. Because Respect Washington was able to gain the requisite number of signatures, those appear to be the city's only two legal options.

Some residents and City Council members, however, have raised issue with the way the signatures were collected, arguing some may have been misled or even intimidated into signing. Keller denies the accusations. “It’s just a bogus lie that someone under duress would go through all that to sign the petition,” Keller said. “The people who signed the petition know what their motives were.”

Keller, a West Seattle resident who has twice run unsuccessfully for Congress as a Republican, argues the residents of Burien have earned the right to vote on its sanctuary status. “It’s all about getting this question out to the voters,” Keller said. “It’s all about the will of the people being done here.”

The usual deadline for putting a measure on the November ballot has already expired. But Lisa Marshall, Burien's city attorney, said King County Elections staff have indicated they are still willing to work with the City Council.

If the City Council fails once again to either repeal Burien's sanctuary ordinance or vote to put it on the November ballot, the city and Respect Washington's Keller will head to court where, Marshall said, the judge will most likely force the council's hand. “We can either do this the easy way," Marshall said, "or we can do this the hard way.”

Whether Burien joins Spokane in a November vote, others in Washington will face a similar ballot measure if Respect Washington has its way. The group's website promises to launch a petition drive next January on a statewide ballot measure to "defend our communities from criminals unlawfully inside the U.S."