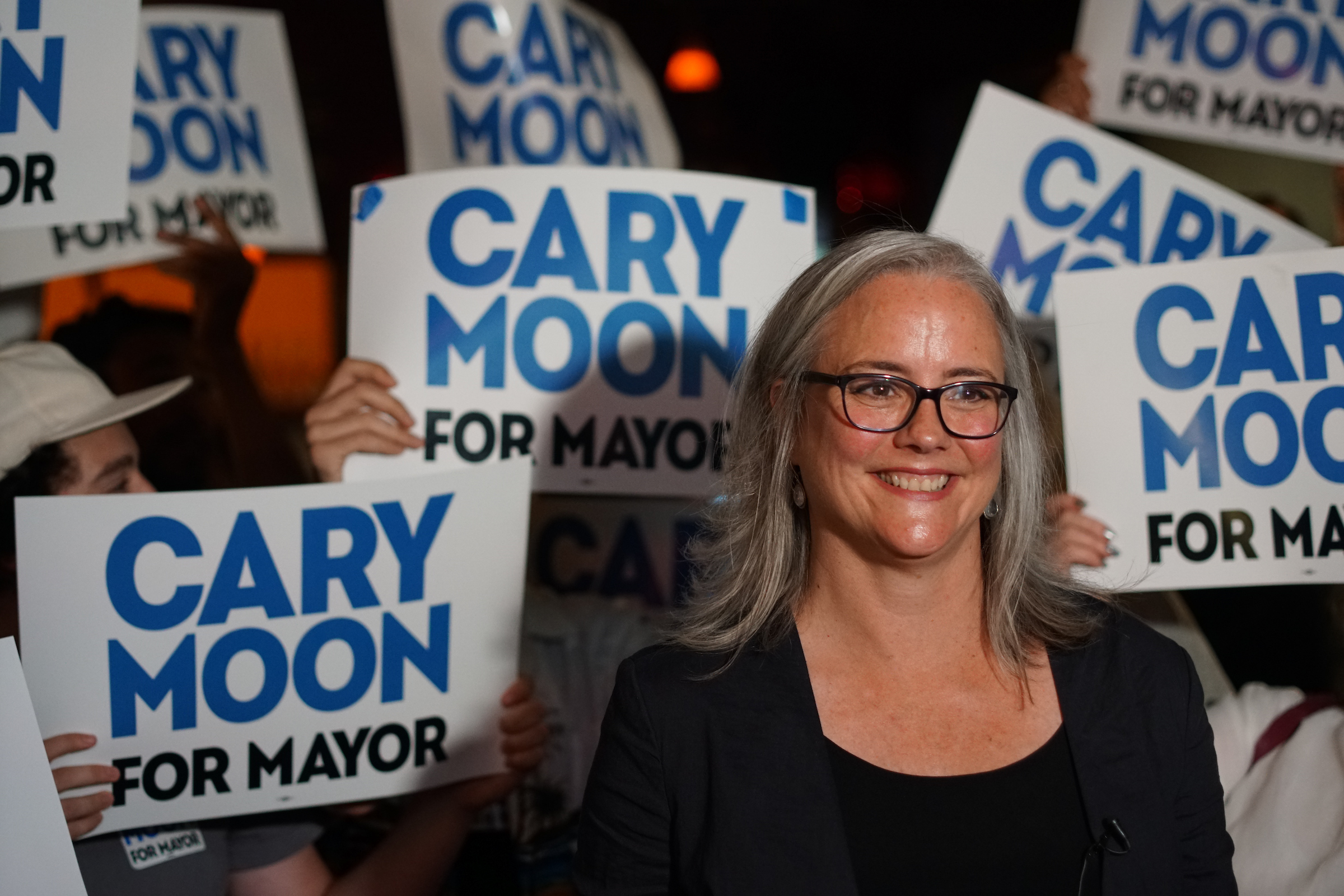 Cary Moon at the Cyclops restaurant in Belltown at her primary election night party on August 1, 2017.

In the latest round of election results Thursday, urban planner Cary Moon strengthened her hold on second place position over attorney Nikkita Oliver, widening her lead from 1,978 votes to 2,587.

The Thursday count was regarded by political observers as particularly important because it was the first indication of how late balloting went. Although Moon said in a statement she was not yet declaring victory, the new numbers make it much more likely she will advance to November’s general election to compete with former U.S. Attorney Jenny Durkan. Only two candidates from the primary will advance.

Durkan’s lead has shrunk by 1.39 percentage points since election night, but she remains dominant.

In the statement sent immediately after the results, Moon said, “Today's ballot counts look very good; we’re still on the right track to make it to the general election this fall and we are ready to confront the challenges facing our city — together.”

In the race for Seattle City Council Position 8, tenant rights advocate Jon Grant put some space between himself and his challenger, Fremont Brewing co-founder Sara Nelson, growing his lead to nearly 3 percentage points, a much more comfortable margin than his 1 point lead Wednesday. As a result, Nelson officially conceded in a statement Thursday evening. "While I am disappointed by the results, I am proud that our collective efforts garnered the support of almost a quarter of voters in this race," she said. "I said from the beginning that even if I lose, I will have started a conversation in Seattle and these results demonstrate that there is a place for the voice of small business in Seattle politics."

Grant will now face labor leader Teresa Mosqueda, the first place finisher in the voting, this fall. “I think it’s pretty on track with what we were anticipating,” he said of the results. “We’re really excited to advance into the general.”

The release of about 40,000 more votes is similar to what the county released Wednesday. However, Thursday’s ballots predominantly came from drop-boxes or late arriving mail-ins. These late ballots tend to skew more liberally and that was generally the case Thursday, as illustrated by Grant’s larger margin and the slight decrease for Durkan. 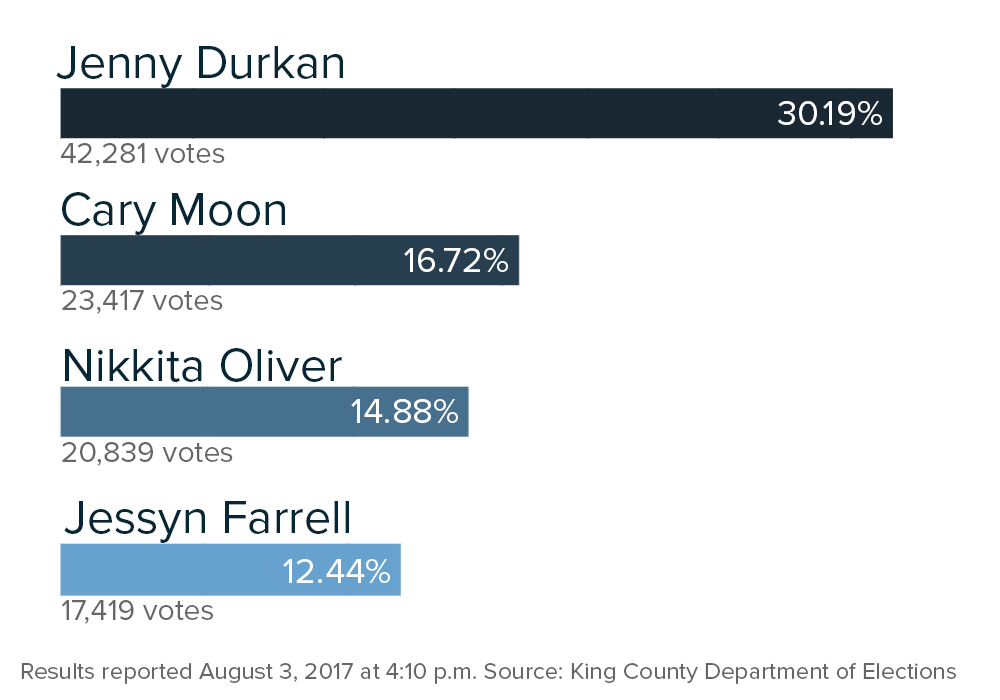 In keeping with that trend, both Moon and Oliver increased their total shares of the vote, to 16.72 and 14.88 percent respectively, which is to the benefit of Moon who simply needs to tread water as the rest of the votes trickle in. Fourth place finisher, former state Rep. Jessyn Farrell, increased her total vote share slightly, but did not gain on either Oliver or Moon. She could not immediately be reached.

A spokesperson from the Oliver campaign said they would wait until Friday’s release of more ballots before commenting.

King County Elections will continue to release new results into next week. As of 2 p.m. Thursday, Seattle voter turnout was running about 40 percent of the registered city electorate, reflecting an unexpectedly heavy surge of last-minute voting. Overall, 187,194 ballots had been returned at 2 p.m.; 142,556 have been tallied. Friday’s release is likely to be similar in size and from a similar pool of votes.

Earlier in the day, before the results were released, former Mayor Mike McGinn, who finished in sixth place, posted a concession to Facebook. “The election results were not what I was hoping for,” he said. “But I am tremendously grateful that I had the opportunity to participate in a discussion about Seattle’s future, as well as connect and reconnect with so many great people in Seattle.”

On election night, state Sen. Bob Hasegawa, who finished fifth, didn’t quite concede, but spoke about how, regardless of the final results, his campaign could serve as an example to others.

Meanwhile, the proposed countywide sales tax for arts and sciences closed its nearly 10-point election night gap significantly, now trailing by 5.5 percent.  Campaign spokesperson Jack Sorenson said they’re not going to call anything until the remaining votes have been tallied. “We’re gonna keep hanging tight and waiting to see what happens,” he said.

On the Eastside, the race for control of the state Senate was largely unchanged from Wednesday, with Democrat Manka Dhingra holding a 9-point lead over Republican Jinyoung Lee Englund.

The county will again release another large batch of results Friday afternoon.