Shakeup among Seahawks over Charlottesville 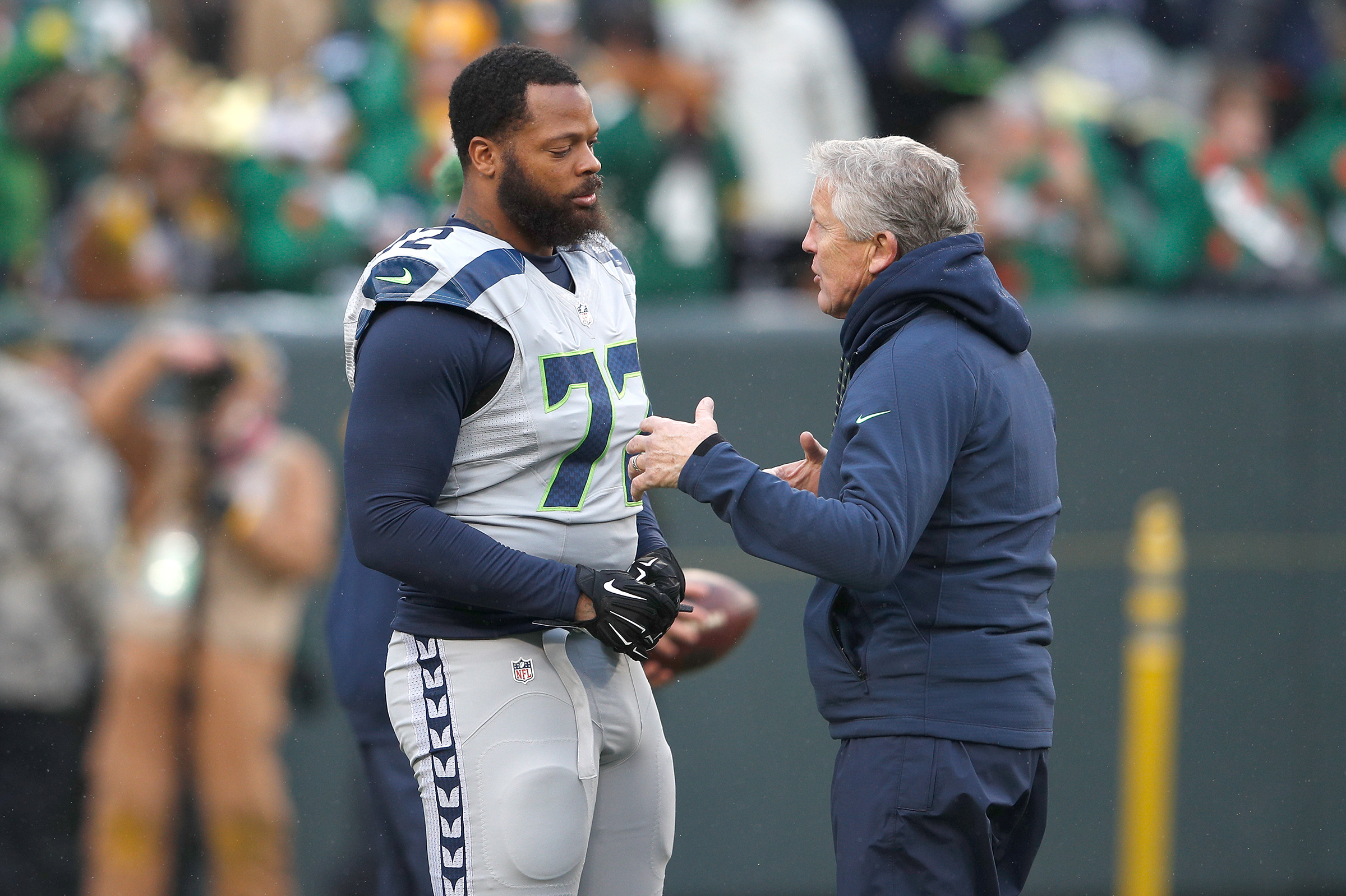 Add two more to the long list of people anguished over the grim, non-sports news of the weekend: Oday Aboushi and Pete Carroll. One was crushed to see his college hometown awash in hate and blood, the other surprised to see a player he thought he knew well fuel a national controversy by, without notice, sitting out the national anthem.

Aboushi, a University of Virginia grad who started at right guard Sunday in the Seahawks’ exhibition win after Charlottesville was churned by racial violence Saturday, said, “It happened in what I thought was the happiest place on earth. It was really shocking.

"Charlottesville was maybe the best four years of my life. The city was all about love and peace and unity — what UVa stands for.”

As the Seahawks stood Sunday for the national anthem at Stubhub Center in Carson, California, one sat down — defensive end Michael Bennett, a protest gesture Carroll, who prides himself on anticipating events, didn’t know was coming.

“This was a little bit of a surprise,” said Carroll, who admitted he didn’t agree with the gesture.

“I love our country and think we all should stand when the flag is up,” he said, but he remained supportive of Bennett. “He’s in a great place and will do great work well after his time in football; it’s easy for me to support him. I think we should all be standing up.”

To illustrate how the non-sports developments from the national fracture creep into sports, wide receiver Doug Baldwin seemed to side with Bennett.

“I thought he did an excellent job ... in his response after the game,” said Baldwin, who has worked as a liaison between community groups and police on social justice matters. “I was really proud of him. And I think we, as a society, should be proud.”

Will Baldwin think about joining Bennett, who said Saturday he plans to continue the anthem sit-out on Friday when the Seahawks host the Vikings at the Clink?

“Absolutely,” he said. “We are going to have a conversation here shortly. We try to do things as a team and as a family. We will see how we can support Mike in this situation.”

Baldwin’s disclosure suggests the team may revisit a similar circumstance from last season, when San Francisco quarterback Colin Kaepernick touched off a national furor by sitting for the anthem before a 49ers game. The Seahawks held a team meeting to discuss a response and came up with a unity gesture of locking arms during the anthem, which some outside the team criticized as pointless.

“We’re sitting here having a conversation about whether it’s important that a guy stands or sits, when the topic is inequality or injustice. I look in the stands and some of our games both home and away and I see people who are drunk with their hats still on [during the anthem and] yelling. How come you guys aren’t talking to them? How come there’s not a discussion about that?"

He said his teammate, “is taking a reasonable and peaceful approach to something that is [vitally] important to our society and the health and wellness of our communities.”

Carroll said he and Bennett have talked twice, and praised his star pass rusher for his world view and actions.

“We’ve been working a long time together, on and off the field, in great depth,” he said. “He’s really dedicated the past few years of his life to what’s going on around the world. He’s traveled everywhere to try to understand people’s issues and concerns.

“It’s captured his heart. He’s doing everything to help where he can. I support the heck out of his issues and concerns.”

Meanwhile, Aboushi, born in Brooklyn as the ninth of 10 children to Palestinian immigrant parents, was trying to grasp what happened in a part of his world.

He is among the few practicing Muslims in the NFL. Muslims were among the minorities castigated by white supremacist marchers in Charlottesville, which prompted a counter-protest. The clash left one person dead and 19 injured after a man suspected of pro-Nazi allegiance drove his car through a crowd of counter-protesters.

Aboushi was stunned at the contradictions.

“We had a big international section,” Aboushi said of Virginia during his four years there through 2012. “Everyone was treated the same, whether Muslim, Christian, Jew — everyone was given the same opportunity.

“[Ethnicity] was never an issue. We were part of a team with players from all backgrounds, places and countries. Being a tolerant school like Virginia, they look for people who are different. Being the same isn’t always a cool thing there.”

He supported Bennett’s post-game explainer about his anthem sit-out. Bennett, by the way, was scheduled to be interviewed Wednesday by Jake Tapper on CNN.

“To happen in Charlottesville in 2017 — definitely shocking, eye-opening,” he said. “It showed that we have a long way to go. It’s not up to anyone but us to change.

“Like Mike [Bennett] said, we have to understand that people are different, but it doesn’t mean they’re bad. Because you eat something different, you dress a different way, doesn’t mean you’re necessarily bad. He’s right to step up and take on issues, and learn the differences.”

Given the daily drama in Washington, D.C. — that so far appears to be invigorating the white nationalist fringe — the impacts on sports, teams and players are impossible to avoid, as Aboushi noted. Carroll typically revels in the handling of social issues among young players, and sounded determined to avoid corrosive consequences.

“We are not scattered and disconnected,” he said. “By the same token, these are young men growing up trying to find their message, their heart. I couldn’t support that more.”

But Carroll doesn’t like surprises, even from players he respects. Then again, he and Aboushi join most of the rest of the world in seeking respite from surprise.