The Tacoma artist who is reframing how we see Black bodies 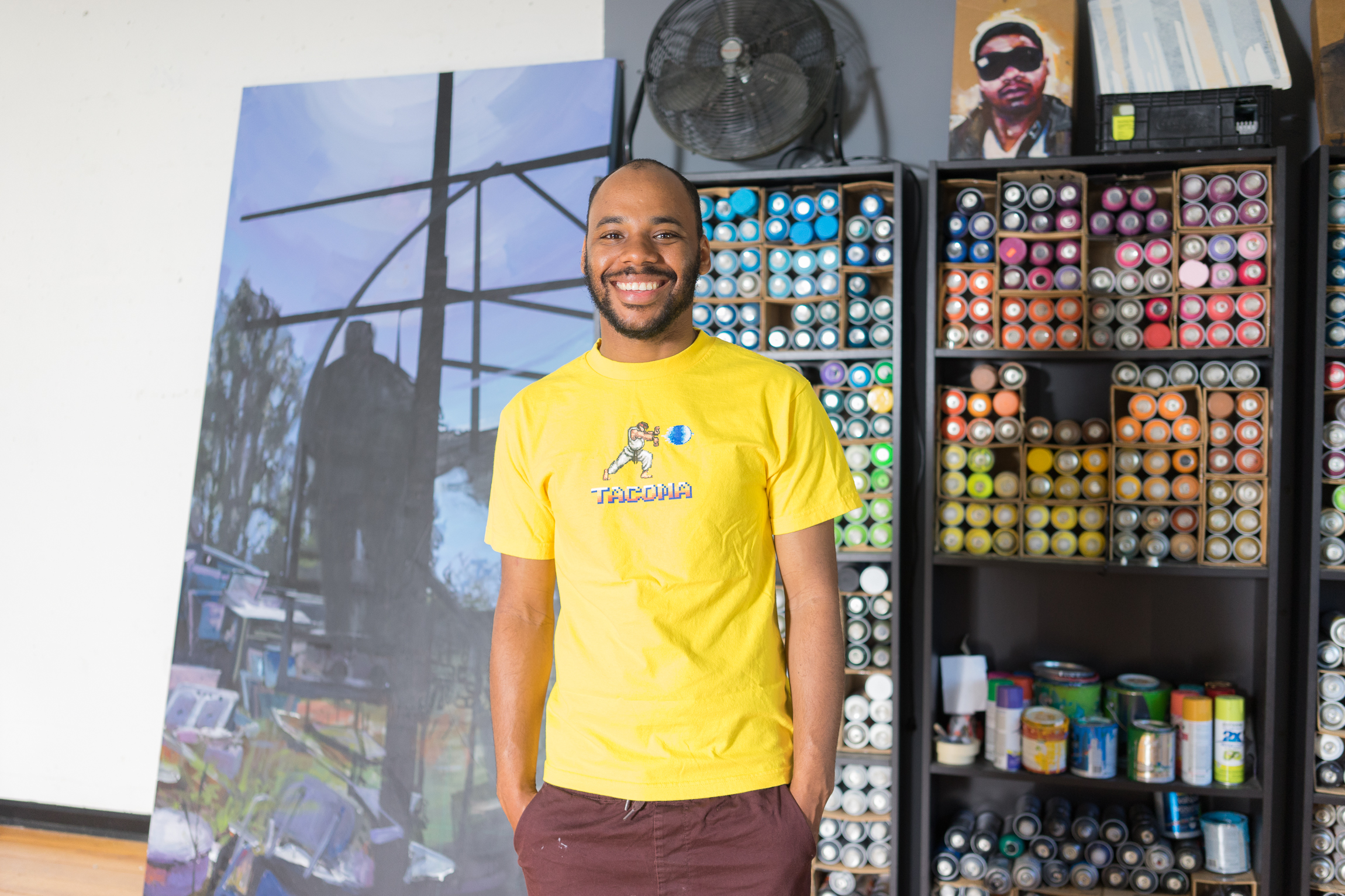 Tacoma artist Christopher Paul Jordan is inverting the world, one artwork at a time. He merges digital art with photography and paint. He uses iPhone technology to literally change how we see colors—white is now black.

Just last week, Jordan nabbed one of the state's biggest prizes for artists: a $25,000 Neddy Award in the painting category (Che Sehyun won in the open medium category). Jordan is one of the youngest Neddy winners, the only Tacoman in the award’s 21-year-old history and one of just two African-American winners.

“Winning the Neddy is a huge affirmation of what I’m doing,” Jordan says. “I’m trying to break the fourth wall in painting, to get people to take responsibility for their reactions.”

Sitting on a faded sofa in his downtown Tacoma studio, Jordan doesn’t come across like a revolutionary. Genial and thoughtful, he seems much older than 26, especially when you look at his CV: multiple awards; upcoming residencies in Vermont and at the Museum of Glass; nearly a decade of making public art and teaching; several commissions and exhibitions. 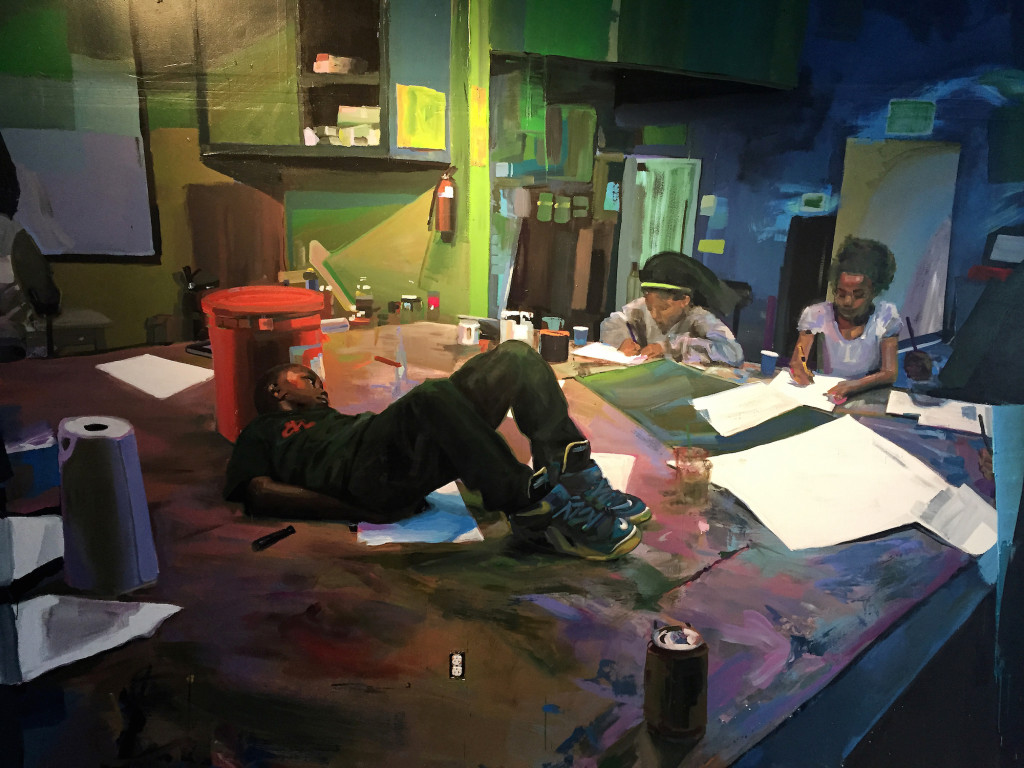 But as he flips through images on a paint-spattered laptop, he speaks passionately about what drives him: community, belonging and the need to rethink the way we see Black bodies.

“Like this,” he says, pulling up a shot of a mural done for Art Basel Miami in 2015. Three Black schoolchildren sit in a classroom looking intently at each other. The image features Jordan's signature style of abstract color fields and overlapping shadows.

“People go to so many different places as to what this is about: it’s about the education system, it’s about government,” Jordan says.

Actually, it’s just three kids painting each other in a class Jordan taught in St. Augustine, Trinidad. But like his 2016 mural for King Street Station of a similar group of Tacoma kids, it triggered a wealth of interpretations—and misinterpretations. (Jen Graves, former art critic for The Stranger, initially wrote that the boy reclining as a model represented a corpse.)

“People project narratives onto bodies, especially Black bodies,” Jordan says. “White and Black people. And some people don’t have enough exposure to counter what they see.”

So, Jordan is setting out to provide a counter-narrative—insisting, simply, that Black bodies be seen. In late 2015, he was among those who protested the lack of Black artists in Tacoma Art Museum’s “Art AIDS America” show. In response to the TAM show, Jordan painted a Black female body obscured inside a painted resin collage.

Last December he organized “#COLORED2017,” a huge Tacoma show that included Black artists from across the country and Caribbean. It drew the Black community together in a way that enabled both artist dialogue and community understanding.

“The community is really pleased to have someone of color listening to them and representing them,” says Virginia Hankins, a 71-year-old Hilltop resident who helped organize the People’s Community Center mural Jordan designed last year.

But maybe Jordan’s most innovative technique is color inversion, which is devastatingly simple: he changes the color of photographs using the color inversion setting on his iPhone. He paints what he sees in a visual language that combines the figurative with the abstract; visitors can best appreciate the artwork by viewing it through their cell phones. He first used this technique for “#COLORED2017” and he's using it for “High Jump,” the mural he’s painting on the SODO Track in Seattle.

The color inversion artwork is stunning. On a huge SODO wall,  a radioactive-blue figure is poised, leaping over a high jump bar against a pumpkin-colored background. Seen through an inverted-color phone camera, the art emerges as a Black athlete soaring through a blue sky.

“With phone inversion, you become aware of multiple ways of seeing,” says Jordan. “It’s not about having the right image, but having the humility to rethink.”

The other surprise from Jordan’s CV is the fact that until three years ago, he didn’t even paint with a brush.  Most Neddy winners are established artists with at least a decade of professional work behind them. A decade ago, Jordan was a high schooler at Tacoma’s School of the Arts. He’d gone there fascinated by digital art, which he’d discovered while designing websites. He also reunited with middle-school friend Kenji Stoll, a graffiti artist who taught him how to spray paint.

They began collaborating on murals around Puget Sound and teaching art to underserved youth via the nonprofit Fab-5, which Jordan now co-directs.

“Suddenly I could put art in the physical, real world,” Jordan says with a smile. “It took over!”

Jordan started to merge digital art with photography and murals, exploring how public art could connect a community. He studied digital art and sculpture at Pacific Lutheran University.

“He’s a very sophisticated artist with a lot of ideas,” says Bea Geller, assistant art professor at PLU. “I was impressed by his unorthodox solutions and thinking.”

Jordan never finished his degree. But the experience afforded him something else –a study-abroad trip to the University of the West Indies in Trinidad. He became aware of how Afro-Carribeans and Indo-Carribeans see the world. He also learned how to paint with a brush and not just with a computer.

“They didn’t have that much technology,” explains Jordan. “So, I had to learn.”

Jordan began to develop a self-taught painting style that merges the portraiture of photography with the layers of digital collage and the ambiguity of paint.

“Painting is like an incredible moment in a library where you take all the fiction and nonfiction books and take off all the labels,” he says. “With a photo, you have (certain) questions. When I paint, I want to ask a different set of questions that I don’t fully know how to answer yet.” 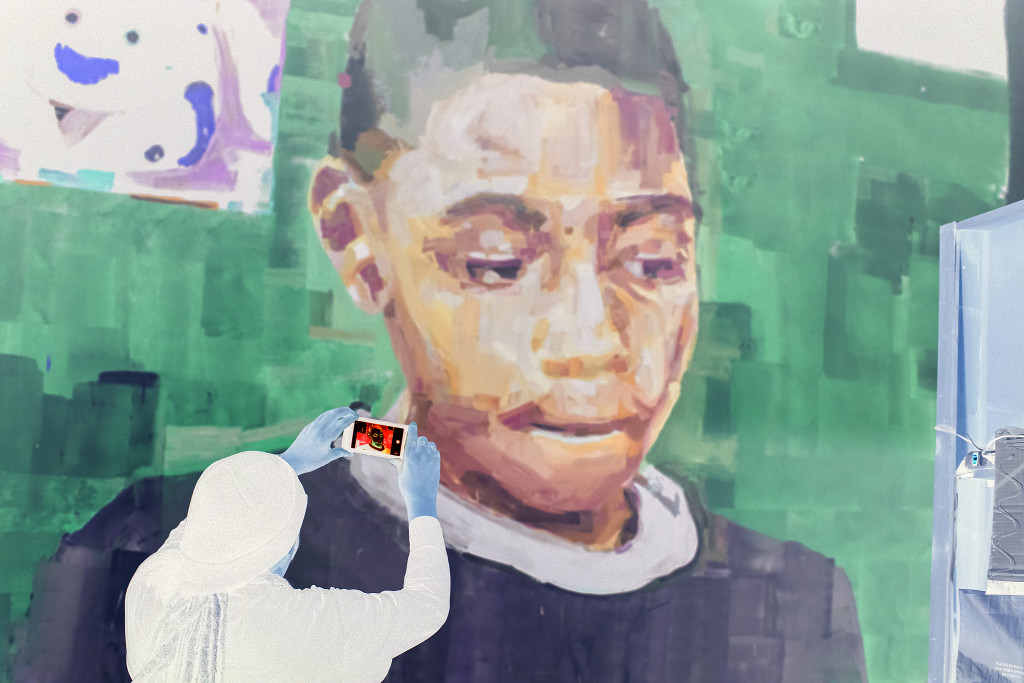 The art of belonging

But the third driver of Jordan’s art, after black identity and merging media, is exploring the theme of belonging.

Seattle Art Museum’s Olympic Sculpture Park houses one of Jordan’s most recent works. "Latent Home Zero" looks like one of those old-school tower viewers, the sort you might encounter at a national park. It points out toward Puget Sound. You look through it to suddenly find a rotating carousel of 3-D photographic collages that have nothing and everything to do with the Puget Sound landscape in front of you. Water, trees and grass frame a Black woman clad in flowing white who is spreading a deep-blue cloth before a full moon.

Inspired by African Yoruba rituals, it is a response to the African-American history of forced migration that began with slavery and continues with gentrification.

“(Black people) have been everywhere in this country and never belonged anywhere,” says Jordan. “What does it mean to belong?”

Jordan grew up one of six children on Tacoma’s Hilltop after his father, a pastor, moved the family from Florida to take over a tiny Tacoma church in the '80s.

“I grew up in an ultra-conservative home in a liberal state, in a very black neighborhood that was in a very white region,” Jordan says.

Now, because Tacoma is becoming increasingly more expensive to live, Jordan is the last one of his family left in town.

“The phrase ‘home court’ has implications of advantage, of belonging,” the artist says.  “In all of this structural and cultural displacement, it’s making a statement about who we’re invested in.”

Art as game-changer. Which is very Chris Jordan.

Artwork by Christopher Paul Jordan on view to the public includes “Latent Home Zero,”  now at SAM's Olympic Sculpture Park through Oct. 17; “High Jump,” on the west side of the SODO Track, just south of Safeco Field;  “Home Court” on South G Street between 23rd and 25th Streets in Tacoma and “Latent Home” at the Kittredge Gallery at the University of Puget Sound, Nov. 13-Dec. 9. Find #COLORED2017 online and at chrisssjordan.com.

Rosemary Ponnekanti is a freelancer for Crosscut. She lives in Tacoma, plays double bass and does aerial circus. Find her on Twitter at @roseponnekanti.