The Trump effect: How it's playing out in our local elections 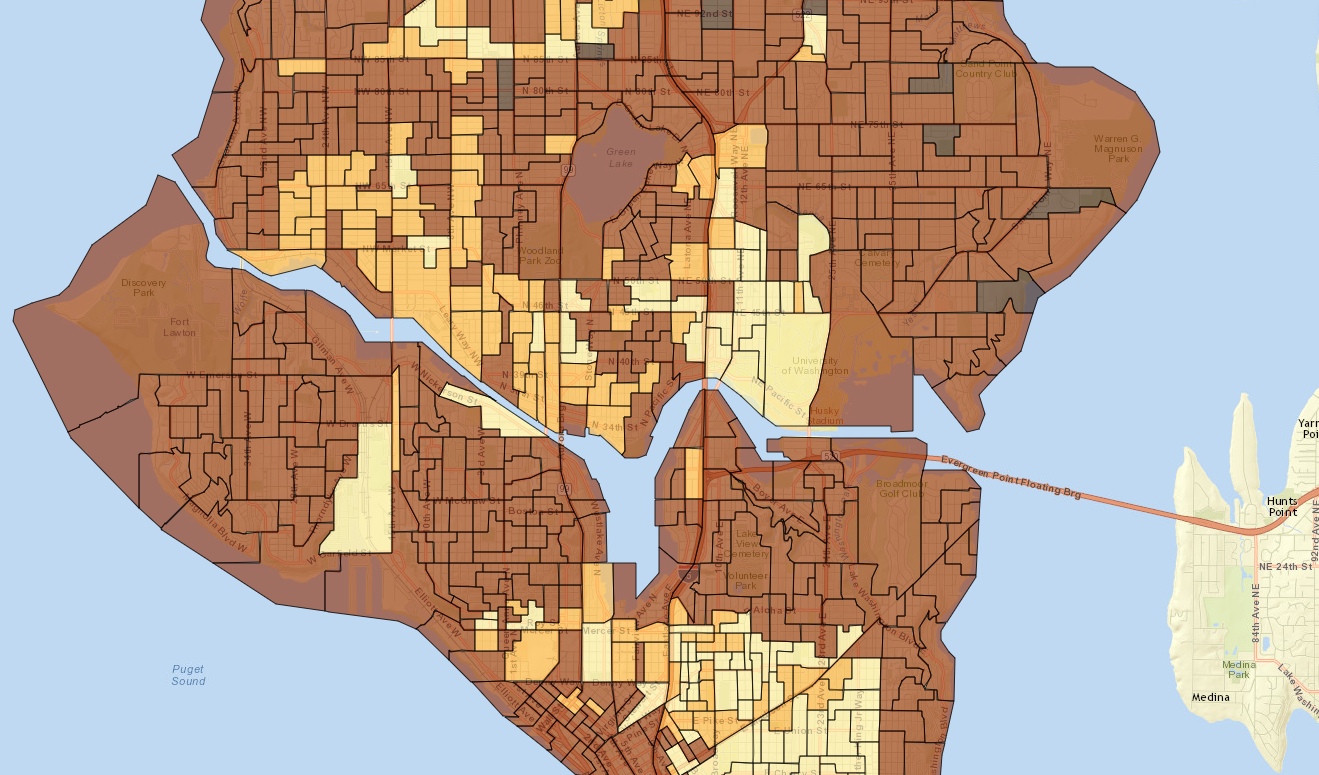 A snapshot of the interactive Mayoral Primary Election results map, which can be viewed in full below. All maps by Joseph Liu/KCTS 9

It took Donald Trump to politically unify King County, but it didn’t last.

Following last year’s presidential election, speculation ran rampant about whether President Trump —who received a thudding 21 percent of King County ballots — would change local elections. Perhaps, some reasoned, Trump would galvanize local Democrats into supporting progressive firebrands. Or maybe King County’s affluent Eastside, which rejected Trump by a 3-to-1 margin, would finally cement into a Democratic stronghold on the local level. Local political drift often trends toward the glacial, but could Trump be a transformative figure?

In the end, it appears not. Regional divides in King County and Seattle remain. While conservatives still struggle locally, they don’t face Trumpian challenges. “Center-lane” candidates continue to be competitive in Seattle politics.

National politics may be at its most tribal in recent years, but an analysis of the August primary results suggests that they are nudging, rather than transforming, local political change.

With the final results from throughout the county available, let’s look — with the help of Cascade Public Media graphics whiz Joseph Liu — at a fully interactive map that shows how King County’s politics are changing — and how they’re staying the same. The fully interactive map is a great way to see the trends in your neighborhood and beyond and to look at the factors that will be in play in the Nov. 7 general election.

We earlier examined the preliminary results from Seattle’s mayoral race. Today, we expand the analysis to more key races for November, while adding some further thoughts about the mayor’s race.

Geographically, turnout was boosted by a special legislative election in the Eastside’s 45th District with 41 percent turnout there (more about that race below), and in Seattle just over 40 percent. The region’s turnout champion was Trilogy at Redmond Ridge, a large retirement community in the 45th District, where 71 percent of voters returned ballots.  Countywide, 57 percent of voters over 65 voted. Older, homeowning neighborhoods drove turnout in Seattle, as well. Top showings went to the Lakewood/Genesee Park neighborhood in South Seattle (55 percent), Madrona (55 percent), and Magnolia’s Briarcliff (54 percent).

At the other extreme, areas with lots of young, transitory voters scored lowest. Only 11 percent of voters on the University of Washington campus returned ballots. Other Seattle lows included Interbay (18 percent) and Pioneer Square (19 percent). Outside of Seattle, a lack of compelling local races dampened turnout in parts of South King County, especially Algona (19 percent) and Pacific (18 percent).

In the earlier article, I argued that the results indicated potential trouble for frontrunner Jenny Durkan. When the final results were counted, Durkan’s vote fell slightly from the early returns, with runners-up Cary Moon and Nikkita Oliver increasing their showing. With Moon now confirmed as Durkan’s fall opponent, it’s worth noting that Moon will face her own challenges in trying to overcome Durkan’s 10 percentage point margin of victory. Oliver recently announced that she will vote for Moon, but not endorse, expressing concern about a race that features only two wealthy white women. While most Oliver diehards will likely end up in Moon’s column, it’s worth noting that Oliver picked up a substantial non-white vote, especially in precincts with lots of black voters. Historically, the non-white voters in Seattle have not broken heavily for either left-lane or center-lane candidates. There’s a lot of Nikkita Oliver strength shown in South Seattle on the map, and those voters are far from a lock for Moon. Center-laners remain in the hunt in Seattle.

All told, Mosqueda seems well-positioned for the November general election. While Grant received mostly left-lane votes, Mosqueda received a mix of progressive and center-left voters.  She is likely to pick up most Nelson voters and the majority of eliminated candidates. Still, Grant’s energetic grassroots campaign — plus a younger general election electorate — could keep this competitive.

Every time a Seattle or King County tax measure loses, people ask whether it’s a sign of tax fatigue. Certainly, rising tax rates don’t help revenue measures like Proposition 1, but you have to put them in context. Proposition 1 was an arts measure floated in a time of high national uncertainty, when few voters would likely list arts as a top-10 priority. It was opposed by the Seattle Times and the opposition Voter’s Pamphlet statement was co-signed by Democratic County Councilmember Larry Gossett. If this measure had failed miserably, perhaps renewed talk of a tax rebellion might be in order. But, to me, this all seems like a recipe for the narrow loss (49.1 percent) Proposition 1 received.

The pattern on this one was typical for a losing measure, with affluent voters and lower-middle-class Democrats defecting. The measure’s best showings were Vashon Island and Seattle (both 64 percent) and White Center (53 percent). However, it failed to hit 40 percent on the Eastside and got punishing results in exurban areas like South King County’s Lake Morton-Berrydale (20 percent). On the plus side, the measure was saved from a rougher performance by a good showing among lower-income urbanites in areas like the Rainier Valley, usually a group more wary of tax measures.

If you had to pick out one sign that local elections are being “nudged” by Trump, the special election for the balance of power in the state Senate would be it. This is a well-to-do district containing parts of Kirkland, Redmond and Sammamish, as well as commuter exurbs around Woodinville. The area has been drifting Democratic for years. Last fall, 2012’s respectable 40 percent showing for Mitt Romney collapsed into a terrible 27 percent for Donald Trump.

But with the Senate seat held by the late moderate Republican Andy Hill, the 45th has thus far remained very competitive on the local level, despite the presidential votes. If the 10-point primary win for Democrat Manka Dhingra is any indication, that may not be true anymore.

Dhingra, with 51 percent of the vote to Republican Jinyoung Englund’s 41 percent, won in most parts of the district. She had strong results in Redmond (58 percent), Kirkland (56 percent), and even Sammamish (51 percent), which was Republican as recently as the George W. Bush years. Englund’s key areas of support? Areas around Sammamish’s Sahalee Country Club (56 percent), the seniors-only Trilogy development at Redmond Ridge (50 percent), and a sparse slice of countryside around Duvall (55 percent). Even Union Hill — home to million-dollar mini-estates aplenty — tilted Democratic. Behold the Republican Party’s challenge in the Seattle suburbs in a nutshell.

A 10-point win isn’t enough to close the books, but this will be a tough one for the GOP. While the effect of national politics may filter down to the local level slowly, it matters. Without the 45th District seat, Republicans would likely lose control of the state Senate to the Democrats, who already control the state House and the governorship.