What to see at Seattle Art Fair? Some insiders' picks 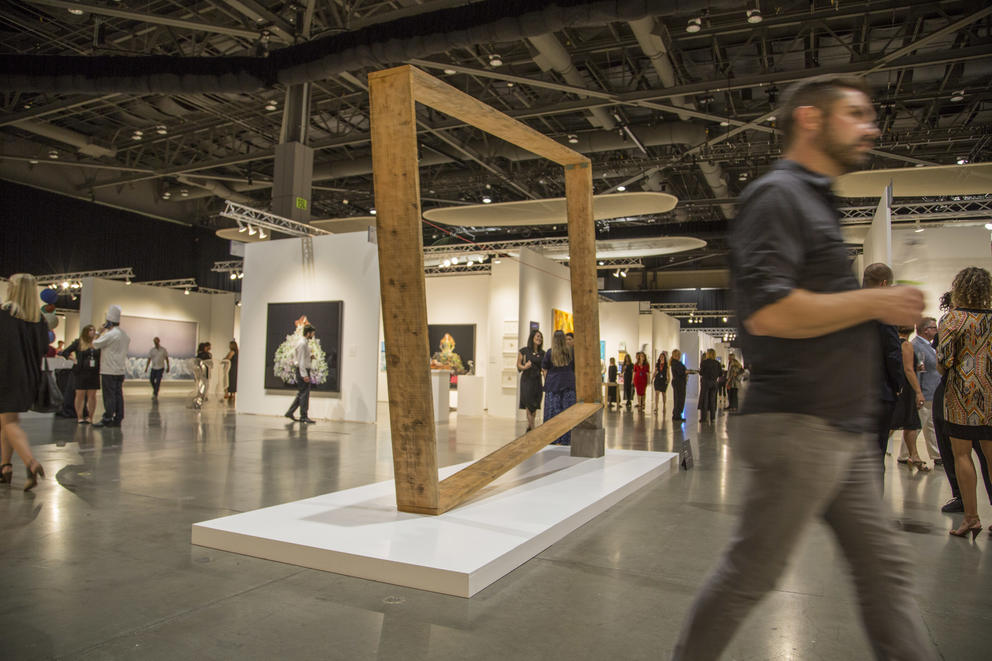 For the third year in a row, the Seattle Art Fair will take over the CenturyLink Field Event Center

This is The Year of the Round Number at the Seattle Art Fair.

Exactly 100 art galleries are taking part this year, up from 62 galleries in 2015 and 84 galleries in 2016. Art Fair director Max Fishko, in a phone interview last week, said he and his selection committee received roughly 250 applications to fill between 90 and 100 booths.

“We wound up with 100 on the nose — which, I have to admit, was particularly satisfying,” he said.

Fishko’s Brooklyn-based company, Art Market Productions, coordinates half a dozen art fairs a year and Fishko spends much of his time on the global prowl, seeking out new arts talent.

“I go to all the other art fairs,” he said. “I try to connect with the right people to get involved in the project.”

For the 2017 Seattle Art Fair, he looked with particular interest in the Japanese art scene.

“I think now we have maybe fifteen galleries that are coming from that part of the world.  A lot of energy went into making that happen.”

But it isn’t just the art that has Fishko buzzed this year. There are, he says, some “amazing collectors” who have plans to attend the event. That may come as a surprise to Seattleites who assume we’re a second-tier city when it comes to the wheeling and dealing of the international art scene.

“That’s really the most satisfying element because when that begins to happen and you begin to have that feeling like everybody in the art world is going to be in Seattle in August, that’s when we really feel like we’ve been successful.”

So what are local curators and artists most looking forward to seeing or experiencing at Seattle Art Fair 2017? Here are some of their edited answers sent via email.

“I am excited that there are quite a few galleries from Asia this year.”

Other items on her list to see include Jeffrey Gibson’s installation “Like a Hammer” (“his multi-media work brings a new perspective on Native American identity”) and a talk by Oscar Tuazon and Jennifer West (“two one-time Seattle artists who have developed national and international careers”).

She’s also glad to see the “big guys” taking part in the fair, chief among them being New York’s Gagosian Gallery, which is back after skipping the event last year.

“Our Northwest artists and galleries put on a strong showing at the Art Fair — both in the Fair itself and in the many satellite projects nearby, including Out of Sight.”

“The Frye is a cultural partner of the fair, and is co-presenting Brennan Gerard and Ryan Kelly’s new video installation, ‘Modern Living,’ which is at the top of my list.”

“Modern Living” is “a choreographic, two-channel installation” featuring dancers from the L.A. Dance Project moving through two celebrated architectural spaces: Philip Johnson’s famous Glass House in Connecticut, where he lived with his longtime companion David Whitney, and the R.M. Schindler House in Los Angeles, site of an early experiment in communal living. The film addresses questions concerning “the livability of queer space – its pleasures, tensions, and impossibilities.”

Donnan also looks forward to Erika Vogt and Dylan Mira’s project, “Pool,” which will turn Union Station into a combination train station/bathhouse. According to the SAF website:  “The public is invited to lounge in an installation of sculptural platforms referencing spa materials, ancient baths, architectural models, memorials and spells while a specially formulated herbal mist spreads through the space.” (No mention of whether visitors need to bring their own Turkish towels.)

Vrijmoet is looking forward to seeing Franz Kline’s work at Allan Stone Project (“His paintings fix me in place like a jolt of electricity”) and, in a more sedate vein, Fairfield Porter’s figurative paintings at Michael Rosenfeld Gallery.

“I like to get up close to the pieces, examine the brushwork/mark-making, light, and learn about the artists’ processes when possible.”

“The energy at the Fair is electric and inspiring. The satellite shows are also a great draw and showcase for our region. Of the many exhibitors I look forward to seeing, PDX Contemporary always seems to deliver the goods. A first among equals in this region.”

Humaira Abid, sculptor who will be having a major retrospective at Bellevue Arts Museum this fall

“As an artist, I look for unique voices, new media, different representation of materials and concepts. It’s an opportunity for artists to not just see works by other artists but also evaluate where they stand and make connections.”

“I look forward to strolling through the booths of the Pacific Northwest galleries, as well as visiting the exhibitions that will be popping up around town, to see how they portray our identity.”

Warashina, whose playfully pointed ceramic sculpture got the grand treatment in a retrospective at the Bellevue Arts Museum show a few years ago, says simply that she looks to the fair to provide her with “some inventive visual stimulation that will be hard to forget!”

Thomas, another renowned Seattle artist recently honored with a career retrospective at the Bainbridge Island Museum of Art, sums up wryly yet fondly, “The Seattle Art Fair is a great commercial and social opportunity for Seattle art and artists to meet and roll around with the rough-and-tumble larger world. I love seeing what folks are buying and selling — let’s be clear that is what it is about.  At year 3 our relationship is still new and shiny.  In this era of short attention spans, our challenge is to commit, keep it fresh and hang in there until the art fair is a time worn tradition.”

And what about the gallerists who have both a financial and reputational stake in the show?

Sure, they’d like to make some money. But there’s more to it than that, as gallerist Jonathan Wood of Seattle’s Abmeyer + Wood Fine Art, explains.

“I love seeing that ‘Aha!’ moment when a new viewer's eyes light up and they make a connection with the work,” he says. “They see something special about the artist or find something meaningful to them. This is fun when it happens in the gallery and being at an art fair you get to see this happen many times over. It makes my day!”

For an arts writer, going to the Seattle Art Fair is a bit like panning for gold. Here are ten guesses as to which booths will house the most beguiling treasures: