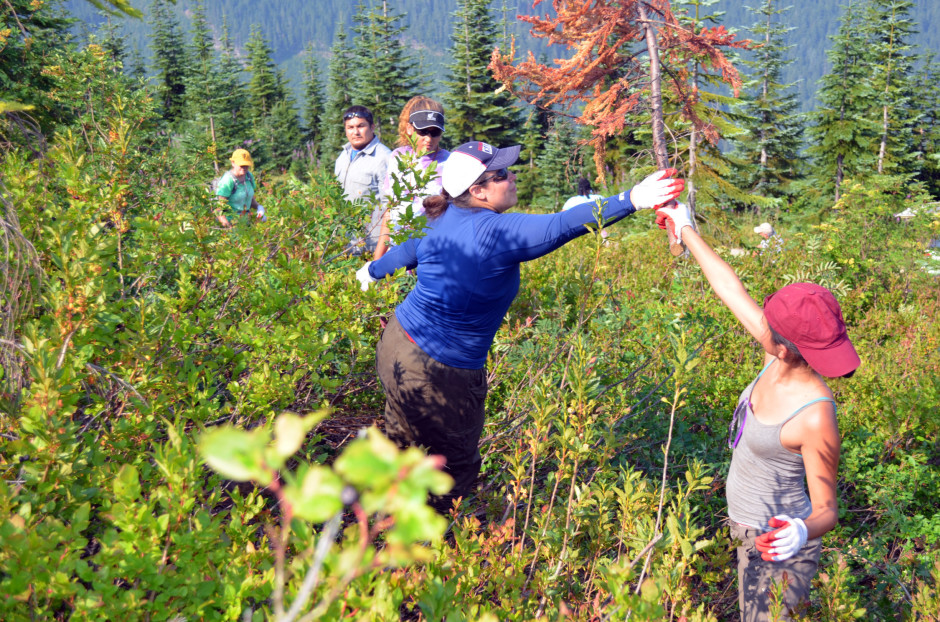 Tulalip teens are working to clear brush from a huckleberry field not far from the Skykomish River. Credit Eilís O'Neill/KUOW/EarthFix

When Inez Bill’s father died about fifteen years ago, she wanted to gather huckleberries for his funeral, so she headed up to Mount Hood.

“It was devastating,” remembers Bill, a member of Puget Sound’s Tulalip Tribe. “I would probably need at least 12 gallons for my father’s memorial. There was not enough. We didn’t even pick a gallon of berries.”

Traditionally, the Tulalip ate huckleberries — at home and in ceremonies — brewed tea from the leaves, and used the juice to dye their clothes. Huckleberries were abundant thanks to forest fires, which opened up wetlands and meadows and made space for short, shrubby plants that need the sun—plants like huckleberry bushes.

But, for decades the Forest Service has tried to put out fires as fast as possible, so there isn’t much huckleberry habitat left. That’s why the Tulalip Tribe is working with the Forest Service to recreate open patches in the forest.

Cathy Whitlock, a professor at Montana State University, looks at tree rings and lake sediments to study the history of fire. She says fire records don’t track the climate in the wet forests of western Washington and Oregon, which means people were setting forest fires.

“People were using fire for food-gathering and improving the berry-collecting,” says Whitlock, the director of the Institute on Ecosystems at Montana State. “They were using it to improve travel, for hunting.”

What the Tulalip are doing today is a little different.

It’s a hot, dry August morning, and a group of teens is gathered on the slope of a mountain not far from the Skykomish River. They’re wearing sunglasses and gardening gloves and grazing on huckleberries while they await instruction.

This isn’t just a chance for the kids to get involved in maintaining land for huckleberry habitat. It’s also an opportunity for them to taste the berries — often for the first time.

“I thought it was just a regular old blueberry and then I tasted it,” says 14-year-old Martel Richwine, a member of the Tulalip Tribe. “I was like, ‘Wow, this is more delicious than a blueberry.’ It had that little pop kind of like those little boba balls. It just has that little pop of that nice, sweet juice that you have.”

Now that the Tulalip can access this huckleberry grove, tribal elder Inez Bill says she has all the huckleberries she needs. Today, she and a coworker are brewing huckleberry tea.

“Knowing that we have an area that we can go into and to plan for future generations to have this area set aside for our use,” Bill says, that’s really what the Treaty of Point Elliott was all about.