A decade of Seattle street protests 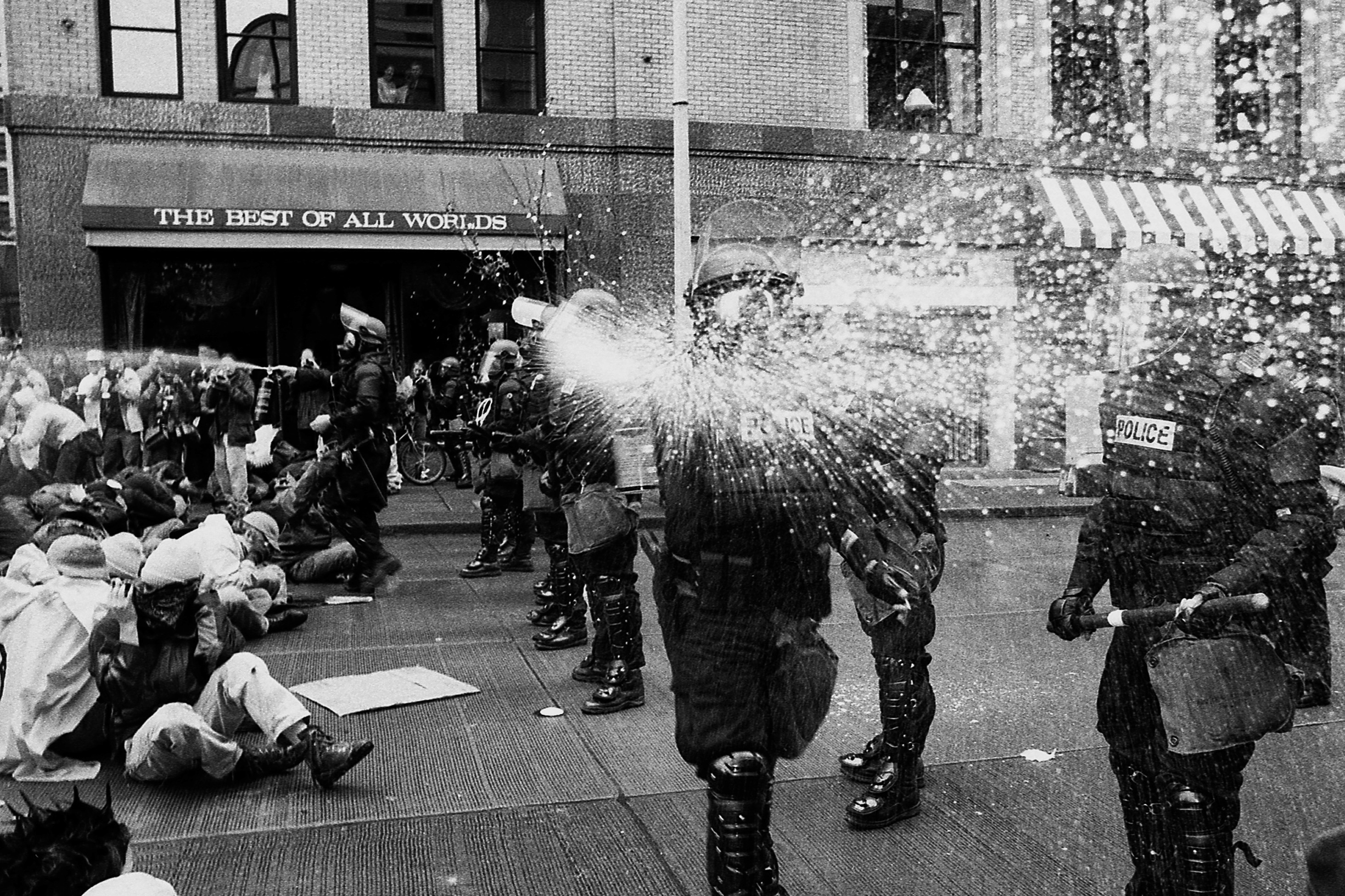 Seattle Police Department shoots pepper spray at George P. Hickey during an ongoing WTO protest in Seattle during 1999. Hickey was later awarded a settlement of $25,000 for the misconduct SPD perpetrated.

If you wonder whether one person can still make a difference, consider the case of George P. Hickey.

In 1989, Hickey, a middle-aged truck parts salesmen, moved to Seattle from San Bernardino, California, looking for a better life. His job here had him traveling around the region and seeing gorgeous scenery, so he went down to the late mecca for photographers, Tall’s Cameras, and bought a camera. It was a 35mm Pentax of the pre-digital age.

He took some classes from the University of Washington extension program, set up a darkroom in his apartment and began shooting landscapes. He quickly got bored. The world didn’t need another picture of a tree, he thought.

He stumbled across the newspaper Real Change in the mid-1990s, not too long after its 1994 founding. Hickey was interested in street photography, so he volunteered for the newspaper and for the next decade he became what Real Change founder Timothy Harris describes as “THE protest photographer in Seattle.” A man, according to Harris, with the combined skills of a camera nerd and a war photographer.

His steady persistence in photographing protests from roughly1994 to 2005 created a unique visual record that has resulted in a one-man show at the Washington State History Museum in Tacoma (Sept. 30 to Dec. 3) called “Loyal Opposition: The Protest Photos of George P. Hickey.”

Week in, week out, Hickey, who switched jobs a number of times over the years, documented animal rights, Gay Pride, and social justice actions, anti-war, WTO and May Day protests, and scores of other demonstrations in the city. He endured tear gas, pepper spray, police violence and hostility on a regular basis.

Hickey now lives in Olympia. He was driven out of Seattle, he says, by the Amazon tide that raises all rents. At age 69, he’s left his protest shooting days behind — he didn’t start shooting them until he was in his late 40s and now he’s concluded he’s too old for chasing black bloc anarchists. Besides, everyone has a smart phone with a camera these days.

But Hickey’s old-school collection fills a gap in modern protest coverage from a time before social media and iPhones. He has donated 11,000 black-and-white negatives and more than 600 prints to the museum’s collection. Selections from these form the basis of the exhibit and they are a powerful record of passion, activism and confrontation.

The money shot of the show, both figuratively and literally, was taken on Nov. 30, 1999 — the day anti-globalization forces shut down the World Trade Organization conference. A Seattle police officer is shown firing pepper spray at Hickey. The stinging spray is caught mid-flight by the photographer’s flash.

This was no accident. The officer is directing fire at Hickey, who was a credentialed journalist with SPD media ID. Hickey says the officer ignored nearby TV cameramen. “They’re sacred of the TV cameras, the police are,” he says. That’s because the officers don’t want their worst behavior on the evening news. In this case, Hickey got a full blast in the face, then the officer chased him and pepper-sprayed the back of his head and neck.

Scores of photographers were in the streets that day, but Hickey got one of the most emblematic shots. In the background is a gift shop with an ironic name: “The Best of All Worlds.”

Says Harris, “It’s a once in a lifetime photo” and it hangs in a Real Change conference room.

Beyond its symbolism, it paid off in cash because Hickey says he received a $25,000 settlement from the city for his mistreatment. A nice payout for a guy who did all his work for Real Change for free.

George does not fit the stereotype of a photographer of activism and social justice. He started at age 48. He sports short hair and a white mustache not unlike those worn by older cops and firemen. He’s a Vietnam-era U.S. Army veteran (he was a tank mechanic) and looks like what he was for some time: a Metro driver. He describes his politics as “liberal — left of the Democrats, right of the commies.” 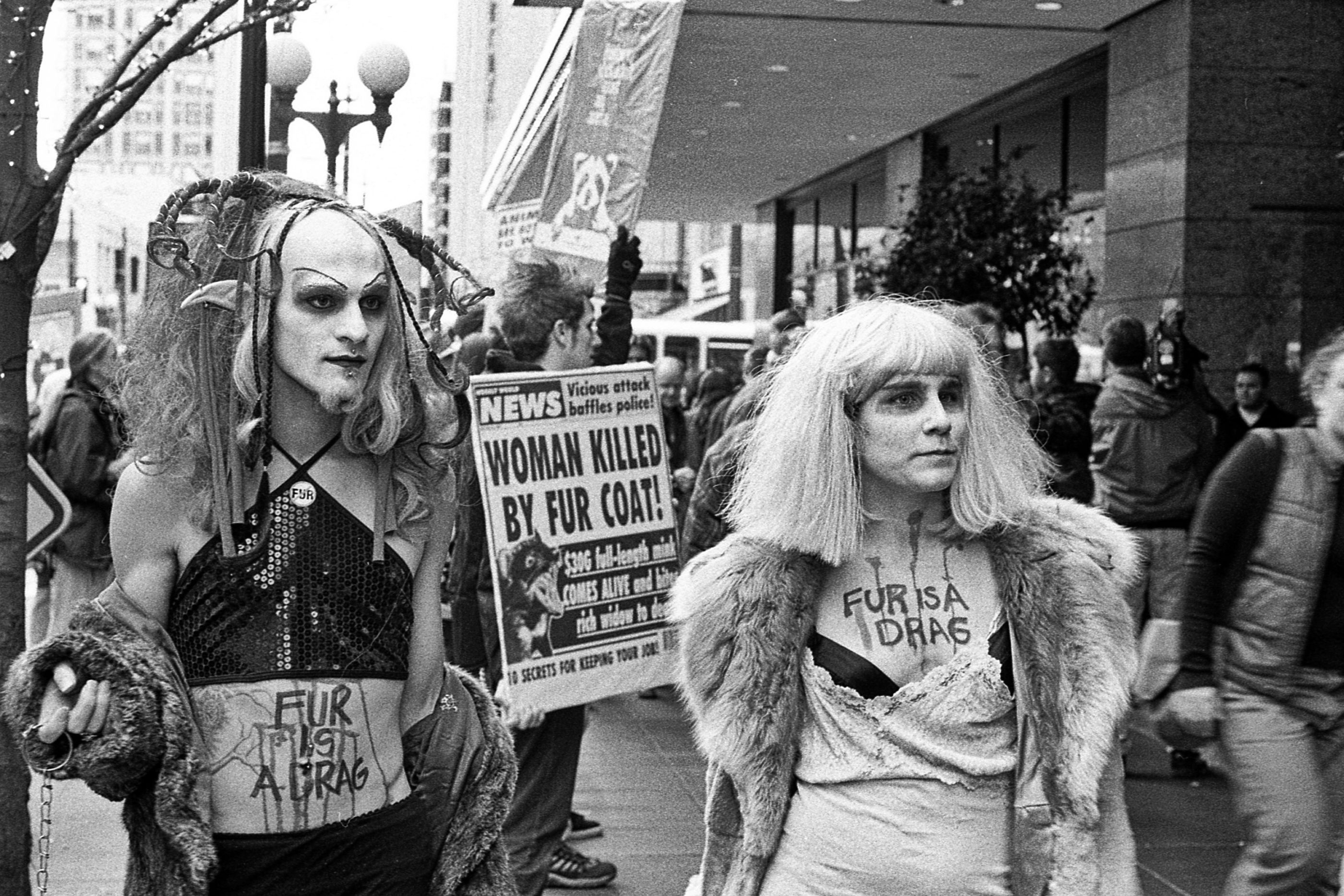 Hickey’s dedication — going to every protest he could — combined well with Seattle’s own mania to for getting out into the streets; sometimes, he said, he covered multiple protests on a weekend. Our street-level civic engagement is still robust.

Hickey’s photos capture the endless creativity of protesters, from drag queens and veterans for peace to anti-fur activists at Nordstrom on a Black Friday. One striking image is of a man protesting police surveillance by turning his head into a giant CCTV lens. In another, protesters are gagged and bound while wearing giant barcodes to protest the “corporate media.” Protest is a kind of performance art in which cameras like Hickey’s are essential to reaching a broader audience. Though often, Hickey’s camera was the only one at an event.

Hickey has thoughts about how protests have changed over time. After WTO, he says, the Seattle police got more violent and more confrontational, often roughly herding protesters, blocking streets and goading demonstrators with little reason save intimidation. Hickey says he got to recognize the police sergeants running the show, and came to be able to tell which ones were likely to be rough on protesters. Those tactics have eased a little, he says, because so many people record police behavior now.

From past protests, he has admired animal-rights activists who were always controlled and, in his experience, non-violent. He laments the tactics of some anarchist and antifa protesters who use peaceful crowds as cover for violence or vandalism. “Kiddies in hoodies hold no appeal to me,” he says, and he finds some of their behavior “cowardly.”

He still believes peaceful protests are necessary, however. “They have an effect, if not on politicians then on the people at home,” he says. “Violence allows the media to portray them as ‘the other,’ as anti-American, anti-patriotic rabble-rousers.” He believes even Donald Trump has been somewhat restrained by the power of protest.

In his images, Hickey has tried to show that folks in the streets are actual people, not cartoon images. “Protesters and activists are regular people who care about our country, culture, fairness and holding our political reps accountable.”

Thanks to Hickey, that message is now officially part of our state’s historical and visual record. And it is one well worth seeing. 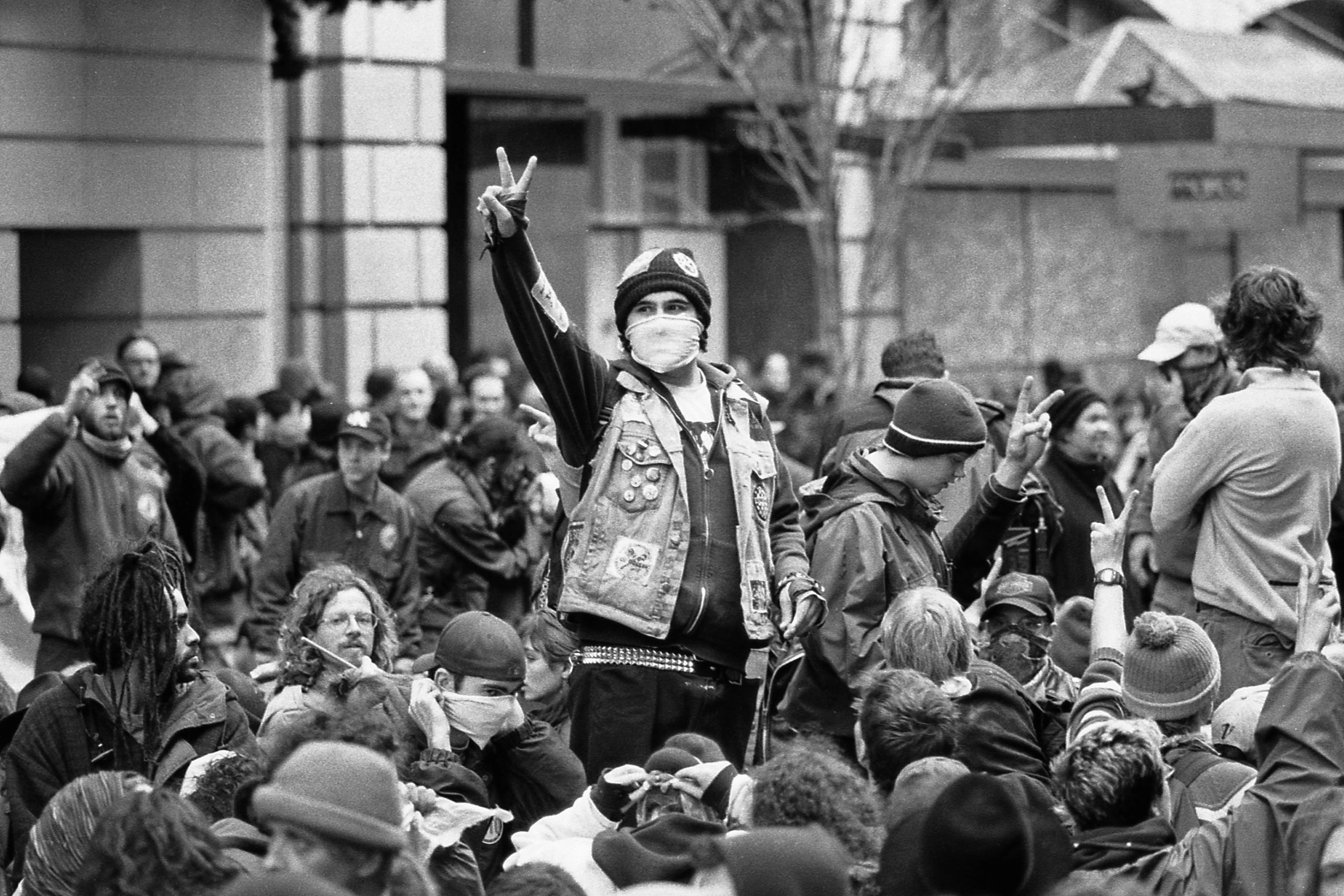